Since 2010, there has been a blanket ban on all prisoner voting. On Wednesday night, Parliament passed a bill that gives prisoners who are serving a sentence of less than three years back the vote. Here’s what you need to know.

As of March this year, there were almost 10,000 people in prison, 52% of whom are Māori. None of them are allowed to vote.

The ban on prisoner voting has been described by the Waitangi Tribunal as a breach of the Treaty, and as a key factor in lowering the number of Māori from the Electoral Roll.

Justice Minister Andrew Little introduced the Electoral (Registration of Sentenced Prisoners) Amendment Bill in February this year hoping it would give certain prisoners the right to vote – starting at this year’s election.

On Wednesday 24 June the bill passed its third and final reading, with 63 votes for and 56 votes against. This means 1900 prisoners will be able to vote in September.

What was the situation before this change?

The removal of prisoners’ right to vote came into effect in 2010 when National introduced the Electoral (Disqualification of Sentenced Prisoners) Amendment Bill. They argued that people sent to prison have breached a social contract with the state and should forfeit some of their rights because in order to reap the social benefits of a government, you must respect the authority of a government. As National MP Jonathan Young said at the time:

“This bill is essentially saying that for a person to participate in the election of lawmakers, that person cannot be a lawbreaker.”

The current Electoral (Registration of Sentenced Prisoners) Amendment BIll will overhaul this and return prisoner voting rights back to what they were in 1993, where certain prisoners will be allowed to vote, others will not.

What is the impact of prisoners not being able to vote?

Advocates say the law disproportionately affected Māori voters because they make up 52% of the New Zealand prison system.

A report by the Ministry of Justice shows a dramatic number of Māori have been removed from the electoral roll since 2010 as a result of incarceration.

If the 2010 ban remained, the report predicted by December this year 32,000 people would have been removed from the electoral roll in the last 10 years, 60% of them Māori.

A further report by the Waitangi Tribunal found that no matter how much people tried to engage with former prisoners once they were back in the community, it had little to no effect on re-enrolment.

This means “the legislation operates as a de facto permanent disqualification due to low rates of re-enrolment amongst released prisoners,” the report said.

For non-Māori, the number only doubled - from 26 people before the law changed, to 60 people after.

It’s an amendment to an existing law (Electoral Act 1993) and has been divided into two parts:

Part one: Disqualifications for registration

This amendment will give the right to vote to prisoners who are serving a sentence of less than three years.

But a ban on voting will remain on prisoners who are:

This makes prison managers responsible for getting inmates enrolled to vote.

Prisoners who are serving a sentence of less than three years and are qualified to vote:

Prisoners who are being released after a sentence of three years or more and are qualified to vote: 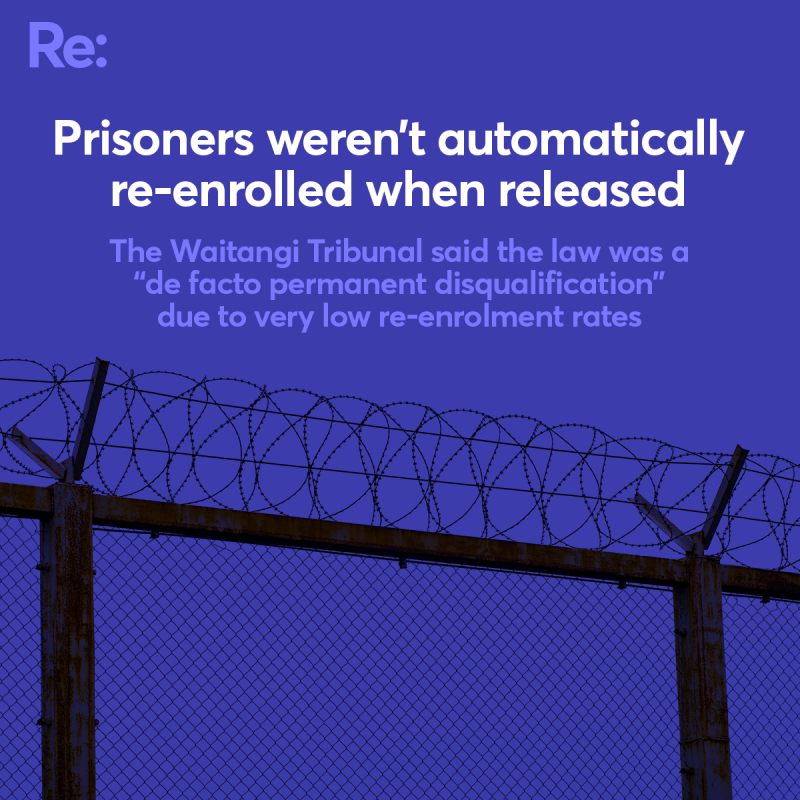 The Waitangi Tribunal found the prisoner voting ban was a violation of the Treaty.

“By failing to consult Māori and providing inadequate advice,” the report said, “the Crown failed to actively protect Māori rights under the Treaty.”

As a solution, the Tribunal recommended all prisoners should be able to vote, irrespective of how long their sentence was.

The current government’s bill does not extend that far.

The Supreme Court had also found the voter ban to be inconsistent with the New Zealand Bill of Rights, which says:

“Every New Zealand citizen who is of or over the age of 18 years - has the right to vote in genuine periodic elections of members of the House of Representatives, which elections shall be by equal suffrage and by secret ballot.”

In 2015 five serving prisoners including prisoner Arthur Taylor took to court to argue the inconsistency between the Bill of Rights Act and their disqualification from voting. They won, triggering a declaration of inconsistency and the need for parliament to respond.

What do the political parties think about giving the vote back?

Minister Andrew Little introduced the bill based on the inconsistencies with the New Zealand Bill of Rights Act.

He argued that the 2010 ban enacted by National took the removal of rights too far. Prisoners who had a sentence of three years or less were on the lower-risk end of offending, he said, and should have the opportunity to have a say on who would be in leadership once they were released.

“This is about the right to vote,” he said at the final reading of the bill. “Restoring the right to vote to a bunch of people who had it unceremoniously taken off them by the National Party in 2010. This is the right thing to do.”

National accused Labour of rushing the legislation through Parliament in the middle of a pandemic as a way to get more votes for the 2020 election. Normally a bill will spend six months in select committee, whereas this one spent about three months.

National argue that if you’ve committed a crime serious enough to land you in prison, then for the time you are there, your rights should be suspended.

MP Dr Nick Smith said “This is simply a bill being rushed through under urgency, shortened select committee process so that Labour thinks they can bag a few more votes on 19 September and save their bacon on election day. That's wrong, and that's why we oppose this.”

The Greens agreed with the recommendations made by the Waitangi Tribunal and say the law hasn’t gone far enough. They argue that all prisoners deserve the right to vote, not just those with less than three years on their sentence.

“Prisoners are already carrying out their punishment by being in prison,” Green Party MP Golriz Ghahraman said in a press release.

“Denying them basic human rights to access democracy only serves to further ostracise them from their community and weakens the integrity of our justice system.” 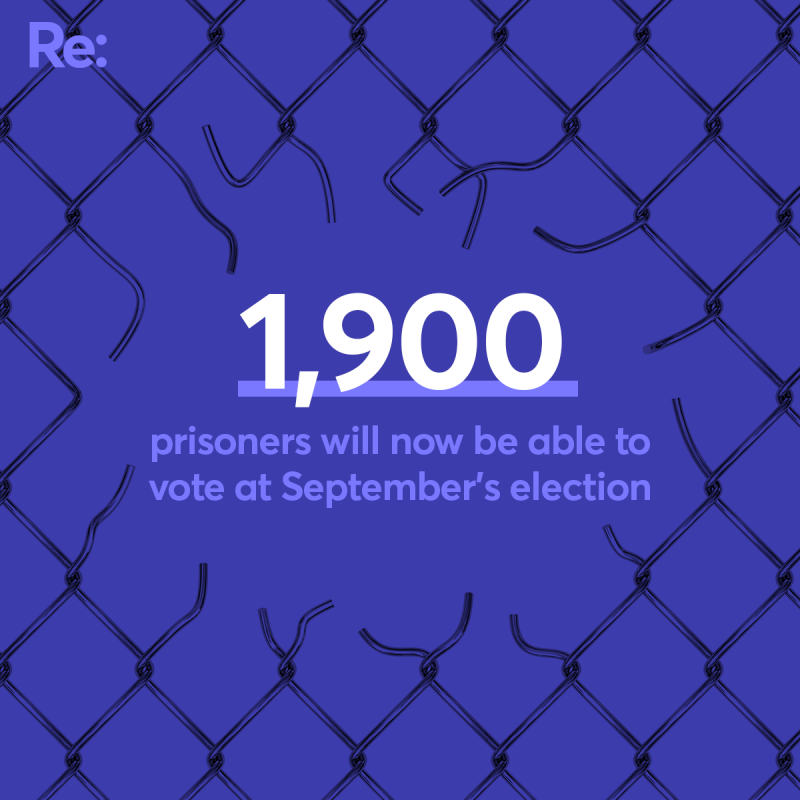 The last step in the process is to get Royal Assent which means the Governor-General signs it and it will become law.

The Electoral Commission will work with the Department of Corrections to have enrolment and voting services in place for the election and referendums in September.