The Government has announced its 2021 Budget. Re: journalist Cass Marrett asked an economist to break it down for her.

Another year, another Budget. This year is about “keeping a lid on the debt” as Finance Minister Grant Robertson says and the Government is calling this a “recovery and wellbeing Budget”.

Last year we borrowed a f*ck tonne of money ($50 billion to be precise) because the Government is trying to buy a house in Auckland.

Nah jokes, it was because of Covid.

This year, we’re still working through that chunk of borrowed money but have decided to borrow less and make the most of our economic position.

We’re doing this in all sorts of tricky ways and because I know literally nothing about economics I got Zoe Wallis, Chief Economist at Deloitte to break it all down.

The most important things to know about this Budget are: 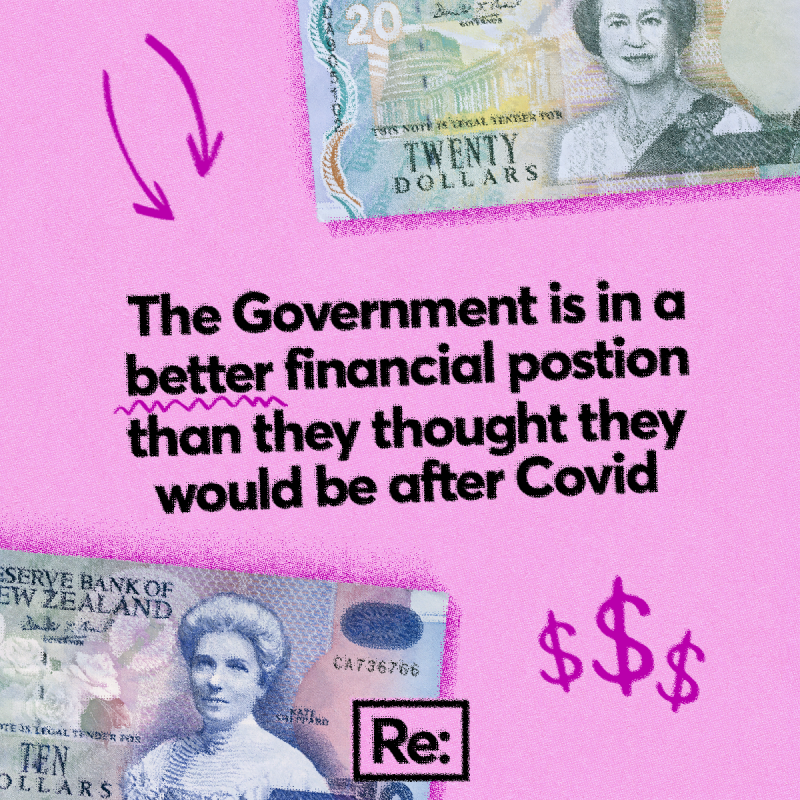 “The New Zealand economy is in a better position to enable them to take a step back and think a bit more strategically about what’s next,” says Zoe. “It's no longer having to pump wholesale amounts of funds into the economy because we're actually in a relatively stable position right now.”

Unemployment is at 4.2 percent which is less than the 10% Government thought it would be. We’re borrowing $15 billion less than we originally thought we would need for the 2020/21 financial year and the economy is starting to look more productive with growth in GDP (gross domestic product) and exports.

Zoe says now the priority is thinking strategically and at the moment it looks like the Government is focussed on addressing inequality. 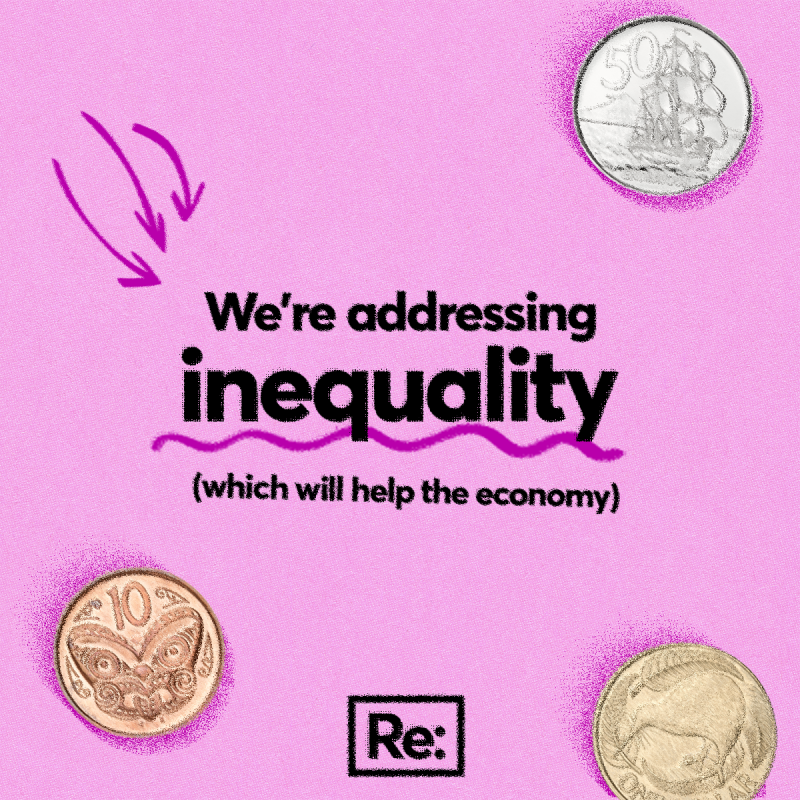 Zoe’s area of expertise is the issue of inequality within the economy. She says it’s become more pronounced over the last year.

When it comes to spending in the Budget, the clear star of the show was the increase to benefits which will pump an extra $3.3 billion into the economy over the next three years.

On April 1 next year benefits will increase by between $32 to $55 a week.  This is on top of the increase the Government had previously announced of $20 a week from July 1 this year.

“We are announcing the biggest increases in main benefit rates in more than a generation,” said Finance Minister Grant Robertson in his Budget speech.

I was interested to know, what impact does increasing the benefit have on the wider economy? What do we say to those who view it as just another government handout?

“Typically for people who are living paycheck to paycheck, every extra dollar they get, they usually spend,” says Zoe. “So if I’m now getting 40 bucks extra a week in benefits, I’m likely to go spend that at my local supermarket, or go get my car fixed, for example.

“That money then goes back into the economy and stimulates growth as well.”

Students will also be getting a boost.

From April 1 next year student support payments (student allowance and living costs) will increase by $25 per week.

And $154 million has been allocated to the Training Incentives Programme which aims to help 16,000 sole parents, disabled people and carers with study costs so they can get a tertiary level qualification.

There’s been a significant investment into Māori outcomes

$243 million is allocated funding for Māori health which will go towards establishing a Māori Health Authority and giving money to invest in hauora Māori services.

A further $380 million is set aside for Māori housing solutions including new housing and repairs to existing houses.

Zoe explains there is a huge benefit to targeting Māori outcomes in this way.

“The unemployment rate for Māori is close to 10% versus below 5% for the general population and we know that health outcomes and life expectancy are also worse for Māori,” says Zoe.

“Investing in Māori health, Māori housing, and building out support for Māori development and training is absolutely reducing inequality in your economy and lifting the outlook and employment outcomes and wage prospects for as many people as possible.”

Essentially, the more people we empower people to contribute to the economy, the less of a problem inequality becomes. 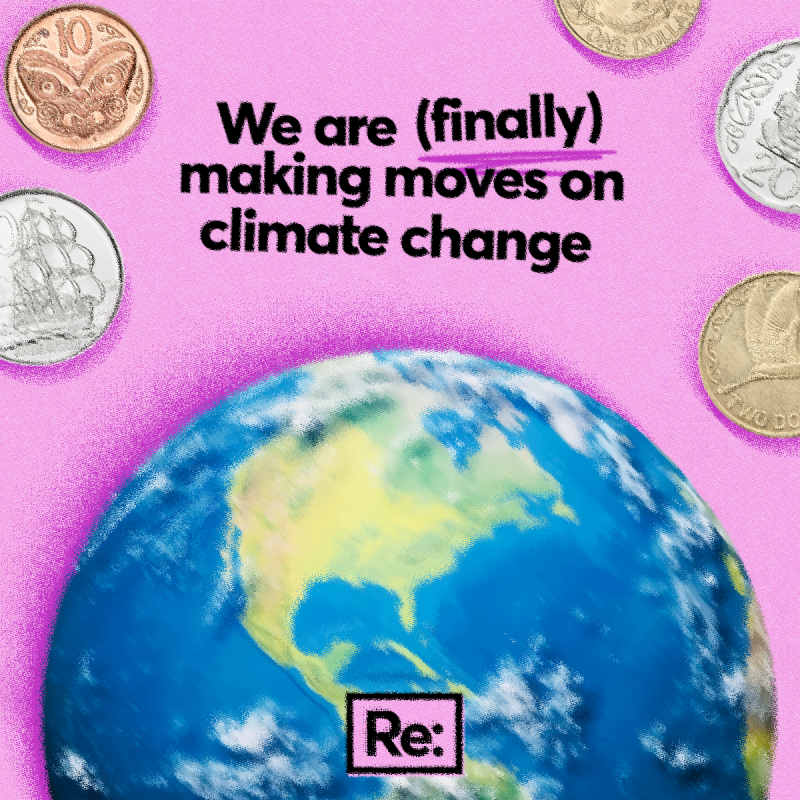 “This is one of the highest amounts that you’ve seen a government dedicate to climate change,” says Zoe.

$300 million will be given to dedicated to NZ Green Investment Finance Limited (NZGIF) who are tasked with spending that money on decarbonising public transport, tackling the waste and plastics sectors and reducing emissions.

There’s also $302 million in incentives to encourage the use of low-emissions vehicles and $67.4 million across the Carbon Neutral Government programme, the Warmer Kiwi Homes programme, the Low Emission Vehicle Fund and more support for businesses to transition to low-emissions energy.

But even if it is one of the most significant investments we’ve seen it’s only the first step.

The Government is waiting on the final report of the Independent Climate Commission which will tell us how we are going to reduce emissions enough to meet the requirements of the Zero Carbon Act.

Grant Robertson pointed out in his speech how hard it can be to invest in climate change.

“My view is that the current way in which Budgets are required to be produced makes it difficult to make the sustained and long-term investments needed to fix an intergenerational, multi-faceted, complex problem like climate change,” he said.

Zoe says investing in climate change is more of a “short-term pain, long-term gain” type scenario – kind of like doing crunches at the gym.

“To meet our climate change goals our economy is going to have to shift,” says Zoe.

That’s going to involve things like transitioning to electric cars and changing factories from gas or coal to renewable energy.

“That doesn't come without trade offs, risks and costs. But it's absolutely something we need to do,” says Zoe.

She says the key thing to look for in the next couple of Budgets is how to do this in a way that certain people or businesses won’t be grossly disadvantaged. 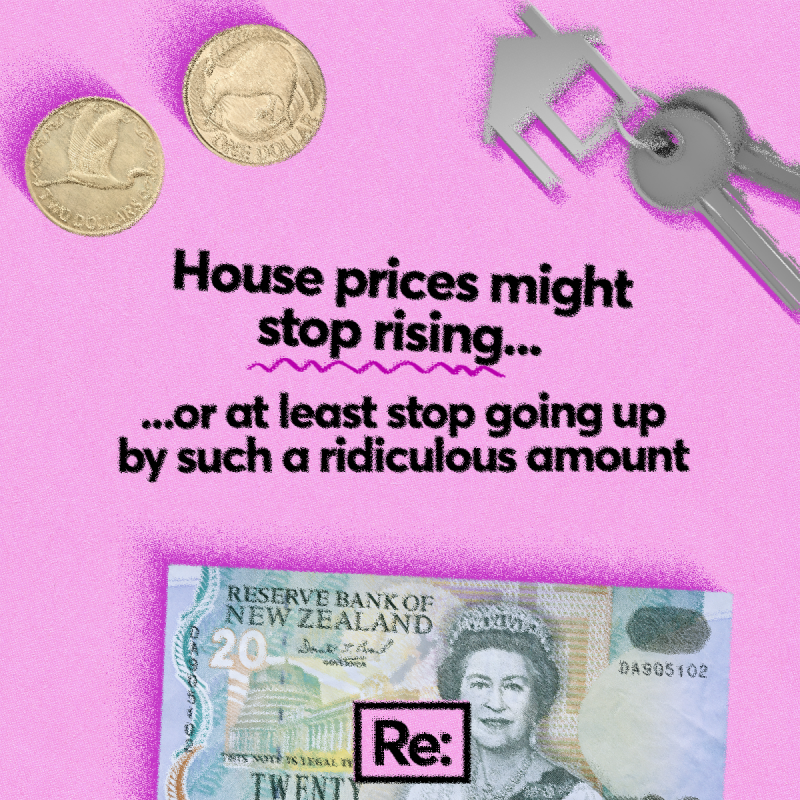 When I asked Zoe if anything was particularly shocking in this Budget she said it was pretty tame – no real tea to spill.

But what did turn heads in the Deloitte office was that the Treasury (who are like the Government financial advisors) reckon housing inflation would drop to 0-2% which meant house prices would remain pretty stagnant or only go up slightly.

It’s surprising because house prices have gone up 19.1 percent since April last year. The median house price one year ago was $680,000 and in just one year it has skyrocketed to $810,000.

Because the government had already announced how they planned to unfuck the housing market earlier this year, there wasn’t a lot of money being thrown at it in the Budget.

There was however, $3.8 billion allocated to a new Housing Acceleration Fund. Its aim is to increase and speed up housing supply.

Over the next 12 months, the Government says we should be seeing some of the highest numbers of houses being built in decades. But Zoe says whether that actually happens could be a different story.

“The risk in my mind is that we're actually struggling to get building supplies and we're struggling to get people to build houses. So even though there's been all these consents issued saying you can build, it’s a question of whether or not that work will actually get delivered within that timeframe or if the cost will keep increasing,” she says. 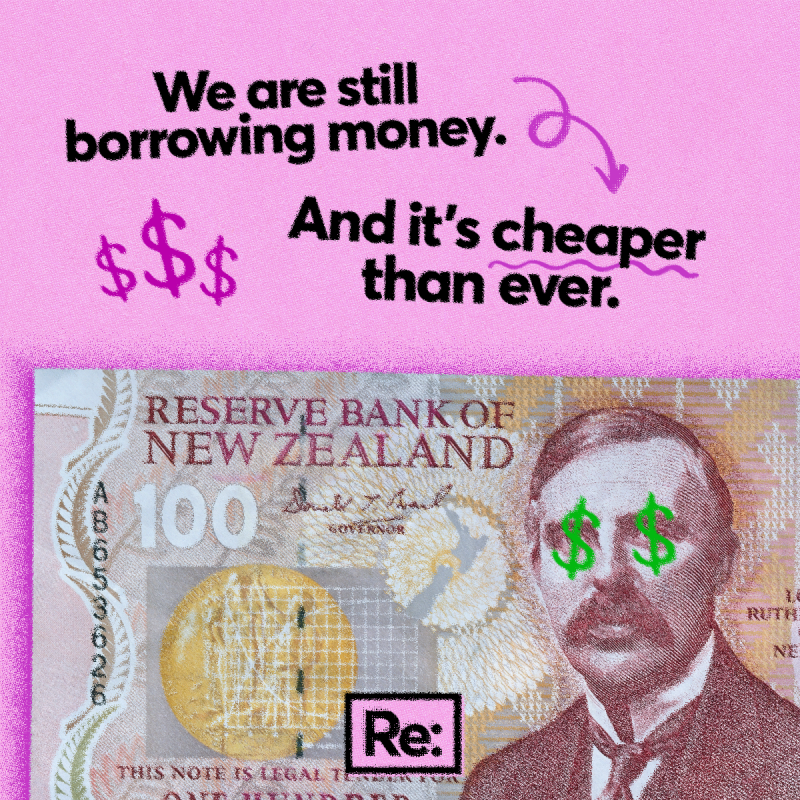 Last year the Government intended to borrow a total of $60 billion by the end of the 2020/21 financial year (which ends in June this year).

Did we spend all the money we borrowed? The short answer is yes. But..

“[Government] adjust their forecasts and actual borrowing in response to need for the funds,” explains Zoe.

We needed less funds than we thought and the government adjusted the amount of money we were borrowing for the 2020/21 period from $60 billion to $45 billion.

And looking ahead, the government will only borrow $25 billion over the next three years.

Who lends us the money?

The Debt Management Office does exactly as the title suggests – it manages government debt.

They were in charge of borrowing this financial year’s $45 billion and they did it by selling government bonds investors.

Bonds are essentially slips of paper that say if you give the government x amount, they’ll pay you back that same amount in x years with interest based on a set interest rate.

At the moment those interest rates are at an all time low to try and stimulate more spending in the economy which means the cost of borrowing this money won’t be so high.

Then there’s the Reserve Bank who is the overlord of all the retail banks – ANZ, Kiwibank, ASB etc.

The Reserve Bank is owned by the Government but statutorily independent – so they can do what they want (kinda).

This injects more money into the economy by giving retail banks more money to lend out to businesses and households.

Borrowing is just one money bag for the Government. In addition to this, the tax we pay makes up a large portion of money coming in too.

While you may think loans are a bad thing, the Government uses it as a tool for investment to help recovery.

The idea is, by injecting more money into the economy, it’ll be more productive and bring in even more money to help us reduce the debt we’ve gotten into.

Because our immediate bounce-back from Covid was so strong, there’s good news: 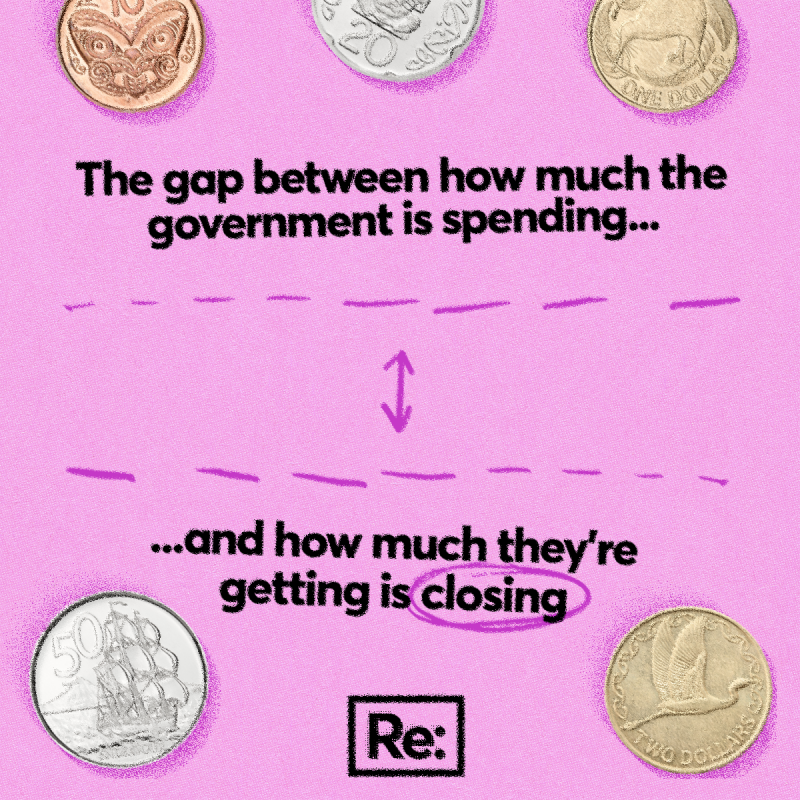 Currently the Government is spending more money than they’re getting in which means we are in a deficit.

The good news is the Treasury expects our deficit to “narrow to 2.3 billion by 2025” which means the gap between how much the Government is spending versus how much it’s getting will get WAY smaller.

Zoe says this is done by spending less and having a solid economy.

“We had a big spend-up by the government in response to the Covid pandemic. On the other side of that [our] tax take is still looking pretty good. That helps in terms of revenue. That’s money coming in the door”

As Grant Robertson reiterated in the lead up to the Budget announcement, fixing our “foundational challenges” such as housing affordability, climate change and child wellbeing will not be done in one Budget.

As someone who knows marginally more than I did yesterday, I guess this is a good start.

How the Government plans to unfuck NZ housing