We all know the housing market’s fucked. But how did it get so bad? Re:’s Cass Marrett went back nearly 40 years to find out.

For the past year, the housing market has puppeteered our headlines with stuff like “Millenials Buy Too Much Avocado Toast, Can’t Afford Houses” or “Investors Are The Anti-Christ and They’re Coming For Those Low Interest Rates”.

Okay, I’m exaggerating. But let’s be honest, the headlines have been kind of bitchy and I love it.

But if you’re like me, you can only smile and nod so many times before someone clocks you for not knowing what’s what. So, before that happens, I decided to find out exactly how the housing market got so cooked.

To start, some light background reading. Only, it wasn’t long before I was drowning in an alphabet soup of acronyms – OCR, LVR, RMA... WTF?

I enlisted the help of Kiwibank economist Mary Jo Vergara to run me through the past year.

She broke it down like a recipe, with three main ingredients: 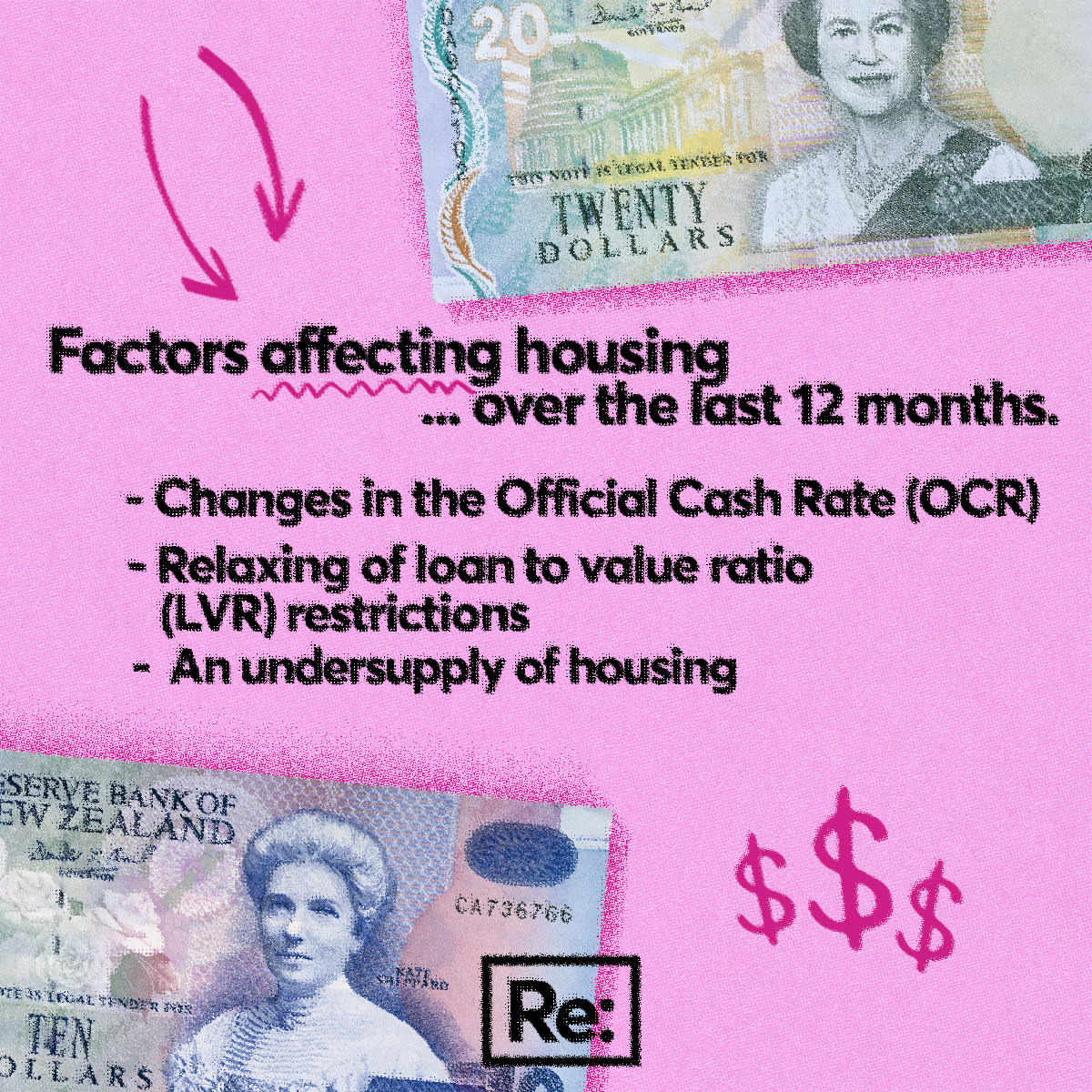 What it all means

“The most important factor driving the strength of the market is the interest rate,” says Mary Jo.

Mary Jo is talking about the fact that banks don’t give out mortgages for free. When you borrow money, they’ll charge for this service, and that charge is called interest.

The interest rate determines how much you’re going to pay for your home in total, and how much your regular mortgage repayments will be. Put simply, the lower the interest rate, the less you pay, and the more disposable income you have for avocado on toast.

Last year, interest rates from banks fell to an all-time low (from about 4.5 percent to less than 2.5 percent). The lower rate meant more people could afford to borrow money, attracting investors and first home buyers alike.

The reason this happened was because Covid prompted a drop in the official cash rate (OCR).

The OCR is basically another interest rate, only it’s set by the Reserve Bank - which is like the Bank of all banks. If you ever wondered where retail banks like Kiwibank, ANZ and ASB get their money from, it’s from these guys. They borrow from the Reserve Bank at its set rate (the OCR), and lend to us peasants at a rate fractionally higher.

During Covid, the Reserve Bank dropped the OCR to a record-low 0.25 percent.

Mary Jo: “They [the Reserve Bank] did that with the idea of stimulating economic activity because when you've got low interest rates, in theory, it's an incentive for people to invest more  because they see that money is cheap to borrow.”

However, when the Reserve Bank lowered the OCR, it unintentionally kicked-off one helluva year for the housing market. Essentially, the lower rate made it easier for investors and people who already owned property to borrow more, and buy more.

A loan to value ratio is calculated by dividing the amount of money you intend to loan by the total value of the property. Importantly, there are different LVRs for those who live in their homes (owner-occupiers), and investors (people who buy property to make money by either renting or reselling it).

When LVR restrictions were in place pre-pandemic, owner occupiers generally required a 20 percent deposit, and investors a 30 percent deposit. Note: there were a few expectations, like being on the government First Home Loan Scheme, or getting the banks to give you a bit of leeway (yes, they do this for some people).

During Covid, the LVRs fell to 10 percent, and 20 percent respectively.  It was supposed to help  people facing financial difficulty. But just like the lower OCR, the lower LVRs created changes which favoured people who owned properties. For investors, they took the opportunity to leverage their existing property portfolios and buy more.

Now imagine investors with multiple assets and multiple opportunities to free up that equity. It amounts to multiple new investments at record low interest rates – yikes.

Just a note: Post-covid, the Reserve bank increased LVRs again. On May 1, the LVR for owner-occupiers went back to 20 percent. For investors, it increased to 40 percent.

If you’re overwhelmed by all that, don’t forget we’re also dealing with a literal shortage in housing. Essentially, there’s just not enough homes for us all to live in, which is why the current housing crisis - which worsened last year - is unlikely to ease anytime soon.

Back to the future

Interestingly, the problem goes a lot further back than the craziness of 2020.

University of Auckland urban planning lecturer, Dr Elham Bahmanteymouri, looks at urban growth management and housing policies. She pinpoints the inaccessibility of today’s housing market to neoliberal changes that came about via the 1984 snap election.

Those economic reforms were brought about by this guy Roger who was the Minister of Finance for the fourth Labour Government from 1984-1990. I’ll admit, I’d never heard of him before this story. But changes he made while Finance Minister - known as Rogernomics - reshaped the New Zealand economy, and had long-lasting impacts on the housing market.

Minister Roger Douglas favoured a neoliberal approach, which meant shifting power from the public sector to the private one.

For neoliberalism, the key ingredients are: 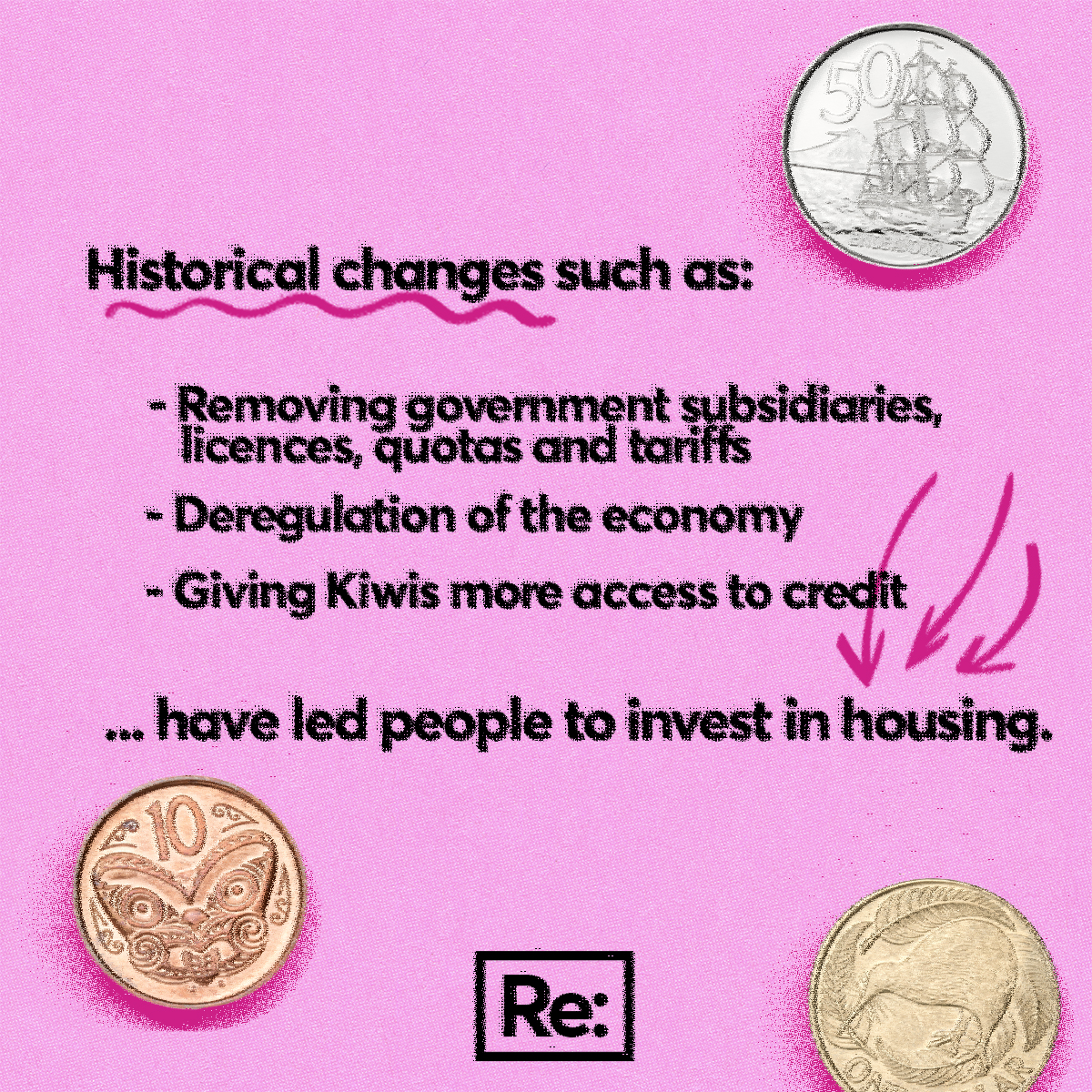 What it all means

One of the major impacts of Rogernomics was a shift away from agriculture as the main contributor of the economy.

First, Government subsidies for things like fertiliser and funding for drought relief, floods and other natural disasters were removed. The subsidies had made up roughly 33% of income for farmers.

Second, licences, quotas and tarriffs on imported goods were removed. Before 1984, importing goods came with significant costs. People either had to pay for a special licence, or were limited via quotas to the amount of goods they could import. A tax, known as a tariff, was also changed when goods entered the country. Essentially, the changes made it cheaper to bring foreign goods into the country, and less profitable to manufacture things locally.

Third, GST was also introduced for the first time at a rate of 10 percent.

All of these things made it more expensive to be in the manufacturing and agriculture industries. Service-based industries like education, tourism and financial services became the highest contributors to the economy.

Further, specific changes to financial services made it easier for everyday New Zealanders to borrow money for housing and consumer goods.

Deregulation of the finance sector

Deregulation is when restrictions are removed.

In 1984, the government removed restrictions that stopped banks from competing with other financial organisations offering different services. It meant a lot of former finance companies were absorbed into banks, and there was more competition for mortgage lending.

Banks also had to register with the Reserve Bank of New Zealand. At the same time, foreign exchange controls were relaxed which allowed overseas banks into the New Zealand market, as well as more foreign money and investors.

Dr Elham: “We wanted to have more people in these markets to create a hot market and more people engaged in the transaction for the sake of economic productivity and higher economic growth.”

With increased access to credit and lower taxes (another key pillar of the 1984 economic reforms), New Zealanders had access to more money than ever before. Naturally, people found ways to spend their new-found cash.

“Capitalism operates through consumerism,” says Dr Elham. “The system of credit cards helped the whole economy create more demand and boost the economy. It means you can buy something based on debt, it creates more demand and means more economic growth,” she says.

That applied to mortgages at the time too, which made property ownership a good investment for people.

For Dr Dr Elham, the neoliberal changes that happened under Rogernomics have parallels to the current situation. Back then, the Government wanted to stimulate economic activity by opening up the market and making it easier for people to borrow. Last year, the Reserve Bank had the same intention, only it used the OCR and other lending restrictions to do it.

In the end, both sets of changes cemented how valuable housing is in New Zealand - as a personal asset and investment choice. 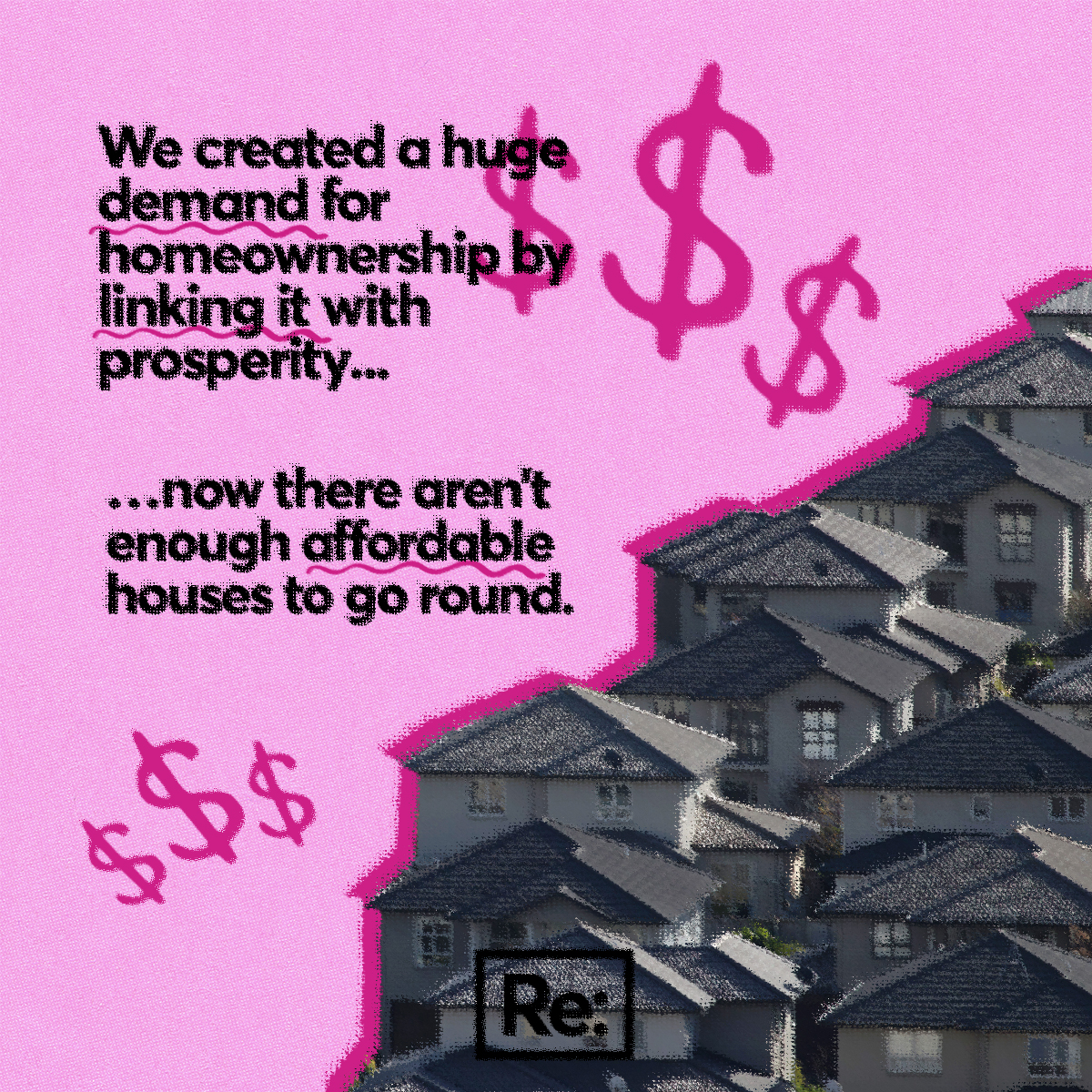 Of course, we can’t discuss a cooked housing market without getting into housing supply.

Dr Elham says it’s hard to pinpoint exactly when a shortage in housing occurred, but believes it exacerbated after the 2007/8 Global Financial Crisis. Today, she believes one of the big challenges to fixing the lack of supply is the kinds of houses being built.

Yes, lack of workforce and resources in the building sector is a problem, Dr Elham says, but there’s also issues around the homes being selected for construction.

New Zealand needs to move away from building bigger homes or certain types of homes, Dr Elham says. It also needs to stop viewing housing as the main source of wealth and investment.

“We use this lack of affordable housing or lack of enough housing in the market as an engine of economic growth to make more money out of that,” she says.

Change is possible, but it won’t happen overnight and requires a fundamental reset to the country’s economic foundations, Dr Elham says.

How the Government plans to unfuck NZ housing