Driving across the North Island with a billboard that says ‘Are we Abel to be called Aotearoa now?’ means it’s hard to miss Hohepa Thompson.

The Ōtaki-based artist, better known as Hori, kicked off his drive on Tuesday as part of a campaign to combat a message from Hobson’s Pledge that “it’s New Zealand not Aotearoa”.

Hori’s campaign, Hori’s Pledge, is about correcting the country’s name and returning it to Aotearoa.

Hori said he is trying to offer people more of an insight into mātauranga Māori and the history of the name Aotearoa.

“Hori’s pledge is about offering mātauranga and understanding about our worldview so that we can better understand both sides of this kōrero about the renaming of Aotearoa to New Zealand,” the artist said. 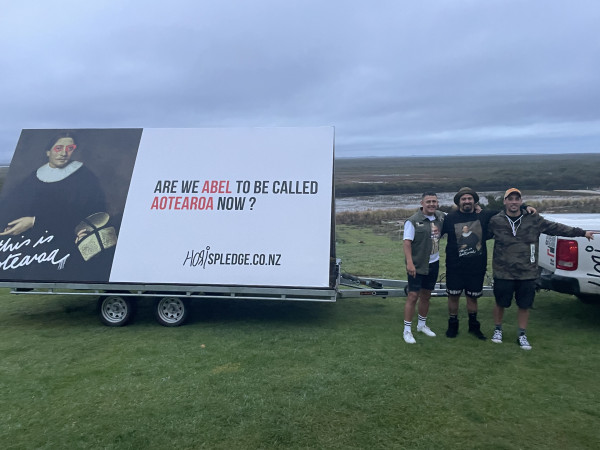 The billboard that says 'Are we Abel to be called Aotearoa now?'. Photo: Supplied

Starting his tour from Parliament grounds, Hori (Ngāti Kahungunu ki Wairarapa, Kai Tahu and Ngāti Toa Rangatira) has travelled along the West Coast all the way to Cape Reinga.

He is making his way back via the East Coast towing his billboard that on the other side reads: “This guy wasn’t strait, he was Cooked as.” A play on words related to the colonial influence of James Cook.

The campaign is a collaboration with Te Pāti Māori.

Last September, the party launched a petition to have New Zealand’s name officially changed to Aotearoa and to restore the original Māori names for all towns, cities and places across the country by 2026.

Last year, National MP Stuart Nash also called for a referendum over the use of the name Aotearoa by the Government.

Hori said a lot of Pākehā and tauiwi (non-Māori) don’t actually know the story of how the names Aotearoa and New Zealand came about and “there was a culture that was here before Abel Tasman reached these shores”.

So the aim is to understand both sides of history, he said.

“And then hopefully in the future we could see that this is our history together.”

When he made it to Tāmaki on Thursday, Hori had hoped to meet the leader of Hobson’s Pledge Don Brash and to have a conversation but this did not end up happening.

“I don’t think [Don Brash] is a bad person whatsoever, I just think his values and what he represents are a little mixed up."

“He doesn’t have that worldview so he can’t see it from the other side and that’s kind of what we wanted to get through to him,” Hori said.

But the campaign went beyond Brash.

“It’s not really him we want to be concentrating on, it’s the people who think like that.”

“You’re always going to have those people jumping up and down about something like this, so hopefully we get through to a few of them,” Hori said.

The name change petition by Te Pāti Māori will be delivered to parliament next week.

Living in NZ is expensive, what will the Budget do? Economist explains

Will the Budget really make a difference to the cost of living? We asked an economist.

Debunking 5 sex myths I learnt as a young Pasifika woman

If your oil dries up, you’re absolutely fine, sis.

Is Tauranga a hotspot for racism? We asked people on the street

Their answers will probably not surprise you.