After being asked to help restore Tonga’s internet, Elon Musk has come through.

The eruption of Hunga Tonga–Hunga Haʻapai, an underwater volcano, on January 15, triggered tsunami waves across the Pacific. The eruption covered islands in ash, cut off power and severed communications as the main undersea communications cable was disrupted.

Since then, Tonga has been without a stable internet connection for 27 days.

But on Monday, Fijian attorney-general Aiyaz Sayed-Khaiyum shared on social media that employees of Musk’s company, SpaceX, had arrived in Fiji to try to connect Tonga to its Starlink satellite internet service.

To use the Starlink internet service, you need to be within 2000 kilometres of a Starlink Gateway station. Tonga is 640km away from Fiji.

With a station in Fiji, Tonga will be within the 2000km range needed to access the Starlink internet service.

SpaceX has not provided any statement on how long this will take.

Tonga has been without stable communication for weeks, and it will be weeks more before it can be fully restored.

Now, National MP Shane Reti and Elon Musk have gotten involved with the outage. Re: Journalist Baz Macdonald digs into just what is happening with Tonga’s communications network.

Like many Tongans living in Aotearoa, 'Anau Mesui-Henry desperately tried contacting her loved ones after the eruption of Hunga Tonga–Hunga Haʻapai.

But the island’s communications had been blacked out by the eruption.

After days of repeatedly calling family members in Tonga, she finally managed to connect.

Through static and the signal cutting in and out, she could just make out the most important information 一 her loved ones were safe, their home was intact, and they were staying strong.

“For me, like a lot of Tongans, we have strong faith. While the normal communications are not available, there is the hoping, trusting and knowing that our people are strong and will pull through.”

This is not the first time 'Anau has been left in the dark by communications outages in Tonga but she says this is the longest and most extensive.

And nearly two weeks after the eruption, communications have not been fully restored on the island.

There it connects to the Southern Cable Network - a 30,000km loop of undersea cable from the southern United States, through Hawaii, Fiji, Australia, and then to New Zealand and back. 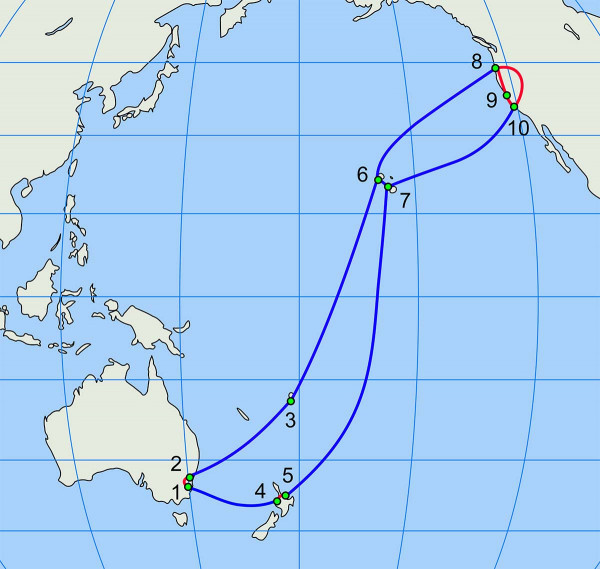 The Southern Cable Network. Submarine portions are in blue, aboveground are in red. Credit: J.P. Lon

When you’re connected to the internet, whether searching something in Google or checking your Instagram, any request you make gets sent through that cable under the ocean to a huge warehouse of computers (or servers). Then those servers send you back the information you’re looking for.

This happens so fast it often seems instant - with information travelling at 200,000km a second, it takes a fifth of a second for information to get from Auckland to Los Angeles and back.

But all of this relies on a tiny cable under the oceans that, for Tonga, was broken by the eruption.

Following the eruption and loss of internet, the line was found to be broken in two places - 37km and 47km offshore.

The suspected cause of these breaks is a land slippage on the seafloor from eruption.

A boat has been sent from Papua New Guinea to make repairs but it won’t arrive until February 1 at the earliest and repairs will take a minimum of a week to do.

With the time it has already been down and repairs needing to be done, Tonga will be without internet for at least a month.

The call for Starlink

With Tonga’s internet cable broken, the search for an interim solution became very public on Friday January 21, when National MP Shane Reti tweeted out that he had reached out to SpaceX and Tesla CEO Elon Musk for help.

I guess Elon Musk can only say no and if you don't ask you don't know. After the Minister told me in a phone call on Monday that the telecommunications cable to Tonga was down I immediately sent a letter to Elon to see if he would contribute Starlink to the emergency pic.twitter.com/Upg9WijWrq

In his letter to Musk, Reti asked, “if you could see your way please to providing urgent Starlink internet communications to public officials and the good people of Tonga in this moment of need.”

Starlink is a SpaceX service that provides high-speed internet through an array of satellites, rather than a cable.

Unlike our cabled network, if you’re connected to the Starlink network your internet requests are beamed to an array of satellites, then to a server farm and back again.

Where the infrastructure for this network has been fully established, early reports have shown data travels 12 times faster than it does through the Southern Cable Network.

In a Twitter reply to Reuters, Musk asked: “Could people from Tonga let us know if it is important for SpaceX to send over Starlink terminals?”

Yes @elonmusk we need them to get liquidity in to purchase much needed goods. Voice & data Completely down with undersea cable severed. I have a plane airdropping hamradio in for basic comms, but @starlink essential. Pls contact me to coordinate and help.

When a Twitter user replied with Reti’s letter, Musk replied:

“This is a hard thing for us to do right now, as we don’t have enough satellites with laser links and there are already geo sats that serve the Tonga region. That is why I’m asking for clear confirmation.”

Stephen Canny, the director of Space Operations NZ, says while Starlink has been ramping up its infrastructure to cover most of the world, a main requirement of service is being within 2000km of a Starlink gateway - which receives the internet request and sends up to the satellites.

Tonga is not yet in range of one of these stations, Canny says.

“Starlink would have been very elegant and reliable for the population at large, but the ground and satellite infrastructure is insufficiently deployed to provide good service.”

While unfortunate that the service wasn’t yet ready to help with this disaster, Canny says, this situation is a good example of why it is important to have redundancies in communication systems.

“Having reliable low-orbit satellites is a great solution for the vulnerability of cables. But you still need redundancies, and so the cables will continue to be a key part of internet infrastructure.”

Canny says there are other short term solutions to provide reliable internet to Tongan leadership and emergency coordinator, such as a VSAT - a small portable satellite dish that can be positioned to connect to a network.

However, without Starlink, Canny says the Tongan people at large will have to wait for the cable to be reconnected for their internet to be fully restored.