The Nuremberg Code has become a go-to-reference for people who disagree with the Covid vaccine or its rollout in Aotearoa.

Re: explores what the Nuremberg code is, why it was created and if it's appropriate to link it to the Covid response.

Created at the end of World War II, the Nuremberg Code is a set of ten principles for ethical human experimentation in medical research, created in response to war crimes committed by Nazi scientists and medical practicioners.

These crimes included the forced sterilization of more than 400,000 people, horrendous live experiments including freezing people, or depriving them of oxygen, and procedures such as swapping limbs on people to see what would happen.

According to the Nuremberg Code, in order for experimentations to be ethical, research participants must be willing and informed, every precaution has been made to ensure safety and the results from the trial must be original and useful. 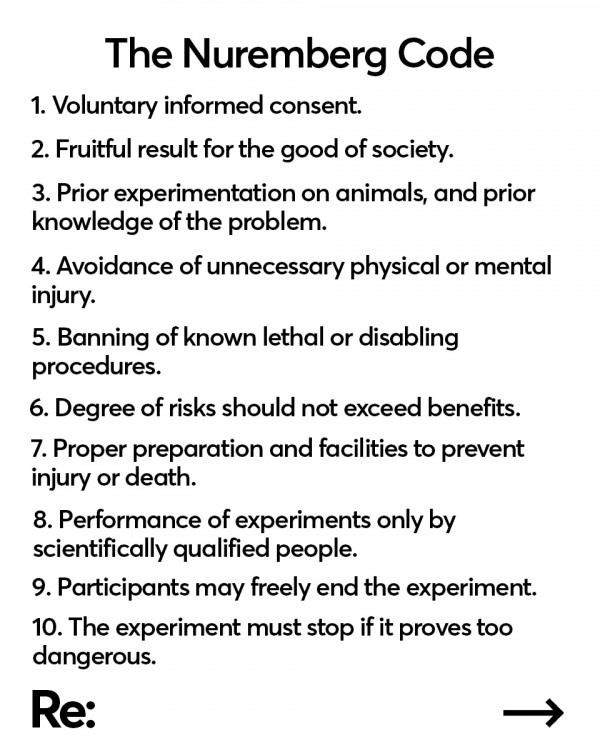 The original, un-summarised version can be found here.

Costi says these principles, while not laws themselves, have gone on to become the legal foundation for the rights and responsibilities of patients and medical practitioners here and around the world.

In New Zealand, that includes your rights as a patient under the Bill of Rights as well as medical codes of ethics for both practitioners and hospitals

He says claiming the vaccination rollout has breached the Nuremberg Code “is really stretching the limits of imagination”.

“It belittles the real atrocities [the victims of Nazi doctors] were subjected to. They were not given any choice, they were truly vulnerable, and they were taken advantage of and treated like animals.”

From a legal viewpoint, Costi says “nothing I can see that is being done is raising concerns about the Nuremberg code being violated”.

Delving into dozens of posts and comments claiming the vaccine rollout has breached the Nuremberg code, Re: News couldn’t find any specific claims about how exactly they believe the Nuremberg Code has been breached — just the accusation it has been. 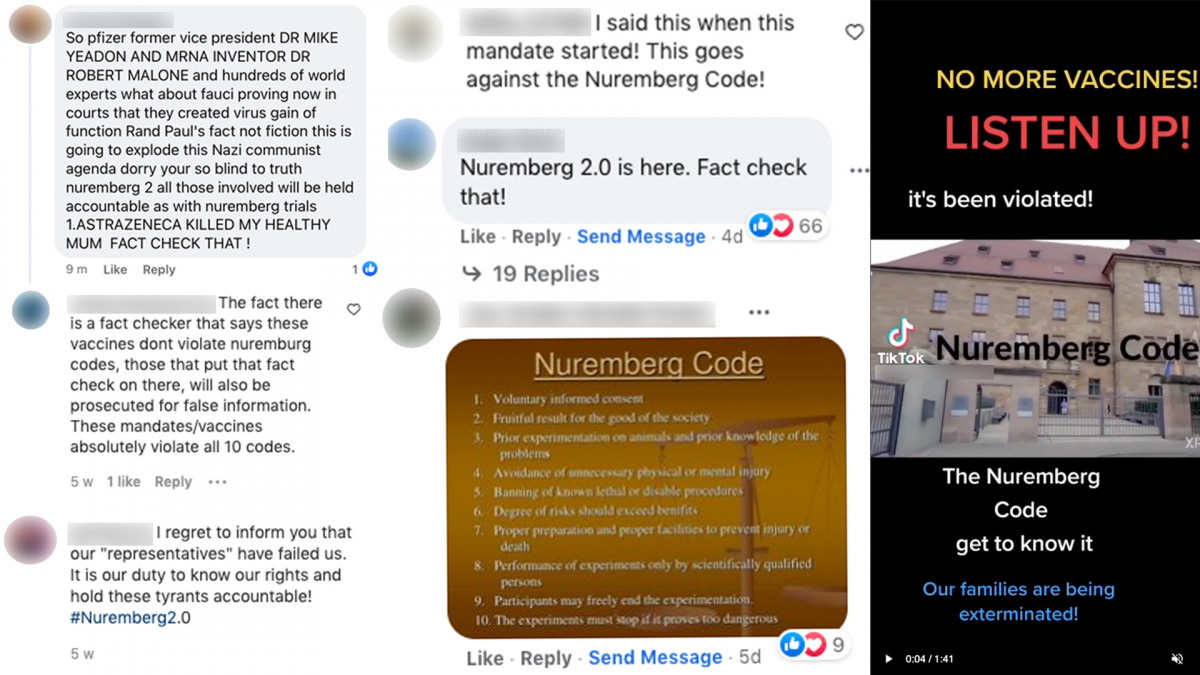 Immunologist Graham Le Gros is the director of the Malaghan Institute of Medical Research in Wellington, and the Nuremberg Code, he says, underpins everything they do.

Le Gros says everytime they propose a human trial, they have to prove to an ethics committee that these principles are met, with informed consent, safety, and “thought around all of the consequences of the actions and whether something better is achieved from the work”.

He says the accusations of the Nuremberg Code being breached by the vaccine rollout are completely baseless, and also incorrectly applied.

“The Nuremberg code refers to when they are in an experimental phase when we don’t know what the consequences will be.

“But the vaccine rollout now is not in an experimental phase. They are completely wrong to make that association.”

Le Gros says claims that it breached the Nuremberg Code are “grotesque, cruel and have no bearing”.

“60,000 people willingly gave the companies and regulatory bodies the statistical basis to say it was safe, effective and could be used within the different age groups who have access.”

Le Gros says he sees critics of the Covid-19 response using the language of the scientific community, while completely intentionally or unintentionally misunderstanding the concept.

Medical experimentation happens across four phases. In the first three, researchers conduct increasingly large trials of a medicine to check for its safety and effectiveness.

Stage four is the general release of a medication, where the scientific community tracks its safety and effectiveness for five years.

Le Gros says this is where researchers discover the “one in a million, or one in ten million abnormal reactions”.

“When anti-vaxxers say this is only in stage four, they are being disingenuous because this is the part of the trial that can’t be done in trial,” he says.

“It is completely dishonest and should be ignored.”

Female dolphins enjoy sex, and their clitorises aren’t that different from ours