Statues of colonisers, slave traders and racists are being pulled down as part of a global reckoning with racism. In light of that, for this month’s edition of Māori and the City, Tayi Tibble recounts the time she tried to tag a replica of the Endeavour, the ship on which James Cook began the colonisation of the Pacific.

On the 25th of May, George Floyd was killed by Minneapolis police in broad daylight. As a result, what seemed like the entire world erupted into outcry and protest.

I, like many, have spent hours and hours this month glued to my devices checking for updates and it’s been painful. Via our social media screens we have been witness to many traumatising scenes; more police brutality, more dangerous dumb Karens, more white fragility, guilt and apathy, and more demonising and harassment of black and brown people, both online and off. It’s all been completely chaotic, but as every quasi-spiritual guide like myself knows, chaos comes with potential; the potential for change and growth.

Already we have seen positive outcomes from protests and online activism like the Minneapolis City Council declaring its plans to defund their police department. The discourse has even had significant impacts here in Aotearoa with the police making the decision to stop their armed response team after its miserable trial.

Personally, as someone who was deeply disturbed by the ‘stickwithvic’ hashtag that went around when Victoria University wanted to change its name last year, I admit to having found some enjoyment in watching the defacement and toppling of racist monuments to slave masters and colonisers all around the world. And while some people might claim the removal of these statues and monuments unnecessary and vandalistic, I don't know what to tell you cos I personally find watching stone colonisers sinking to the bottom of the ocean cute and fun.

It reminded me of an evening late November last year, at the debut Brui. Brui (Beers and Hui), is a monthly/bimonthly event that my e hoa Miriama and I started for Māori creatives to connect in Wellington; to network and support each others’ gigs/exhibitions/readings etc. We held our first Brui at Karaka Cafe, a favourite Māori hotspot in Wellington right on the waterfront. It was a particularly happy day; I had just got my nails done like Kylie Jenner’s on the cover of Playboy and the sun was out.

We sat outside in the sun drinking kawakawa mojitos, all of us chuffed and Māori as, but also dumbly unaware that this day, of all days, on the momentous occasion of our first ever Brui, The Replica Endeavour was moored in our harbour as part of its traumatising Tuia 250 tour of New Zealand.

One of our mates arrived in a jacket which on the back read “James Cook's first voyage his crew murdered indigenous people in Tahiti, Society Islands, New Zealand, Australia and Java”. Soon, the topic of Cook and the legacy of the Endeavour started to spread around the party, along with some pretty crack up jokes I must admit, but also that distinct feeling of uncomfortable suppressed rage that Māori have been feeling for generations and continue to, in the face of colonisation, have continually thrust upon us.

A few inu later, in the bathroom, M and I were staring at each other in the mirror when a great idea occurred to us; should we tag the Endeavour?

For context, M has significant Saggitarius placements and is also an extremely talented (though occasionally judged for it) graffiti artist. I am a great and jealous admirer of the art form, but also incredibly encouraging towards my e hoas (aka a stirrer). We watched each other's eyes grow wide and then we started screaming at each other.

Hell yeah. God yes. Omg that would be so iconic. What should we write? F**k Cook. Omg what if we actually wrote f**k Cook on the Endeavour? I honestly feel like it would immediately repair all colonial trauma every Māori has ever suffered in Aotearoa from contact to date. Honestly I think so too. Honestly we should do it. Who should do it? You have to do it obviously. I think I have a vivid. Yeah do you have a vivid? Nah. We’re all artists here, surely someone will have a vivid. Okay let’s go ask. Omfg. This is so funny.

Now, before any patriotic racists want to destroy my future employment opportunities or have me arrested for admitting to vandalism, let me ruin my own story prematurely by conceding that no, we did not manage to tag the Endeavour; which was disappointing though anticipated. I think deep down, beneath all our hearty ngati bravado, we had some idea that actually being able to tag the Endeavour would be no easily accomplishable feat, but there was a small power in the potential, that possibly, we could.

We went back to our table and asked if anyone had a vivid. No one had a vivid but Isaac had a red pen. We explained to him what we needed the pen for. ‘Omfg that would be epic,’ he agreed, ‘I’m gonna come.’ And so the three of us set off down along the waterfront to go and find the Endeavour.

The three of us were vibrating with naughty, nervous energy. “Rebel Natives!” we joked. M had her hoodie up, her hands in her pocket. She whispered to me, “feels like I’m holding a knife!” and flashed me the sheath of her red ballpoint bic pen and we all cracked up. In the distance, we spotted The Spirit of Adventure. I was faintly aware of The Spirit of Adventure on account of I think my cousin wanted to do the programme when we were 12 or so. We could make out six or so young teenagers making moves on each other. We walked up to the Spirit of Adventure and asked them, is this The Endeavour?

“Are yous drunk?” they asked us back. “Are yous drunk?” we asked back, offended. They did seem drunk. “Yous are totally drunk.” “Can we come on?” “Sure,” said the teenagers. “No no no,” said the Cabin Mum, suddenly rushing out from below deck, “I have fifteen year olds on here.”

“What?” M said, her nose scrunching up in skepticism, “you have 50 ten-year-olds on here? That’s crazy.” “We’re looking for the Endeavour,” Isaac clarified. “Keep going,” directed the Cabin Mum, “it’s a bit further down, past the Waka Hourua.” “Okay thank you,” we said. “Bye,” we said to the ten or fifteen year olds.

We kept walking, laughing. Miri still had her hoodie up. We spotted the Waka and knew we must be close. Lesh go.

We were still making jokes and feeling cocky and bad when we rounded a corner near Frank Kitts Park and suddenly, without warning, we were face to face with the Endeavour.

We were shocked into silence. Its tall stringy-looking mast made the entire thing look ghostly and grey. The same thought seemed to occur to us at the same time and we all exhaled “Death ship” in the same breath. I knew that we were all thinking about what it must have been like for our tūpuna to have seen that ship for the first time; so alien and terrifying. All the bravado was immediately sucked from us and we felt humbled and horrified. The wairua was thick and dark.

The Endeavour was behind a gate and was guarded by three security guards. We peered through the gate. Isaac said we could probably swim around. “I will literally get in the harbour right now and swim for you,” I vowed to M. “100,” Isaac agreed. “I wonder if anyone’s on board now.” “Oi should we just ask?”

We called over the closest guard and asked him if anyone was on board. “The captain is over on the Waka Hourua,” he said. “Okay cool,” we said. “Shot.”

We walked back to the Waka Hourua and Isaac struck up a conversation with some of the bros including the captain of the Endeavour, an Australian fulla. We started chatting and at some point, someone brought up the protestors in Gisborne. “What they don’t understand,” the Captain said, “is that this is about our sailing history, not colonisation” and the three of us were like, ew wut?

Anyway, I shot my shot.

“Can you take us on the Endeavour?” I asked, doing a flirty face and receiving a side eye from M. “Um,” the captain hesitated, “come back tomorrow, and then we can take you on.” My face dropped and my eyes rolled back while I made an involuntary ‘ugh’ noise. “Okay,” we lied, “we’ll come back tomorrow”, knowing full well we wouldn’t.

“I don’t want to touch that yuck ship,” M said. 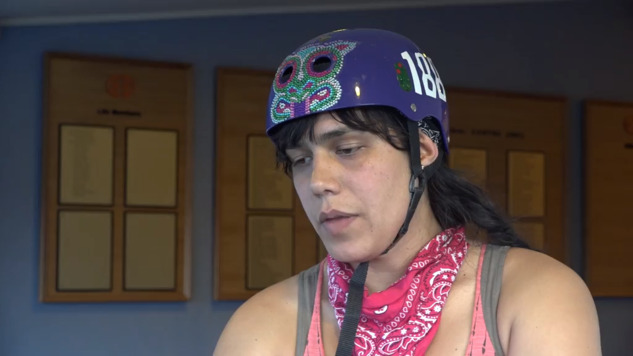