Influencers have played a significant role in the spread of Covid misinformation and members of the health and wellness community have been among the biggest superspreaders. Re: journalist Baz Macdonald investigates.

Scrolling through Instagram, a woman appears holding a smoothie and wearing a t-shirt with “vaccines are poison” on it.

She is a health and wellness influencer, and is part of an online community that has been rife with medical misinformation before the pandemic.

This online community has also become one of the hot spots of the anti-vaccination movement since the Covid-19 pandemic began.

From fitness and nutrition, to spirituality and mental health, this community covers a wide range of topics.

The health and wellness label can also be applied to those who have alternative or extreme approaches to these practices.

The health and wellness space has played a huge hand in the spread of Covid-19 misinformation and the influencers have been the superspreaders of it. 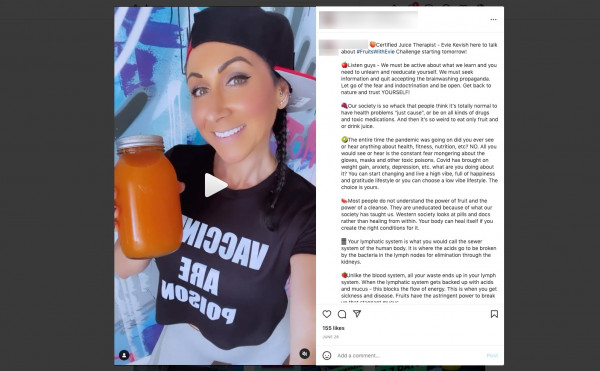 A health and wellness influencer wearing a shirt that says ‘vaccines are poison’ in an Instagram reel. Photo: Screenshot

New Zealand has been hit by a wave of Covid-19 misinformation being created overseas.

In a report on misinformation in Aotearoa, researchers at Te Pūnaha Matatini found and collated “hundreds of millions” of examples of Covid-19 misinformation being produced and shared.

The Center for Countering Digital Hate report shows misinformation is like the virus itself, it comes from single sources and then spreads like wildfire

The global non-profit organisation found 65 percent of all Covid-19 vaccine misinformation originates from only 12 people, who the report labelled the “disinformation dozen”.

Four of these 12 are well-known members of the health and wellness community, and include wellness entrepreneur and osteopathic surgeon, Dr Joseph Joseph Mercola.

Mercola has published more than 600 articles on Facebook, sharing his opinion on the Covid vaccine with his 1.8 million followers.

He uses terms like “medical fraud” in reference to the vaccines and falsely claims it genetically modifies your body.

While 1.8m followers is no joke, the real spread of his posts comes from the network of other influencers who pick up these claims and share them with their followers.

In the months following Mercola’s posts about vaccines genetically modifying bodies, these concepts began appearing in her posts. 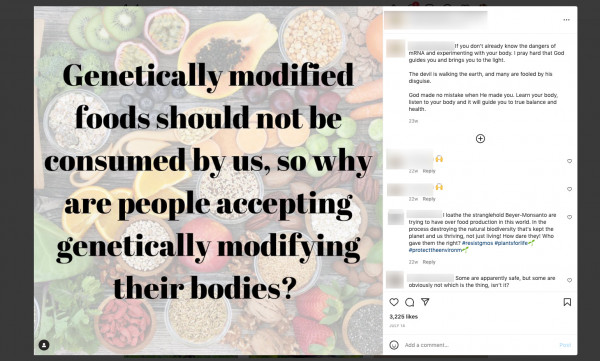 The role of the influencer

Research from Oxford University and Reuters found that while people with large social media followings, like these influencers, account for only 20 percent of misinformation posts, they are responsible for 69 percent of engagement.

Along with this research, the World Health Organisation has found that as many as 28 percent of posts about Covid on social media include misinformation.

The pandemic has revealed the vulnerabilities of allowing individuals to maintain massive followings on social media.

In the last five years, influencer marketing has exploded, growing eightfold from $1.6 billion to a projected $13.5 billion in 2021.

It is estimated there are millions of influencers with more than 10,000 followers.

And we can expect even more influencers in the future.

A 2019 survey from American market research firm, Morning Consult, found “Social Media Star” was the fourth most popular career aspiration for kids, with 86 percent saying they want to be an influencer.

As the name suggests, influencers have an incredible impact on their followers, which they use to market products and services.

Market researcher MediaKix says nearly half of Americans will make purchasing decisions based on influencer recommendations.

Dr Jess Berentson-Shaw is the co-director of The Workshop in Wellington, where she researches the way information passes through our society.

She says the success of health and wellness influencers is based on a concept called ‘health individualism’.

This is when influencers convince audiences that their beauty, success and wellness is based entirely on individual choice, actions and behaviours.

For many of these influencers, they have gained their following by demonstrating what their ‘healthy’ choices are — common examples are raw food diets and a rejection of all pharmaceutical medication.

Many influencers also make an income from this, endorsing products and services that tie-in to their health and wellness beliefs. 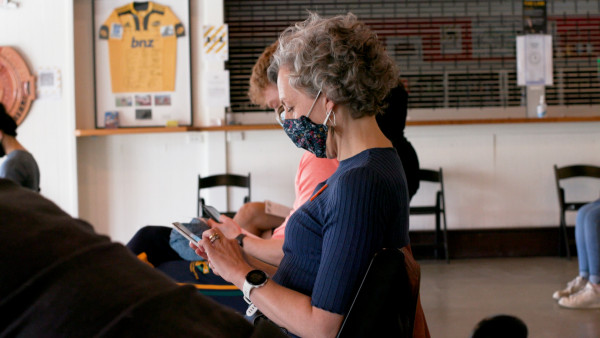 This mindset is what Berentson-Shaw believes has made the health and wellness community so vulnerable to anti-vax sentiments and medical misinformation.

Some health and wellness influencers spread misinformation purposefully — either indirectly, like wearing a shirt that says ‘vaccines are poison’ while talking about smoothies — or directly with posts and videos.

Many influencers in this space also choose to remain silent about Covid and the vaccine in fear of alienating their audience.

Re: spoke to several health and wellness influencers, and talent managers, who say they stay away from discussing Covid because the fear is that they will lose followers for speaking in support of Covid responses and the vaccine.

“What that says to me,” Berentson-Shaw says, “is that they know there is money to be made from anti-vax sentiment or at least silence, and there's money to be lost from pro-vaccination”.

“That gets to the heart of where a lot of anti-vax ideas originate and that's from people who are making money from them through alternative supplements or various strange therapies.”

The money these influencers make selling these products is also being reaped by the social media companies who are providing them a platform, Berentson-Shaw says.

She says she believes this is part of why social media companies haven't cracked down on influencers spreading misinformation.

To date, Facebook has deleted 20m posts including Covid misinformation and banned 3000 profiles for spreading it.

Yet prominent spreaders of misinformation, including Joseph Mercola, remain live on their platforms.

“I think there is a huge responsibility on them to be reining in the people who appear on these channels, who are blatantly pushing false information and harmful narratives,” Berentson-Shaw says.

Until that happens, Berentson-Shaw says her best advice is to try and move conversation about the vaccine off social media and have them in person.

Berentson-Shaw recalls talking to a vaccination nurse about how a guy turned up to get vaccinated because he was mandated to get one.

“For the first time he was sitting in front of a person who knew some stuff, having a conversation, and he talked about how much that affected his way of seeing things.”

Top Image: A collage made up of headlines, influencers, health and wellness and a post being hidden due to false information. Photo: Created by Baz Macdonald

We all know about healthy body image, but still feel shit about our bodies 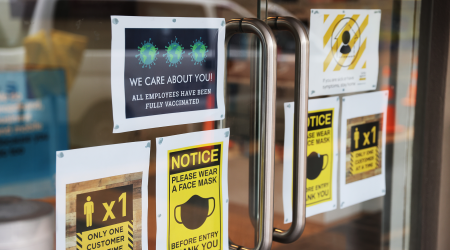 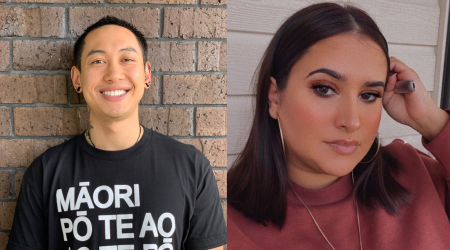