With many of the world’s best sports people stuck at home in lockdown, we’ve selected some of the best snapshots from New Zealand and overseas showing how they’re keeping up their skills without bursting their bubbles. 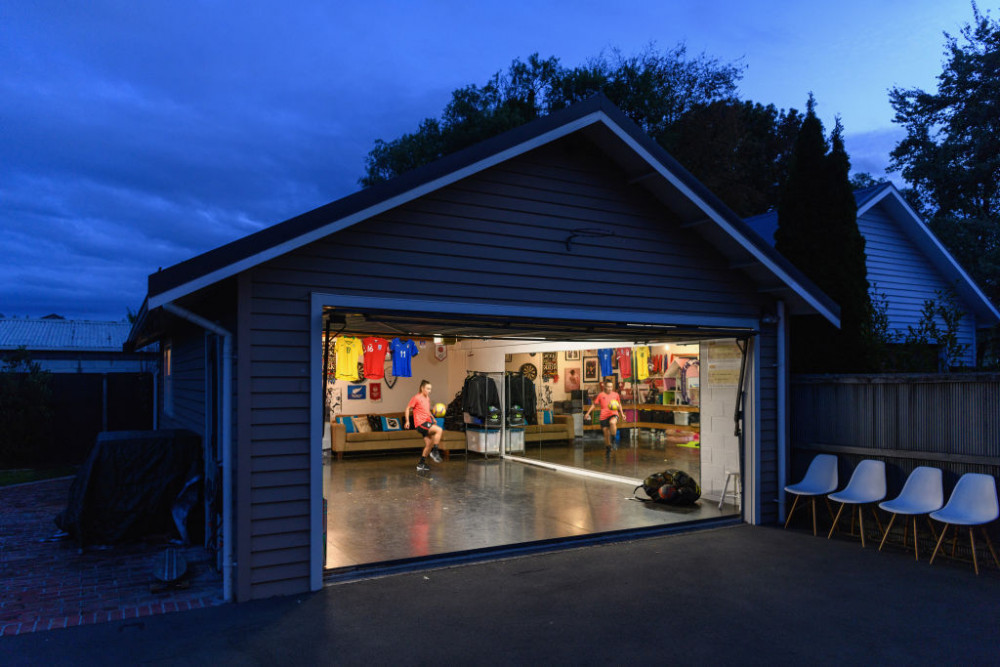 Christchurch, April 8th: New Zealand Football Ferns player Annalie Longo trains in her garage. An Olympian midfielder who was the youngest to ever play for the Ferns internationally, Annalie will be training alone until lockdown lifts for team sports at level 2. (Photo: Kai Schwoerer/Getty Images) 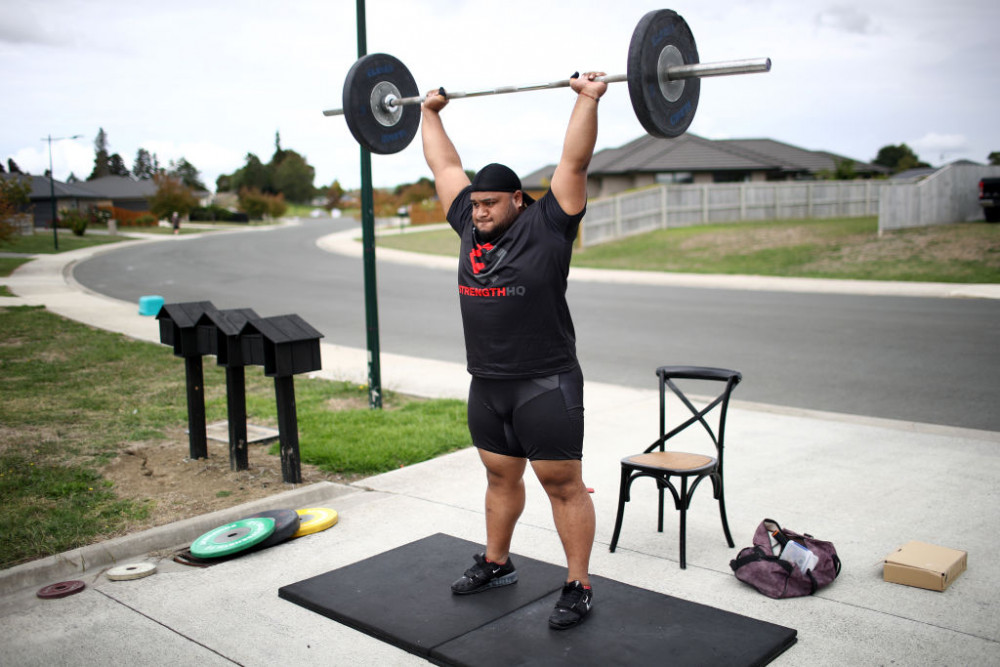 Te Kauwhata, April 8th: New Zealand weightlifter David Liti has turned the carport out the front of his house into his gym. David did a record 403Kg lift at the 2018 Commonwealth Games, earning him a gold medal. (Photo: Phil Walter/Getty Images) 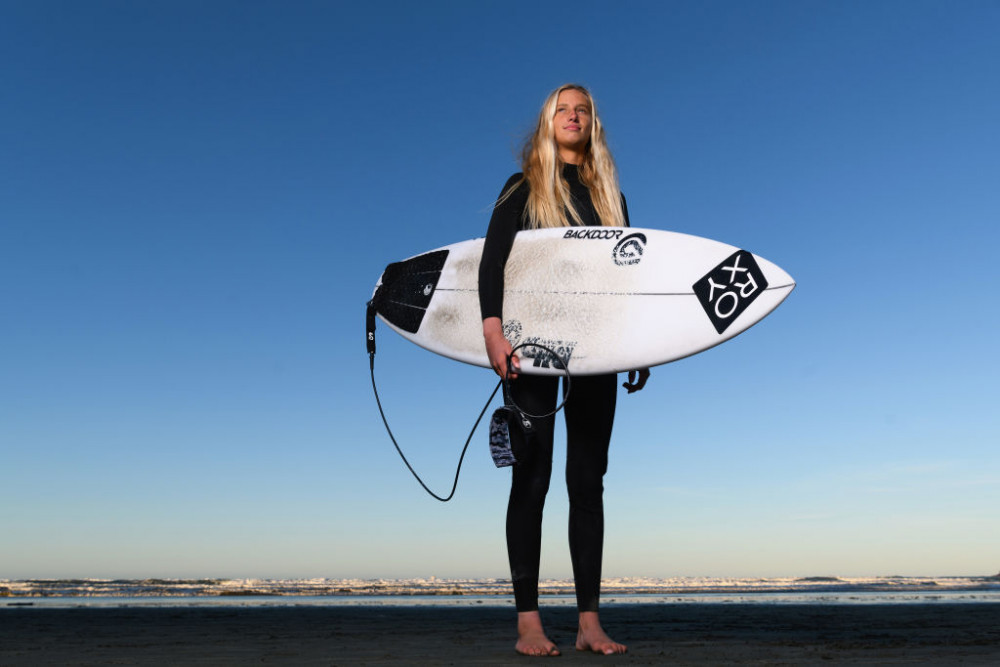 Christchurch, April 28th: Reigning New Zealand surf champ Ava Henderson enjoys her first day back on the water as lockdown restrictions ease. At just 14 years old Ava has her sights set on the Olympics, but with this year’s summer games in Japan being postponed she’ll have to wait at least another year. (Photo: Kai Schwoerer/Getty Images) 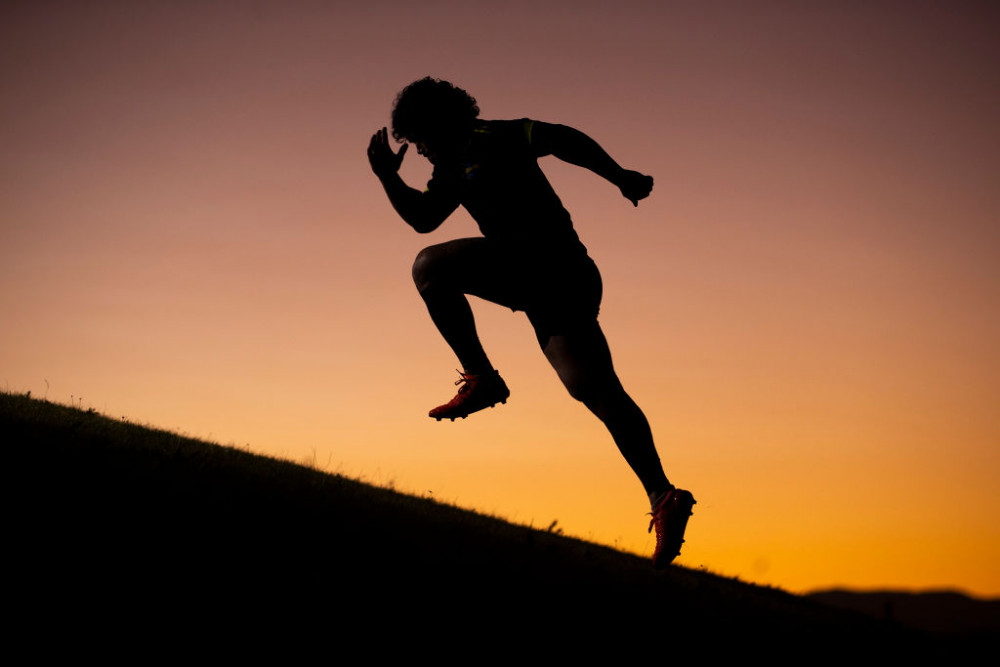 Wellington, April 29th: Hurricanes flanker Du’Plessis Kirifi powers up the hill at MacAlister park. Super rugby has been given the green light by the government to return at level 2 for a 10-week competition between local teams. All matches will be broadcast on TV from inside empty stadiums. (Photo: Hagen Hopkins/Getty Images) 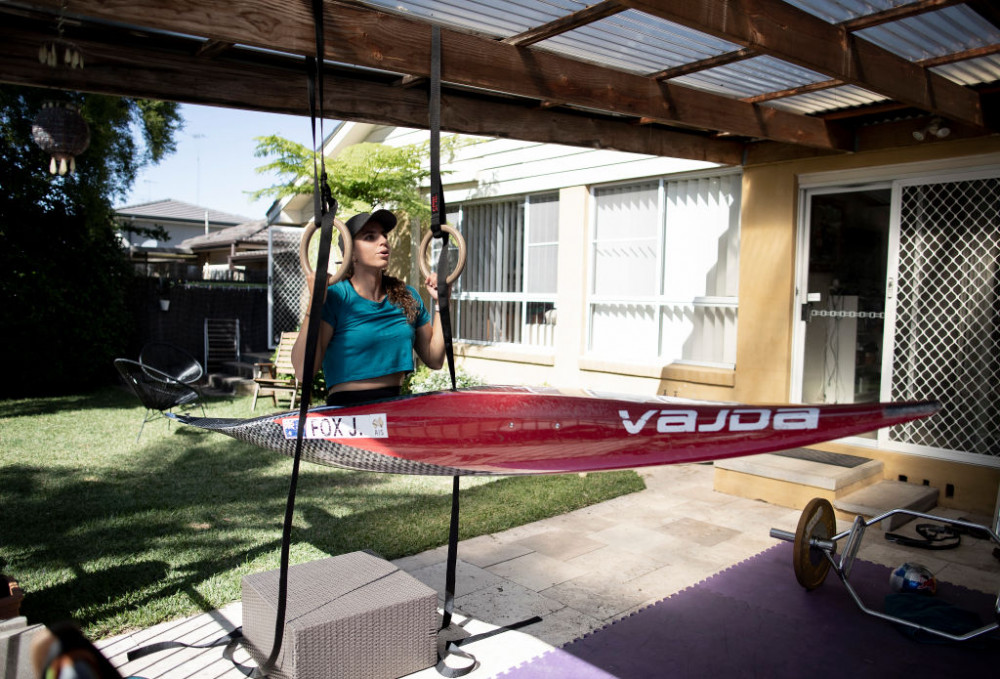 Sydney, Australia, April 18th: Growing up in a household of professional canoeists, Olympian and world cup champ Jess Fox thinks the five weeks of lockdown is probably her longest stretch away from white water since before she could walk. She’s been keeping up her skills by Facetiming her coach and practicing strokes in her small backyard pool. (Photo: Ryan Pierse/Getty Images) 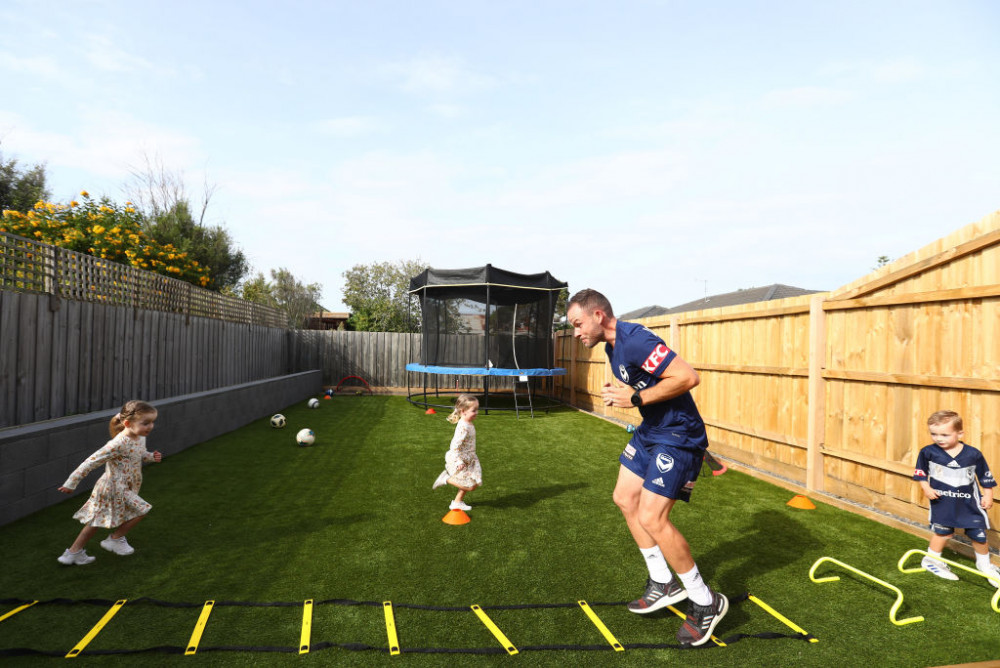 Melbourne, Australia, April 23rd: Melbourne Victory A-League player Leigh Broxham trains with his triplets Billie, Sonny and Mila in their back garden. Some sports with less than 10 players will be able to resume as Australia moves to level B but soccer teams (11 players) will have to wait till Australia moves to level C. (Photo: Robert Cianflone/Getty Images) 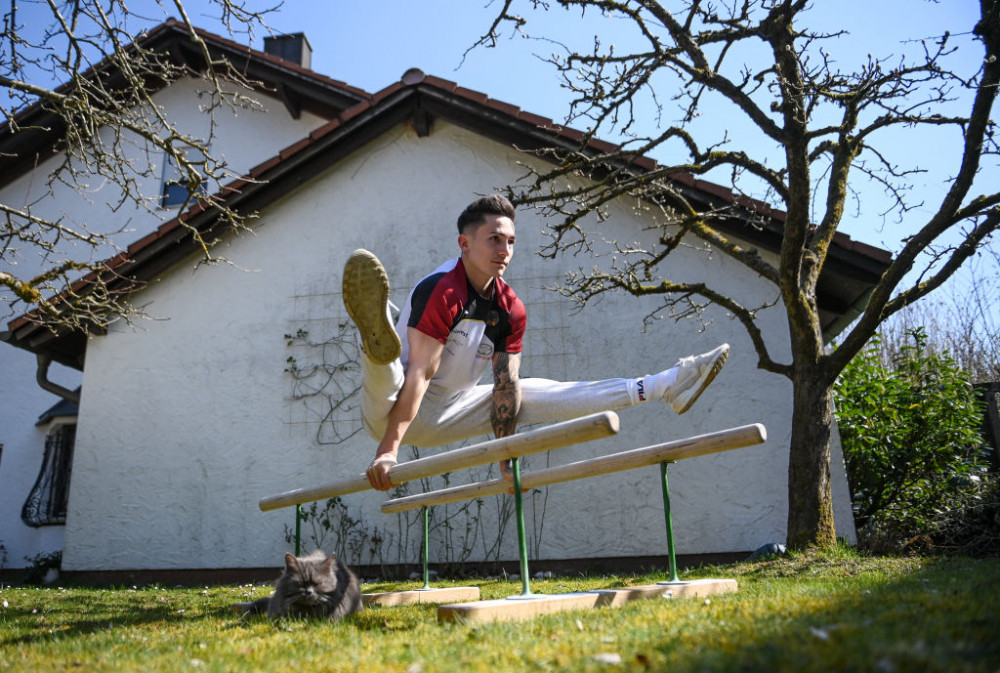 Unterhaching, Germany, March 24th: German gymnast Marcel Nguyen trains on the parallel bars in his mother's garden. The silver medalist had been training for the Tokyo Olympics while in lockdown prior to the announcement that it would be postponed. (Photo: Matthias Hangst/Getty Images) 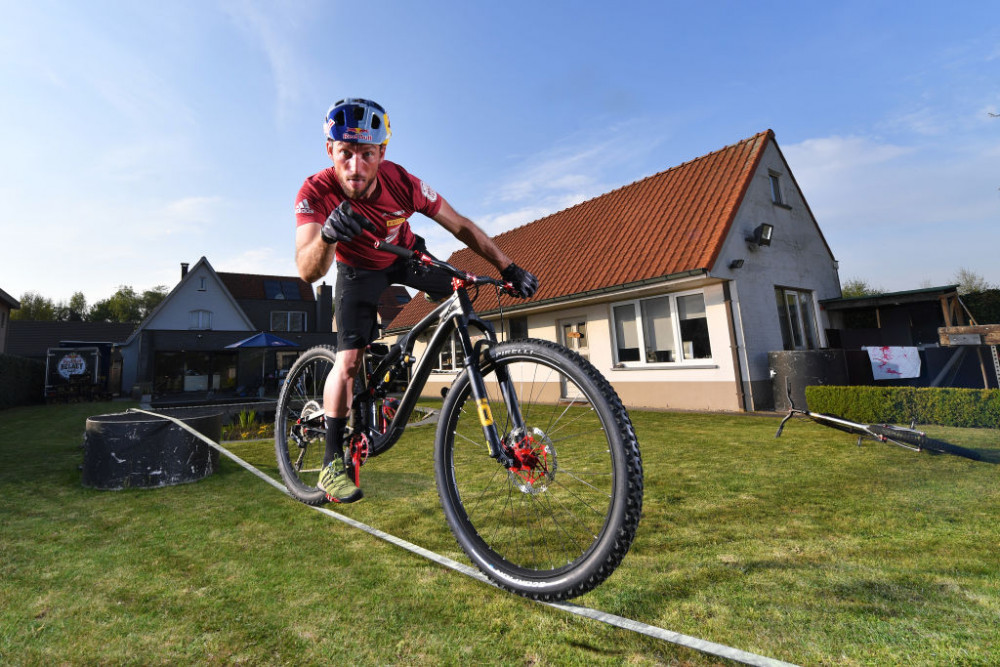 Aalter, Belgium, April 16th: Multi world-champ mountain biker Kenny Belaey balances across a slack-line strung up on his lawn. Belgium is slowly lifting its lockdown, with shops opening from the 11th of May, schools opening the following week and restaurants expected to open in June. (Photo: Tim de Waele/Getty Images) 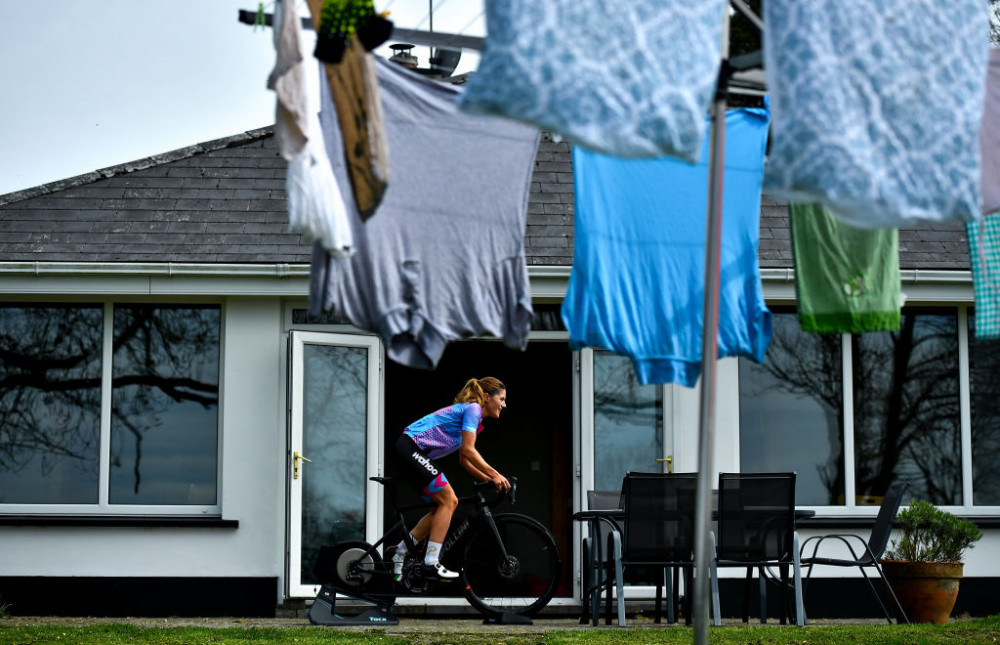 Clare, Ireland, April 27th: Cyclist Imogen Cotter is going nowhere fast as Ireland goes through its 7th week of lockdown. With all her racing competitions cancelled, Imogen has hooked up her turbo trainer to record her racing statistics so she can compete in the Zwift league virtual tournament instead. (Photo: David Fitzgerald/Getty Images) 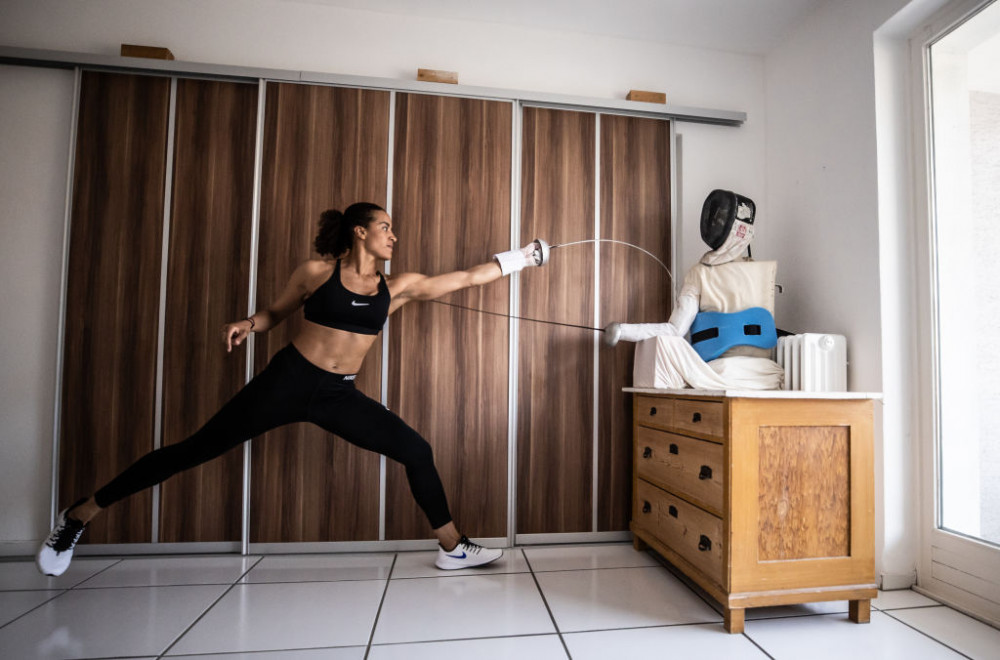 Cologne, Germany, April 9th: German fencer Alexandra Ndolo trains with an improvised opponent in her home. Alexandria is the first woman of colour to fence for Germany and is also co-founder of the Kenya Fencing Federation. (Photo: Lars Baron/Getty Images) 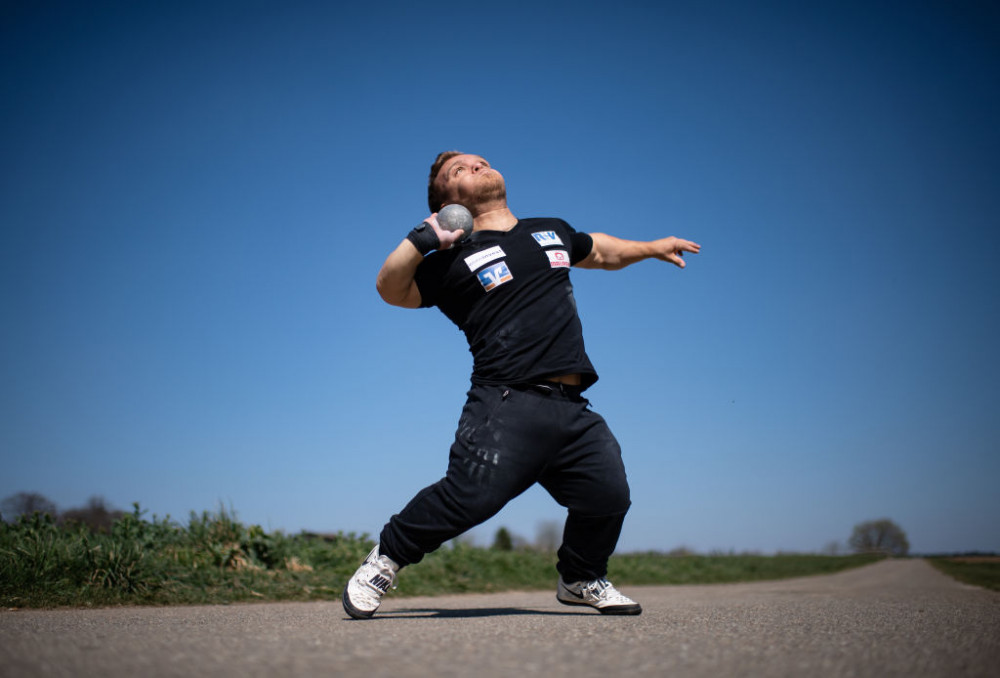 Welzheim, Germany, April 7th: German Paralymic shot put gold medalist Niko Kappel trains in a field on the outskirts of his hometown. Niko is thankful he lives in the countryside and is able to continue to practice his sport while indoor facilities are closed. (Photo: Matthias Hangst/Getty Images) 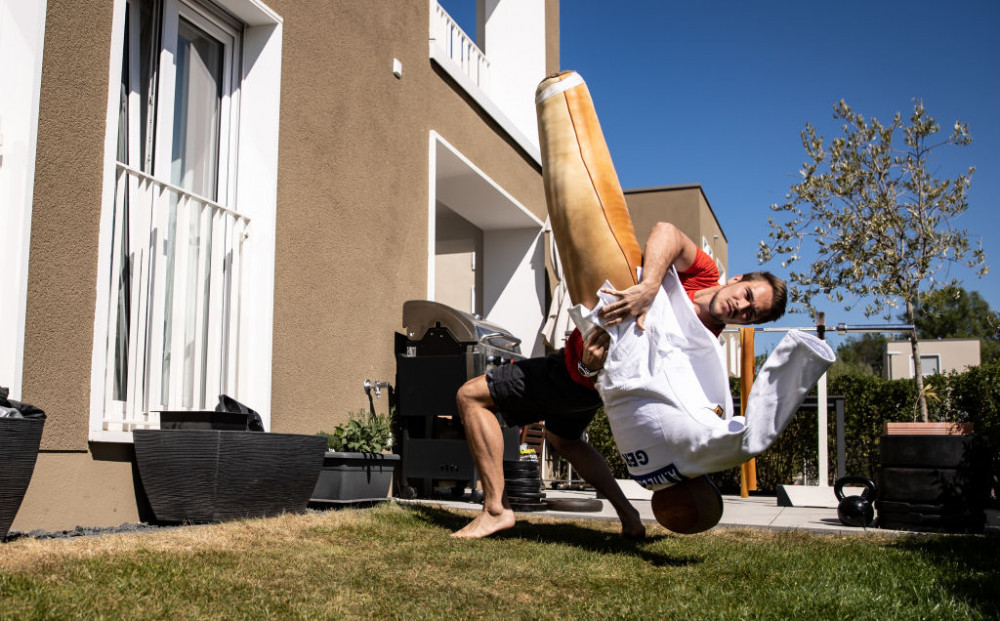 Cologne, Germany, April 23rd: World champion Alexander Wieczerzak practices judo in the garden of his apartment. Contact sports such as judo are likely to be the hardest hit because of the amount of physical contact involved. (Photo: Lars Baron/Getty Images) 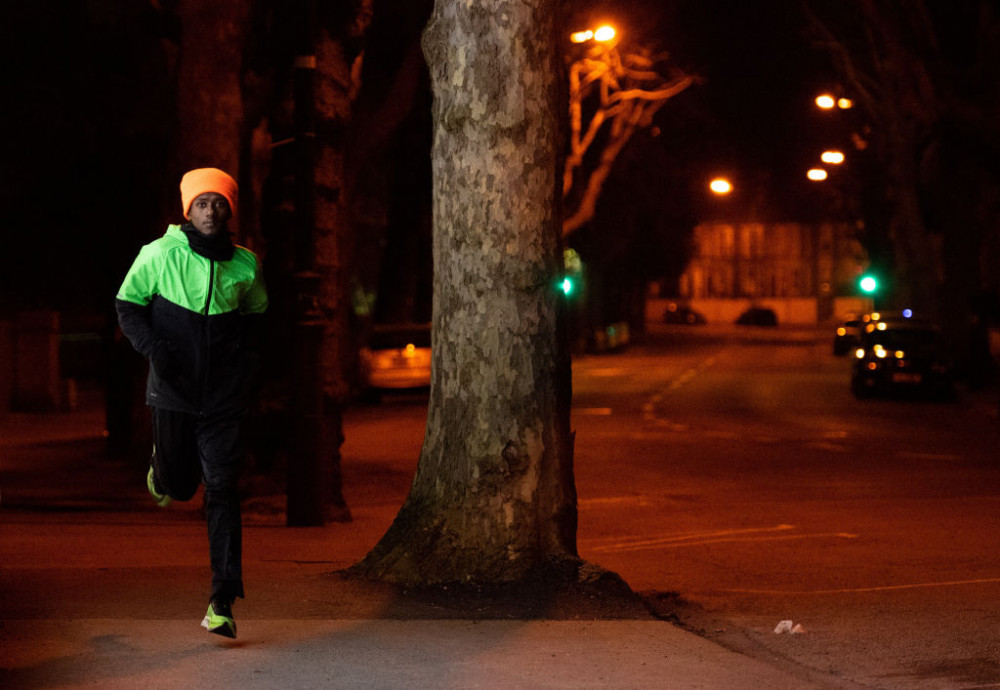 Dublin, Ireland, 26 March: Reigning Irish 5000 metre track and field champion Hiko Tonosa trains before sunrise on the streets of the Irish capital. Originally from Ethiopia he received his certificate of naturalisation at the start of the Covid-19 lockdown measures in March. Once lockdown lifts he will be able to represent the country in running competitions overseas. (Photo: Ramsey Cardy/Getty Images) 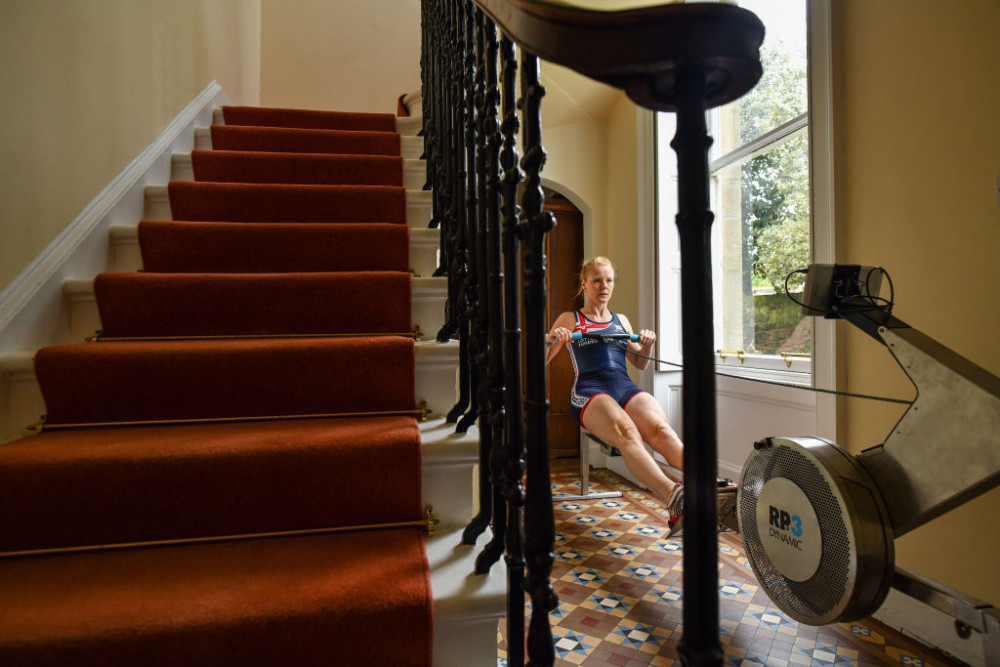 Edinburgh, Scotland, May 4th: Olympic rower Polly Swann trains at the bottom of the stairs in her parents’ house during the seventh week of the UK’s lockdown. The Scottish silver medalist has started working as a junior doctor for the NHS during the Covid-19 crisis. “I’m definitely not a frontline ICU worker, but I’m glad I can still help ease the burden in some way.” (Photo: Jeff J Mitchell/Getty Images) 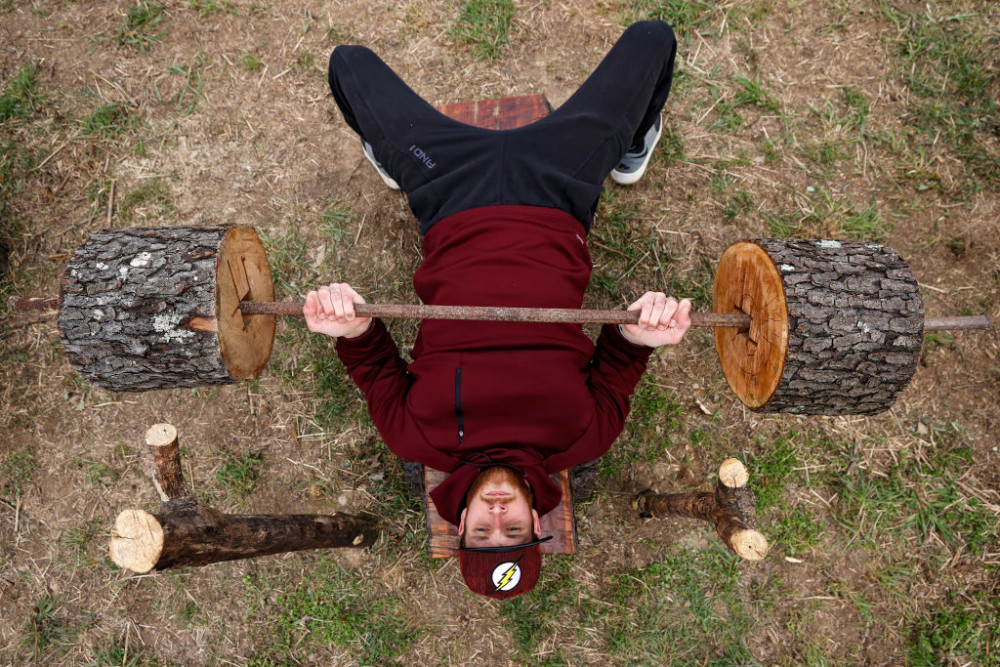 Jackson, Ohio, April 15th: Zachary Skidmore gets lumberjacked in his wood gym. The personal trainer has built a seven-station setup out of wood which includes a cable fly, bench press, treadmill and leg press while stuck at his parents’ house. (Photo: Patrick Smith/Getty Images) 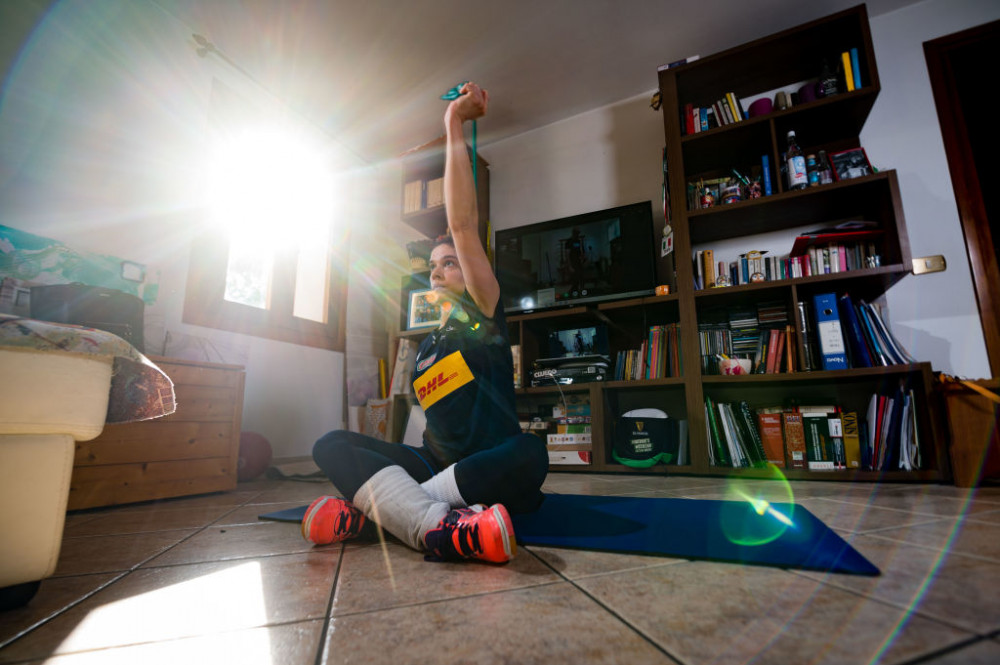 Treviso, Italy, May 2nd: Paralympic sitting volleyball player Silvia Biasi stretches her arm at her home in Italy. The northern region of Italy where she lives has been particularly hard hit by the virus, and has been under lockdown since February. (Photo: Marco Mantovani/Getty Images) 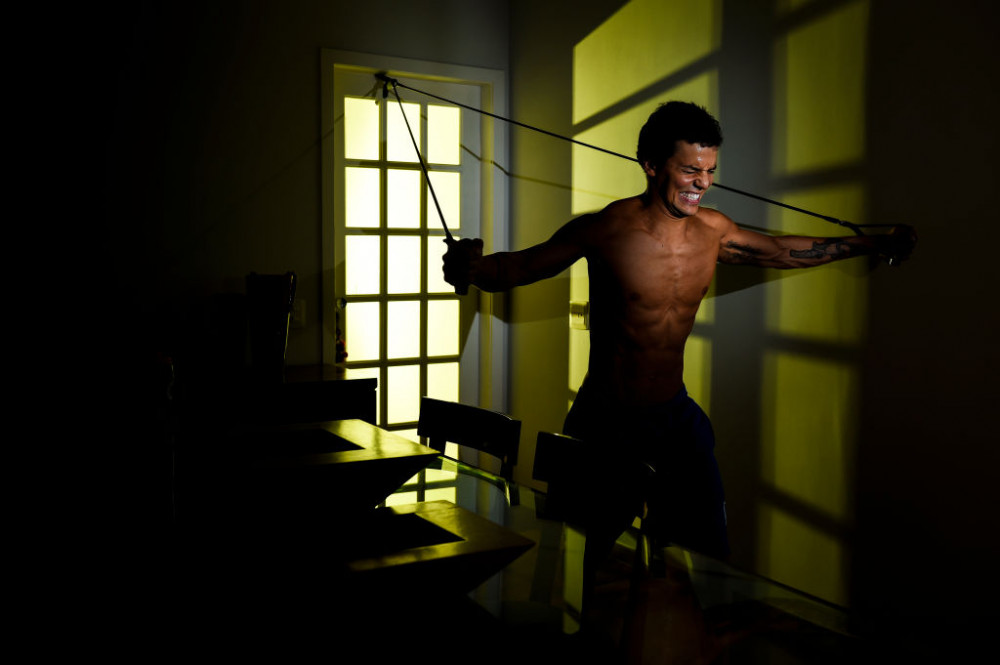 Belo Horizonte, Brazil, March 31st: Olympic swimmer Miguel Valente does resistance training against his door. As of May 5th, Brazil is seeing over 10,000 people diagnosed with the virus per day. (Photo: Pedro Vilela/Getty Images)