From a very young age I was aware that I was different. During primary school “blackie” was a term I became accustomed to. I remember the moment my Year 2 teacher Mrs Kozuls got fed up and asked me to stand in front of the class next to another student who was wearing a black t-shirt.

She explained to everyone that the colour of the t-shirt and the colour of my skin were different and therefore the kids in my class should not call me “blackie”. While for the most part her action stopped the kids in that class, the issue persisted throughout primary school.

As a six year old who had only been in the country for three years, I didn’t fully understand the meaning of the word blackie. I only knew it wasn’t said in a nice way and it didn’t make me feel good. I remember the moment walking home from school with my older sister Hussainatu, when we were followed by some of the boys from her class who shouted “Sadam Hussein” at us, jeering and taunting us to “go back to Africa”.

Then there was that moment at the shopping mall where we were kindly offered a “ride to the airport” so we could go back to where we came from. The message from these moments were clear. I did not belong. 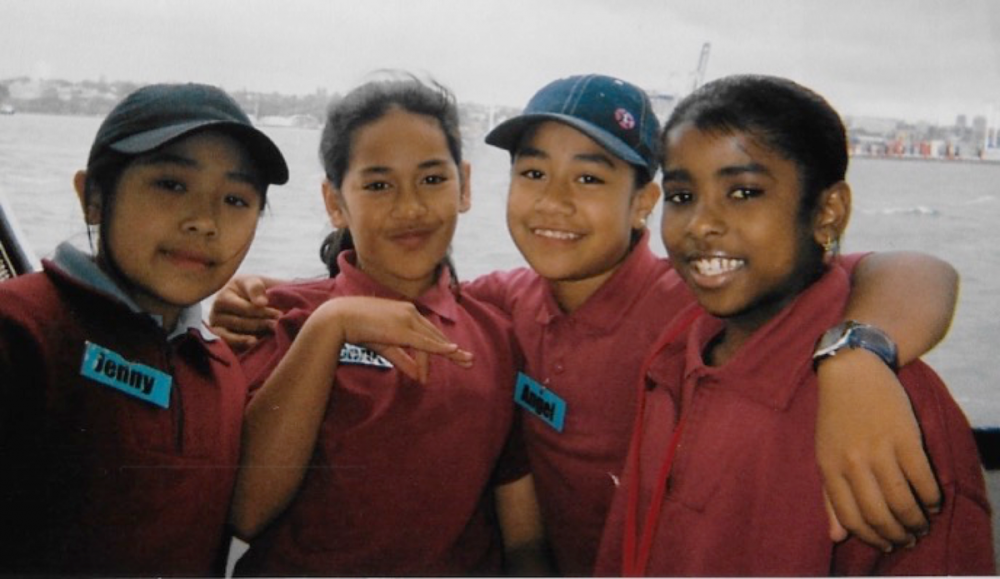 Fatumata and her friends at primary school. Photo: supplied.

I was used to being the only person who didn’t look like anyone else in the group or room. Growing up in the diverse suburbs of South Auckland, my group of friends were, and to this day are, a beautiful mixed fruit bowl. Māori, Samoan, Tongan, Indian, Niuean, Vietnamese, Cambodian, Pākehā. The difference and diversity within my friends allowed me to have a sense of belonging, to a certain degree, because I knew my difference was adding to the group. We were all different, yet the same.

Perhaps, it was those moments (and many others) that led me to a crossroad in 2013 during high school as I contemplated whether I should wear the hijab permanently and become a very “visible” Muslim or not.

Would I avoid my hijab because of the negative and inflammatory misinformation that was being regurgitated online and by media outlets about my faith? Would my hijab hurt my career? Would I get a job?

Mental health in the Muslim community

I have sickle cell anemia, a disorder that affects my red blood cells. At that time, my physical wellbeing (taha tinana) was getting better, but my spiritual (taha wairua), mental and emotional (taha hinengaro) wellbeing was taking a big hit. I was mentally and emotionally drained and exhausted. Did I want to conform to ensure my success in the society I lived in? Or did I want to strengthen my spiritual connection and take the next level to practice my faith?

I felt both options were mutually exclusive. I felt at a loss and empty, torn – seeking acceptance and validation from my peers and society, yet yearning for something more, something real and authentic.  It was during this time that I started to see the counsellor at school. This is a decision that I have never regretted - my only regret was that I did not seek one out sooner.

Mental health within the Muslim community is taboo and still rarely talked about. We often think of it as something only other people experience. It is not something that can happen to “us” because we have faith and only those who are weak in their faith or don’t have a faith can suffer such ailments.

The blurred lines between culture and religion double the stigma against mental health. Although there are numerous studies which have found faith can be a protective factor for drug use, depression and suicide; there is an increasing number of clinical diagnoses for individuals who identify as being religious.

The current mental health system is not geared to fully utilise the power of te ao Māori and other faiths in the treatment of mental health. Until we change our Eurocentric health system to have a more holistic framework that acknowledges the significance of spiritual wellbeing (taha wairua), amongst family and social (taha whānau) wellbeing, many individuals will continue to fall through the cracks and the inequities in our healthcare system will continue to widen. 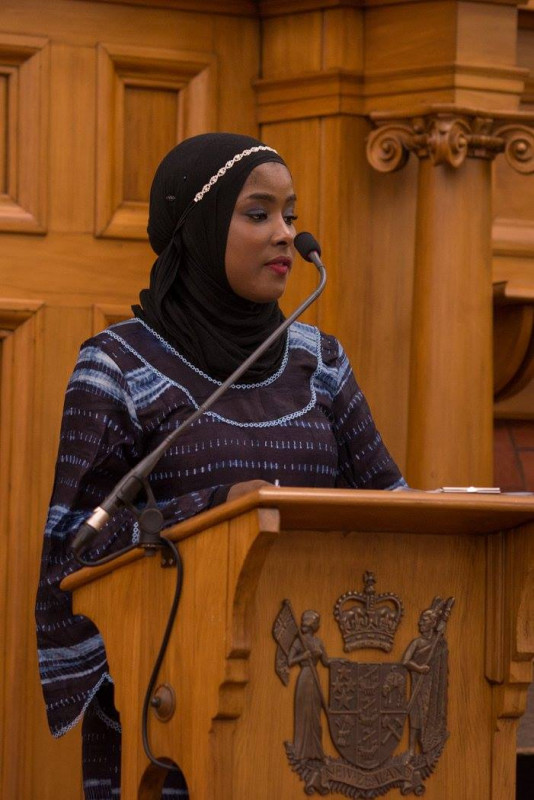 Fatumata speaking as the MC for Africa Day celebrations at Parliament in 2016. Photo: supplied

The misconceptions of Muslim women

There are many misconceptions about Muslim women, particularly those who wear the hijab (headscarf). It is ironic that hijabis (women who wear the headscarf) are stereotyped as meek, shy and submissive. Of all the hijabis I know, none of them could be described that way.

Mainstream media would have you believe that the hijab is restrictive and a tool to oppress women. While I can’t speak for all women who wear the hijab, particularly for those who have had the hijab imposed upon them, I would argue that from my personal experience, the hijab does the exact opposite.

My hijab gives me mana and the freedom and confidence to walk in the world as I am, without a care to conform to the highly unrealistic beauty standards of society. I walk with my shoulders back and my head held high because I am a visual representation of what I believe and what is important to me.

How the Christchurch terror attack impacted my own mental health

It does not surprise me that a Netsafe study from last year found hate towards Muslims increased post March 15th. Although the majority of New Zealand responded with compassion and solidarity towards the Muslim community following the Christchurch shootings, the reality is that some individuals with deep-rooted Islamophobia were emboldened.

I remember watching in horror the live reporting from Christchurch, moments after the shooting, when a man in a white van had driven to the crime scene. As the reporter crossed live, the man proudly declared that he had come to the scene to celebrate.

I later learned that many individuals in New Zealand were sharing the shooting footage online, revealing their joy in the occasion. Until that moment, I had never felt that my belief would put my life in danger. Until that day, I had never felt that New Zealand would be a country where I wasn’t safe. As a former refugee who fled a civil war and sought refuge in New Zealand, it was unfathomable to me that my place of refuge could one day become the place of danger.

In the days following the Christchurch shootings, I found myself being hyper-vigilant, looking for suspicious behaviour around me. I was on edge and anxious and I took a few days off work.

The first time I entered a mosque after the Christchurch shootings was a month later, during the holy fasting month of Ramadan. I was in Philadelphia in the United States. I was taken aback as I passed two heavily-armed security guards when I entered the gates of the mosque. It was wrong. So wrong. It did not make sense that a place of worship, piety and peace had to be guarded with guns and ammunition.

As I bowed in sujood during my prayer I couldn’t help but think about the 51 lives lost. What were their last thoughts? What were their last prayers? I spoke to my father on the phone soon after and he told me our local mosque had a marked and unmarked police car parked in the front and NZ Police officers standing guard too.

Our world as we knew it had changed. I was fortunate that I had a friend who also happened to be a clinical psychologist. We talked about grief, feeling guilt and the tolls of servant leadership. Being asked to stand up and speak, to provide hope and guidance when you really felt vulnerable and broken.

The seeds of Islamophobia and hate that were unleashed during the Christchurch shootings is fuelled in part by the divisive and dangerous narrative that is present in some reporting by the media.

A study found that in 2017 alone, five Australian newspapers owned by NewsCorp had produced 3,000 stories associating words like terrorism, violence and radical to Muslims and Islam. Every second day there was a front page that demonised Muslims and Islam. Perpetuating a narrative of danger and incompatibility between Muslims and our society has very real consequences for those who practice the religion and who are increasingly on the receiving end of islamophobic microaggressions and violent hate crimes.

News headlines are quick to identify perpetrators with Islamic names as Muslims, saying their crimes are undoubtedly acts of terrorism fuelled only by religious scripture. Rarely is the radicalisation or geopolitical influences of the perpetrator analysed or the distinction between extremism and Islam explored.

In comparison, when a “hate crime” is conducted by an individual who is not Muslim, it’s rarely identified as an act of terror. The perpetrator’s religion or ethnicity is not included in the headline. The perpetrator has the privilege of their mental health status to be taken into account and analysed. Their upbringing, lived experiences and the traumas of their past are considered.

The New Zealand media’s response to the Christchurch shootings is an example of how we can do better. Following the incident, the voice of the Muslim community in Aotearoa was amplified and put front and centre. Our voices were finally being heard and we were finally being acknowledged as a thread of the rope that makes Aotearoa, New Zealand. We need to continue to provide the platform for our diverse lived experiences to be heard, listened to and validated.

We need to build a mental health system, and a society, where Muslim kids feel valued

2020 feels like humanity is at a crossroads. We have the opportunity to allow the best of us to shine through as we work towards recovery and a more just society, or we can regress into the depths of despair that is the widening gaps between rich and poor, the increasing inequities within our health system and the continued degradation of our rivers, oceans and earth.

The recent death of George Floyd at the knee of a police officer in the United States has sparked protests around the world and ignited discussions about racism and discrimination in all forms. It is no secret that racism and discrimination can increase the risk of mental distress and mental illness. This is particularly true for young people who are most vulnerable as they navigate their identity journey.

As we look to our organisations and institutions to address the discrimination imbedded within the system, we must simultaneously look within ourselves, acknowledge and confront the biases that we carry. For at the end of the day, we are a small part of a larger establishment. We get to decide whether we want to be a part of the problem or a part of the solution.