Post-nut clarity is a common concept among young people, yet there is no research to understand the phenomena or its implications on sexuality and sex culture. Re: journalist Baz Macdonald dug into how uni students interpret post-nut clarity, and the impact they think it has on our culture.

The internet has given rise to many charming phrases, but few have described a concept better than post-nut clarity.

If you haven’t encountered this phrase before, the most common definition is a period of clarity a man experiences after orgasming. 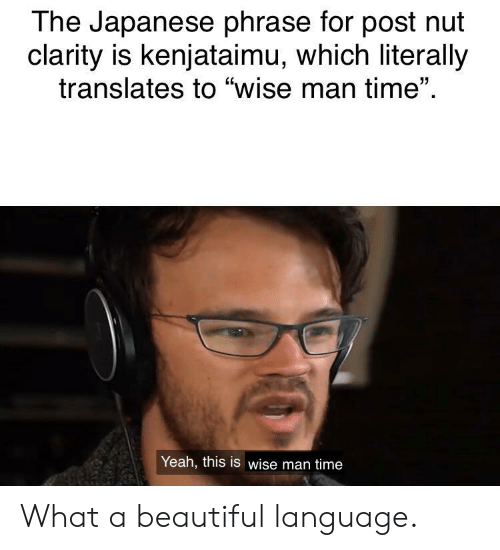 It’s likely the phenomenon is as old as the human penis itself, but Reddit and copious memes have recently put into words what so many blockbuster movies were trying to describe. It’s like the scene in There’s Something About Mary where Ben Stiller’s character gets told to have a wank before his date, leading to the infamous hair gel moment.

By giving it a name, the concept has achieved a new-found cultural recognition. I spoke with dozens of university students and found that almost all of them, boys and girls, were familiar with the term and concept (a lot of them intimately, you know what I mean?)

Yet, despite this near-universal recognition, researchers say no specific study has been done to understand the phenomena or its implications on sexuality and sex culture. So, I took it upon myself to dig into how uni students interpret post-nut clarity, and the impact they think it has on our culture. 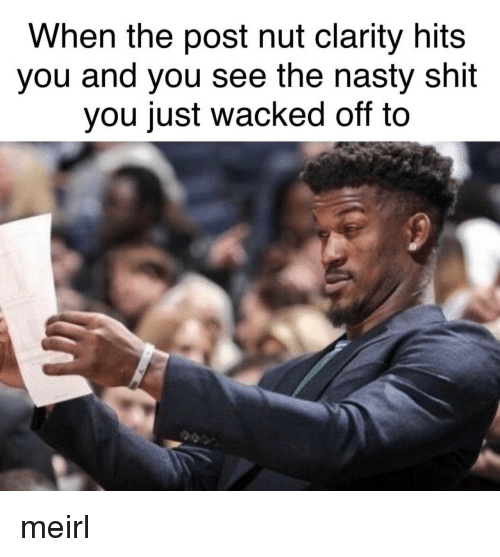 A lot of the men I spoke with could relate to this example. One young guy eloquently unpacked to me how this phenomena relates to his own mastabatory habits.

“It can be hard to meld your normal nine-to-five self with your sexual self. It’s a different beast,” he said.

Quite a few said that it was only after finishing they really reflected on the fantasy of the video they had just watched, and that’s when the feelings of discomfort and disgust washed over them. 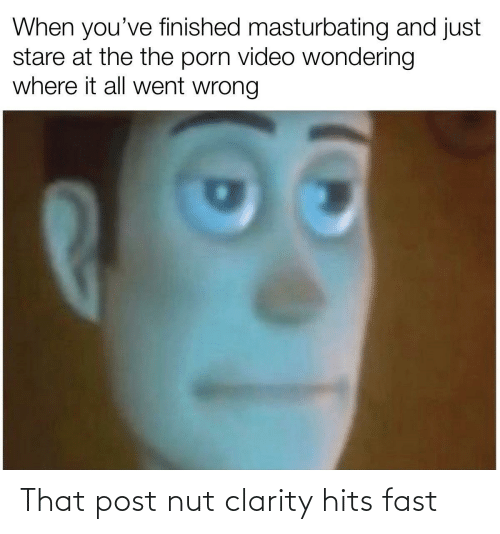 One guy described the post-clarity he experienced as like taking blinders off. Blinders are the mask put on a horse during a race so its view is narrowed only to what is in front of them. When he was mid-wank, his thoughts were focussed only on the arousing aspects - a naked figure, or a sex act. Then after orgasming, the blinders fall off and suddenly all of the context around that video was visible to him.

But these guys were describing a switch from a bad feeling to a good feeling, describing it as a “return to equilibrium from a chaotic headspace” and “a liberating release of tension”. 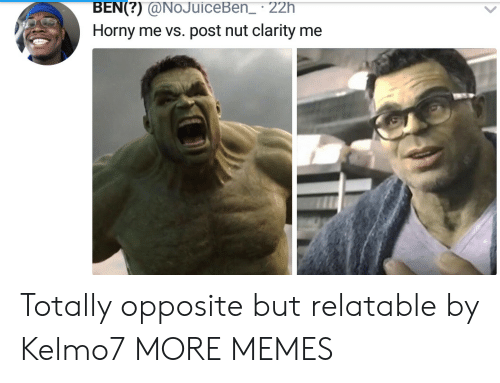 “I don’t even think of it as a sexual experience. It’s more of a mindfulness, wellbeing experience,” one guy said.

His mate agreed with him, saying “it’s an intimate moment, where someone recognises themselves more fully, and can go deep into their thoughts”.

A quick side-note, I hope you are all as impressed as I was by the openness and eloquence of these twenty-something-year-old dudes. 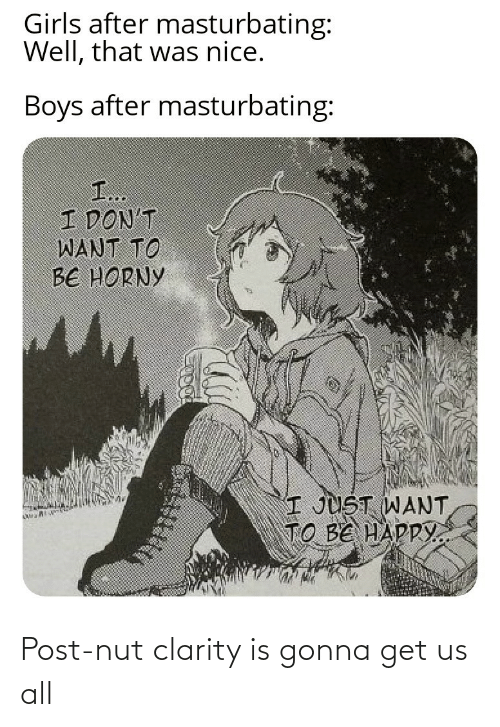 There’s a famous scene in ‘The Wolf of Wall Street’ where Matthew McConaughey teaches Leonardo Di Caprio the key to success in the broker business: wank twice a day.

This scene feeds into the notion that an outcome of post-nut clarity is that people are more productive, decisive and energised. 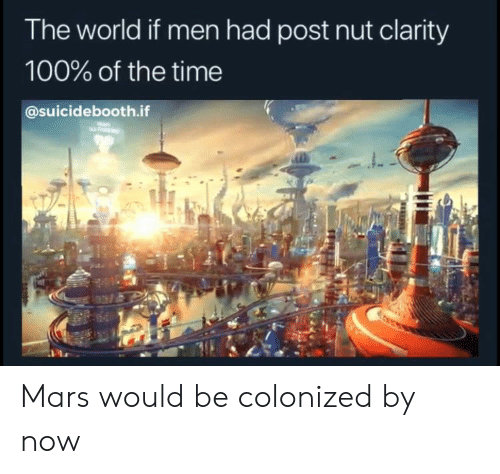 But it’s not clear this is the case, with some claiming it is actually abstaining from orgasms that makes people more productive.

But for some of the students I spoke to, they certainly felt like it was true, associating post-nut clarity with feelings of motivation, decisiveness and productivity. As students, quite a few of them noted how helpful a wank can be for getting your second wind while studying.

Another theme was how useful post-nut clarity was for clarifying your thoughts on relationships. One student said that if he’s interested in someone, he’ll have a wank while thinking about them. If he isn’t interested anymore, it was lust, but if he still is, his feelings are real. 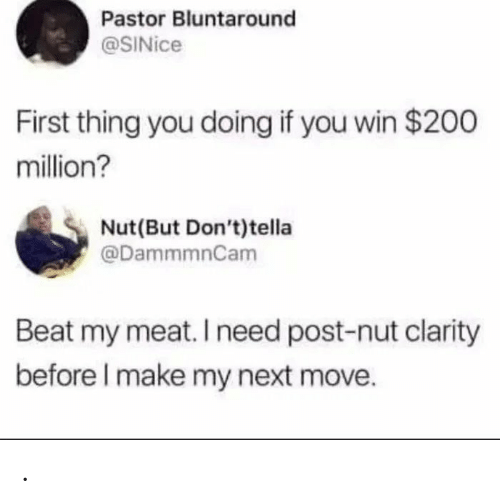 One woman I spoke to described what it was like for her when men only had this kind of self-reflectiveness after sex.

“All of a sudden their perspective changes to ‘that was fun, but we shouldn’t do that again’, or ‘that was a mistake’. But they can only communicate that to you after they have used you for something,” she said.

A few people had concerns about how post-nut clarity could be used as an excuse.

One man even questioned if the concept has been overblown to allow men an excuse for engaging in behaviour they know they shouldn’t be.

“Maybe it justifies to some people treating somebody in ways you shouldn’t; objectifying people, messing with someone’s emotions just for sex, sleeping with someone who is too drunk, and then saying ‘oh! I was just guided by my horniness’.”

He thinks that, despite no research proving its existence, the way post-nut clarity resonates with so many people indicates it is a real experience for them.

However, he says we need to be careful about how we discuss it.

“The concern is that men will do something, at the worst illegal or heinous, and then think they can blame it on some kind of biological drive - which of course is no sort of justification for that behaviour.”

Rather than lean into this notion that men are single-minded sex machines, Kris says we need to reinforce the fact men’s sexuality and emotions are nuanced, and that men are fully capable of understanding context regardless of their state of horniness.

Kris compares it to shopping at the supermarket hungry. It’s a common idea that this will lead you to buy unhealthy food. But it’s not that in the moment you don’t know what the healthy choices are, you are just more susceptible to the unhealthy options.

“Even when you’re in the supermarket hungry, you are making a series of decisions and justifying them to yourself. That isn’t being out of control.”

“[With post-nut clarity], like being hungry in the supermarket, you could still make those good decisions, and we should encourage men to make them.”

This story is part of Re:'s Pleasure Week. See here for more stories about pleasure and sex, from bridging the pleasure gap between women and men, to teaching straight men the joys of butt play to kākāpō sex helmets.

I tried Shibari, the kinky Japanese art of rope bondage 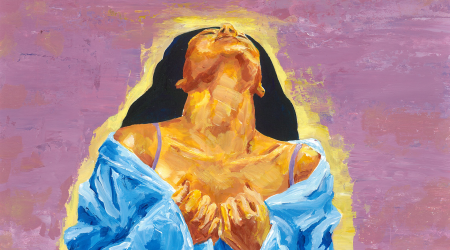 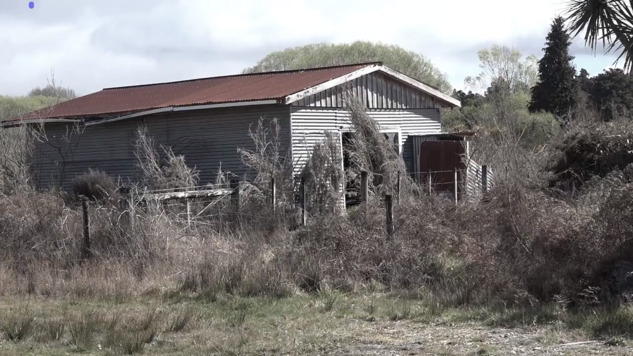