“You need to move, or I’ll run you over,” a middle-aged man screams out his car window.

14-year-old Oliver* yells back: “If you run me over, that's not gonna end well for you or me.”

The two are in a stand-off at the entrance to a busy beach car park in South Dunedin.

It’s 9am on a Sunday morning and Oliver has been here for hours turning away all petrol and diesel vehicles. Only the electric or hybrid ones get in.

He’s strung danger tape between two signs demanding an end to burning fossil fuels in cars, blocking off the entrance.

It’s the second time Oliver has done this protest in a month. He estimates he’s turned away around 160 cars that morning. He hopes a disruption to people’s beach recreation will remind them of the need to transition our vehicles away from fossil fuels.

Most just give him confused looks and drive away, while others engage him in conversation about his cause. One man offered him “a large sum of money” to leave.

The Dunedin Esplanade near where Oliver’s protest took place

But many others respond with anger - rolling their eyes, saying “Ugh! Another of these kids”. Or winding down the window and screaming “burn the fossil fuels”.

Now, staring down a revving car with a male driver, Oliver is facing his biggest challenge yet.

It drives straight at him. “[It’s] not quite full speed, but still decently fast,” Oliver tells Re:.

He stands his ground until the car is nearly on him. Then realising the driver isn’t slowing down, Oliver gets out of the way.

The car, now in the car park, turns around and speeds off the way it came.

“I have a feeling he didn't want to park his car at all,” Oliver says.

“He was just there to get angry.”

Fighting for the future

Oliver holds these carpark protests because he has real concerns for his future.

This beach in South Dunedin is one of New Zealand’s most vulnerable areas to the effects of climate change.

Behind it is a basin where 10,000 people live, work and go to school, including Oliver.

Although that basin is on the shoreline, it is actually below sea level and is only protected from the ocean by the dunes surrounding it - the dunes Oliver is protesting in front of.

His entire life, Oliver’s world has always been one bad storm away from being flooded. And as sea levels rise, the likelihood of that flood only gets higher and higher. 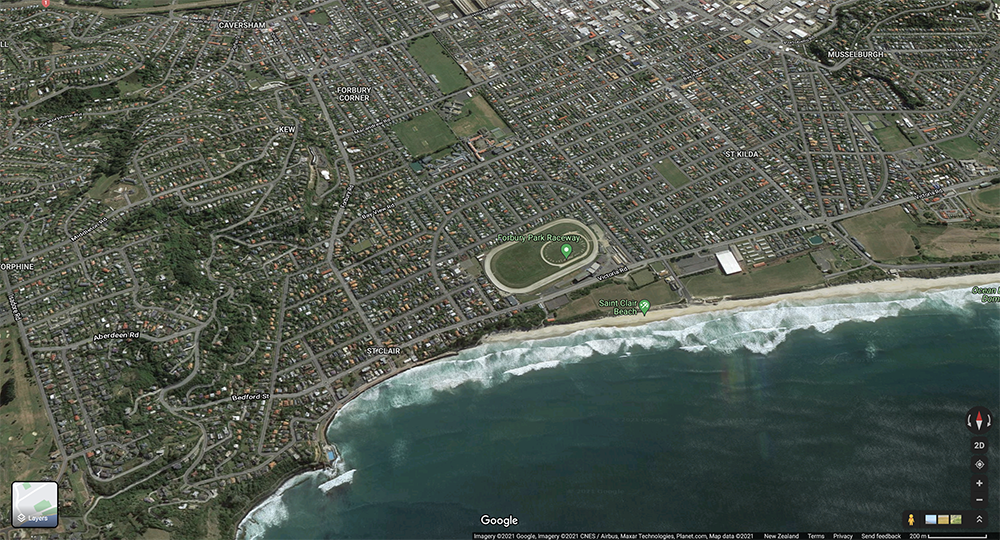 The St Clair beach in South Dunedin, with the basin behind

That’s what motivates the 14-year-old to dedicate his Sunday mornings to asking his community to think differently about their cars.

But what motivates people to yell, sneer, and run their cars at people like Oliver?

Are we really that attached to our cars? And if so, will that stand in the way of us meeting our climate goals?

At the 2018 census, nearly 60 percent of New Zealand households had two or more cars.

In August 2021, Waka Kotahi The New Zealand Transport Agency data showed there were more than 4.4 million passenger vehicles in New Zealand - cars, utes, vans, and SUVs. That’s 843 vehicles for every 1000 people in the country.

Per capita, this puts us in the top five vehicle-owning countries in the world.

In fact, if you exclude small tourist nations like Monaco and San Marino, per capita, we may be the largest vehicle owning nation in the world.

Dr Mohsen Mohammadzadeh is the director of the Urban Planning Programme at the University of Auckland. He says the way we have built our country is so private-vehicle focussed that our relationship with cars has evolved beyond a means of transport, and into a form of identity.

“Some people identify themselves with their cars - they have an over-attachment to their cars,” Dr Mohammadzadeh said.

The rise of big SUVs

Broadly speaking, there are three different types of passenger vehicles: cars, SUVs and light commercial vehicles like vans and utes.

In 2002, the majority of new vehicles sold in New Zealand were cars, at around 65 percent.

SUVs only made up about 15 percent, and light commercial vehicles around 25 percent.

Dr Mohammadzadeh said through marketing, these types of vehicles have become associated with wealth, adventurousness and masculinity.

It’s why some people react angrily, even aggressively, when we propose a change to our car fleet and transport infrastructure, Dr Mohammadzadeh says. It feels like an attack on their way of life and identity, rather than just a transition to a new transport system, he says.

“So we need to consider when we create plans and policies that some people will object because it's part of their identity.”

The Ministry of Transport has also acknowledged the role this culture will play in our move towards a lower emission car fleet. It states in its working document on emissions that “car ownership in Aotearoa is intrinsically tied to socio-cultural identity”.

“There will be behavioural factors such as the look and feel of vehicles that will also be a continuous barrier to uptake of clean vehicles.”

Motor Industry Association chief executive David Crawford says there are also practical reasons why we have adopted heavier vehicles and why many are reluctant to give them up.

He highlights that the rise in SUV purchases has gone hand-in-hand with an aging population.

“For older people the ease of getting in and out - you slide in and out of them rather than sitting down into them and then having to lift yourself out.”

As for utes, industry surveys have shown that 70 percent of utes are still sold to trade - so they are still primarily being bought for the utility they are named after.

These heavy vehicles have improved their engines over the years to be cleaner, David says.

However, they’ve also become bigger and heavier, which is why utes remain the highest-emitting passenger vehicles on our roads.

Our cars and climate

Currently, more than a fifth of our national emissions come from transport, and almost 70 percent of that comes from our personal vehicles.

New Zealand has committed to doing its part in limiting global warming to a 1.5 degree rise above pre-industrial levels. If temperatures go above this, sea levels will continue to rise, and the world will experience increasingly devastating waves of extreme weather events - fires, floods, and droughts.

To do our part in meeting this limit, we need to be absorbing as many emissions as we emit by 2050. That means changing our personal vehicle habits as they’re the largest way we individually contribute to emissions.

Unfortunately, we haven’t reacted well to even small changes to our vehicle fleet. In June 2021, the Government announced incentives to shift our vehicle fleet away from petrol and diesel and towards electric vehicles. People buying electric vehicles were entitled to a  rebate of up to $8625. On the flipside, people buying high-emitting vehicles like heavy utes would pay an extra charge of up to $5175.

News coverage of the changes prompted overwhelmingly negative reactions in comment posts, with many showing heavy resistance to these changes.

Among the dissent, there were three different camps of commenters - those with legitimate concerns, those with concerns based on incorrect information, and those who would have their fossil-fuel vehicles peeled out of their cold dead hands.

Of the legitimate concerns, the most prominent theme was about how and when New Zealand could accommodate this many electric vehicles and their charging stations.

Some highlighted how many charging stations we currently had, and how many more would be required to keep up with an influx of electric vehicles across the country.

Other concerns were more specific, such as how people who had to street park would charge when at home.

Currently, there are 256 EV charging stations nationally, with 24 more planned for construction this year. Whereas there are almost 1300 petrol stations, with many pumps per station.

While fast charge stations can charge a car to 80 percent in just 15 minutes, many commenters pointed out this was 15 times longer than refilling a car. Their concern was that even if we matched the number of charge stations to petrol pumps across the country and replaced our cars with EV’s, charge times would likely create a bottleneck at stations.

The cost for remedying that infrastructure gap is also significant. The Ministry of Transport estimates it will cost between $5-9 billion to create the charging capabilities for a primarily electric vehicle fleet.

Then there were the comments based on incorrect assumptions. For instance, the idea that creating power for these electric vehicles would require burning coal at power plants, which is more harmful for the environment than the cars.

However, research has shown using coal to create power for our cars would still result in less emissions than our current vehicle fleet.

They are correct, however, that significant investment would need to be made to keep up with increased energy demands of an electric vehicle fleet - an estimated $8-12 billion to produce enough renewable electricity.

Finally, there was the ‘liberty or die’ contingent of New Zealand dissenters. Those who opposed any cleaning up of the vehicle fleet, and claimed nothing would come between them and their vehicles.

Getting us all onboard

If there is such fierce commitment to our current car culture is there any hope for a net-zero future for transport emissions?

Yes, but it requires a culture shift, which is never easy.  Underpinning that is policy change and significant infrastructure investment which make electric cars the best option for the majority of people.

Simon Kingham is a professor in urban environment at the University of Canterbury and the Chief Science Advisor to the Ministry of Transport.

He uses bicycles and cycling culture as an example.

“What's the line from ‘Field of Dreams’?” he laughs. “Build it and they will come.”

“There's about three percent of people if you just make it a little bit easier, maybe put a little white paint on the road, that will encourage them to cycle,” Simon says.

“At the other end, you've got about 30% of people who will never cycle. Whatever you do.”

“But what it means is in the middle, you've got this big group of 60 percent, who actually say, ‘I would like to cycle if I felt the environment was right for it’. For cycling, that tends to mean if they feel safe.”

That is what infrastructural investment could do for electric car culture in New Zealand. Like with public transport, when electric vehicles become the most affordable, most comfortable and enjoyable option, there is a massive contingent of people who will happily make the switch.

Sadly, that means that Oliver and other environmental activists are always going to be received with anger and resentment by that 30 percent who will never make the switch.

But Oliver and the Government can still change the hearts, minds and motor vehicles of the 60 percent open to it.

As they do, the culture should naturally shift, and move us one step closer to a net-zero Aotearoa.

* Oliver did not want his surname used.

Rangatahi react to eating tītī (muttonbird) for the first time