Two years on from the terrorist attacks on two Christchurch mosques, the Human Rights Commission has released a report raising concerns about human rights breaches in the government’s ongoing response.

The Human Rights Commission report explores shortcomings of the Royal Commission of Inquiry into the mosque attack, specifically around accountability for the attacks and reparation for victims, survivors, witnesses, and their families.

“The Government… has a critical human rights duty to ensure the rights of the affected whānau, survivors and witnesses to reparation and access to justice are met,” the Human Rights Commission says in their report.

The Commission commended the government for launching the Royal Commission of Inquiry, apologising to survivors, and making changes to things like gun laws.

But it is calling for a reparation programme to be established. The United Nations passed a resolution in 2019 saying victims of terror attacks had a right to access justice and reparation.

But the Minister responsible for the government’s response to the terror attack Andrew Little told Stuff reparations came through the ACC system. “We’re not considering providing general compensation beyond what has already been provided,” he said.

What was the Royal Commission of Inquiry?

The Royal Commission of Inquiry into the terrorist attack on Christchurch masjidain on 15 March 2019 was released in December 2020.

The 18-month long inquiry examined the terrorist’s activity leading up to the mosque shootings and scrutinised whether state agencies did enough to prevent the attack.

The Inquiry concluded particular government agencies failed to protect Muslim communities, as well as failures in firearms licensing and security and intelligence agencies.

However it found no failures that would have allowed agencies to prevent the attack.  The inquiry states there was “no plausible way” that terrorist’s plans could have been detected by government agencies, “except by chance.”

The Government apologised to victims, families and the Muslim community for failiings, and promised implement all 44 recommendations.

What did the Human Rights Commission find when it analysed the Royal Inquiry?

One of the key findings is that because parts of the Inquiry were suppressed, it has been difficult for the communities to fully understand it.

When the Royal Commission concluded its work, it issued an order permanently suppressing information it had obtained during the Inquiry. This order included certain information regarding the terrorist, including interviews held with him.

The Royal Commission also ordered that evidence and submissions provided to it by public sector chief executives and ministers be suppressed for 30 years. The primary reason cited for this was national security, followed by confidentiality concerns.

“There was no consultation with affected whānau, survivors or witnesses prior to the suppression orders being issued. The orders therefore came as a surprise and, in particular, we understand the 30-year order has caused anger, confusion and distress,” the HRC report states.

“As victims of terrorism, the affected community has a right to seek and obtain information about the causes and conditions that led to the attacks, so that they may learn the truth… However, the suppression order over government information sends a mixed signal to the affected whānau and survivors. Given the lack of prior notice or consultation, it has had a potentially damaging effect on the community’s trust in the process.” 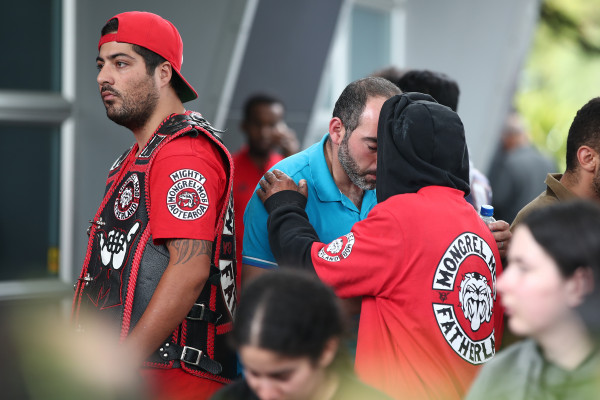 The Human Rights Commission also criticises the government for a lack of accountability over the attacks.

The Commission recognised the government apologised for failings, but says “the finding of no fault underplays the systemic biases that were identified in the report. It also gives the impression that there is insufficient government accountability. While the Government’s apology is important, on its own it does not adequately address its ongoing responsibilities to the affected whānau, survivors and witness and the wider Muslim community.”

The HRC also criticises the government’s ongoing commitment to supporting communities in need following the attack.

“Government support has felt like it has been dwindling or downgraded, rather than increasing. There is a lack of awareness among government agencies of the level of systemic prejudice that continues to exist,” reads the report.

The systemic prejudice it is referring to is the disproportionate scrutiny of Muslim communities by the country’s intelligence and security agencies before the 15 March terror attack, something that Prime Minister Jacinda Ardern admitted to during her apology for the attack.

Another gap identified by the HRC was around enabling affected families and survivors effective access to justice.

“Support is likely to be needed with the legal aid process, which is complex and bureaucratic and can come with costs. Also, many lawyers do not provide legal aid services. There is also the broader question of legal assistance in engaging with other types of processes, particularly those with a potential for reparation, such as the restorative justice process recommended by the Royal Commission,” the Report says.

Finally the Human Rights Commission found that there was a need for consideration of compensation or other forms of reparation for affected whānau, survivors and witnesses.

“The Royal Commission noted that it did not consider questions of compensation or other forms of reparation, as it considered that these did not fit easily within its terms of reference… This does not absolve the Government of their human rights duty to make reparations to the affected whānau, survivors and witnesses. On the contrary, it signals that reparations remain an open issue. The duty to make reparations exists irrespective of the Inquiry,” says the HRC in their report.

In Norway, following a white supremacist terror attack in 2011 which left 77 young people dead, the Norwegian Parliament set aside over 185 million kroner (over 45 million NZ dollars) in its annual state budget to cover compensation for the victims, with its justice committee determining a sum of 4.75 million kroner (around 1.2 million NZ dollars) as the upper limit for each individual.

“We suggest that the ACC scheme on its own does not necessarily fully satisfy the Government’s human rights duty to compensate given all the issues that arise. We also note that the Government has the discretion to make ex gratia payments in circumstances where a moral obligation to do so is recognised,” the report states.