Psilocybin – a naturally occurring psychedelic found in 'magic mushrooms' – can help treatment-resistant patients with depression, according to a study released on Tuesday by researchers from the United Kingdom.

Brain scanning trials conducted on 59 patients showed that taking psilocybin delivered quicker and more sustained antidepressant effects than escitalopram, a conventional antidepressant pill, as it freed up and increased connectivity between the brain’s networks.

This means that magic mushrooms and other psychedelics could provide an alternative to conventional antidepressants. But this doesn’t mean you should try this at home.

The researchers say these results come from a controlled environment and people with depression should not attempt to self-medicate.

A growing body of research shows the active ingredient in shrooms can help users move beyond the effects of trauma, as well as hard-wired habits of depression or addiction.

It’s an exciting time of year for shroom enthusiasts - something to make up for the end of the golden weather. Up and down the country pickers check their spots, combing the countryside for a free bounty of nature’s own hallucinogens.

To most people this is dodgy stuff. Magic mushrooms, after all, are Class A controlled substances – in the same category as P, heroin and cocaine – able to net you a life sentence in prison if you’re caught manufacturing and selling them.

Yet to a growing number of Kiwis mushrooms are seen as life-saving medicine, and even a cure for drug addiction. So how can perceptions around these little fungi differ so wildly – and why are they attracting such interest?

The buzz about magic mushrooms

For the mainstream media it all started with research by John Hopkins University. In mid-2020 the highly prestigious U.S. university published results from an experiment on 24 people with major depressive disorder. Patients were given two doses of the active ingredient in shrooms, known as psilocybin.

Each time they lay in a comfortable room with music and a ‘sitter’ to provide support and assurance, if needed, for the five hours that the drug took to run its course. Later their levels of depression were assessed.

In the science-speak of the study’s authors, this psilocybin therapy “was efficacious in producing large, rapid, and sustained antidepressant effects in patients with major depressive disorder”.

In follow-up reporting the University said that, a month after the treatment, more than half of the patients “no longer qualified as being depressed.”

The world sat up and paid attention. It was a tiny study, but it pointed to exciting possibilities. Depression affects a lot of people – and not all are helped by the usual Prozac-style meds. Might these humble fungi have something more to offer than teenage thrills?

For the shroom-taking community, this was old news - official confirmation of what they’d known, or at least felt, for years: that magic mushrooms are good for you.

The problem with shrooms is the way they’re taken.

That’s what people in the community say at least. Basically, at a certain age a certain kind of teen decides to get a little crazy. Someone sources a bag full of magic mushrooms. Someone else brings the liquor, and a massive dose of powerful hallucinogens is consumed by all.

Some have a great time. Some talk to God. Some have a hideous anxiety attack in the middle of it all and swear off them for life. Wise old shroomers shake their heads.

It’s the equivalent of introducing yourself to fine whiskey by glugging an entire bottle, they say – so it’s no wonder it doesn’t work out well.

In reality magic mushrooms can be taken in a wide range of doses, from large (full hallucinations, loss of sense of self, challenging ideas and experiences) to the sub-psychedelic (fresh thinking, pleasant sensations, some perceptual twists). Most interestingly there is also a community of users who like to micro-dose. 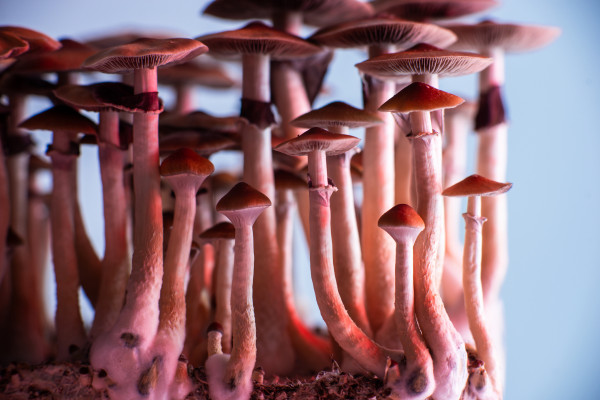 Microdosing is the practice of taking tiny amounts of a psychedelic substance, often magic mushrooms, for mental health or simply general wellbeing.

Generally the quantity used is about 1/10th of a recreational dose, so that there are barely noticeable effects; certainly nothing psychedelic. Micro-dosers follow different dosing patterns – for example 0.1g of dried mushroom, followed by two days off before the next micro-dose, repeating for several weeks.

Some describe the effect as like the feeling you get when travelling. There’s a sense of being more open to the freshness of experience, with clearer thoughts and new feelings. Researchers now believe this is an experience of ‘neuroplasticity’: the human brain adapting and creating new connections.

Basically, psilocybin - the active ingredient in magic mushrooms - appears to make the human mind, temporarily at least (but possibly longer term as well) more flexible. It’s a ‘mental massage’ that a growing body of research shows can help users move beyond the effects of trauma, as well as hard-wired habits of depression or addiction.

Whether that’s best achieved through microdosing, or with larger doses in the company of a trained professional, is now a topic of much research – and a lot of funding.

Internationally there are two large companies listed on stock exchanges pushing ahead with further clinical trials and studies of their own. New York-based MindMed boasts a whole division dedicated to microdosing research, while the UK’s CompassPathways has developed a training programme for psilocybin-based counselling.

Back in New Zealand these are issues the amateur mushroom community is forced to navigate by itself. Dozens of internet sites have sprung up to help those with an interest in magic mushrooms make safe decisions, especially around correctly identifying shrooms.

It’s an uncomfortable space, legally speaking. Site users would be easily trackable by authorities. Yet for those involved the stakes are worth it.

“Mushrooms are rarely taken to just get out of it,” one of these site admins told Re:. “Many people find those feelings overwhelming and choose to microdose instead. It’s important to create a safe space for people to I.D. their mushrooms.”

That’s because picking your own magic mushrooms comes with a genuine risk of death.

One of the most commonly sought fungi, psilocybe subaeruginosa, is almost identical in appearance to one of the most poisonous mushrooms in New Zealand, galerina marginata. Deadly Galerina, as it’s known, contains more toxins by weight than dreaded species like the well-known ‘death cap’ mushroom, and they can easily be scooped up by accident by incautious pickers.

Instead they insist on using latin names, to ensure correct and safe identification, and will ban anyone offering (or requesting) to trade or sell spare shrooms.

“The aim now is to practice harm reduction within the community,” the site admin told us. “Magic mushrooms grow in all parts of Aotearoa and they are not addictive in the slightest.”

Instead they believe mushrooms can help people with addictions to move beyond them by invoking a sense of responsibility for one’s self and the environment.

“Psilocybin containing mushrooms have been in human history as far back as we can recall. Humans will always look for and consume magic mushrooms.

“It’s practically in our DNA.”

One of these teens with cystic fibrosis has access to a life-saving drug. The other doesn't