There are currently 56,146 active cases in the community.

Todays seven-day rolling average of community case numbers is 8,024 – last Wednesday, it was 7,533.

32 people with Covid-19 have died, bringing the publicly reported total to date to 1,017.

Of the people whose deaths we are reporting today, two people were from Northland, nine from the Auckland region, two from Bay of Plenty, two from Taranaki, one from Tairāwhiti, four from MidCentral, two from Hawke’s Bay, three from the Wellington region, one from Nelson-Marlborough, four from Canterbury and two from Southern.

Ten were women and 22 were men

The 7-day rolling average of reported deaths is 17.

How deaths are assessed

This means that most of the deaths that have now been publicly announced have been assessed as either having Covid-19 as the underlying cause, contributing to the death, or unrelated to the death.

As of this morning:

There are 425 people in hospitals, with nine of those people in intensive care or high dependency units.

The average age of people currently in hospital is 60. 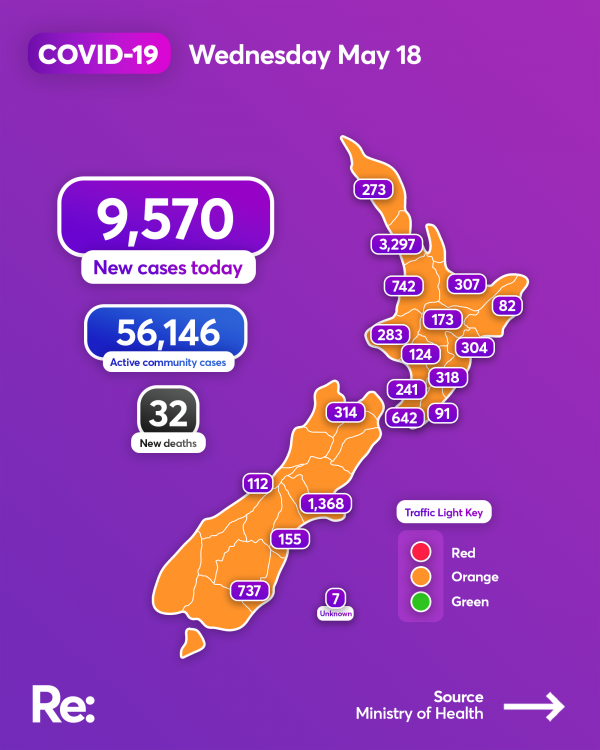 70.7% of eligible people have had their booster shot.

How Māori celebrants are indigenising weddings

“For some people it’s just wanting to pay homage or incorporate their culture.”

Like Misha, I rejected my Indian culture growing up | 2000s Baby

“The South Asian experience has been a complicated one for many of us growing up in New Zealand”.

Four ways NZ will meet its emission targets by 2050

The Government has released its $2.9 billion plan to get Aotearoa to zero carbon emissions by 2050.