If you're looking for just the key, verified facts, check in here for rolling live updates.

Today there are 89 new cases, and no additional deaths.

15 people are in hospital, with three of them in intensive care, two of those in a critical condition.

There are 12 significant clusters (groups of more than 10 cases considered to be from the same source). The largest of those come from a wedding in Bluff (58 cases), an event at a Matamata bar (56 cases), and at Marist College in Auckland (66 cases).

The Prime Minister says the number of new cases each day has remained “relatively steady” (between 60 to 90 new cases per day for the last week). “We haven't seen the exponential growth that other [countries] have, the kind that leads to an overwhelmed health system.”

Health modelling showed we had the potential to have as many as 4000 cases this weekend if preventative measures weren’t taken. The Prime Minister said being at just over 1000 cases “shows the difference that cumulative action can make…. 3000 fewer people sick, 3000 fewer passing the virus onto others and others.”

The Prime Minister says despite the huge economic impact of lockdown, it is the best move for both the health and finance of the country. She says a strategy that sacrifices people to attempt to help the economy would have both “loss of life and prolonged economic pain.”

“Those who have lost jobs, businesses making difficult decisions, I know there is real and genuine struggle in New Zealand right now, and I don't carry that lightly.”

Historically, the Prime Minister says, countries who acted early to save lives were the least affected economically in pandemics. “Those who worked to stem the spread did better economically.”

The Prime Minister says most New Zealanders are doing a great job of staying home, but “there are some who I would charitably describe as idiots”, including a Christchurch man who filmed himself coughing at people in a supermarket. The man has been charged with endangering life and will appear in court tomorrow.

Finally, the Prime Minister has reminded New Zealanders that with the change of daylight saving, and with so many of us staying at home, now is a great time to check your smoke alarms. 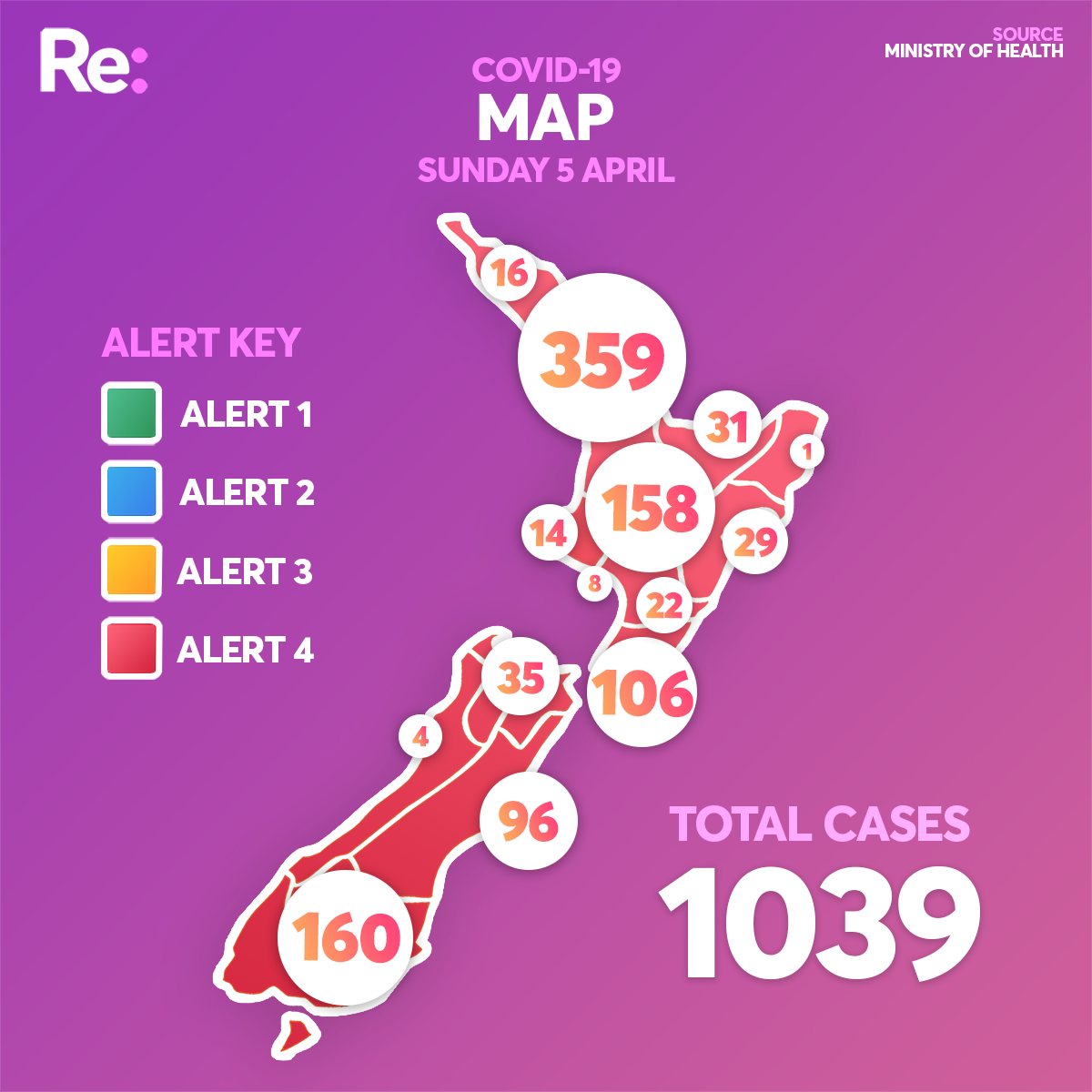 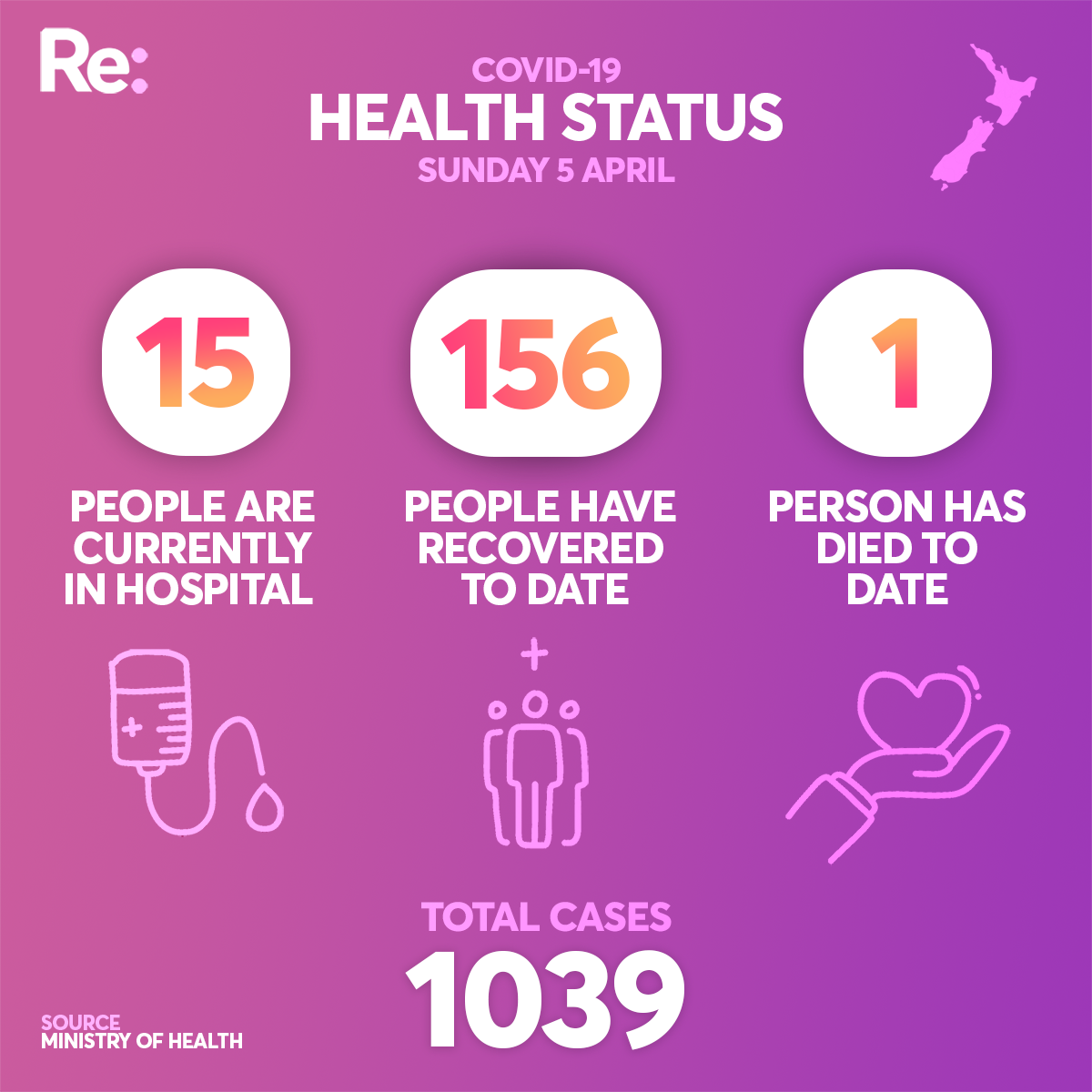 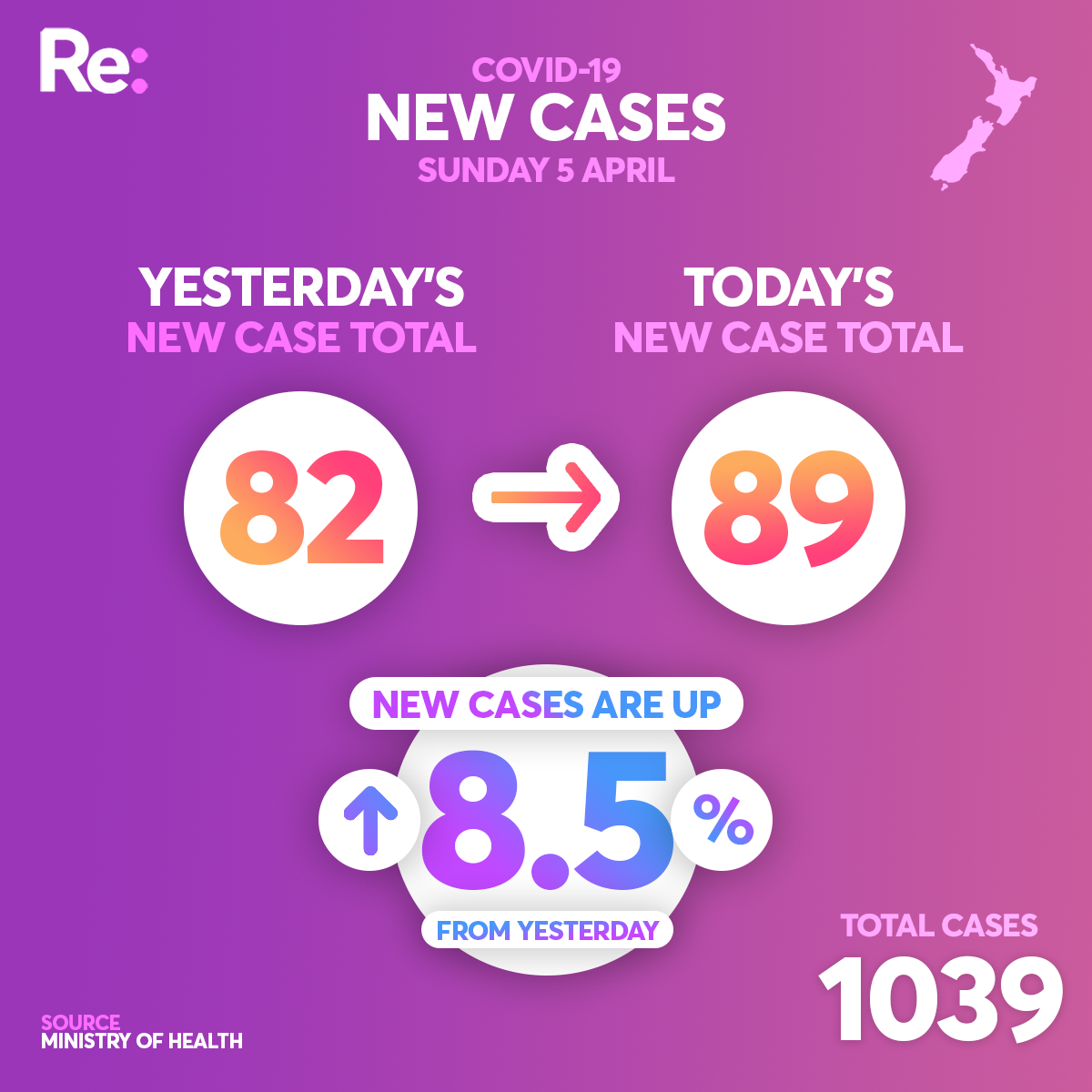 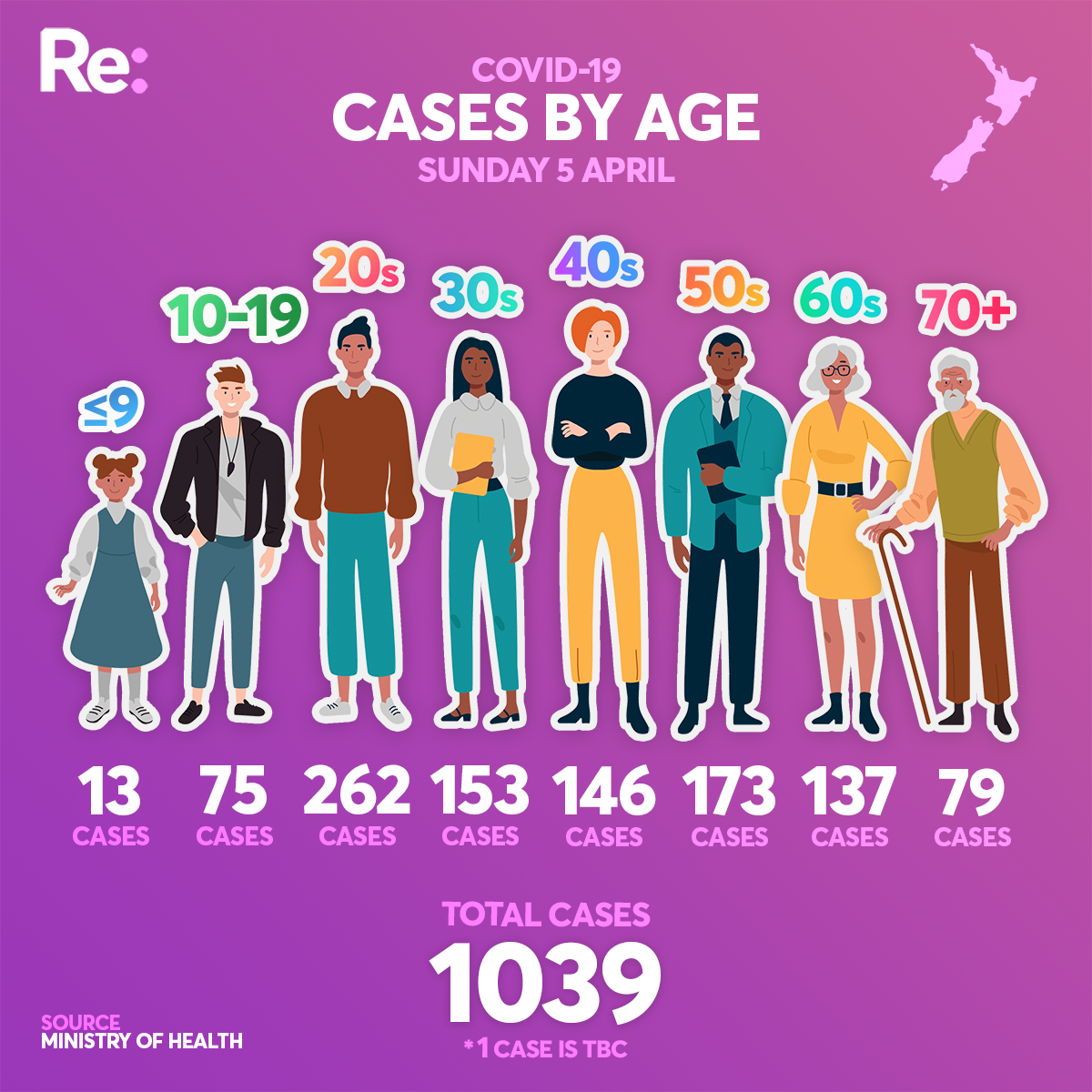 New Zealand has 82 new cases of Covid-19. We have got through another day without any more deaths.

127 people who have had the virus are now recovered.

The number of people in hospital has decreased from 13 to 10. One of those remains in intensive care in Wellington Hospital. All patients are in a stable condition.

There were 3631 tests done yesterday, the highest number of tests carried out in one day so far. New Zealand has conducted 33,116 tests in total and capacity has increased to over 6000 tests per day.

The number of cases globally has reached one million. 60,000 people have died worldwide.

Director of Public Health Dr Caroline McElnay said Healthline’s 24/7 helpline has increased capacity and wait times are now about five minutes. 14,700 calls were made to the service yesterday and Dr McElnay encouraged people to call in with Covid-19 or any other health related queries. 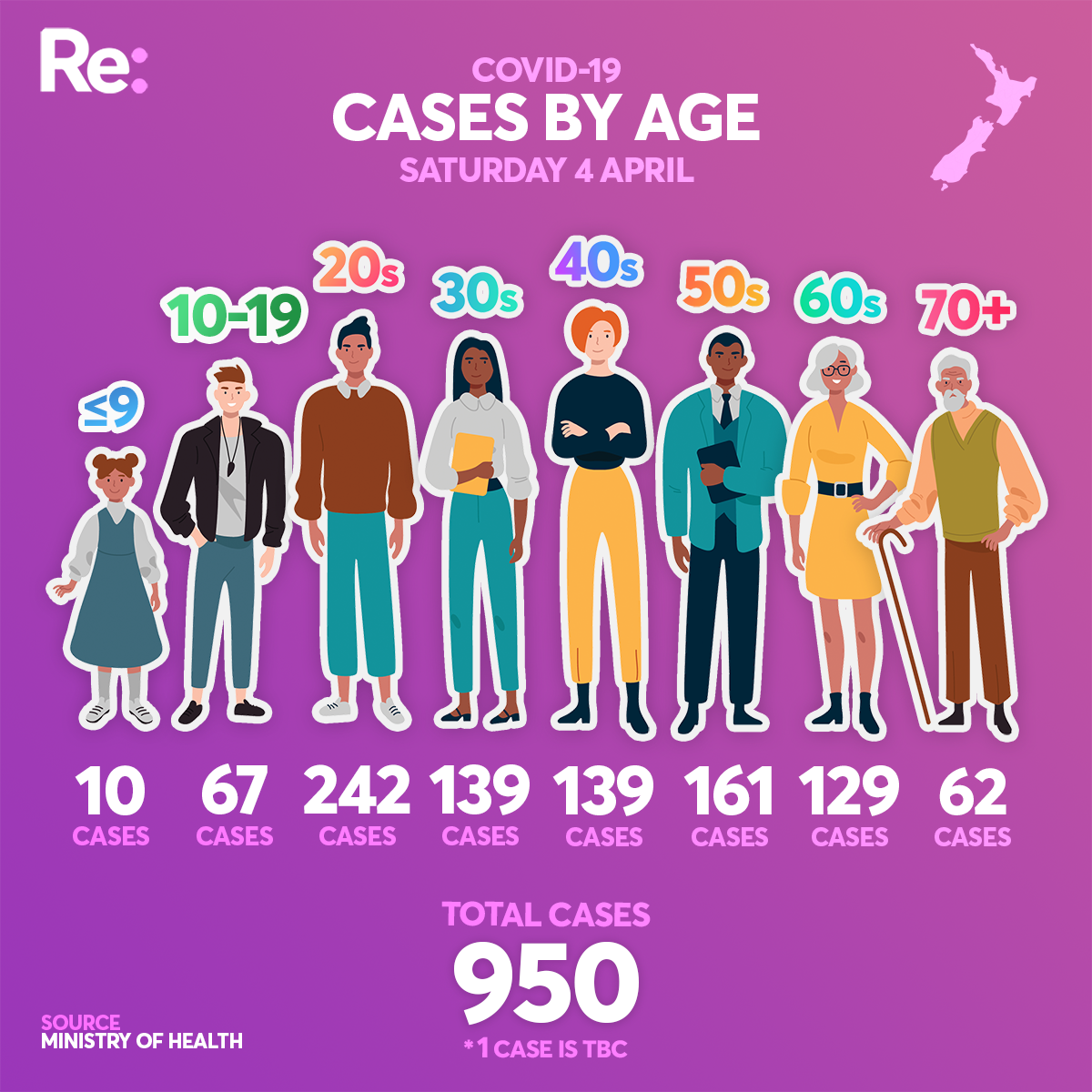 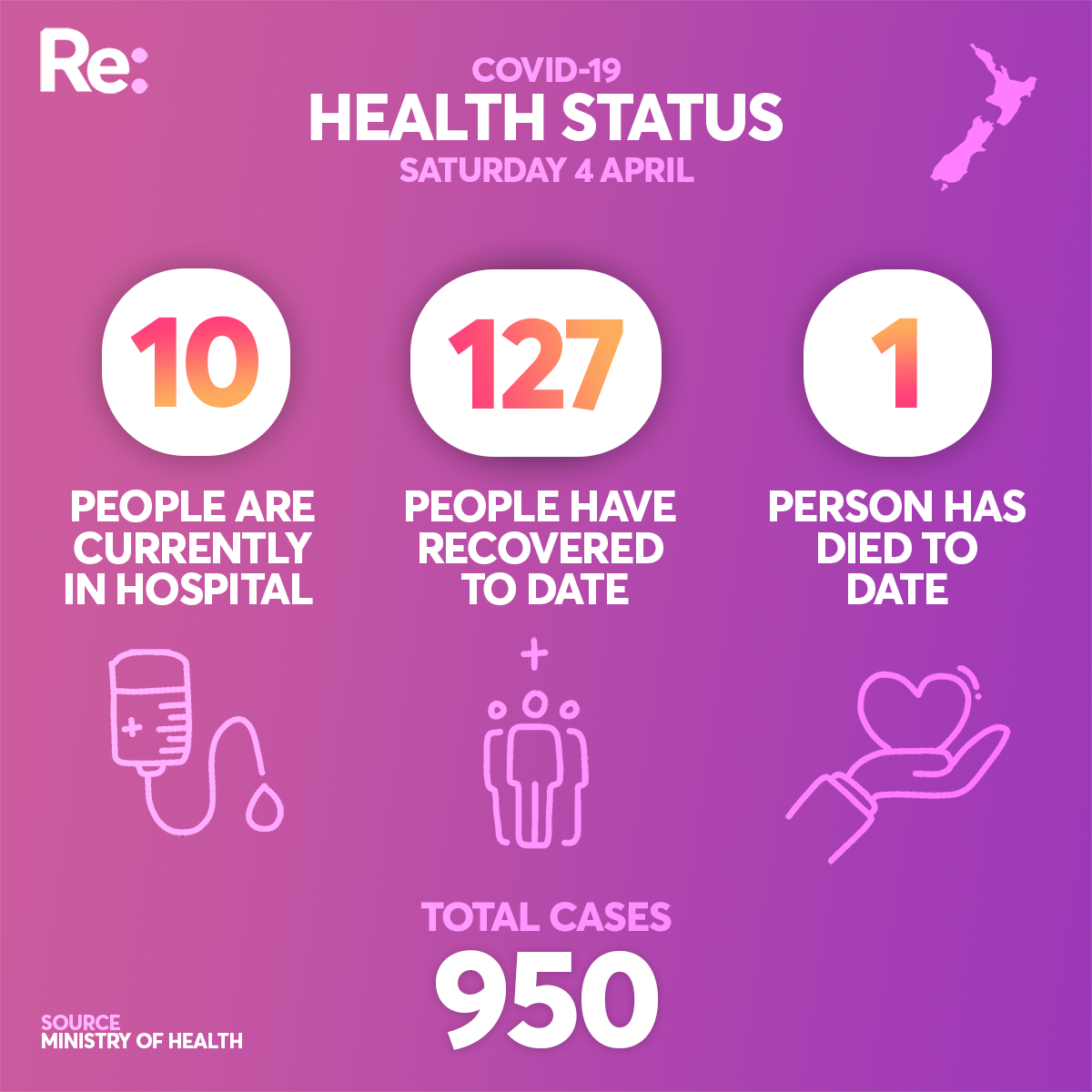 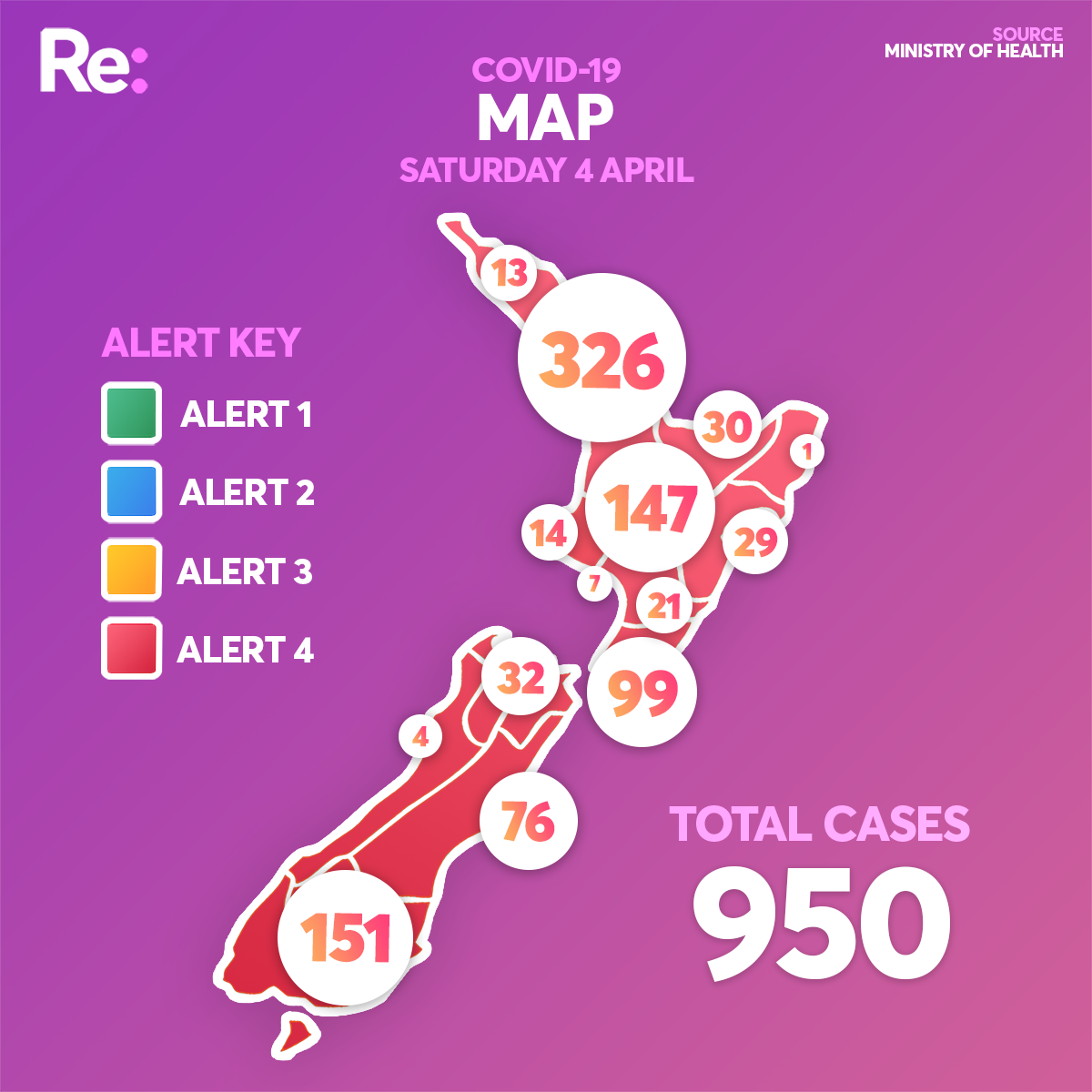 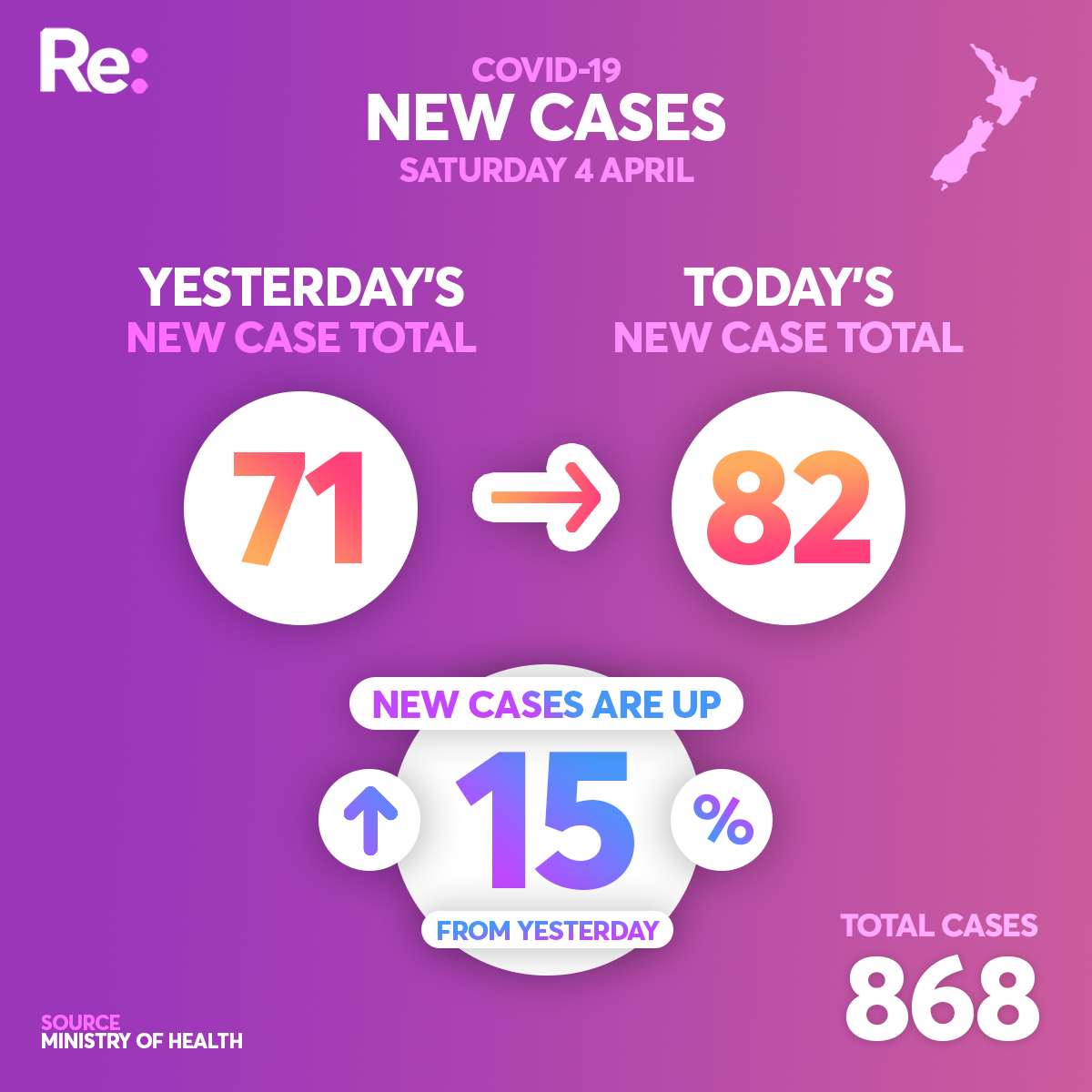 New laws have been introduced to help businesses facing insolvency due to Covid-19. Insolvency is when a business isn’t able to pay back debt, or when their total debt is more than the value of their assets.

Finance Minister Grant Robertson announced the changes to the Companies Act. Businesses affected by Covid-19 will be able to:

“It is inevitable that some businesses are going to go into liquidation, but these measures provide an accessible and pragmatic means of helping some businesses to weather the storm, in a way that does as little harm as possible to their creditors’ interests,” the Finance Minister said.

“Hold onto your people, give them the wage subsidy, don't make rash decisions during this time, and have a plan for coming out the other side.”

Today there are 71 new cases, and no additional deaths.

That brings our total to 868 cases.

13 people are in hospital, with 1 of those in a stable condition in intensive care.

There was an all-time high of 3446 tests done yesterday, and there’s the capacity to do over 5000 tests a day.

The current criteria for being a recovered case is:

There are currently 135 New Zealanders who have recently arrived from overseas in quarantine.

Essential workers will be entitled to paid leave in a new scheme announced by the Prime Minister. Workers in essential industries who need to take leave due to being in a risk group, needing sick leave or having vulnerable family members at home, will now be able to be paid at the same rate as the wage subsidy scheme - $585 a week for full time workers, and $350 a week for part-time workers.

There have been 13,000 new applications for the wage subsidy scheme since yesterday.

A new government Whatsapp channel has been created to give New Zealanders daily updates. It was created instead of a specialised Covid-19 app, the Prime Minister says, because many New Zealanders already have the Whatsapp app installed on their phones.

Here are today's numbers in infographics: 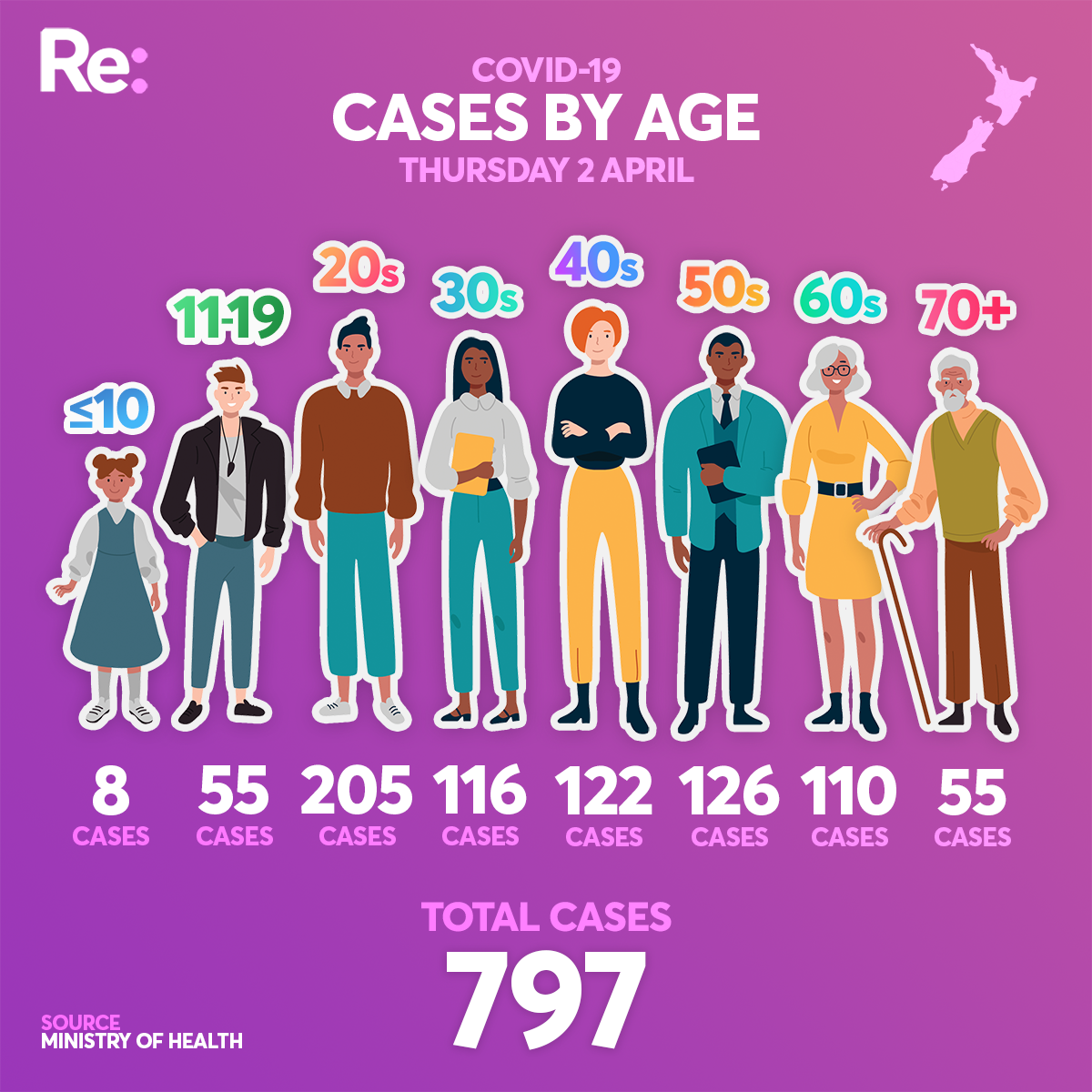 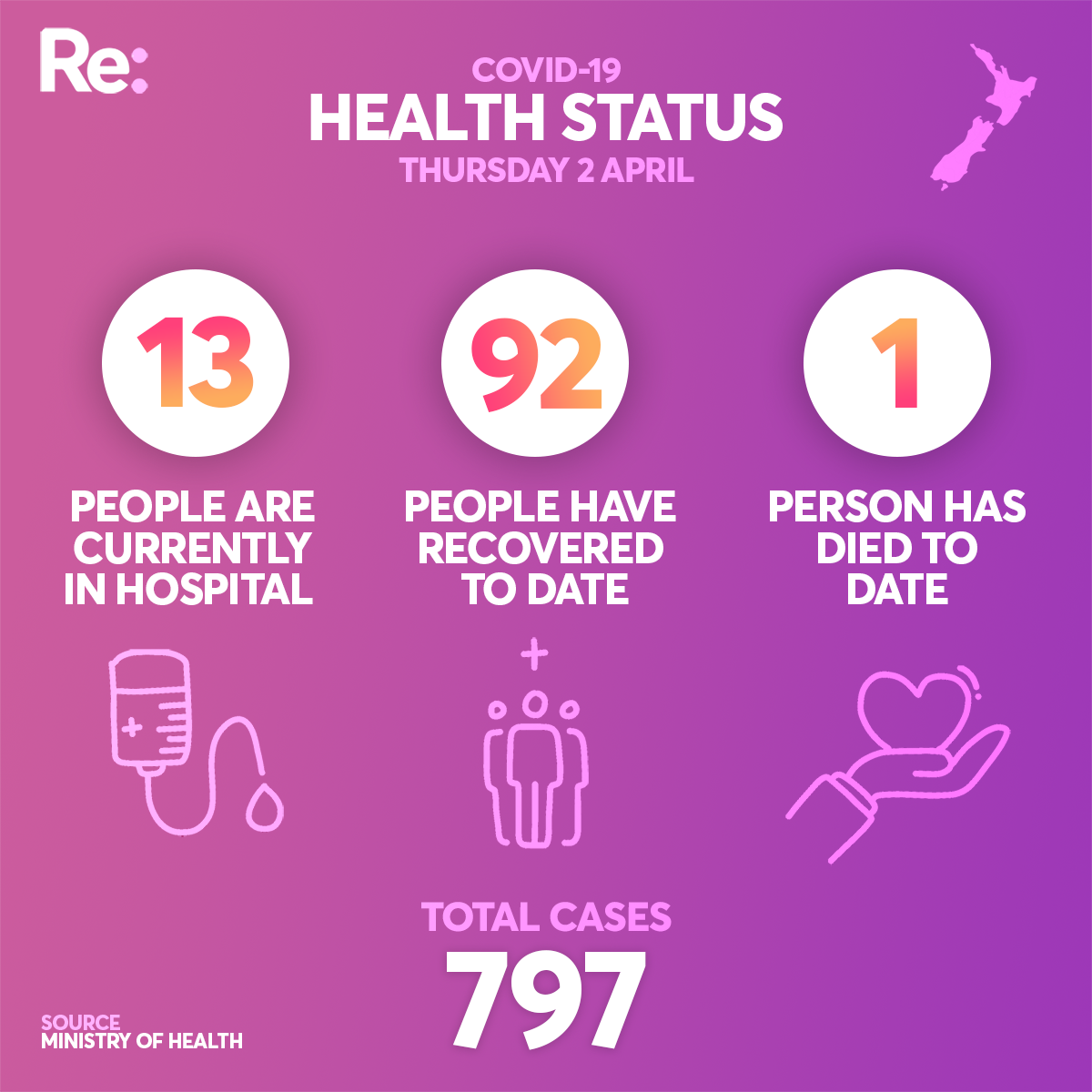 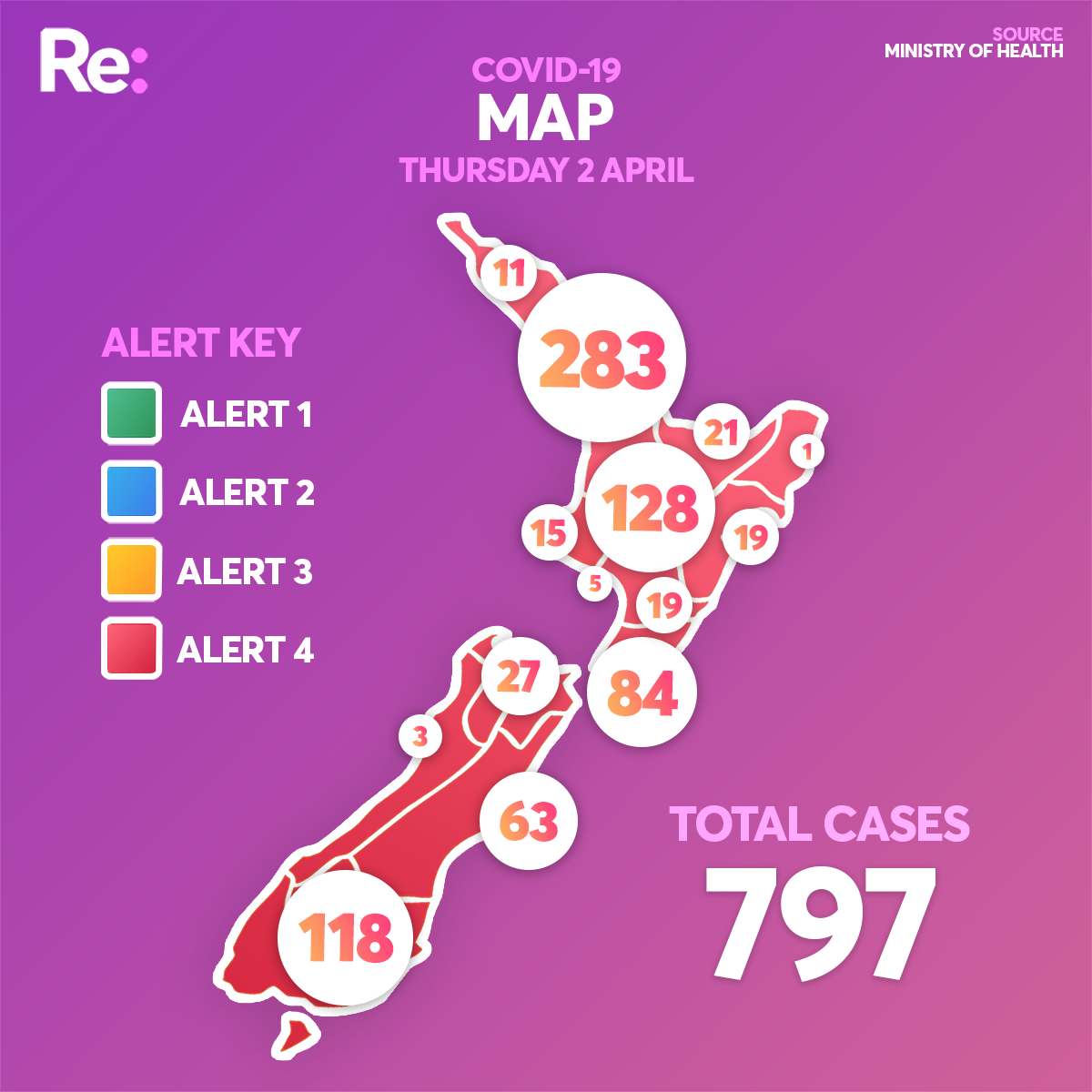 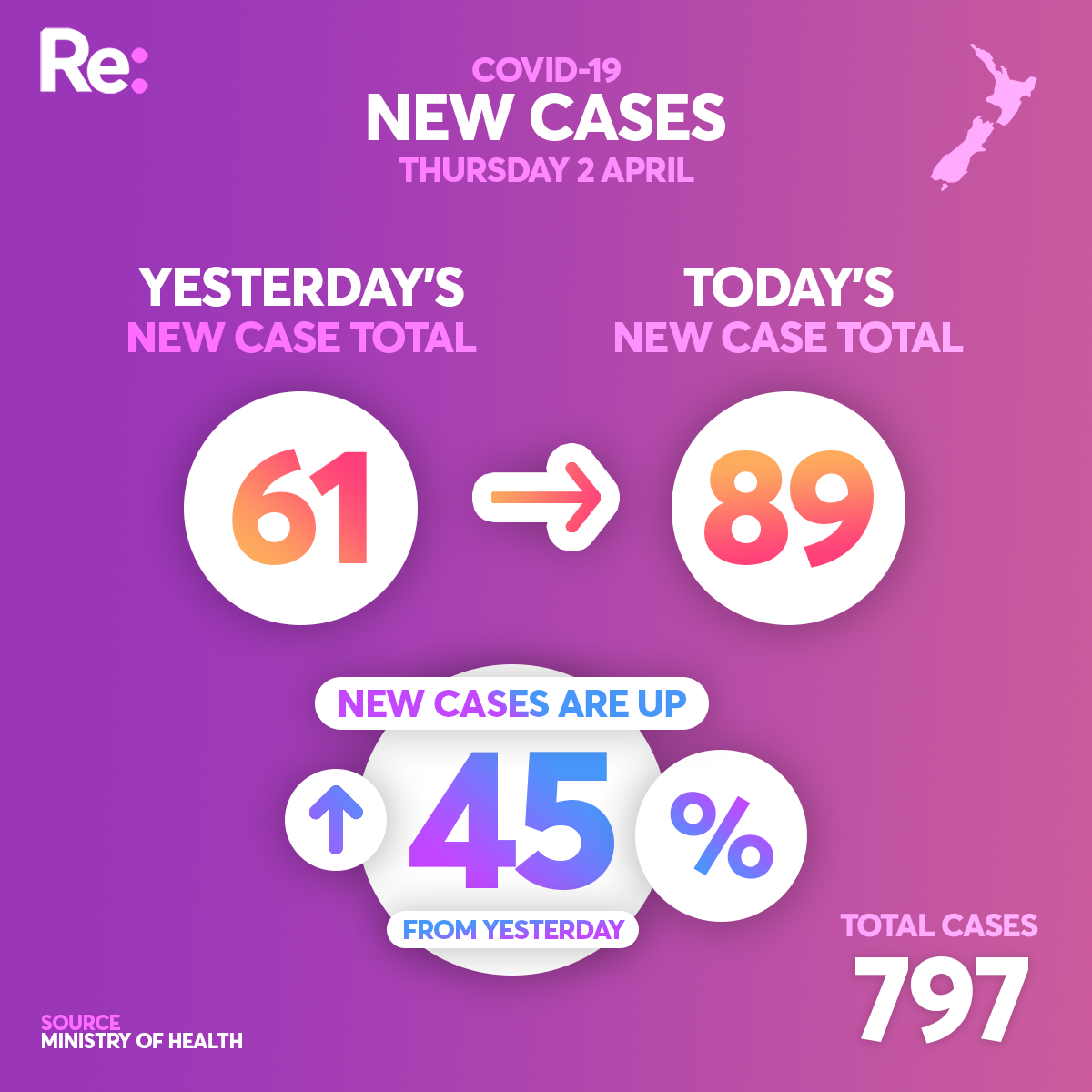 Today there are 89 new cases, and no additional deaths.

That brings our total to 797 cases.

13 people are in hospital, with 2 of those in stable conditions in intensive care.

41 million additional face masks have been ordered from overseas that will arrive from next week. 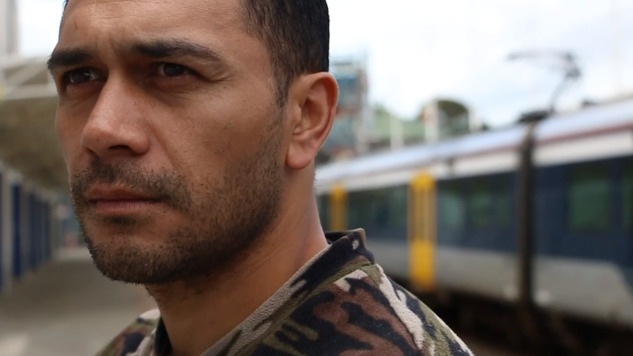