Performance artist Moe Laga and comedian James Nokise are two Pasifika artists who share similar cultural backgrounds but make work that is on absolutely opposite scales of the performance art world. In the seventh episode of Disruptors - produced by our friends at The Basement theatre - Moe and James discuss treading the fine line between art and activism.

“When we started off as FAFSWAG there was really no lane for us as a group of queers from South Auckland to take us seriously, and take our art seriously. There were a lot of gatekeepers who weren’t going to put us on so we had to go out there and do it ourselves,” says Moe Laga, whose practice includes movement, activation and motherhood towards her arts collective and vogueing house Coven. “I feel like I keep continuing that and and that’s what I’m trying to teach the next generation of queer, indigo, rainbow children.”

“I think a lot of young Pacific Island artists, because they grew up in New Zealand, they don’t understand that no matter their gender, their ethnicity, their existence is political, because we were colonised,” says comedian, writer and podcast-host, James Nokise. “To grow up and make art of any kind, there can not be a separation of art and activism because their existence itself is activism, so whatever art they make is activism. Period.”

Disruptors is a podcast series where creatives in Aotearoa talk about how they disrupt with their art, produced by Basement Theatre.

Listen to all the episodes here. 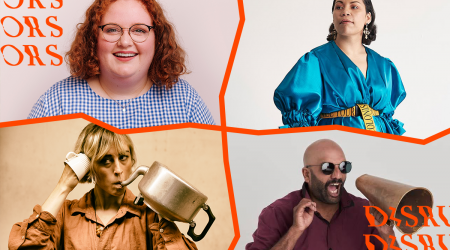