Despite popular belief, experts say it isn’t because young people are rebelling against lockdown more than others. There’s actually a pretty simple explanation.

Sophie’s phone lit up with an unknown number. She had been mentally preparing herself for this phone call for three days, but when the calm voice on the line told her she tested positive for Covid-19, she couldn’t help but feel disbelief.

“It felt surreal and it completely changed my perspective on this pandemic. Just a week beforehand I was pretty casual about it and thought it wouldn’t affect me.”

Healthy Kiwis in their 20s like Sophie know the chances of Covid-19 being fatal for them are low. Some people’s immune systems will be so effective they won’t even notice they have the virus, or that they have passed it on. But for some reason this resilient bunch has the most detected cases of Covid-19 cases in New Zealand. We wanted to know why this is and what this means for the containment of the virus.

Sophie was diagnosed before the lockdown started. Despite following safety regulations, because her symptoms didn’t show for five days she unknowingly spread it to co-workers and her flatmates.

Unlike most people who contract the virus, Sophie didn’t have a sore throat, dry cough or fever at any point. “It started with fatigue, not just feeling tired but inability to focus on anything. I had no appetite and felt nauseous. I then developed a tightness in my chest and felt out of breath just walking up the stairs.”

Her other symptoms were much more mild, like losing her sense of smell and taste, which she only realised after trying to eat Marmite on toast. “If I hadn’t been notified that I was in close contact with a positive case, I wouldn’t have even considered Covid-19,” she says. 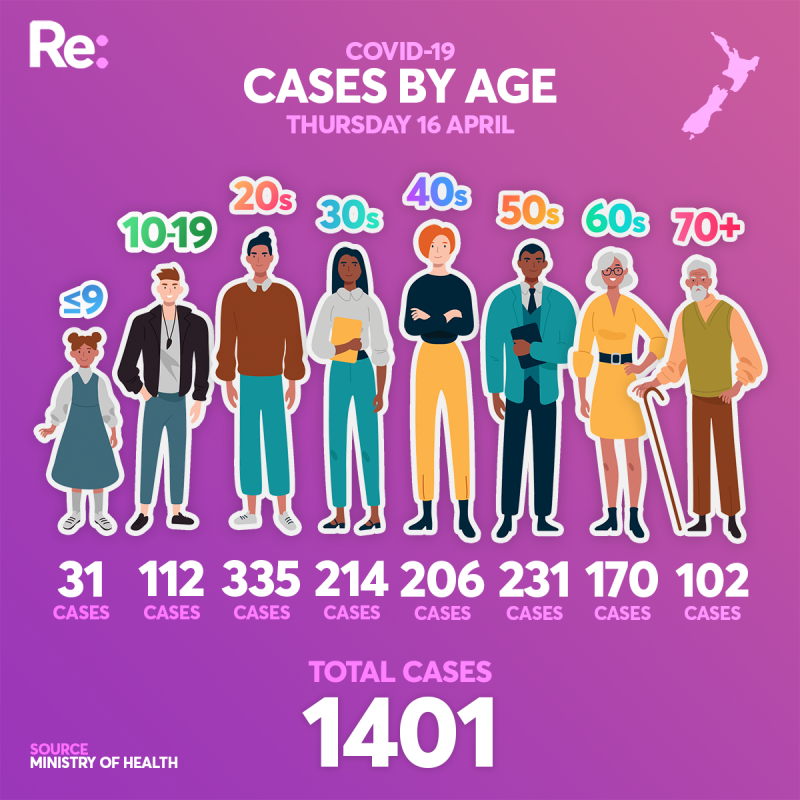 You may have noticed that 20-29 year olds have significantly more cases of Covid-19 than any other age group in New Zealand. Despite critics using this as “proof” young people are not taking the pandemic seriously, experts say these numbers don’t reflect this at all.

Professor Michael Baker, Otago University’s director of health environment infection research, says these numbers do not indicate young people are more at risk of catching Covid-19, they just have a higher chance of being tested. A key reason for this is the significant number of young people coming home from overseas, generally more than any other age group.

“There's no point in reading very much into the distribution of those cases. The only thing you can say is people under 10 and people over 70 are affected. So this basically means anyone can get this infection. But beyond that, the numbers don't really mean anything.”

If you look deeper into the data, we can clearly see substantially more young people contracted the virus overseas. The spread for non-travel related cases in young people is similar to other age groups. This trend challenges the narrative that young people are disobeying lockdown regulations any more than people in their 30s, 40s and 50s. 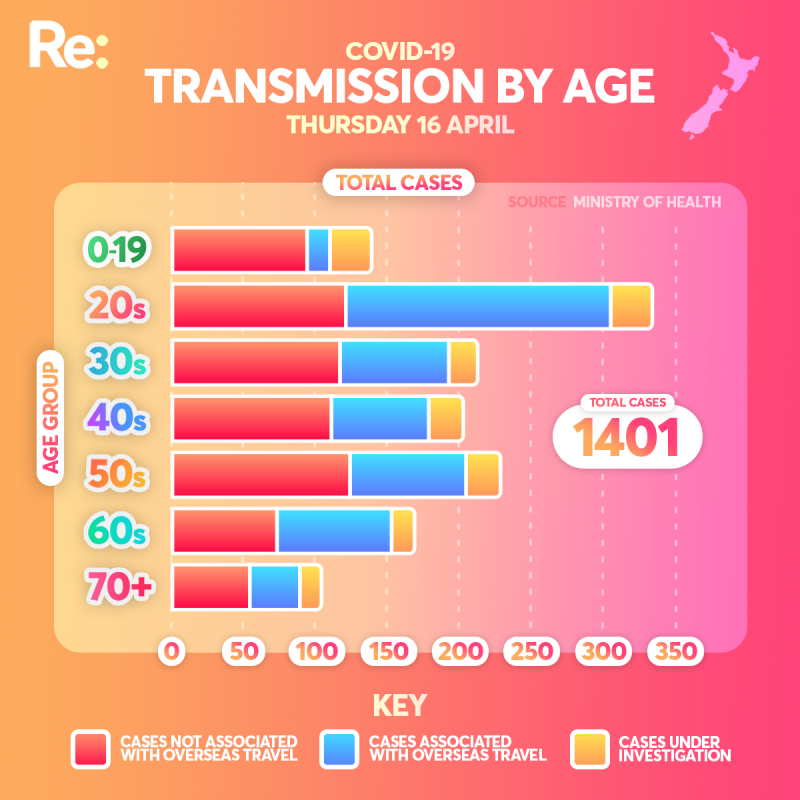 This means we don’t know for sure if young people are getting tested at a higher rate than other age groups.

Over 64,000 tests have been done so far. If, for example, 20,000 of those tests were on 20-29 year olds and only 5,000 or 10,000 tests were done for each other age group, it is no surprise that one quarter of all cases are people in their 20s. Michael says this information, which he terms the ‘denominator’, is crucial to make sense of which age group is more at risk. Without it, we can’t say much.

The case numbers that are released each day at 1pm reflect infections that began one or two weeks ago. This “lag” is because the virus has an incubation period which means someone can go days without showing symptoms, sometimes up to two weeks.

Clinical psychologist Dr Sarb Johal says the overrepresentation of people in their 20s is likely because this group was “out and about” more in the weeks leading up to the level four lockdown. For example, students who were traveling around the country to get home from university accommodation or from overseas.

Although there are people breaching rules, he says it is “unfair” to put more blame on this age group for the spread of the virus because higher numbers do not always reflect rebellious behaviour during lockdown.

“It may be true that there is some behavior like that going on, but I don't see them as the group that are drinking a glass of wine at the end of their driveway and risking breaking bubbles,” he says. “I think that there is a danger of having a lasting stigma and discrimination attached to that group, because of beliefs that are founded in this period of time.”

Sophie has experienced this stigma first hand and because of it, would only speak to Re: anonymously. Despite her efforts to social distance and thoroughly wash her hands in the lead up to lockdown, she says that hasn’t stopped people on the internet being cruel about her situation. Sophie isn’t her real name, and she doesn’t even feel comfortable sharing the city she is living in or how she contracted the virus, in fears it will draw attention to herself or reveal her identity.

Why is it especially important for young people to stick to their bubbles?

Three weeks into lockdown, it is understandable that young people are getting fed with being stuck at home. Sarb says we can see from past crises that young people in particular struggle to withdraw from the world to save the world. “They're being asked to give up their newfound freedom at a time when they have just started to experience it. And it's really hard for them to do that.”

This would explain the thousands of young American’s flocking to Miami for spring break or Kiwis throwing a huge St Patricks party.

“I think young people are seeing it as more of an inconvenience because plans and travel are getting cancelled,” says Sophie. “But I think it’s good to show youth that you have to adjust to not having everything at your fingertips all the time.”

Sophie wants to warn young people about how subtle this virus can be. “I think young people are more likely to break their bubble because they are in denial that they could be carrying it without knowing, or that they trust their friends' word that they don’t have it either. But I had it for five days without symptoms.”

Although it might be tempting to visit a friend or loved one because you feel completely fine, Michael says our unwavering commitment to lockdown is even more crucial than other age groups. Why? There are two key reasons young people in particular can be “major virus spreaders”.

The first is our resilient immune systems. They might be so good at fighting off the virus we don’t even realise we have it, making us silent carriers. “Young people are going to have fewer symptoms, so they're going to be less inclined to be lying at home, feeling ill like older people, they may be more inclined to be wandering around and infecting others,” says Michael.

The second is how sociable we are. “This age group has huge circles of friends. Whereas older people often for various reasons are more anchored down with a smaller bubble. This means the number of people young people infect is on average much higher.” This is something to keep in mind even after we come out of lockdown. The smaller we keep our bubbles, the slower the virus will spread.

New Zealand is the only western country that has a chance at eradicating this virus, says Michael. But this can’t happen if we start to slip now. “We are the lucky ones. So just hold on to that thought and lay low for the next week or so. Think about how this will be one of the most remarkable memories of all of our lifetimes.” 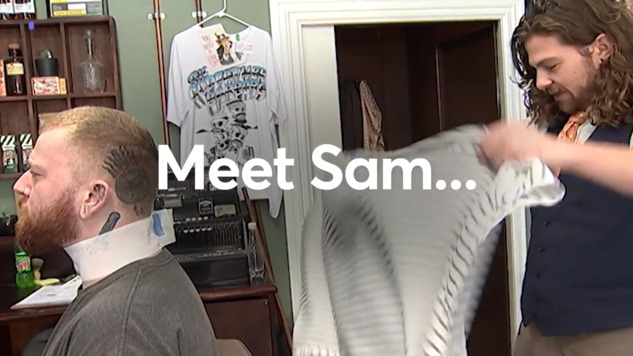