When news broke that the coronavirus likely originated from a Wuhan wet market (a street market selling fresh produce), Chinese people were immediately demonised in the media for their eating habits.

The narrative plays into the classic stereotype that Chinese people are ‘dirty’ eaters who eat dogs, cats and other ‘strange’ food. Mainstream publications have been fueling the spread of racial stereotypes by publishing “gruesome” and “revolting” videos of Chinese people eating different foods, like bats and live mice. One Facebook user commented, “Chinese people need to stop eating everything that moves.” 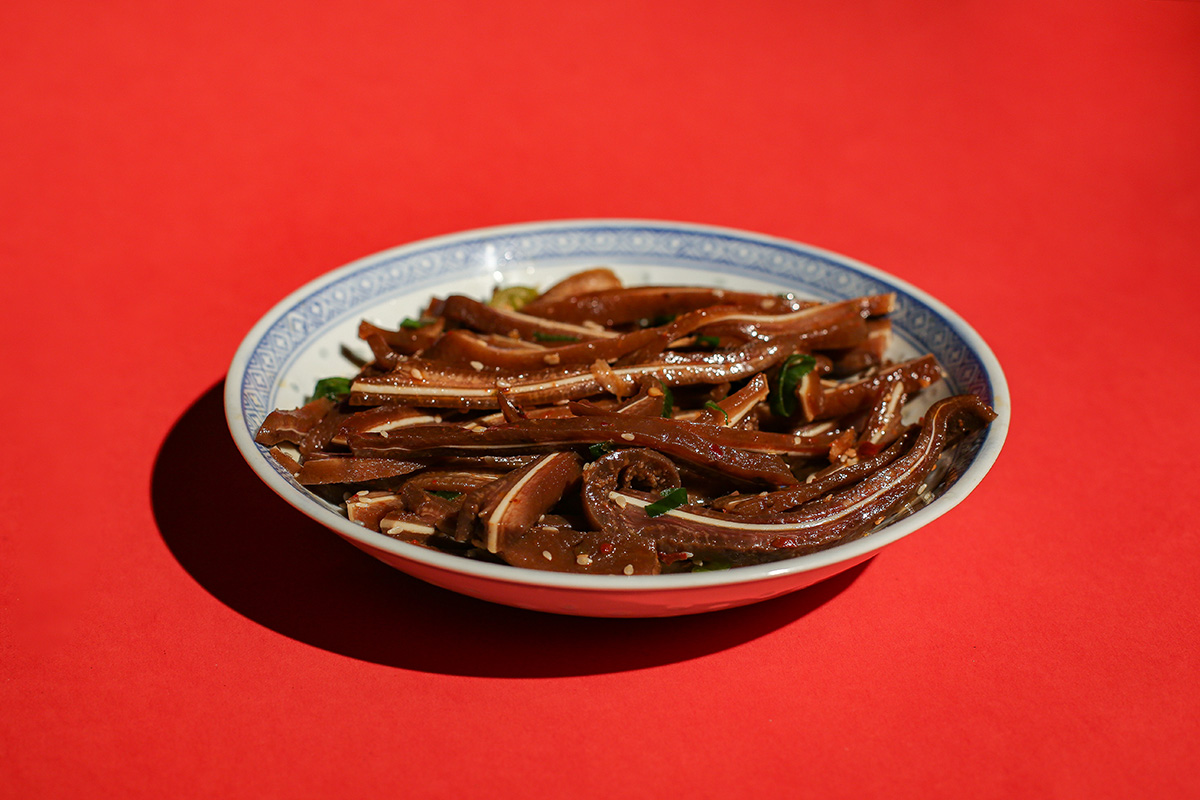 In Chinese cuisine, almost nothing of an animal goes to waste. People might grimace at the idea of eating chicken feet, duck tongue, beef tendon, jellyfish, preserved egg and more. These kinds of food might seem gross from a western perspective, but they’re normal (and delicious) for other people. Just like how some common western foods like jelly, black pudding or pâté would seem gross if they weren’t familiar.

For Wai Ching, an artist who moved to New Zealand from Hong Kong seven years ago, her childhood memories centre around one of her favourite foods; chicken’s feet. “I used to have a little competition between myself and my parents,” she reminisces about yum cha, “I would look over at them and their chicken feet bones and see how clean they would eat them, so I would try to eat my bones clean too.” 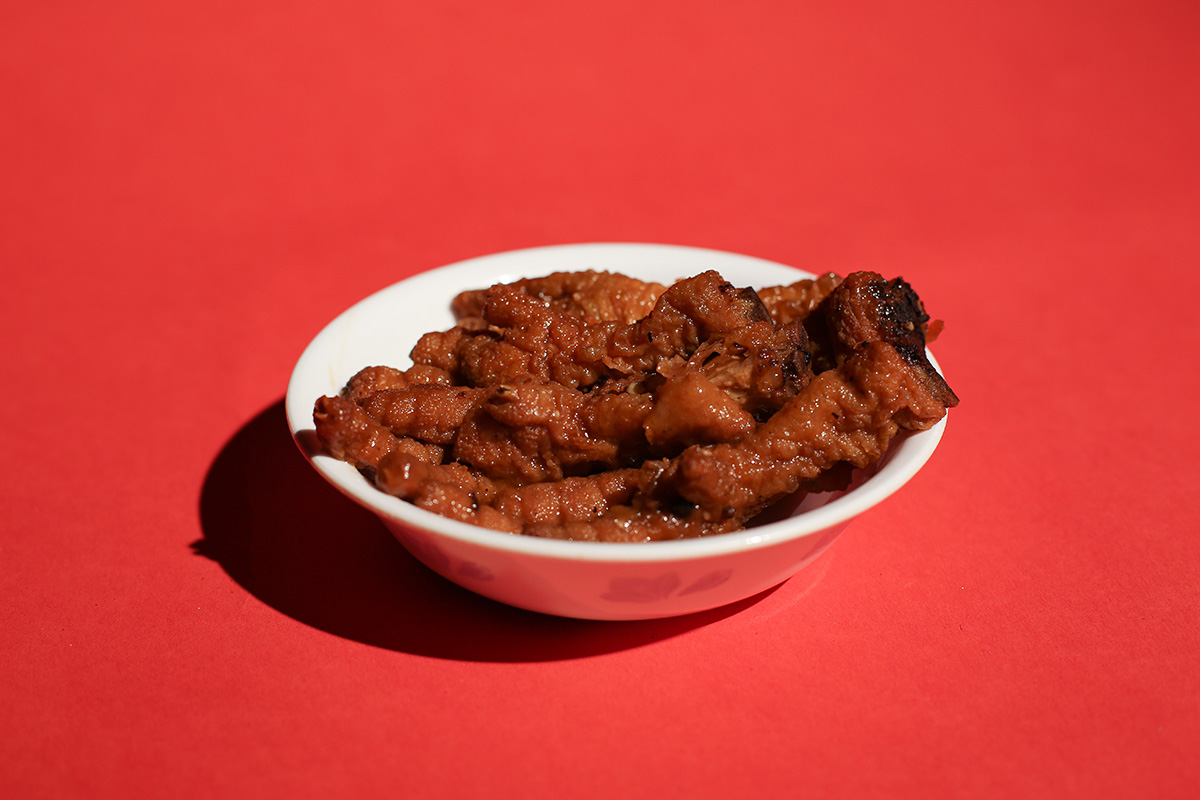 Chicken feet have no meat and are mainly skin and tendons, which make them quite gelatinous. They’re also a good source of collagen, which is said to help with youthful and firm skin. They feature in different cuisines from all over the world, including Eastern Europe, South Africa, Mexico and Jamaica. The chicken feet dish at yum cha is braised in a sweet soy and oyster sauce. The skin falls off the bone with ease.

“I miss the feeling of putting a whole chicken’s foot in your mouth and next minute it comes out and it’s just bones, and no one will judge you for spitting your bones out,” says Wai Ching. She is aware it’s not a common meat to consume in New Zealand, and feels self-consciousness about people judging her. “When I’m here, I’m hypersensitive about how I eat my food.” 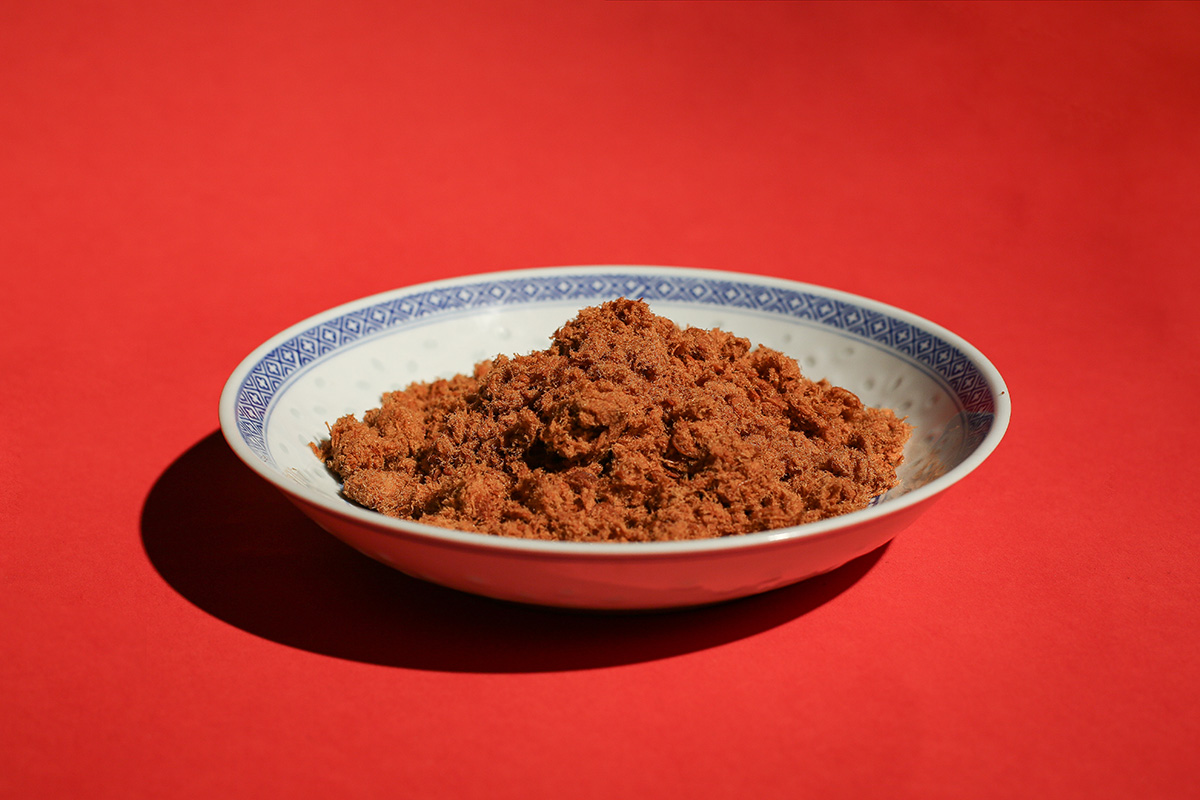 Moving from Taiwan a couple of years ago, Delilah Lin’s favourite food from home is still fresh in her mind. Century egg, pig’s ears, stinky tofu and jellyfish salad are some of her most-beloved dishes, but meat floss in particular is the closest to her heart. “Meat floss is something my family always had. I would always sneak into the kitchen and have a spoonful of it. And my grandad would be like, ‘Don’t eat that, that’s too salty to eat it on its own’”.

Delilah says the name might be lost in translation. “When people hear ‘meat floss’ they might think, “What the fuck is that?” But meat floss, sometimes known as meat wool, is a fluffy textured transformation of pork meat (though chicken and fish can also be used). The meat is stewed in sweetened soy sauce until the fibres can be separated. It is sweet and savoury and can be compared to the taste of jerky - so don’t be put off by the translation. 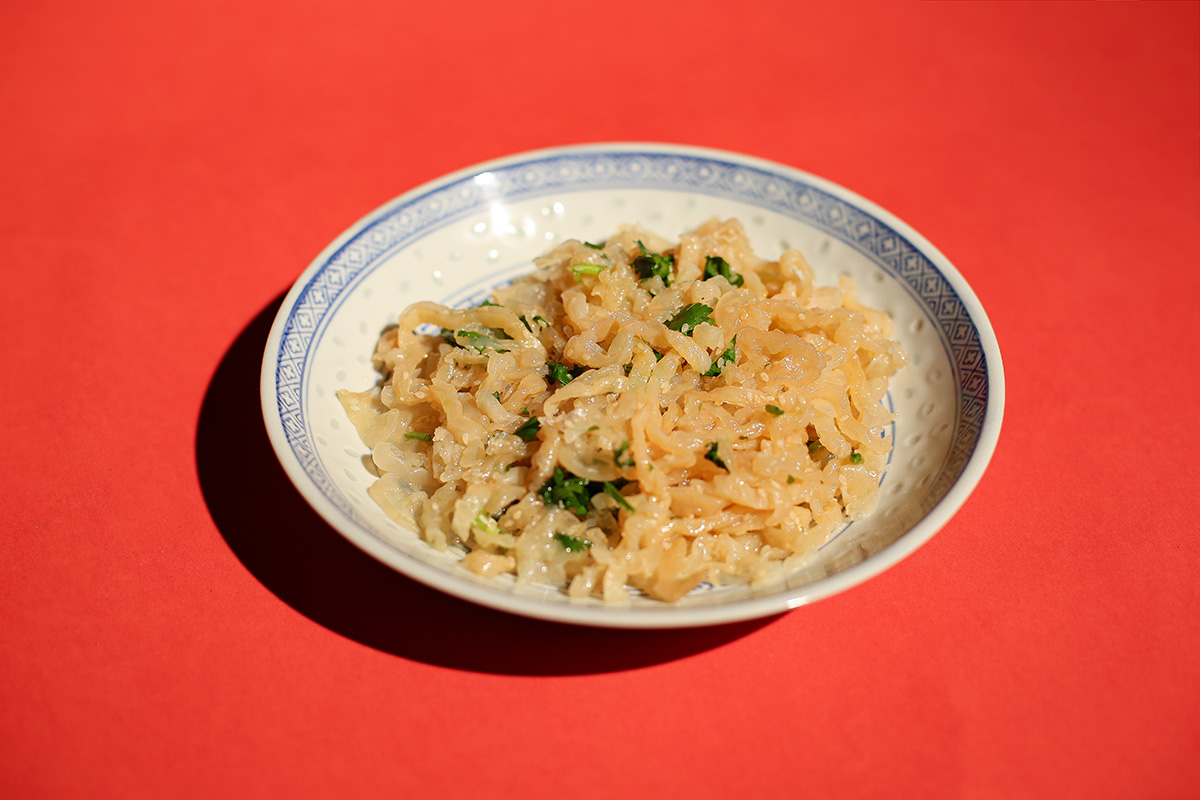 Florence, a Chinese-New Zealander, has a soft spot for century egg, especially when it accompanies a warm bowl of pork congee (a.k.a. rice porridge). Despite the name, a century egg is not actually 100 years old. It’s preserved in a concoction of clay, ash, salt, quicklime and rice hulls for several weeks to months. There is a hint of an ammonia smell but it also has a fatty, creamy taste that is similar to camembert or avocado.

She loves the “perfect level of saltiness” and the variety of texture in the dish; the silkiness of the porridge, the soft bite of the century egg, the slight crunch and chewiness of the fried dough pieces. For Florence, congee is more than just a simple dish. “It tastes like home, childhood and being cared for. Congee is the thing I was always allowed to eat if I was sick.” 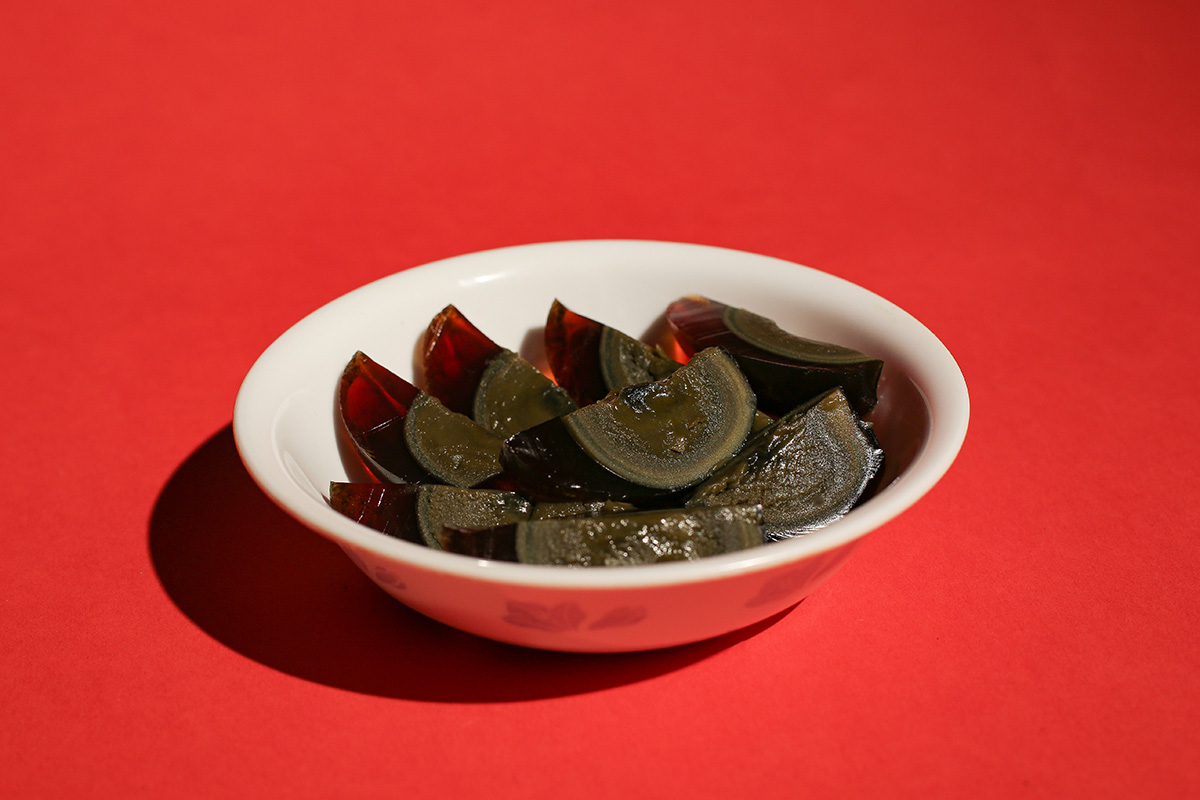 But Florence wasn’t always proud of Chinese cuisine growing up. After she learned people thought certain Chinese food was weird, she stopped eating things like jellyfish salad and tripe. Looking back, “you spend so much time just wanting to fit in with everyone else in New Zealand,” she says.

Crystal, who is New Zealand-born Malaysian-Chinese, “caught on the feeling of feeling different early on”. So, she stopped eating Chinese food at home and started cooking for herself. She’s never had chicken feet at yum cha because she knew “people thought that was weird”, and instead would order more acceptable items like shumai or dumplings. It was a way to assimilate, she says. “My behaviour towards food definitely stemmed from the racist remarks I was trying to avoid.” 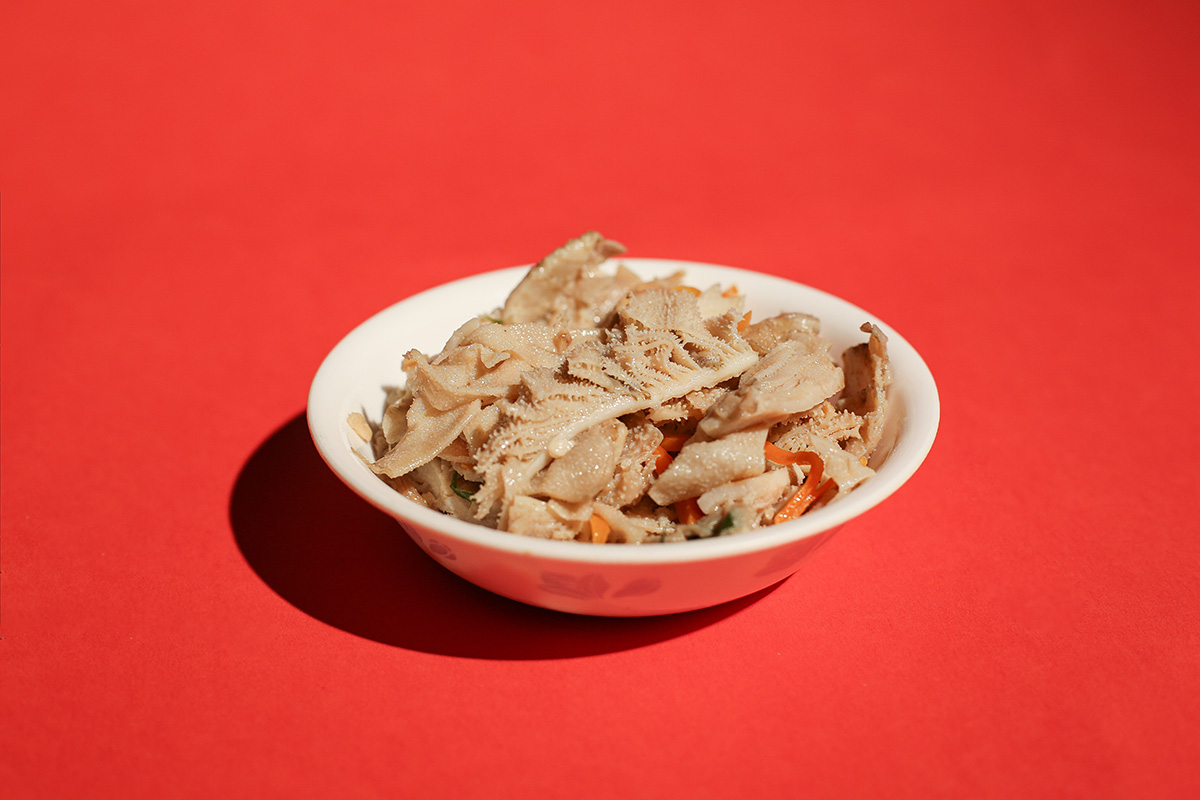 The coronavirus coverage has resurfaced old racist stereotypes but the portrayal of non-western food as “weird” is not new. It’s reinforced in popular culture, like James Corden’s ‘Spill Your Guts or Fill Your Guts’, where celebrities either answer tough questions or eat “really gross” food. The segment primarily features foods from non-western cuisines like jellyfish, century egg and balut (fertilized egg embryo that is a popular Filipino snack).

Being told the food you love is disgusting can make you ashamed of your culture, and can pressure you to assimilate by avoiding certain foods.  But Florence is overcoming the shame. It was a long journey for her to finally be able to love and appreciate her culture’s cuisine. But the key, she says, is “becoming comfortable with your own culture and knowing who you are.”