The Drug Enforcement Administration (DEA) are setting up shop in New Zealand. With the continual growing popularity of Class A drugs like methamphetamine amongst Kiwis, combined with the high market value here, the world’s top illegal drug exporters are targeting Aotearoa as a destination for their products. Re: spoke to the United States DEA agent who has been assigned to New Zealand.

“The thing about these transnational criminal organisations is that they’re willing to take advantage of any market where they can make money,” says DEA Country Attaché Brian Fleming, who has been assigned to New Zealand and has lived here since November last year.

The DEA was established in 1973 by then-US President Richard Nixon, as a part of the country’s War on Drugs. The purpose of this special police force was to target illegal drug use and smuggling in the US.

Since its inception, the agency has been credited with the demise of hundreds of the world’s top drug kingpins and their syndicates, like Colombia’s Pablo Escobar and the Medellín Cartel.

The DEA has 239 domestic offices throughout the US and 91 foreign offices in 68 different countries. 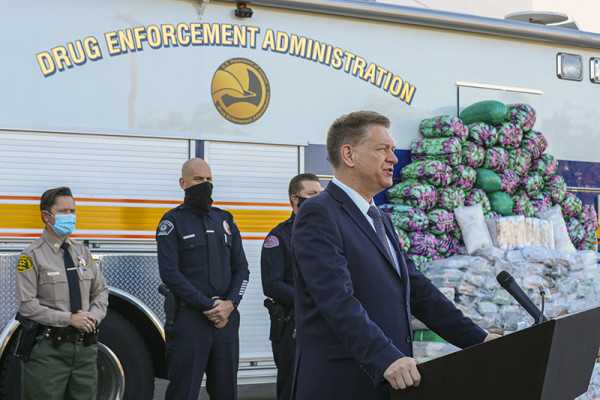 Fleming has been working with the DEA for 24 years, beginning his career in New York City. The 51-year-old started working on cases relating to Colombian-based heroin and cocaine traffickers, such as Pablo Escobar.

Fleming was then based in Hong Kong, before being transferred to North Carolina, where he began working on domestic US operations relating to Mexican-based cartels. He was then assigned to New Zealand late last year and arrived in the country in November 2020.

“As a young person, I always wanted to make a significant contribution to our society. Knowing the harm that is caused by drugs, that is one thing that grew my interest in the DEA, and another thing was knowing the challenges that come with being a special agent,” says Fleming.

When questioned on why the DEA have a presence in Aotearoa, Fleming says it’s about “growing on a strong working relationship” they already have with the NZ Police. Previously, New Zealand and its activities have been monitored by DEA agents based in Canberra, Australia.

Specially trained U.S. Drug Enforcement agents and Peruvian special anti-narcotics police attack and destroy cocaine paste processing plants in the Huallagua valley, Peru in the late 1980s. A seized lab goes up in flames after being set on fire by authorities during a raid. (Photo by Greg Smith/Corbis via Getty Images)

“It’s an effort by the New Zealand police and the DEA to attack these transnational criminal organisations together. That’s why I’m here,” Fleming says.

At present, Fleming is the only member of the DEA based in New Zealand. However, he expects at least one special agent and a number of admin staff to be based here before the end of the year.

They will be based out of Wellington but will be working closely with the NZ Police’s National Organised Crime Group based in Auckland. New Zealand currently has one officer based in the US working with the DEA to gather and share intelligence.

“The more that law enforcement agencies share information, the better we can tackle the issue and bring to justice the people that are operating in these organisations. What I always want to achieve is the efficiency of the information being passed between agencies,” says Fleming.

In relation to reports that New Zealand organisations have established links with groups such as the Sinaloa and Jalisco New Generation Cartels, who are said to be fierce rivals in the ruthlessly competitive drug market, Fleming says “there are cases that are active cases that involve those groups”. However, he says that despite this, New Zealanders should not be fearful of an increase in serious violent crime relating to drugs.

“I see it as a sign of the police department here being forward thinking by bringing us in and helping us and sharing with us their information, as well as we share our information to try and dismantle and disrupt these organisations,” Fleming says.

Growing occurrences of gun-related violence, a steady flow of convicted criminals plus gang members being deported from Australia, extremely high market prices plus demand for drugs, and new links between transnational criminal organisations and groups already here in New Zealand seems to be the perfect recipe for disaster. The effects of the DEA establishing a presence here are yet to be seen but it will no doubt be of concern for those operating in the trade and supply of illegal drugs in this country.