The body positivity movement has meant we are more educated and conscious of having a healthy body image than ever. But why are we still feeling bad about our bodies? A new article and illustration series, Like Bodies, Like Minds, is exploring the link between mental health and body image.

Angela used to visit schools and talk with students about how to cultivate healthy body image.

But sometimes, she was met with mild exasperation. Year 10s and 11s told her, “Yes, we know Instagram is bad for us and we should diversify our feeds and we shouldn't follow what the Kardashians are doing and we need to love our bodies. We know all of that stuff. But I still feel shit about my body.”

Like Bodies, Like Minds shows the interactions between mental health and body image through intimate, unfiltered stories from seven people. Re: spoke to the creators of the series, writer Angela Barnett and illustrator Ruby Jones, about how the way we talk about body image needs to evolve.

The body positivity movement of the last few years has seen mid-sized fashion models and Dove body soap ads encouraging us to love our bodies, influencers displaying their ‘Instagram versus reality’ selves (their ‘reality’ self has a lil’ tummy roll and makes a goofy face), and writers eviscerating arbitrary and harmful beauty standards like the thigh gap. 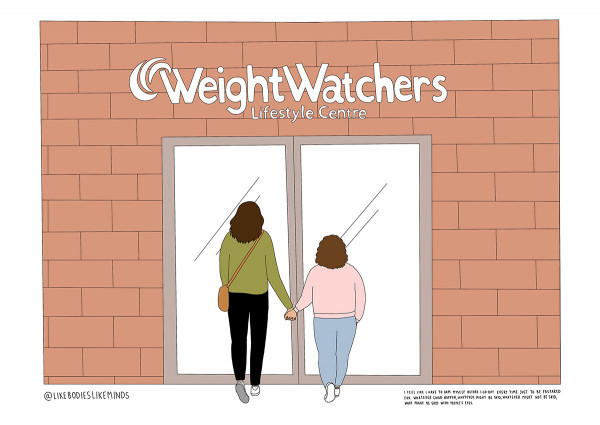 In the wake of this, we are perhaps collectively more educated and conscious of keeping a healthy body image than ever (and understandably a little fatigued of terms like “body image” and “body positivity” now that they’ve been co-opted to sell products, a fate that comes to all initially radical social justice movements).

But if we already “know all of that stuff” why are those Year 10s and 11s Angela chatted with, and probably people decades older than them, still feeling shit about their bodies?

One reason is that the onus is still on the individual. Since those high school visits, Angela realised mainstream conversations around body image focus on what you can do for yourself to attain a healthy body image, but not on how negative body image is a product of our surroundings.

“It’s a lot of pressure on you as an individual. You just have to make yourself feel better about the body that you're in.

“But we weren't questioning the societal structures. You actually feel better if you're able to go: Hmm. I'm being judged. And that's not my fault. It's actually the fault of these cultural structures that say there's a right or wrong way to have a body. It's due to racism and ableism and homophobia and transphobia. It removes a sense of failure on your own behalf that you haven't managed to get a better body image. Because it's bigger than one individual body.”

Through the seven stories of Like Bodies, Like Minds, Angela and Ruby hope to illustrate how those societal structures interact with people and their bodies, and how that in turn impacts their mental wellbeing.

In the series, we hear the stories of TJ, a musician who shares their experience of being Black and living with depression; Sophia, a law student who speaks with humour and incisiveness about living with a spinal cord injury; June, a trans woman who shares the painful disconnect of gender dysphoria; Te Manaia, an artist with scoliosis who reflects on the loneliness of feeling out of place at school; Amy, a fashion designer on how going into the world as a fat person is like going to war; Luke, a communications specialist who describes the connection between bulimia and fears around sexuality; and Casper, who talks about anxiety and depression when you’re a drag performer with Chronic Fatigue Syndrome. 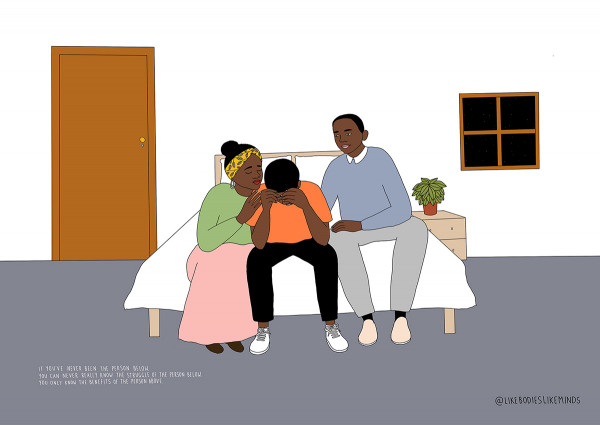 Each of the stories are told in first-person, and paired with illustrations by Ruby. Together, they provide visceral, specific pictures of what it’s like to experience the world in different bodies, based on how schoolmates and health systems and carers judge and value those bodies.

Ruby describes the stories as “peeking into a world” that you might not know. And if people are familiar with aspects of the stories, Ruby hopes they can take comfort in seeing people with similar experiences.

The series also takes care to expand our understanding of what body image is concerned with, beyond just weight and size. “It’s also about abilities, gender identity, sexual orientation, cultural identity, and the untalked about invisible illnesses,” says Angela. 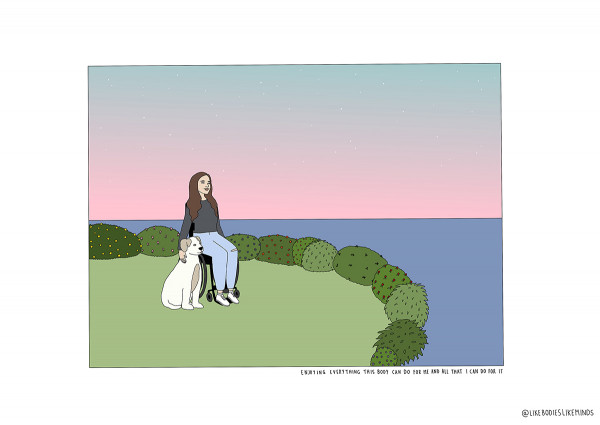 “With so much focus on mental health, it’s easy to think that body image doesn’t matter anymore – didn't the body positivity movement solve that?” says Angela. She hopes the stories of Like Bodies, Like Minds will demonstrate to more people how deeply connected our physical and mental selves are, and how our conversations around body image are not over because it’s a pressing mental health issue.

“If you’re in a body that is othered in some way, that increases your chance of mental distress – because that's really stressful. If you’re like Amy and every time you step out the door, you have to arm yourself up for the judgments or assumptions that might be put on you based on what you look like, that is stressful. And that increases your chance of mental health ills.”

You can read Amy, Luke, Te Manaia and TJ’s stories from Like Bodies, Like Minds on stuff.co.nz. The rest of the stories will be released later during this Mental Health Awareness Week.