The six-month Covid rent freeze ends today, and some landlords are putting up rent as fast as possible. Others tried to illegally raise rents during the freeze. The government introduced new rental legislation last month, but in New Zealand there is no limit to how much a landlord can raise rent. Is it time for us to enforce a rent cap?

In March, the government established a six-month rent freeze to protect tenants during the Covid-19 pandemic. Landlords were also largely banned from terminating tenancy agreements. If landlords tried to increase rent or kick tenants out during this time they could be fined $6,500.

But on September 25, all of this protection ends.

Some landlords are already planning to immediately hike up rent prices, while others didn’t even bother to wait.

During lockdown Liam* was living in a shared flat in Wellington where each room had an individual tenancy agreement. He says his landlord tried to raise the rent three times during the rent freeze, and only backed off when they threatened to report this to the Tenancy Tribunal. “They wanted to put it up $50 a week, and that was per room, not flat. A 25 percent increase,” he says.

“The property manager was useless and told the owner it was a 60 day rent-freeze not six months, so we kept getting emails from the owner in Belgium saying ‘you're all back to work now so rent can go up’. They just didn't get it,” he says. “It’s so hard as a renter.” Re: has seen email correspondence which confirms Liam’s story.

Auckland’s market is not much better. According to Barfoot and Thompson, the average Mt Albert rent price is $615 a week, but just five years ago it was $497 a week. So in the last five years rent has gone up in Mt Albert by 23 percent.

Renters United Organiser Robert Whitaker says landlords increasing rent during or immediately after the rent freeze is “incredibly bad faith.” “Many people are still dealing with the economic impact of the pandemic. This rent increase will be devastating for renters, who tend to be some of the most vulnerable members in society.”

Renters United conducted a ‘Renting Under Lockdown’ survey which found that even before lockdown, four out of five renters were paying unaffordable rents (defined as more than 30 percent of gross household income). Once lockdown began, two out of three renting households had seen their income drop by more than a third.

Liam had only moved into the property in March, two days before New Zealand went into lockdown. There were no upgrades to the property in this time and Liam says he wasn’t given a reason as to why the rent was increasing. So for a number of reasons, but mostly due to the unaffordable rent, Liam and one of his flatmates spent two months searching for another flat. But after failing to secure one, they are now living in a boarding house in Wellington.

Liam’s boarding house costs him $170 a week, which includes power and internet. It’s significantly cheaper than the $250 his old room increased to, but he does share kitchens, bathrooms and living areas with 30 other people, which Liam says “isn’t ideal but at least it’s steady.” 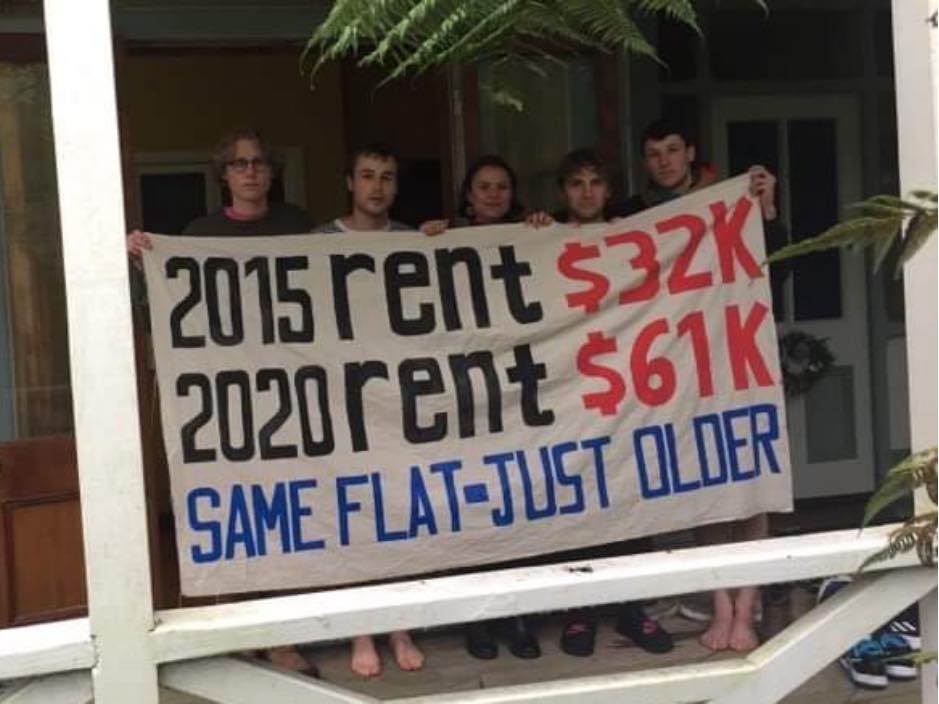 Wellingtonian flatters have had their rent double in five years. Source: Renters United

Last month the Commerce Commission warned property investors they were at risk of cartel-like behaviour after they were caught discussing plans to increase rents, en masse, in online forums. The concern prompted Prime Minister Jacinda Ardern to ask landlords considering immediately raising rents to act with a “level of fair mindedness” and focus on “making sure that they have long-term tenants that are able to sustain their rents in a really difficult environment.”

Russell Jones is a landlord based in Auckland. While acknowledging that everyone's situation is different, he says raising rents substantially at this time is “ridiculously unfair” on renters.

“I think that it's poor management on their part if suddenly a landlord needed to put up the rent by a massive amount,” he says. “I'm more worried about keeping a tenant than putting up rent at the moment.”

Russell hasn’t raised the rents in one of his properties in Auckland for eight years, but admits this wasn’t the smartest move financially. He wanted to bring the rent up closer to market rate this year, but when Covid-19 hit he “didn’t have the heart to.”

“When I look at my investments I have made, I know I've made good capital growth, so I'm not going to be greedy about it. And I'd much prefer to keep a good tenant and give them a discount,” he says. “I think that a good tenant should have some security around their living arrangement.”

If anything, Russell says rents should be reflecting how low interest rates are at the moment, which he says is a “humongous yield” for landlords.

Chief executive of the NZ Property Investors' Federation, Andrew King, says looking into the future, when interest rates inevitably go up again, is when things are going to get “much harder.” “It will be a time when landlords need to remember to treat their tenant like a customer.”

“If they want something, you should look at how you can provide it. Because you'll keep them  happy, and they'll stay longer. And that’s better for everybody, including your business.

So if the best return on your investment is to keep tenants happy and able to afford rent, then why are we hearing stories like Liam’s?

The gaping hole in our rental laws

New tenancy legislation introduced in August bans rent bidding, limits rent increases to only once every 12 months (it used to be six months) and ditches no-cause evictions (where a landlord could end a tenancy for any reason after 90 days, or after 42 days because they were selling the house).

But one gaping hole in our rental laws remains. There is still no limit to how much a landlord can increase rent. They are only restricted by how and when they make these increases.

So even though landlords can now only increase rent every 12 months, nothing is stopping them from increasing the rent at twice the speed (or more) in one go. Which explains the huge leaps in rent many tenants like Liam are being faced with now.

Renters United’s Fair Rent Now petition is calling on the government to limit rent increases to no more than inflation.

Robert from Renters United says the legislation was primarily written in the 1980s when more New Zealanders were homeowners. In 1986, 75.2 percent of people owned their own home. But by 2018, it was estimated at 62 percent, a decrease of 13.2 percent.

“The Government has failed to enact meaningful reforms to address rent unaffordability so the legislation doesn’t reflect the current needs of our society,” says Robert. “The most important step would be introducing a rent price cap.”

A price cap would mean rent could be increased by no more than the Consumer Price Index (1.5 percent in June 2020), which would allow rent to more fairly reflect inflation and increasing income levels - not a market inflated by a severe housing shortage.

This would bring New Zealand more in line with countries like Canada. In Ontario, the maximum percentage a landlord can increase most tenants’ rent in 2020 without approval from a tenancy board is 2.2 percent. Which means if your room was $250 a week, it could only go up to $255 that year.

To put this in perspective, remember Liam was facing a 25 percent increase for his room.

A cap sounds wonderful, but the Prime Minister recently said the government isn’t looking at restricting the size of rent increases. Instead they are leaving the Commerce Commission responsible for “keeping an eye on whether or not they're seeing behaviour here that would not be in keeping with legislative obligations."

Renters United’s Fair Rent Now petition is calling on the government to limit rent increases to no more than inflation. They also want to see extensive reforms to the Tenancy Tribunal so it is more efficient and accessible, the standard of housing significantly increased, and strict licensing and regulation of property managers.

Think your landlord is being unfair? Here is what you can do.

Some useful resources for advice:

Community Law has this frequently asked questions resource, they are also a free legal service you can seek one on one advice from.