There is a new wave of white nationalism with a very different approach and culture. They present in the world as clean-cut men and women who take physical wellness very seriously.

In the hours following the Christchurch terror attack, the phrase “This is not us” began to flood social media. It didn’t take long for this response to be criticised – with commentators highlighting that it shows ignorance of the experiences of non-white people, now and throughout the history of our country.

Another fault of this response, is that it fails to recognise that the ideologies of the accused shooter already existed in this country. New Zealand has a long history of white nationalist organisations, and in recent years the number of these groups and their members have been increasing.

For this small but growing number of New Zealanders, arguing “This is not us” took on a very different meaning, as they tried to distance themselves from the accused shooter.

Not long after this attack, New Zealand’s two most prominent white nationalist organisations produced statements condemning the actions of the accused shooter and distancing themselves from the actions involved.

Fifty Muslims were killed and as many injured in attacks on two Christchurch mosques, so there is a certain amount of relief that the response from white nationalist organisations in New Zealand was to condemn the use of violence.

New Zealand’s oldest white nationalist organisation, the National Front, posted a statement to Facebook shortly after the attack (which has now been removed):

“At the present time, the events in Christchurch do not involve the New Zealand National Front or its members. The National Front does not condone or agree with this type of wanton murder of innocent people regardless of their religious beliefs. We believe in freedom of speech and freedom to worship whatever god you chose.”

The National Front has taken down its official Facebook page.

The immediate response of many in the comments was to question the meaning of ‘At the present time’. In replies to this post, the National Front said this phrase meant that, with details still unfolding, they didn’t know for sure that no one in the organisation had been involved. One National Front response read: ‘We have putout (sic) contacts with organisations we have relations with to see if any of them know. But someone trained him, someone paid his costs, and where are the missing firearms?’ Essentially, the National Front is claiming they didn’t have a relationship with the alleged shooter, but believe someone in the network of New Zealand’s white supremacists likely did.

Though the organisation has distanced themselves, there remain striking similarities between the ideology that allegedly motivated the accused and the beliefs of The National Front. Ideas such as diversity being equivalent to ‘white genocide’, fears of low Caucasian reproduction rates, a belief in the separation of races – these were the predominant ideas that were presented during my interview with the organisation’s community manager Chris McCabe in July last year.

He also claimed these ideas are gaining traction in NZ. Since the election of US President Donald Trump in 2016, he said the organisation had seen a renewed level of interest and engagement – at that time, he said they had over 1000 paying members, and rising.

This ideological traction is something I saw first-hand during the hours I spent interviewing McCabe as he handed out pamphlets featuring phrases such as “It’s OK to be white” and “Diversity = white genocide”.

I was surprised how many people seemed receptive to these messages. One middle-aged white man walking down the street with a baby in a stroller and a toddler at his side stopped for several minutes and nodded along as the community manager talked him through “the predicament of white people”. At which point, the man smiled and took the pamphlet, saying “I like it”.

However, the highest potential for white supremacist recruitment doesn’t appear to be from pamphlets, but online. There is a new wave of white nationalism born out of the internet which shares much of the same ideology as the National Front, but with a very different approach and culture.

This new wave is primarily born out of online forums such as Reddit, 4chan and 8chan, which have enabled users to share their ideologies, form communities of similarly minded supremacists and radicalise each other. They are generally well-versed on alt-right writing, and are active on online platforms. They communicate using a wealth of alt-right memes and symbolism, and present in the world as clean-cut men and women who take physical wellness very seriously.

This new generation of white nationalist culture is represented in NZ by the youth-orientated organisation, Dominion Movement. This group has been active in the past year, holding regular events and meetups where they have stickered and postered throughout Wellington and trained in martial arts together. In the second half of 2018, they started an Auckland-based contingent. According to posts on white nationalist websites, last month there was a meeting of 50 Dominion Movement delegates from all over the country.

Within hours of the attack, the Dominion Movement’s website was updated to consist only of the following statement:

“The Dominion Movement categorically and without reservation condemns the events in Christchurch. Our movement nor any of its members have ever had any communication or association with the perpetrator.

From day one, our movement has been committed to non-violent solutions to the problems affecting our nation. Our approach has always been to improve ourselves and build a community based upon positive, healthy attitudes and lifestyles. Terrorism is absolutely antithetical to our worldview and our cause.

In light of the atmosphere which is emerging in the wake of these events, it will be impossible for the Dominion Movement to continue our work. We will be ceasing all operations immediately. This site will stay online for a few days before shutting down permanently.”

The Dominion Movement kept the language and viewpoints on their website moderate, positioning themselves as an activist organisation for white New Zealanders. Their posts focused on growing a community of like-minded people, exercise and their stickering campaign.

But, while their posts have remained moderate, the images they associate paint a different picture. Much of their imagery has allusions to more violent branches of white supremacy, including Nazi iconography and slogans which were chanted at the Charlottesville rally in 2017. 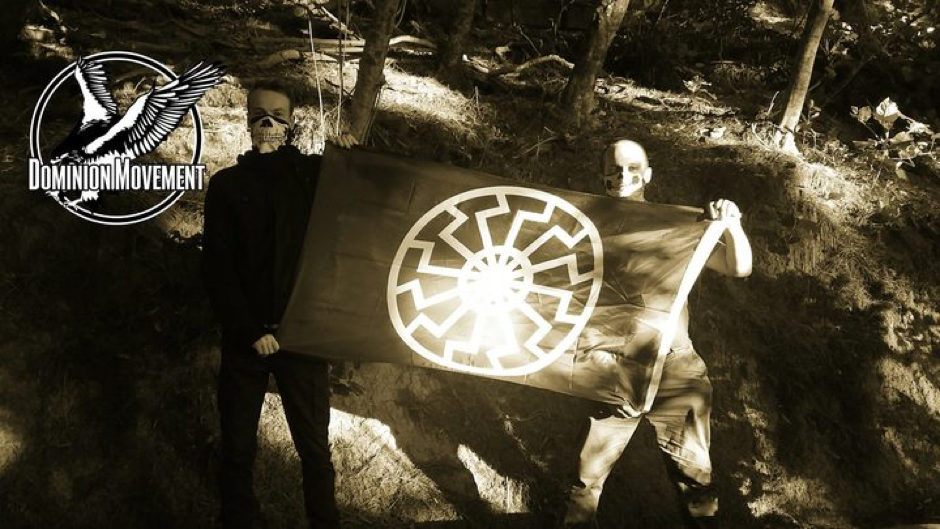 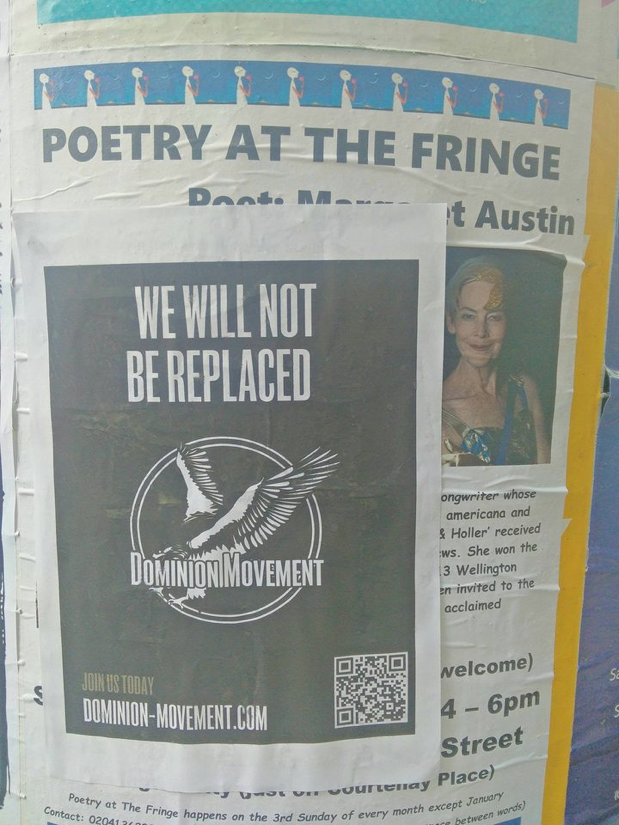 However, the Dominion Movement website hasn’t actually been taken down, but has been made private and now needs a username and password to access. Additionally, despite the group claiming they were ceasing all operations on Friday, there were reports of newly distributed Dominion Movement stickers and posters throughout Nelson on the following Tuesday.

Though it’s unclear how active these groups will be following this attack, the fact remains that they have been very active in the past – campaigning throughout the country with the same ideology expressed by the accused shooter. Yet, these organisations and their members have not been treated as a threat by Government agencies. It was revealed by RNZ last week that in the past 10 years, there has been no specific mention of the threat posed by white supremacists or nationalists in publicly available Secret Intelligence Service or GCSB documents.

These organisations now seek to distance themselves from these events, claiming that though they share ideas they don’t share methodologies.

However, following the Christchurch attacks, these shared ideas are now under intense scrutiny.