As of today, student allowances and student living costs will go up by $25 a week.

For Brooklyn McKenzie, a student at Victoria University, the increase is a huge relief.

After drawing out the maximum amount of living costs to pay their $225 weekly rent, some weeks they are left with $17 to survive on.

The 21-year-old works as a security guard in Wellington but has found it hard to secure regular shifts and for the past month, they have been out of work.

“I hate having to ask for help when it comes to food grants from StudyLink or I’ll have to call up my family and be in tears because of how ashamed I feel.”

“But I just wasn’t comfortable at that state of income, I was barely making my bills and was basically just eating bread.” 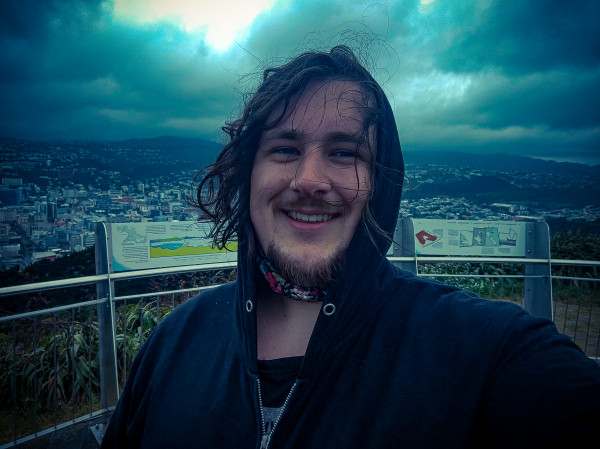 Brooklyn McKenzie says “that $25, it doesn't sound like a lot to some people, but it really does make a difference for me”. Photo: Supplied

Brooklyn says this extra $25 a week feels like a weight off their shoulders.

“That $25, it doesn't sound like a lot to some people, but it really does make a difference for me.”

“There are some days where I'll look at my pay, and I'll look at all the bills that I owe and it just won't add up. And then I have to just immediately go and study,” Brooklyn says.

“But how am I supposed to focus? It’s constantly weighing on my mind.”

More needs to be done to support students

Along with the new increases, Brooklyn also wants to see all students be eligible for an accommodation supplement to help cover their rent.

Currently, only students who are eligible for a student allowance can be granted this.

They also want to see the parental income criteria stripped from student allowances.

Student allowances are weekly incomes for students whose parents earn below a certain income that do not need to be paid back.

As the StudyLink criteria currently stands, if your parents or guardians earn less than $99,792 a year if you live with them or $107,599 if you don't live with them, you are eligible for a student allowance.

Most students are not eligible for student allowances, but instead they can access student living costs. These are weekly loans up to $281.96 that can be borrowed from the government, but they need to be paid back.

Brooklyn says the criteria assumes that all students are in a position to rely on their parents for support.

“Not everyone has that relationship with their parents that makes them feel comfortable enough to reach out for money. They might have been abused or estranged, or just living completely independently.

“It feels a bit invasive to just assume that everyone has the ability to borrow money from their parents.”

Student life is a ‘poverty trap’

“The government is giving you 25 bucks more now, but as soon as your rent goes up or food gets more expensive, that money is gone. And each time it feels like it’s impossible to work yourself out of that hole.”

“I think it’s really sad that the amount we are allowed to borrow, which we still have to pay back, doesn’t keep up with how expensive it is becoming to live,” Nikita says.

On top of her studies, Nikita nannies children two days a week to help her get by.

She says the expectation on students to work while they’re in school makes it harder for students to focus and dedicate themselves to their studies.

“When you support students, you have these happy and flourishing people who can be passionate about what they are doing and then take that passion into the world with them, which helps everyone.

“But it feels like [universities] are trying to squash that. And instead are saying ‘nah we can make a huge profit off of them, so let’s do that.’

“What kind of message is that sending to high schoolers who are deciding whether or not they want to stay in education?”

The fight for a Universal Education Income

Nikita wants to see the implementation of a Universal Education Income to ensure all students are supported during their studies, especially post-graduate students who are currently not eligible for a student allowance unless they are completing a bachelors with honours.

A Universal Education Income (UEI) is a weekly income that would be available to all domestic tertiary students and wouldn’t need to be paid back.

New Zealand Union of Students' Associations (NZUSA), who has been campaigning for a UEI, says the maximum entitlement for a single student not living in their parents’ home would be $470 a week - a $100 increase to the current student allowance entitlements.

Its cost breakdown estimates this would cost $3.7 billion a year, a $2.6 billion increase on the current student support scheme.

In response to the recent increases in student support, NZUSA national president Andrew Lessells said in a press release: “Ignoring the Universal Education Income proposal while increasing allowances by an amount that doesn’t even match the rent hikes that most students have seen is a slap in the face.”

“Add into the equation that most students aren’t even eligible for the full student allowance, celebrating this token gesture just seems callous when students are dropping out because they can’t afford to live,” Andrew says.

He says it is time to move away from a discriminatory and ineffective system to make sure all students can afford to learn, regardless of their age, where they live, or what they study.

More support for students with illnesses

Psychology student Alice Haste is grateful for the increase but wants to see more support for students who have illnesses that limit their ability to work alongside study.

Alice was recently diagnosed with psoriatic arthritis, an auto-immune disease that makes it painful for her to stand up for long periods of time.

Because of this, she has been unable to find suitable employment and relies on student living costs as her only source of income.

“I live in a small town called Dannevirke and the jobs are already scarce as it is. But most jobs are in retail, hospitality and working in supermarkets - all of which I’m not capable of doing right now.”

“It’s not ideal to be taking out more debt, but it's crucial for me to have that extra money every week because I cannot go and take on a part-time job,” Alice says.

Alice says there is a gap in the system when it comes to being a student with an illness.

She says her illness is not seen as a disability so she is not eligible to get StudyLink's disability allowance.

Alice says she is also not considered eligible for other funds from Work and Income.

“The only option I’m left with is debt. It’s really frustrating.

“I just have to accept I’m going to have $40,000 worth of debt that I wouldn’t have had if it wasn't for an unforeseen illness, otherwise I would have still been working.”

Alice says it is time student voices are listened to because when students are supported to get educated and trained, it benefits the whole country.

This follows an investigation into an internet troll who was harassing female politicians.

Re: has put together a checklist of things to look out for when you fork out for your next bottle.