We asked someone why they think 5G is linked to Covid-19. Then we asked a health expert if he agreed. Spoiler: he really didn’t.

In the midst of a pandemic, a harmful conspiracy that Covid-19 is caused or maintained by 5G is circling the globe. While some people think 5G towers literally emit viruses, others say the new technology could weaken our immune system, leaving us vulnerable to Covid-19.

The baseless conspiracy gained traction when a Belgian doctor linked the global pandemic to the “dangers” of 5G technology in this newspaper interview in January. Not long after, celebrities and popular conspiracy theorists, like David Icke, jump in on the action. It spread so far YouTube and Facebook are now devoting resources to limiting the amount of content that disseminates the conspiracy.

Believers say 5G transmitters cause or spread the virus because this technology “breaks down the human immune system”. They say it’s not a coincidence that Wuhan, China was the epicenter of Covid-19 and also one of the first cities to extensively roll out 5G - even though 50 other cities in China, including Beijing and Shanghai rolled it out at similar times (and that was 18 months after it was first launched in the UK).

But this theory falls short when you take into account the amount of countries that have Covid-19 but not 5G. For example, Iran has suffered over 67,000 cases and 4,000 deaths but the country is yet to have access to this advanced technology.

The conspiracy has become so topical a journalist felt the need to ask Prime Minister Jacinda Ardern to comment on it at the Covid-19 daily press conference on April 8th. In response, the Prime Minister said: “Just simply that is not true, I can’t state it clearly enough. I almost hesitate to speak to it on this platform, it is just not true.”

Director-General of Health Dr Ashley Bloomfield and sign language interpreter Alan Wendt’s faces before, during, and after the question about 5G.

The conspiracy has been written off as “utter nonsense” by countless authority figures. Health professionals and scientists are actively trying to dispel the myth, fearing it could derail the vital collective response needed to fight against the spread of Covid-19.

Curious as to how 5G could possibly weaken our immune system or cause Covid-19, I went searching for someone who had some ideas. That’s where I came across the popular Facebook group 5G-Free New Zealand. I asked to speak to someone and I was promptly given Mike Vaughan’s number, which, unsurprisingly (given 5G is a mobile network), was a landline.

My preconceived stereotype of an extreme tinfoil-hat nutter was quickly challenged. Mike was a smart guy who had clearly read up a lot on the issue.

While Mike does not believe 5G directly causes Covid-19, he says exposure to wireless radiation could have detrimental impacts on the immune system. “There are many, many studies showing that this is the case,” he says. “And obviously, if you'd lower the immune system that is not going to help people to fight or recover from any virus.”

One of the studies Mike refers me to is this research review, but even the authors conclude “controversial results” that are “inconsistent” and “incoherent”. Other studies that make this claim have been discredited by government organisations like the Australian Radiation Protection and Nuclear Safety Agency (ARPANSA), who say the studies have not “provided evidence of changes in immune function” and therefore “there is no established evidence that low level radio wave exposure from 5G and other wireless telecommunications can affect the immune system.”

Regardless, Mike believes that 5G radio waves will be absorbed by the first few millimeters of our skin. “So one of the big concerns about these higher 5G frequencies is that by being absorbed on the skin, they can potentially affect the skin's regulation of the immune system. Now, this is not proven to be true, but also it's not proven not to be true.”

One of Mike’s key concerns was the lack of testing for 5G technology before it was rolled out. In a statement on his website he says “because the [5G] technology has been rolled out without having been tested for possible health effects, at this point in time, there is no real way to know for sure whether or not 5G may be linked in some way to Covid-19.”

This type of thinking is what health professionals have been trying to dispel. Auckland University Professor of Health Psychology Dr. Keith Petrie, who studies the placebo and nocebo effect of modern health concerns, is one of them. When I ask Keith about the link between 5G technology and Covid-19 or immune-deficiency he tells me it is “absolute nonsense”. “People should not waste their time on such conspiracy theories.”

“The scientific literature quite clearly shows no association between radiofrequency, electromagnetic fields from cell base stations, 5G towers or cell phones and negative health outcomes.”

He acknowledges that some studies have shown people do experience symptoms such as headaches, however only when they are told they are being exposed to radio frequencies like 4G or 5G. In studies where people aren’t told if they are being exposed, there’s no symptoms. “A large number of double-blind trials where people do not know whether they've been exposed or not shows no relationship between exposure and symptoms.” Keith says there is no scientific research to suggest radio frequencies, like ones from 5G technology, are harmful to the human body.

But Mike isn’t convinced. He believes that no one can currently make a firm statement about 5G’s impact until sufficient studies are replicated by several different independent scientists.

However, the Ministry of Health is firm in its stance that 5G radio waves that comply with New Zealand exposure limits can not weaken the immune system or make people vulnerable to infection.

The Ministry is clear there is “nothing unique to 5G that would make it interact differently with the body than other radiofrequency fields (radio signals). For this reason, all the previous research on radiofrequency (RF) fields and health also tells us about the effects and safe levels of 5G.” Put simply, because the radiofrequency fields of 4G and 3G are safe, this research also applies to 5G because it is just another application of radio technology.

Even if the radiofrequency fields are higher, they are still well within the safety range. New Zealand's radio frequency maximum exposure levels are 3 kHz to 300 GHz. According to the Ministry of Health, 5G services in New Zealand will initially use frequencies around 3.5 GHz, and higher frequencies will be around 26 GHz.

The Health Ministry states these “safety limits are based on a careful review of the research into the health effects of exposure to radiofrequency radiation and include wide margins for safety.”

So why are some people so worried?

5G radio waves have a shorter wavelength than with 4G. This means the waves don’t travel as far, so instead of there being a small number of centralised towers like with 4G, a large number of 5G cell towers will need to be dispersed around a city close together, about 250 meters apart. Some people are concerned that having a 5G cell tower near where you live will have an impact on your health.

There is no evidence to suggest this is true. 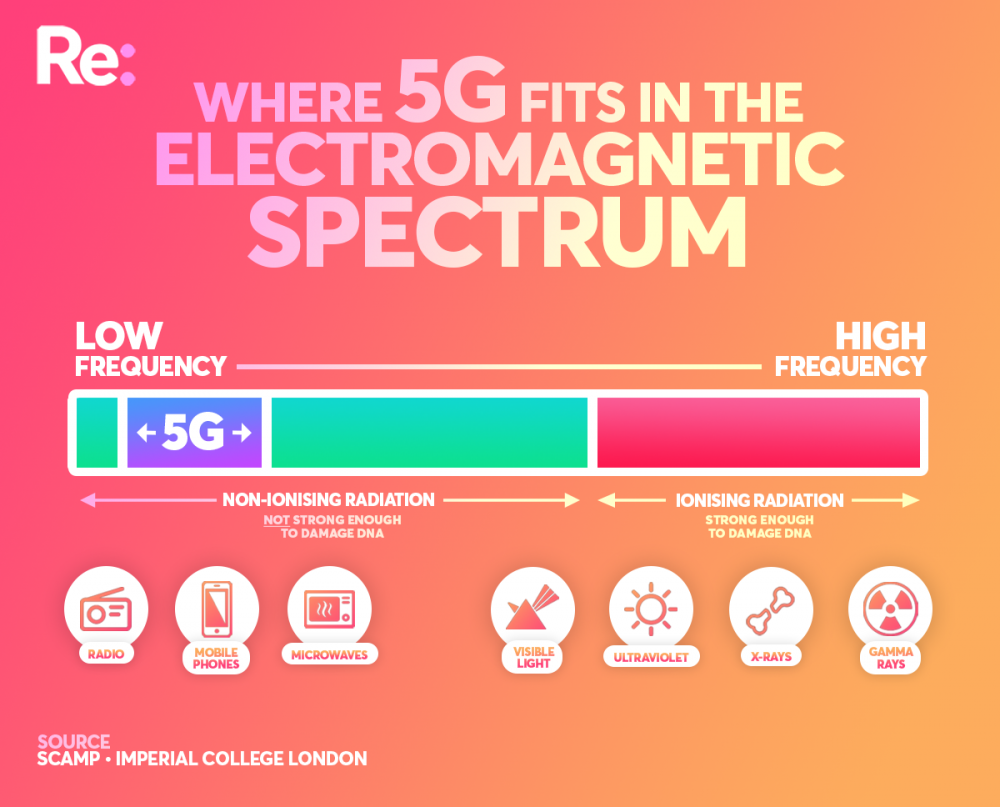 Every type of frequency can be measured on the electromagnetic spectrum. Lower or weaker frequencies like 5G radio waves are non-ionising, which means they can not alter or damage the DNA inside cells, unlike the much stronger ionising waves used in X-rays or UV-rays. Although 5G does emit a higher frequency than earlier generations (2G, 3G and 4G) it is still not nearly strong enough to penetrate the skin, as ionising waves do. In other words, 5G radiation can not weaken your immune system or cause or spread viruses like Covid-19.

The Ministry of Health, alongside Public Health England, Australian Radiation Protection and the World Health Organisation maintain there is no link between non-ionizing radiation and adverse health effects.

Keith says humans have had anxiety towards new technology throughout history. When telephones were introduced there was fear they increased aural pressure, giddiness and pain. Or when radio signals came about, people believe they caused increased nausea. But he is confident that 99 percent of people, particularly in New Zealand, won’t believe the conspiracy “because there is no basis for it”. He points out historically there were a lot more pandemics before this kind of technology ever existed.

He urges people to see how much of an impact the lockdown has had on flattening the curve in New Zealand and around the world. “If you believe this virus is caused or somehow transmitted by 5G, how does this make such a big difference?” he asks.

Meanwhile, Mike agrees that lockdown regulations and immune protection activities like washing hands and social distancing are working. However, he also thinks “it is sensible to use corded phones and hardwired internet connections whenever possible to reduce the stress on your body that might otherwise occur from chronic exposure to wireless radiation.”

It is completely up to you (and harmless) if you want to avoid using 5G devices or limit your exposure to wireless technology. However, conspiracies like these become incredibly destructive when they snowball into harassment and the destruction of essential resources.

A 4G cell tower on private farmland in Waiharara was days away from being activated when it was destroyed in an arson attack last month. The incident has been linked to the online hoax, despite no 5G towers being available in Northland. 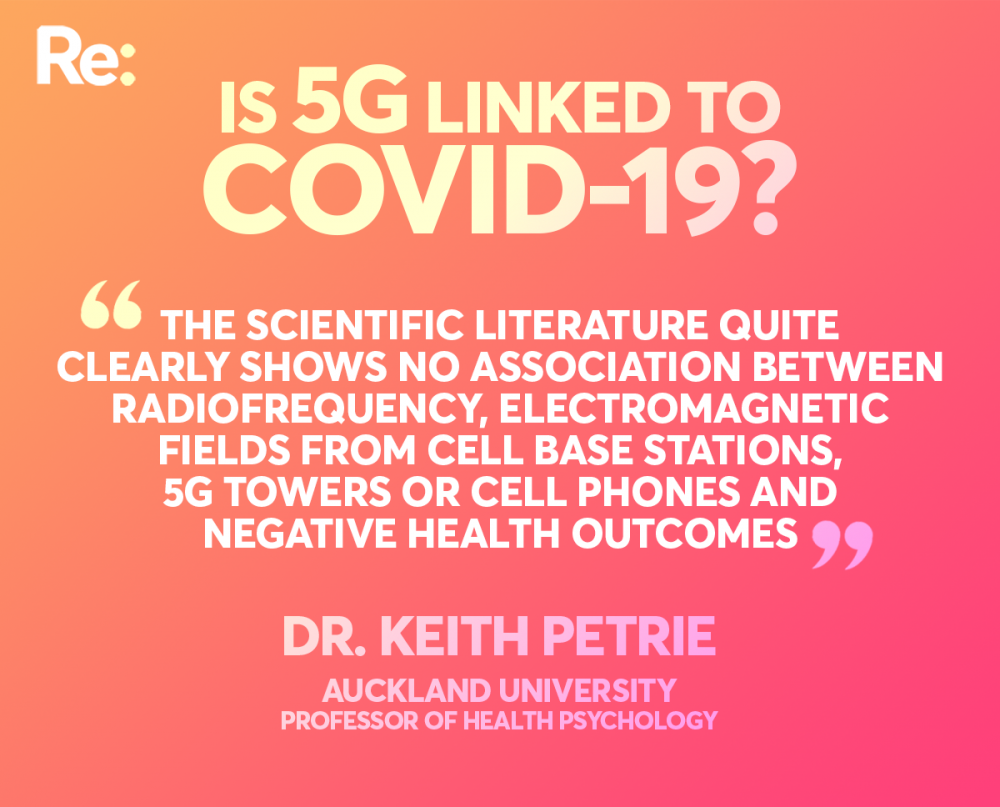 In the UK, people have also set fire to phone masts and verbally abused broadband engineers because they are convinced this technology is responsible for the global pandemic. Samoa's Office of The Regulator, which monitors all telecommunications in the country, was so concerned the fake news had influenced the country, they issued a statement specifically asking the public not to destroy critical infrastructure at a time when it is most needed - even though 5G has not been launched in Samoa and there is no equipment in operation.

Groundless conspiracies being passed off as credible information is incredibly dangerous, especially during a pandemic. However, the curiosity and demand for more research that stems from these theories should not be discouraged. People should be asking questions about the technology available to them and what it means for their health. And independent professionals should continue to research the rapidly evolving world around us to answer these questions.

But just to be clear. 5G does not cause Covid-19. That is one thing we know for sure. 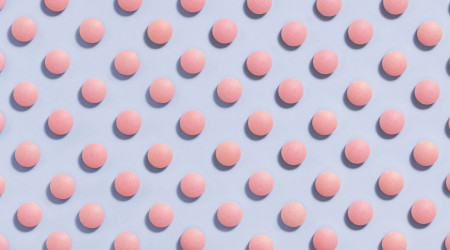