The growth of Aotearoa’s dairy industry has largely been driven by the use of fertilisers such as synthetic nitrogen fertiliser, which is used to grow enough grass to feed the country’s six million cows.

But the fertiliser has raised concerns among organisations such as Greenpeace as it has  been linked to toxic algae that destroys the habitat of freshwater species and higher rates of colon cancer.

A recent survey conducted by Greenpeace found that more than half of New Zealanders want to see the use of synthetic nitrogen fertiliser phased out.

The survey, commissioned by Greenpeace and conducted by Horizons Research in December 2021, asked more than 1000 New Zealanders if they believe the Government should phase out the use of synthetic nitrogen fertiliser in Aotearoa.

The 1018 people surveyed were randomly selected across a range of ages, political leanings, and ethnicities.

The largest difference in response was based on political affiliation with 86 percent of Green party voters and 64 percent of Labour voters in favour of a phase out.

At 35 and 38 percent, there was less support from ACT and National voters.

Greenpeace spokesperson Christine Rose says the survey results show New Zealanders are aware of the damage being done to the environment by these fertilisers, and the scale of agriculture they make possible.

“People know there is a problem – anyone keeping an eye on what rivers you can and can't swim in during summer will see very clearly what damage is being done to our taonga from too much synthetic nitrogen fertiliser and too many cows,” Rose says.

“There is clear evidence that because of the climate, fresh water, health and biodiversity impacts, that this model is unsustainable.” 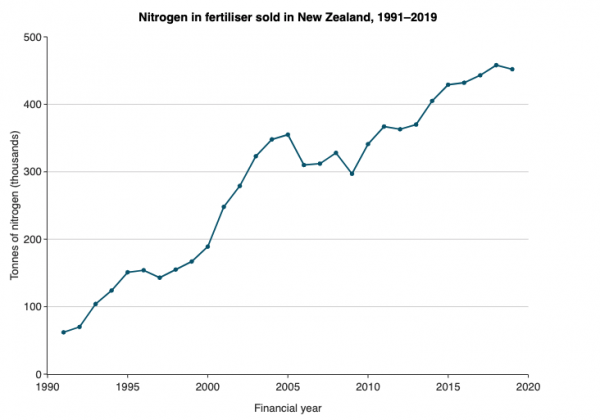 A graph showing the increase in Nitrogen fertiliser sold in NZ over the past thirty years. Credit: Stats NZ

The impact of nitrogen fertiliser

After it is applied to paddocks, nitrogen fertiliser flows through the soil and into our rivers and lakes.

Excessive nitrogen in our freshwater promotes the growth of invasive algae that is toxic and destroys the habitat of freshwater species.

As a result, 76 percent of our fresh water fish are on the threatened or at-risk species list.

Nitrogen fertiliser also plays a significant role in our emissions.

Nitrous oxide makes up 10 percent of all emissions in Aotearoa, and 93 percent of that comes from agriculture through nitrogen fertiliser and animal urine.

While it has a smaller presence in our atmosphere than carbon dioxide, Nitrous oxide is 300 times more warming, and lasts in the atmosphere much longer.

There are also human health impacts from drinking water with high levels of nitrogen.

The most well-known is blue baby syndrome, where infants who drink this water can lose the ability to properly absorb oxygen, which can result in disability or death.

Recent research has shown that prolonged consumption of water high in nitrates also increases the risk of bowel cancer.

Re: News explored the dairy industries use of feed and fertiliser in-depth in the third episode of our series, Milk and Money.

Can we actually phase it out?

In 2021, a limit was placed on the amount of nitrogen fertiliser that can be used in New Zealand.

Each year, farmers can’t apply more than 190 kilograms of nitrogen fertiliser per hectare (which is about the size of a rugby field).

But Greenpeace believes for the agricultural sector to be sustainable, it needs to completely phase out nitrogen fertiliser, and transition to a regenerative model of farming  – which attempts to harness natural nutrient cycles instead of inputs to produce grass.

You can read more about regenerative farming in our article here. 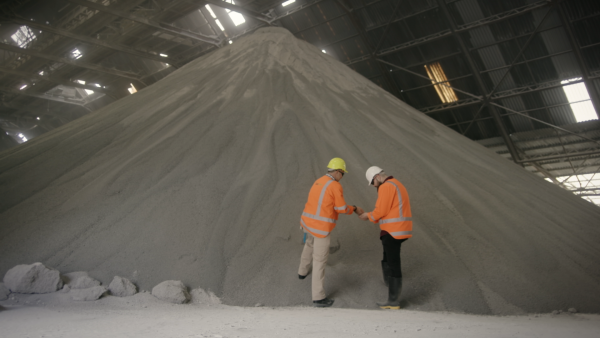 A pile of phosphate fertiliser at the Ballance Agri-Nutrients plant in Tauranga. Credit: Re: News.

Dr Vera Power, chief executive of the New Zealand Fertiliser Association, says nitrogen is vital in the production of food and its introduction as fertiliser allows farmers to produce food that is affordable and nutritious.

“If you removed all fertiliser inputs, food production would halve and prices would likely soar.”

Power says farmers work with experts in the agri-business sector to try and use fertilisers in the most productive way, and with the least environmentally detrimental effect.

A study commissioned by the New Zealand Fertiliser Association found that removing nitrogen fertiliser would equate to a drop in gross revenue of $19.8 billion.

This number only accounts for the loss of one form of productivity.

When investments, jobs, and land-use practices had transitioned, the report concluded “the real economic impact is likely to be significantly less than stated”.

“Fertiliser is one of the largest farm expenses, and so it is very much in a farmer’s best interests to use nitrogen sustainably, responsibly and efficiently.”

Top image: An visualisation of the fertiliser contamination process, with the nutrients leaching through the agricultural soils into the waterways, and the resultant algae bloom. Credit: Re: News.