Re: Journalist Baz Macdonald explores what regenerative farming is, and if it might be the answer to the environmental impact of our dairy industry.

This article is part of Milk and Money, a documentary and article series about the true cost of dairy in Aotearoa. You can watch it now on Re: and TVNZ OnDemand.

That’s how much the average herd of dairy cows produce every day. One herd of 440 cows produces the same amount of pee and poop as nearly 20,000 people.

The way we dairy farm right now creates an imbalance between the concentration of waste being produced and the ability of the land to process it.

What if we could find a way to farm our dairy cows that struck that balance? That is what regenerative farming aims to do. 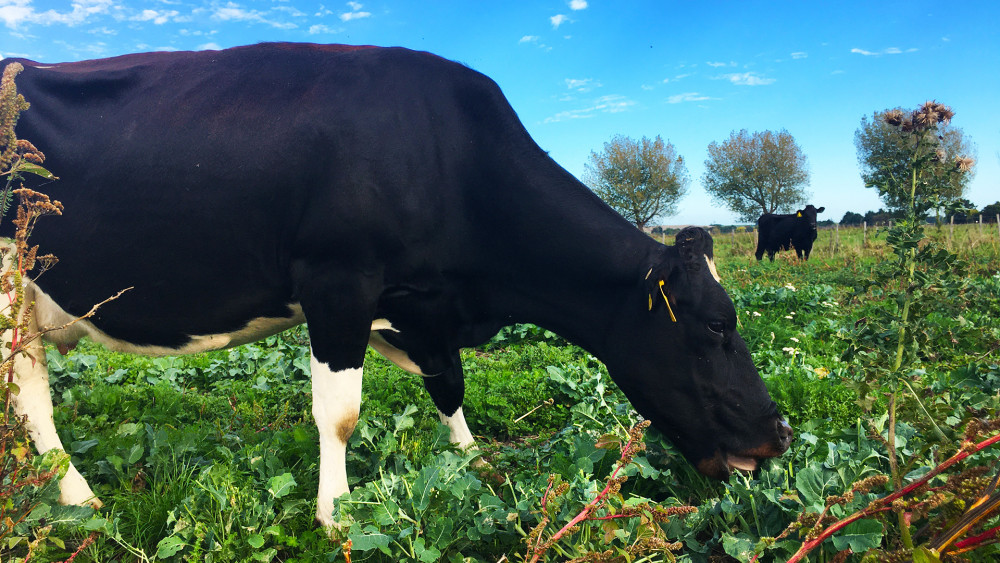 What is regenerative farming and why do we need it?

Right now, the model of dairy farming in New Zealand is intensive - which means we keep more cows than the land could naturally produce enough food for. So, we have to use inputs like fertilisers and irrigation to grow as much grass as quickly as possible.

Over the past thirty years, the industry has doubled the number of dairy cows in New Zealand to 6.3 million. As it did, the industry became the largest water user in the country, and increased its use of nitrogen fertiliser by over 600 percent.

Even with all of that, it can’t grow enough grass to feed all these cows and has become more and more reliant on importing feed from overseas.

New Zealand is now one of the largest importers of Palm Kernel Extract (PKE) in the world, second only to the entire European Union.

PKE is a by-product of palm oil - it’s what remains of the palm fruit after you’ve extracted the oils from it. Like palm oil, PKE has been linked to mass deforestation in Southeast Asia, worsening the climate crisis and leading to the near extinction of many species, including the orangutan.

By keeping more cows than the land can naturally feed, the dairy industry has exceeded the land's ability to process the waste of these animals and the fertilisers we are applying.

And so the environment is deteriorating. Our rivers are buckling under intensive agriculture, with 75 percent of native fish now on the endangered species list.

Our atmosphere is warming, with dairy cows responsible for nearly a quarter of all our emissions - more than all our cars.

And our soils are degrading under the weight of these cows and the overreliance of artificial fertilisers we pump onto them. 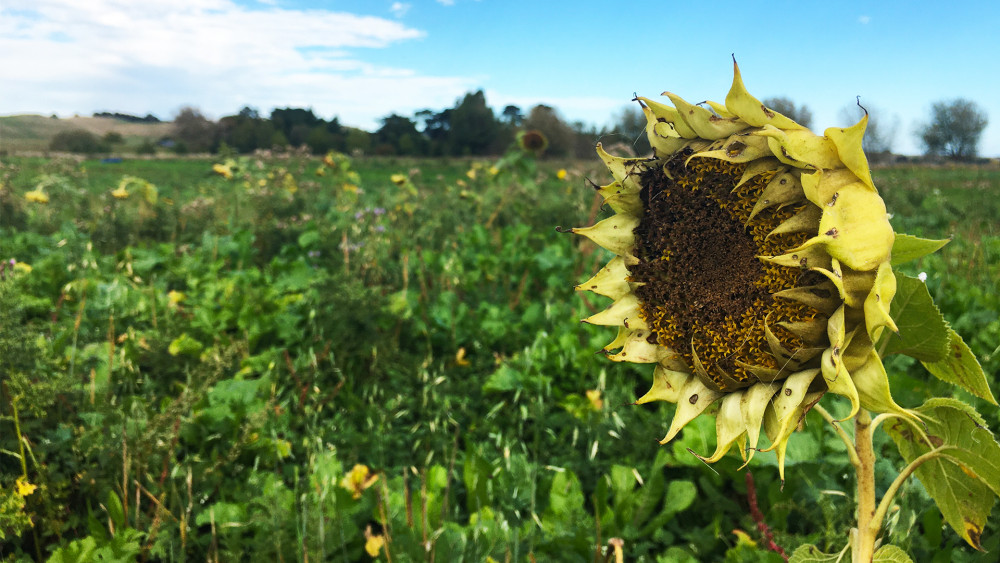 A sunflower growing in a regenerative pasture

At its core, the regenerative approach is about finding balance between the land a farmer has, and what it can naturally support.

This means less fertilisers, no irrigation, no imported feed - just the natural cycles of sun, air, water and soil that have produced life for time eternal.

Regenerative farmers say if this balance is struck, animals actually become part of the natural cycle of the land, instead of overwhelming it. All that poo and pee becomes natural fertiliser, instead of pollution.

The concept has been gaining traction all over the world in recent decades, and there are a growing number of farmers experimenting with ways of working towards a farming system that can exist purely as part of the natural cycles of the land.

They believe this holistic view - seeing our farming as part of a larger living ecosystem - will lead to healthy water, soil and animals. And may also be more economically sustainable for farmers, with more drought resistance, and less money spent on inputs like fertiliser and feed. 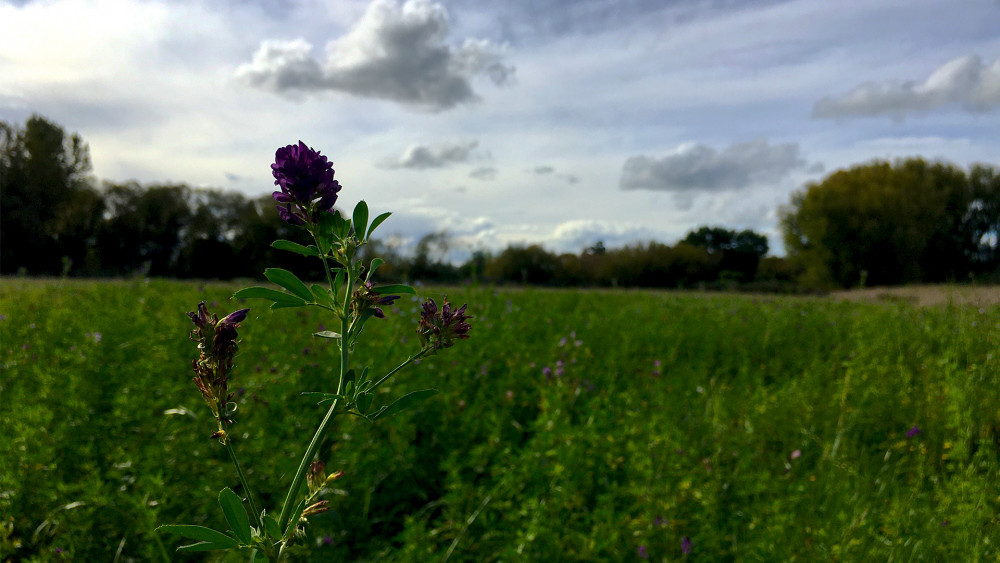 A sprig of lucerne growing in a regenerative pasture. Lucerne is a legume with roots capable of reaching deeper water, adding to a pasture’s drought-resistance.

There are already many New Zealand farmers who have begun the long-term work of finding the natural balance between dairy cows and the land. Creating a balanced system, with the right number of cows, adequate diversity of plants and other animals, and properly developed soils will likely take decades. The majority of New Zealand’s regenerative farmers are less than five years into this long-term process.

One of these farmers is Sam Hogg, an organic and regenerative dairy farmer in Manawatu. He took over his family farm four years ago, and began transitioning it from an intensive farm to the regenerative model - reducing the number of cows they had by a quarter, eliminating synthetic fertilisers and diversifying their paddocks with more seed varieties and vegetable crops. 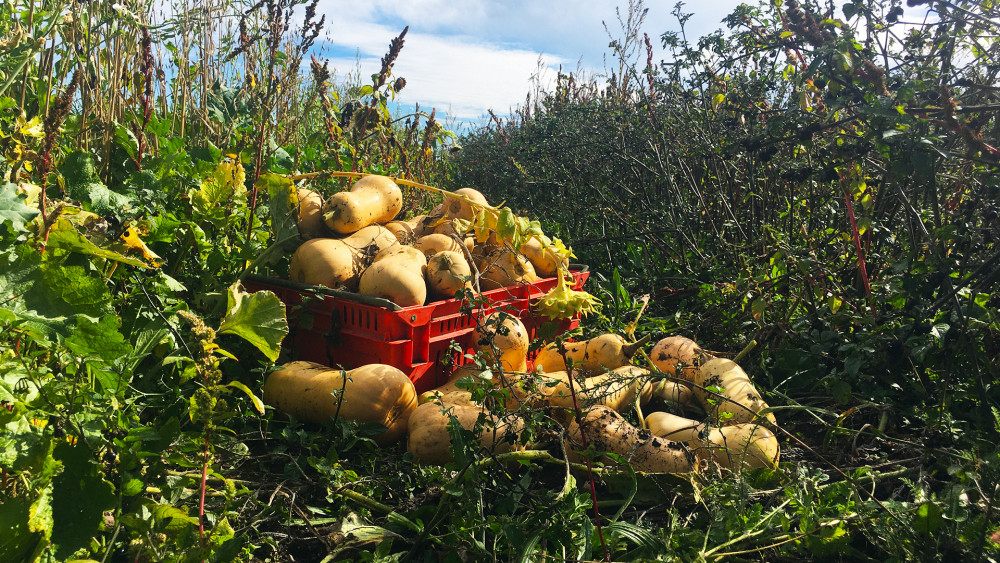 A harvest of squashes from Sam’s regenerative farm.

I visited the farm just after they had finished harvesting the vegetables for the season, and saw the dairy cows grazing on the leftovers.

I was surprised at how different the behaviour of the cows could be based on their diet. After spending a night grazing on a veritable buffet of different plants - broccoli, potatoes, pumpkin - the cows were lively, playful, and a bit cheeky. Rounding them up for morning milking was like trying to pull a toddler away from an icecream sundae - every time you’d get them moving towards the milking shed they’d sneak back. 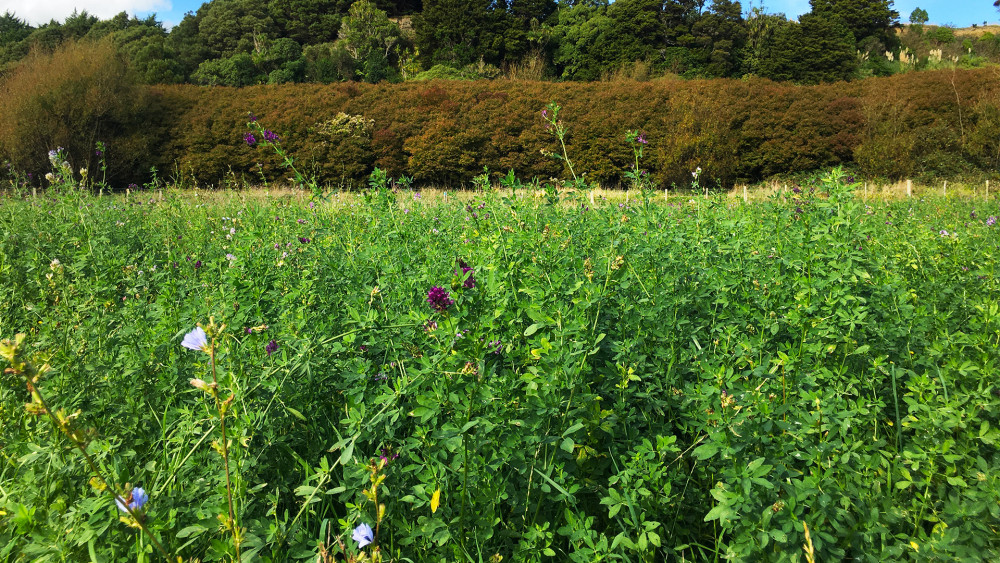 A pasture of diverse plants on Sam’s farm

Sam has also been experimenting with different seed mixes in his paddocks. He pointed out two paddocks that had been producing 30 percent less grass than the rest when relying on fertilisers. Over the last four years he has brought them back to the average by introducing a range of different plants such as chicory, plantain and six different breeds of grass.

“They were bored, lifeless,” Sam says. “We brought them back to par with no other input than diversity.”

I watched the cows making their way to one of these diverse pastures after milking and they were literally running with excitement. Earlier that week I had seen them enter a regular pasture in a very docile way, and so I was stunned by the difference in enthusiasm when they entered this diverse pasture.

The trouble is, the effectiveness and sustainability of regenerative farming in New Zealand is currently totally anecdotal, with little to no scientific testing of the model here.

Prominent New Zealand water ecologist Dr Mike Joy thinks this lack of research is due to the scale of business-funded research in New Zealand. He estimates that for every one hundred dollars spent on research in Aotearoa, 95 of that is funded by business. This has led to good research, he says, but within the very narrow lens that suits the priorities of the agri-business industry.

And regenerative has not been a priority for agri-business - possibly because the model would mean a lower level of production, and less money spent on inputs like fertilisers and feed.

The most common argument the dairy industry makes against the movement is that it is unsustainable because dairy is so extractive. Our cows eat grass to gain nutrients, some of those nutrients are used to maintain the animal, some excreted as waste, and some go into the milk which is then exported overseas.

So they say that because we export milk with nutrients from the land, we need to introduce nutrients (in the form of fertiliser) back into the land.

But regenerative advocates say if soils are allowed to develop more fully than in the current system, they could draw in all the required nutrients from the water, atmosphere and sun alone.

Another common criticism of regenerative farming is the belief that most New Zealand farmers are already implementing regenerative practises. This is partly true.

In the first step towards scientifically validating the claims of the regenerative movement in New Zealand, a National Science Challenge team created a set of 11 principles behind regenerative farming. Some of these principles are already compatible with how we farm.

The chief author of this work, Gwen Grelet from Manaaki Whenua - Landcare Research, said “Our consultation found many areas of strong agreement between advocates and sceptics. It’s time to stop bickering and focus on identifying any true benefits regenerative agriculture might have for New Zealand.”

The diversity of Sam’s pasture is a good example of this compatibility. It is already common practise for farmers to seed paddocks with mixed grasses and legumes. However, farmers like Sam take it a step further with their plant mixes. While a conventional farmer might do a mix of three of four plants, Sam is doing mixes of around 16. It was these kinds of pastures I saw the cows get excited about.

But there are also ways we currently farm that are incompatible with regenerative farming - such as the high use of synthetic fertilisers and the practise of digging up paddocks to reset them. Essentially, all of the practises used to allow more cows than the land could naturally sustain.

As such, some sacrifices need to be made when dairy farmers make the transition to regenerative. Sam needed to reduce the number of cows he had by a third in order to reach a point of equilibrium when synthetic fertilizers and imported supplementary feed were removed.

But while he has had a 30 percent drop in production, he also reduced the running costs of the farm by a third by reducing inputs.

And there are immediate gains in environmental quality from this change.

Take nitrogen, for example. Although nitrogen is responsible for many of the environmental harms dairy creates, it’s important to remember that nitrogen is actually vital for plant growth. The trouble we have with nitrogen in New Zealand is that we apply more synthetic nitrogen fertiliser than the soil can absorb, and so it overflows and becomes pollution  - leading to toxic algae growth in our freshwater and intense emissions in our atmosphere.

Regenerative farmers say that by using these fertilisers, not only are we creating pollution, but also disrupting the ecosystems of the soil - undermining the natural ability of the plants and microorganisms to capture and cycle nitrogen from the air back into the soil. 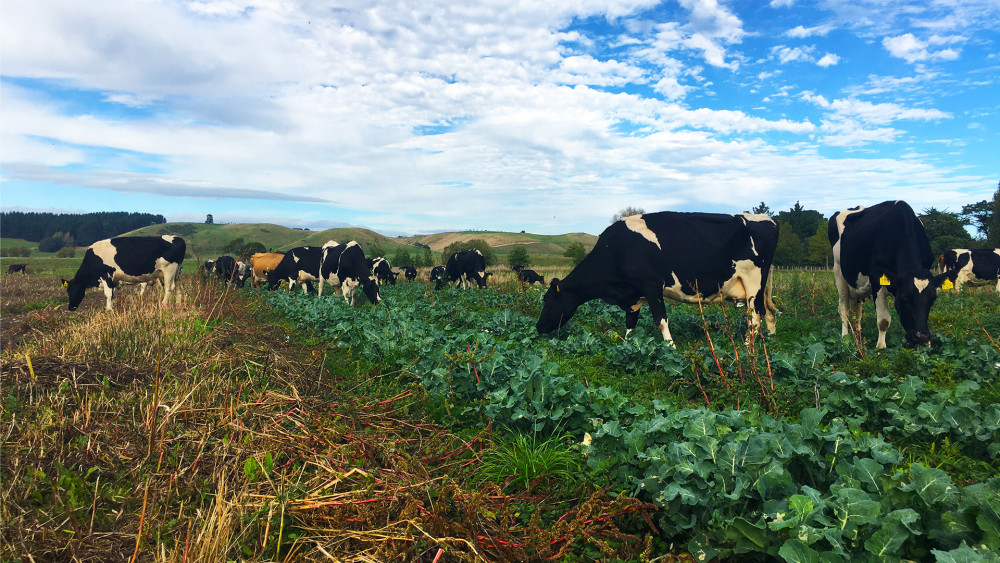 Is regenerative the way forward?

There is a lot we don’t know about regenerative right now. Is it sustainable long term? How high can production go using only well developed soil? How well will it mitigate the environmental impact we see from dairy now?

All of these questions need to be answered scientifically and it looks like that work is finally going to happen.

But even without that data, there are a growing number of farmers around the country who say they are seeing healthier land, water and animals and still running economically viable businesses.

It says something that farmers like Sam and many others are making the shift without this data. To some, even the unknown is more alluring than the impacts of our current way of farming.

What is exciting about regenerative is that it thrives on this unknown. Of the 11 underlying principles of the movement in New Zealand, many are about the mindset - things like ‘question everything’, ‘learn together’, and ‘failure is part of the journey’.

These farmers are rushing headlong into the unknown, armed only with a desire to learn how to be the best, most ethical and sustainable farmers they can be.

That’s a goal I can get behind.

Want to know more about New Zealand’s dairy industry? Our six-part documentary Milk and Money is available to watch now on Re: and TVNZ OnDemand.

Our soil quality has been declining for decades. Dairy is making it worse | Milk and Money | Episode 5 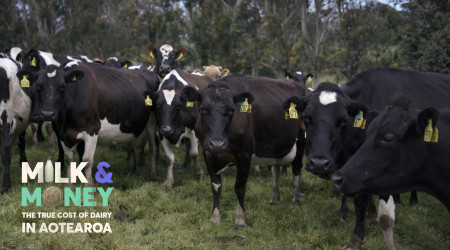