Last weekend journalist Daniel Smith attended the New Zealand Chilli Eating Championship, an event where spice-freaks from around the country converge to put themselves through serious oral and gastrointestinal pain in an attempt to attain the glory of becoming the top chilli eater in the country. There he discovered an unexpected hero: Wei Zhang from Paeroa.

“Expect to see some vomiting,” says Clint Meyer. He’s the bearded brain behind Fire Dragon Chillies, and the madman behind today’s shenanigans, who tells me that today will see the hottest chillies in the event’s 11-year history.

“The Guinness Book of Records says that the hottest chilli in the world is the Carolina Reaper, but that’s bull,” he says. “We are going to get way hotter than the Reaper today. We got ghost peppers, seven-pop primos, big black mamas, dragon’s brains and a whole range of bhutahs.” 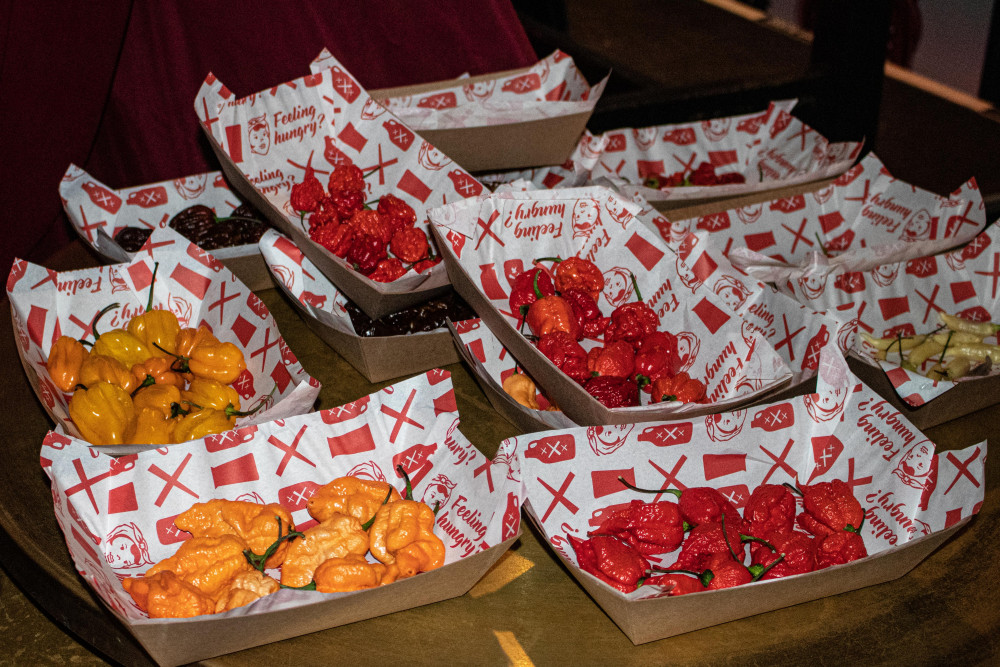 A range of chillies, soon to be eaten.

The heat of the chillies are measured using the Scoville scale, a system created to put perspective on the insane levels of spice pain that are hard to quantify without screaming.

The Scoville scale measures the amount of capsaicin in a pepper. Capsaicin is what makes your body sweat, head pulsate and mouth catch aflame after eating a chilli. Scoville Heat Units (SHU) are the number of times an extract of capsaicin needs to be diluted with sugar water before humans can no longer taste the heat.

An average jalapeño rates around 2500 SHU, which means the capsaicin needs to be diluted 2500 times until the heat is no longer detectable.

But jalapeños are child’s play. Before the night is out contestants will be chomping through chillies with two million SHU, the rating of a steady shot of pepper spray to the mouth.

The 2020 champion, a Christchurch metalhead with a chiselled mohawk named Jesse Painter, is confident about his chances of victory. “I have eaten a lot of chillies over the past few weeks. But the real test is not in the mouth but in the gut. The gut has got to last.”

As Painter says this his eyes flash in wild excitement. He seems like a boxer about to get into the ring with someone far above his weight class. He knows he is going to get the shit beaten out of him, but he also knows the adrenaline rush that comes with receiving a punch to the face. 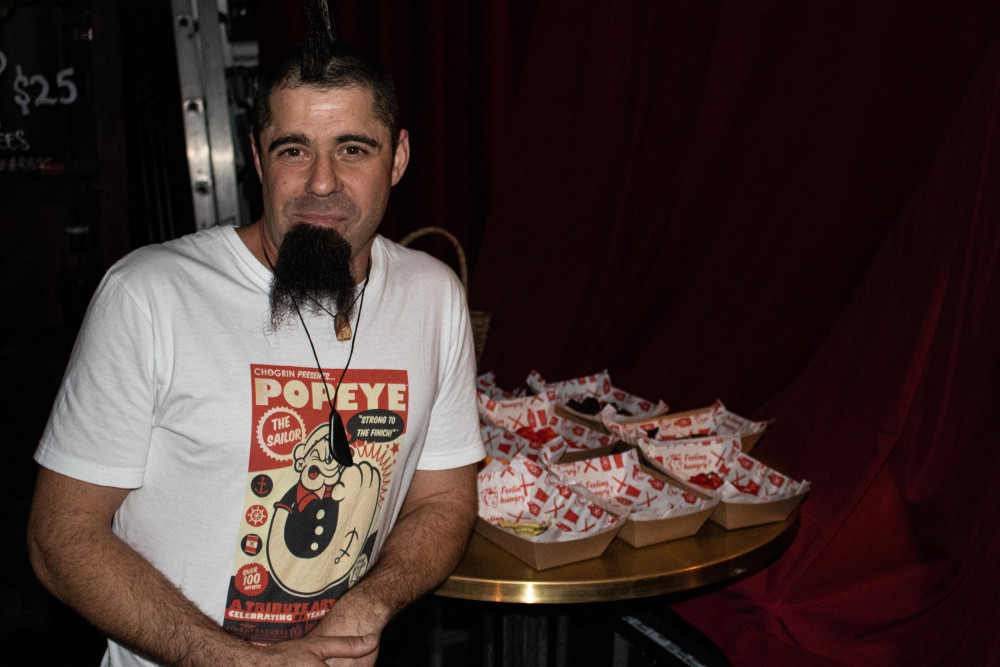 Jesse Painter is confident about his chances of victory.

2015 and 2016 champion Josh Shotter, a man as squat and strong as a chilli himself, is also fizzing to begin. “You start chewing on these things and they completely throw your senses out. It affects your vision, your hearing starts throbbing, you get hot flushes running up and down your body.”

Both Shotter and Painter are the same demographic as almost all of the competitors at the finals table: swaggering males approaching the event to attain bragging rights.

That is, all but one. Wei Zhang is a woman hailing from Paeroa by way of China’s Jiang Xi province, whose people are renowned for loving spicy food.

Amongst all of the shouting, jostling and spilt beer, it is easy to miss Wei. She stands in a corner, speaking quietly to another contestant. Until she took her seat with the rest of the hulking male contestants, it had not crossed my mind that she might be a competitor. 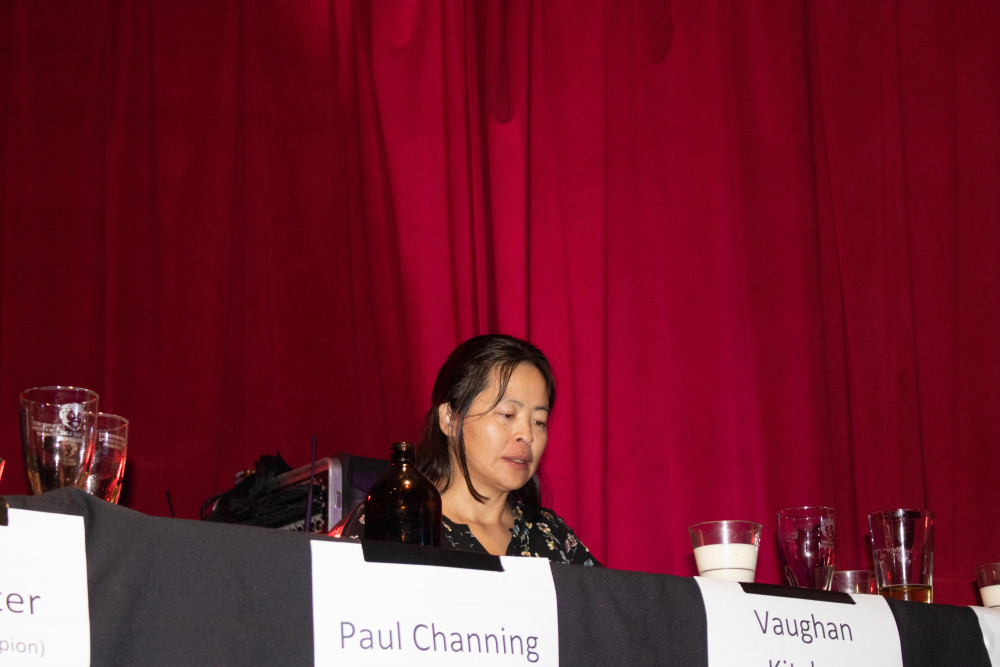 As the 12 contestants sign health and safety waivers, Clint goes over the rules. “You get a chilli, you have to chew on it for at least 30 seconds. After that, you open your mouth and I will make sure it is still there before you swallow. If you throw up you are out. If you take a drink you are out...”

And then the pain begins. Clint eases the contestants in with chillies up to 100,000 SHU. The challenge in these early stages seems mainly dealing with the inane questions from the MC, The Rock FM’s Roger Farrelly.

As the chillies pass the 100,000 mark we start to see some serious pain. Eyes go wide, tongues lose dexterity. Between chillies most contestants keep their mouths shut for fear of throwing up.

Apart from Wei, who has revealed that her purpose for being here is to promote her town of Paeroa.

“Paeroa has the best fish and chips in New Zealand! We have beautiful parks, amazing scenery, and wonderful people! Come visit Paeroa, you won’t regret it.”

As Wei is speaking she is also eating her chillies in a way far from the wincing chomp of the other contestants. Wei chews daintily, biting off a section at a time. Unlike the men who treat the chillies like bad medicine, Wei savours them, enjoying every bite. 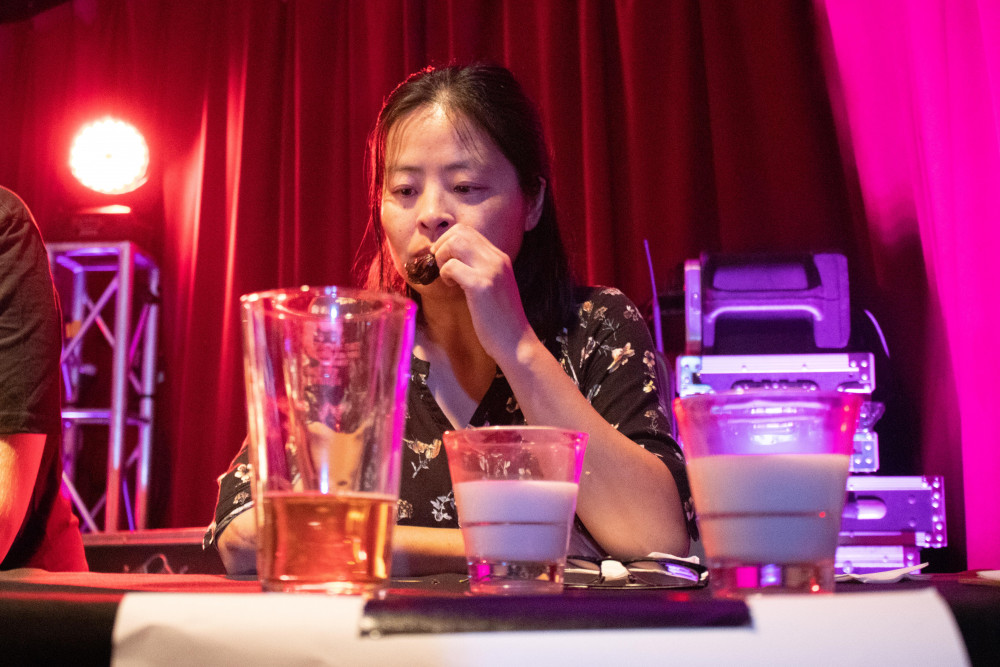 The heat levels break the one million mark with the introduction of ghost peppers. Although no one at this point has yet dropped out, it becomes clear that several of the contestants are way out of their element.

A man named Jimbo begins to shake uncontrollably. His face has been red since the second chilli and is beginning to push through shades of purple.

Another man having trouble is Sam Thompson from Rarotonga. Since the first chilli hit his lips he has remained a statue of anguish. He stands upright, his fists clenched at his sides. His eyes are wide and unblinking and his mind has astral-projected to a place far from here. Roger Farrelly asks him how he is doing and he replies in a quiet controlled voice, “God is good.” 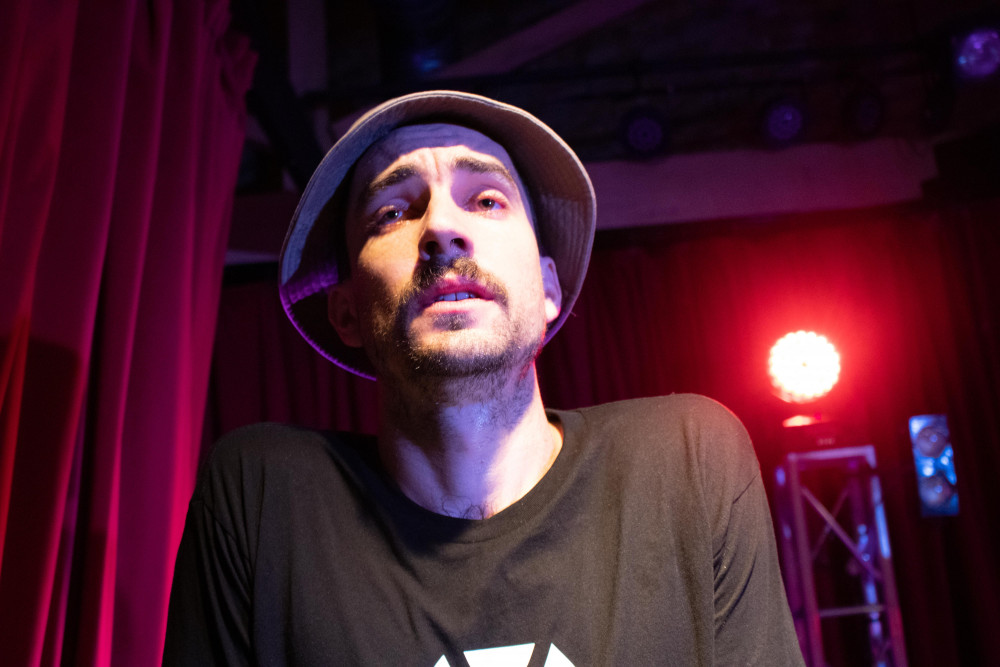 Sam Thompson trying to astral-project himself to a place far away from the chillies.

Jesse Painter has barely broken a sweat. He looks across to some of the red-faced newcomers and shakes his head. They won’t last the distance.

A punk from Chicago is the first to go as the chillies push past 1.2 million SHU. Then like dominoes, many crumble in his wake. One man begins vomiting into the buckets provided.

As the smell of chilli-barf drifts out over the room, Jimbo can no longer hold on. He crumples like he has been punched in the gut and pukes. 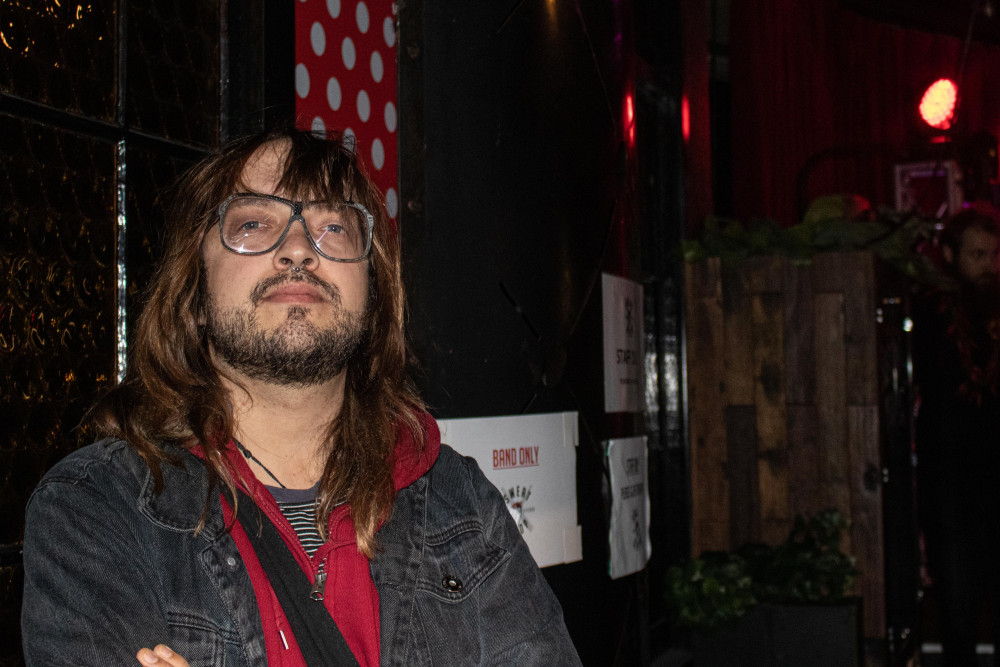 Chicago punker Brent is the first to bow out.

The crowd wildly applauds his effort. The appropriately-named Sweat Shop Brew Kitchen, where the event is being held, is packed to the gills with punters screaming with support for the chilli-eaters. The room has the feeling of olde-timey days when the only entertainments were liquor and strangers hurting themselves, often both. Together we are a squashed mess of hundreds of people, cheering, wincing and grimacing as excitement and drunkenness pass like an electric current through the audience. 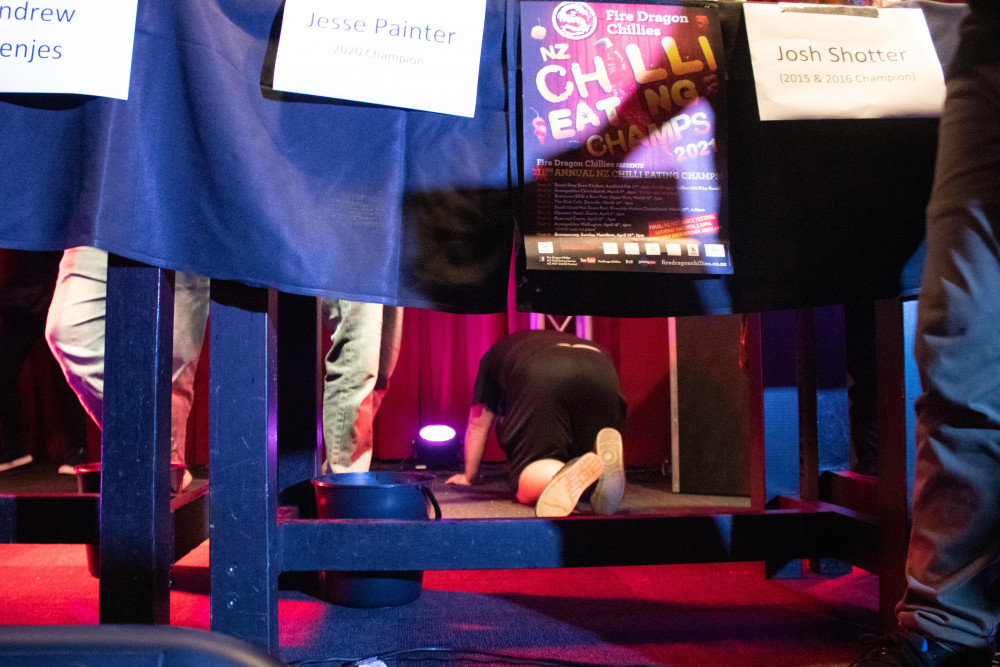 Josh Shotter vomits into his bucket.

When the chillies pass the 1.6 million SHU mark there is a surprise upset when two-time champ Josh Shotter collapses vomiting into his bucket. A consummate pro, he at least has the decency to turn his bucket from the crowd, protecting them from splashbacks. After seeing a two-time champ unable to handle the heat a whole series of contestants fall away, leaving only four left standing at the table.

Clint raises an ugly brown chilli that looks like a polished turd. This is the 2 million mark. The chilli has the same heat hit as a can of pepper spray. Clint explains that after eating this chilli some people report hallucinations and travelling to different dimensions.

As the final four chew through it, their hot breath drifts across the crowd. It smells less like chilli than a corrosive chemical that can burn through steel.

Incredibly they make it through. Clint seems a bit pissed at this display of endurance. To try and get a winner Clint pulls out the dragon’s brains, which he says is the hottest chilli known to man. To speed things up, Clint asks the contestants to eat two at once. The fourth contestant vomits his guts and we reach the final three; Jesse Painter, Sam Thompson and Wei Zhang.

Backstage Clint is wild-eyed and scrambling. In a display of madness, he brings out a four-chilli-kebab, which he calls the most brutal lineup the competition has ever seen.

In an attempt for the pain to be over, Sam Thompson scoffs the four chillies in about five seconds. This proves too much for his stomach to bear and he vomits a foul red substance onto the table.

Jesse puts his mohawked head down on the table. He does not look well. His eyes are bloodshot and his body shakes with every moment. Beneath the table, his legs are crossed and his knees bob rapidly up and down like a man trying to hold in diarrhoea. 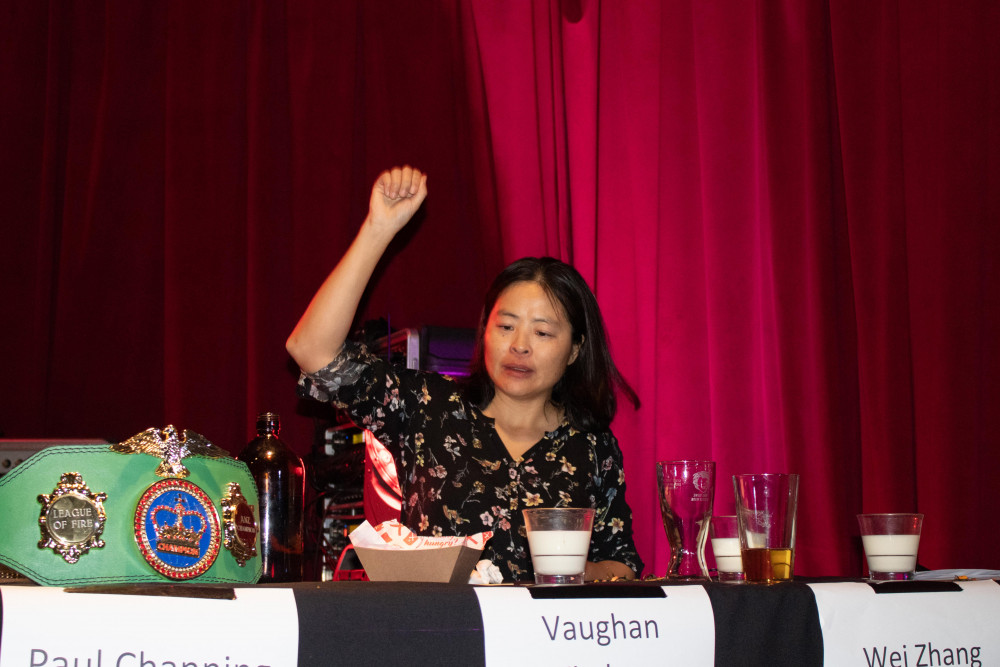 Wei takes this opportunity to dance to the music of Black Sabbath playing over the bar speakers, which raises cheers from the crowd who chant, “WEI! WEI! WEI!”  She still has the energy to promote Paeroa.

“I forgot to tell you all about the Paeroa Guy Fawkes display. It is one of the best displays of fireworks in the whole of New Zealand. We collect donations at the event to buy stationery for the local primary school. You should all come along!”

The crowd cheers at her every word, while Jesse Painter looks on trying not to vomit. 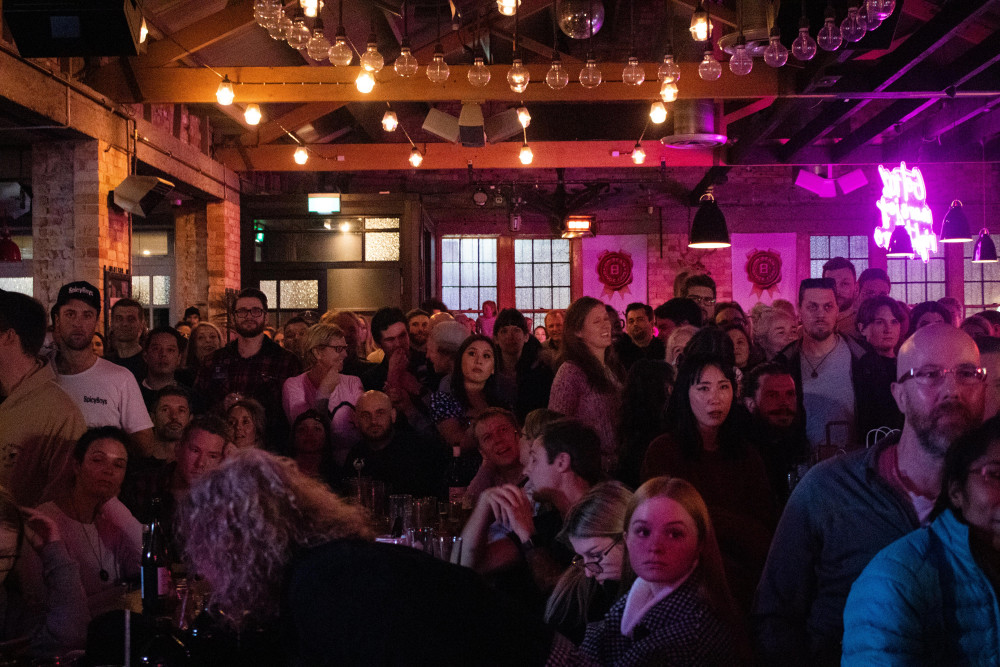 The crowd cheers on the contestants.

Against all thought to medical safety, Clint brings out a tray with seven chillies. He tells the crowd nervously that this is furthest the competition has ever gone before.

Pushing through the chillies, Wei cries tears of pain but does not stop chewing. Jesse looks completely out of it, barely hanging on by a thread.

The feeling in the crowd has changed to heightened anxiety. It has been three hours, and the two people left standing on the stage have polished off 40 of the hottest chillies known to man. 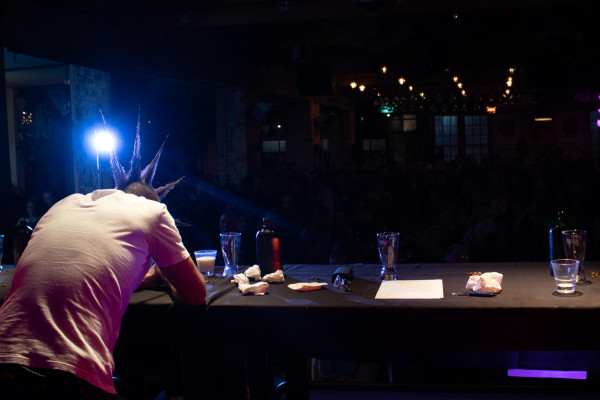 Jesse has his head down again. His mohawk bobs as he bangs his forehead against the table. Suddenly his wife calls to him from the crowd and his mohawk raises up. His wife is holding their baby up to his face. Jesse’s eyes soften as he remembers who he is doing this for.

Clint nervously brings up a tray with an unprecedented 10 chillies. The crowd falls into hushed silence. Fifty chillies seems far too many for a human to consume.

Thinking the same thing, Wei raises her glass of milk and takes a sip. With grace and dignity, she valiantly concedes.

With great difficulty, Jesse Painter raises his hands above his mohawk. He has retained the Oceania chilli eating title belt, and won $500. 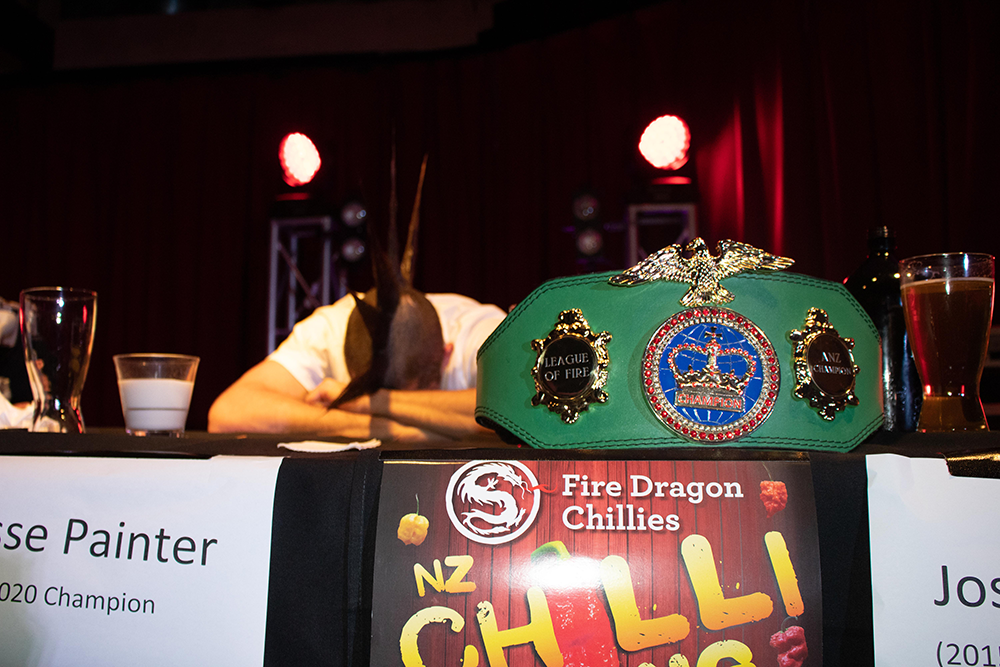 When I call Wei a few days later she explains her reasons for tapping out. “At that stage, I thought that if I ate another ten chillies I probably would throw up and I didn’t really want to throw up in front of so many people,” she laughs.

“I thought I did a lot better than I expected. When I started I didn’t want to be the first person to drop out, so I am quite happy with what I have achieved.”

But Wei still sticks to her reasons for entering the competition in the first place.

“What I want to say is I would love to see more people come and visit Paeroa. The town is beautiful, but it needs a lot of external visitors to help the locals after Covid has impacted our businesses.”

Jesse Painter won the Oceania title belt, but Wei Zhang won our hearts and minds. She had the courage and the bravery to put herself through immense pain, not for a shot at glory, or for bragging rights, but for the simple beautiful goal of promoting the town that she loves.

Maybe a good idea for the Paeroa tourism board to attract more visitors would be to get rid of the giant L&P bottle and put in its place a statue of local hero, chilli-eating extraordinaire, Wei Zhang.

These children are racing speed cars at 182kmh 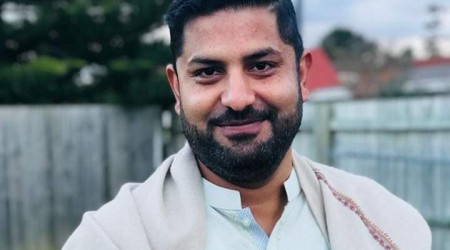 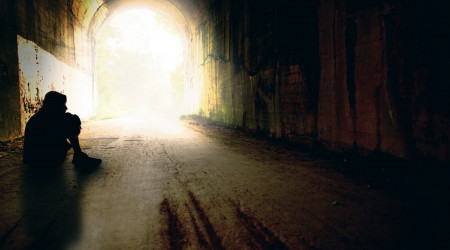