By Daniel Smith and Josh Robertson

Every year, kids aged 7 to 14 gather to race drag cars against each other at speeds of up to 182 kmh at the Junior Dragster Championship.  Writer Daniel Smith and photographer Josh Robertson headed to the Meremere Dragway to learn more.

The Meremere Dragway sits proudly at the centre of a large flat paddock just south of the Pōkeno meatworks off of state highway one, about 45 minutes from Auckland.

The car park is full of muscle cars, which I thread nervously between in my two-door 2001 Ford Focus.

I was there to cover the Junior Dragster Championship, a race in which children, some as young as seven years old, clamber into strange, high-powered vehicles and race each other at high speeds. 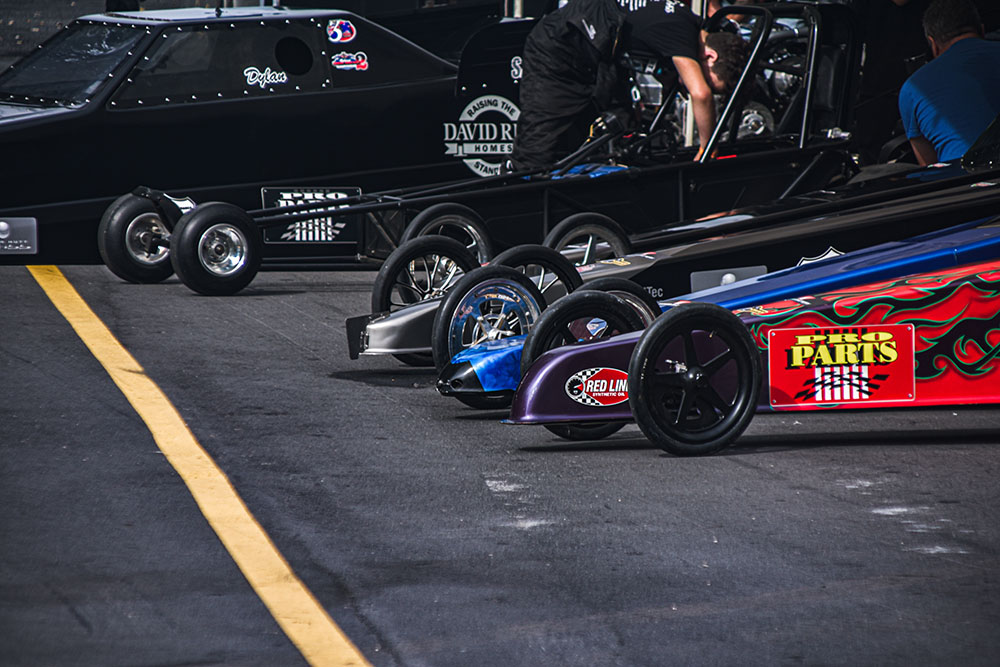 A junior dragster is a smaller scaled-down version of a top fuel dragster, which is the fastest type of car used for drag racing. Drag racing is a type of motor racing where vehicles, normally either drag cars or motorcycles, drive down a short, straight course, competing two at a time to be the first to cross a set finish line. Junior dragster cars were developed in New Zealand in 1988, and were quickly adopted across the racing world.

The organisers of today’s event, Kathy and Natalie, are sitting in the shade of huge steel bleachers helping a steady stream of children sign in for the race. Most of the kids seem well under ten years old. All of them have serious looks on their faces. This is not a line to the dodgems at Rainbow’s End. This is an event in which their mettle is to be tested, with potential glory for a lucky few. 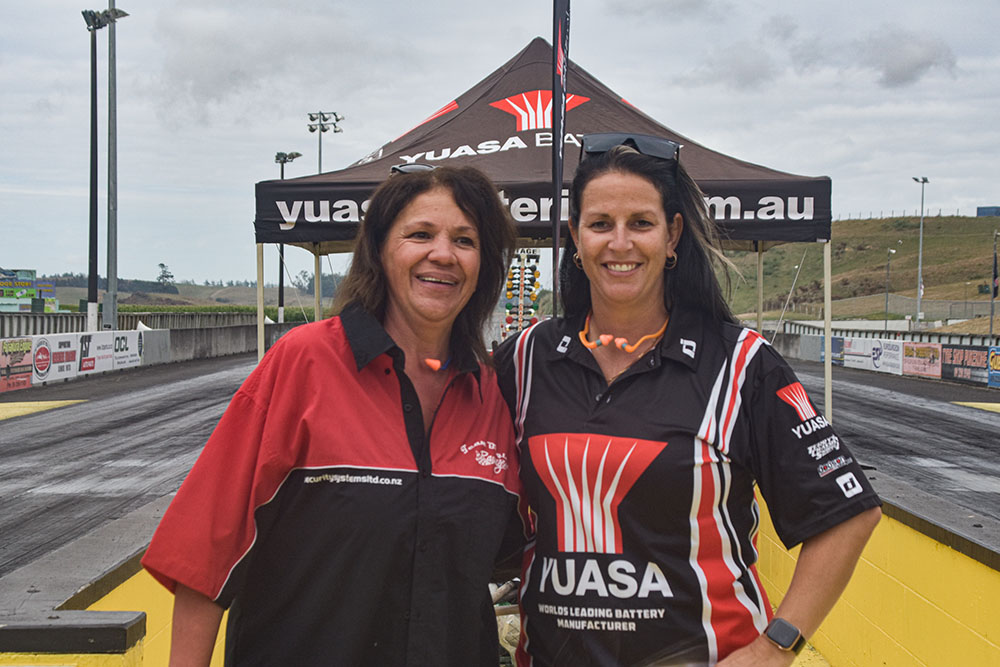 When I mention that this is my first drag race, Kathy proceeds to give me a friendly, if confounding, rundown of the ins and outs of the sport.

“The best way to describe it is that racers are broken up into three different groups per their age. They may run only in their delegated times. The youngest group run to 11.90, the middle group to 8.90 and the older to 7.90. It’s very confusing.”

Yes it is, but here is a brief layman’s translation. The age divisions determine the maximum speed at which competitors can race. The 7-10 age group can finish the course at a minimum time of 11.9 seconds, which if my calculations are correct, is a top speed of roughly 182 kmh. If a racer crosses the finish line any faster they are disqualified.

The older the child, the quicker the time, the faster the speed. The 12-17 year old age group can run a 7.9 second quarter mile with a top speed of a gut-busting 273 kmh.

Complicating this is the fact drivers are not just driving down a track, they are racing a competitor. The drivers need to make sure they don’t complete the course faster than their minimum time, while at the same time making sure they drive faster than the kid on the other side of the track. It is a complicated game of motorised cat and mouse which is all over in about ten seconds.

When I was twelve years old, I thought myself a badass for getting my teeth knocked out playing soccer. But here was a sport in which kids raced small metal cars at 180kmh. Was it dangerous?

In February 2021, a man making a solo qualifying pass for the adult motorcycle drag race died from injuries sustained at the Meremere Dragway. This was the first death in the track’s 45-year-history,

But Natalie assures me that “as much as it might look like a dangerous sport, it is actually one of the safest sports your child could get into. You have all these safety protocols that the children have to abide by otherwise they can’t race. You wouldn’t want your child to be racing if they didn’t have all of the safety gear.”

To step into a Junior Dragster a kid needs to be wearing a helmet, strapped to their vehicle via a five-point harness, a hanes device (a kind of neck brace that prevents whiplash), and arm restraints to prevent any wayward limbs flying out of the vehicle in the case that the dragster rolls. Children driving methanol engines also need to be wearing a fireproof race suit. As Natalie says, “if the kids are all strapped in properly there shouldn’t be anything that could go wrong. You are safe as houses really.”

As Natalie is giving me the safety rundown we walk out onto the track. The deep black pavement of the quarter-mile stretch of track is so smoothed over from thousands of tires it looks like handmade pottery. At this moment a ute with brooms and buckets sticking out of the back and the on-site paramedic vehicle are dragging down the quarter mile. The ute wins. Twice. 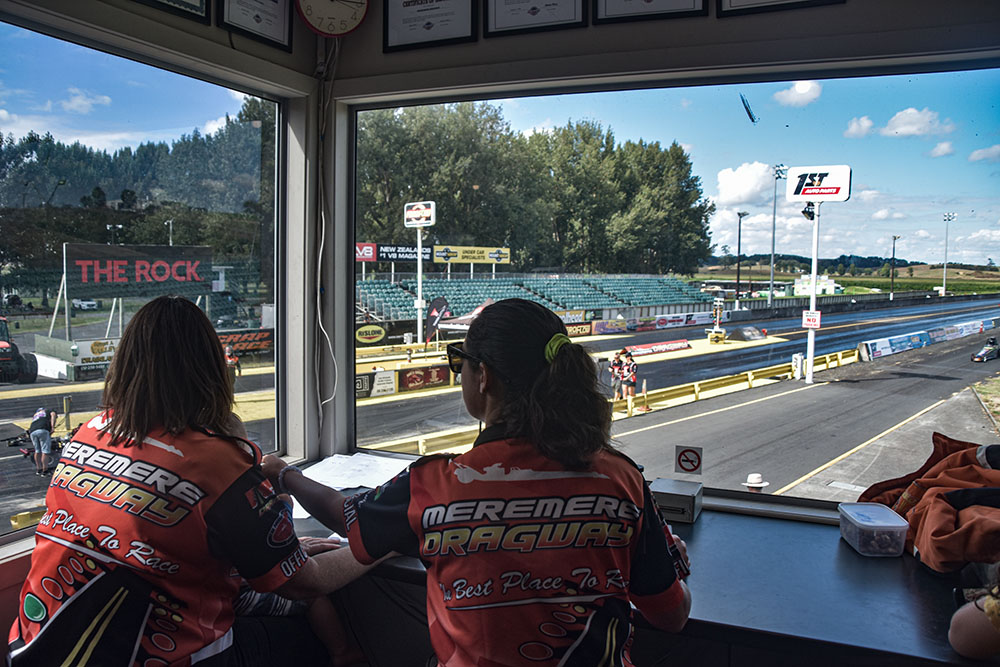 Natalie introduces me to her son Carlos Harvey. Carlos is nine years old but seems to have been working on his pre-race game face since birth. When I ask him how fast his car goes Carlos corrects me - they are not cars, they are called “junior dragsters”.

“Are they dangerous?” I ask.

Carlos shrugs, “They are if you don’t know what you are doing.”

The lack of fear on this nine year old’s face reveals that Carlos certainly knows what he is doing. 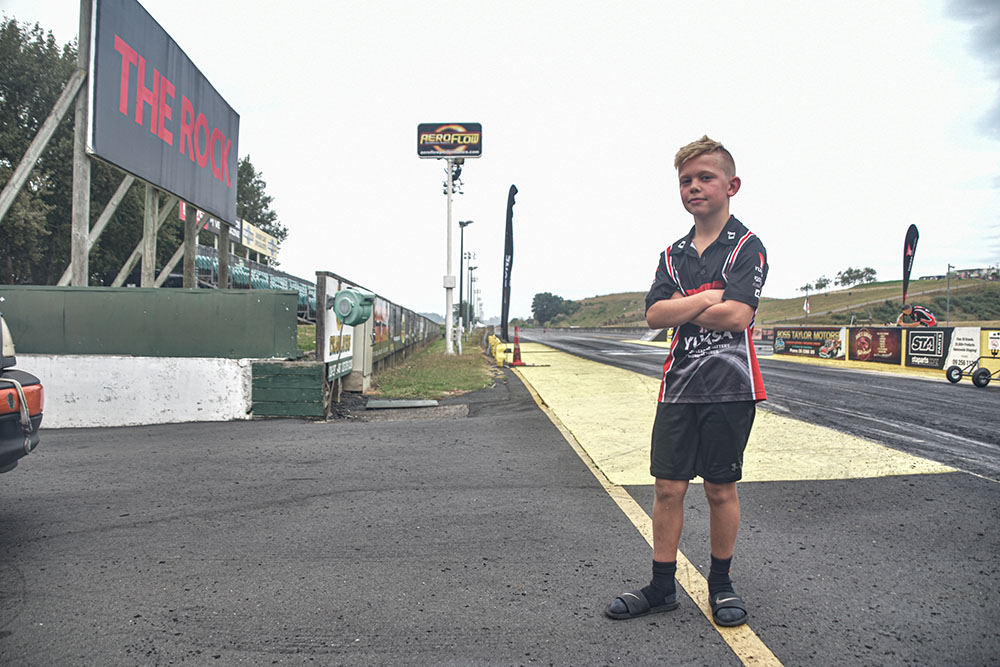 Another person I met pre-race was fourteen year old Sophie Bingley. She has been racing for four years. “What I love about it is just the adrenaline rush when you are going down the track, feeling the G-force push you back in the seat.”

I ask Sophie what people need to understand about drag racing. Sophie says, “I guess it seems like whoever is fastest wins, but there is a lot of thinking behind it. Getting combinations right, gearing right, working out how fast you need to go. There is a lot of complicated stuff behind what seems to be a car just going down the track.” 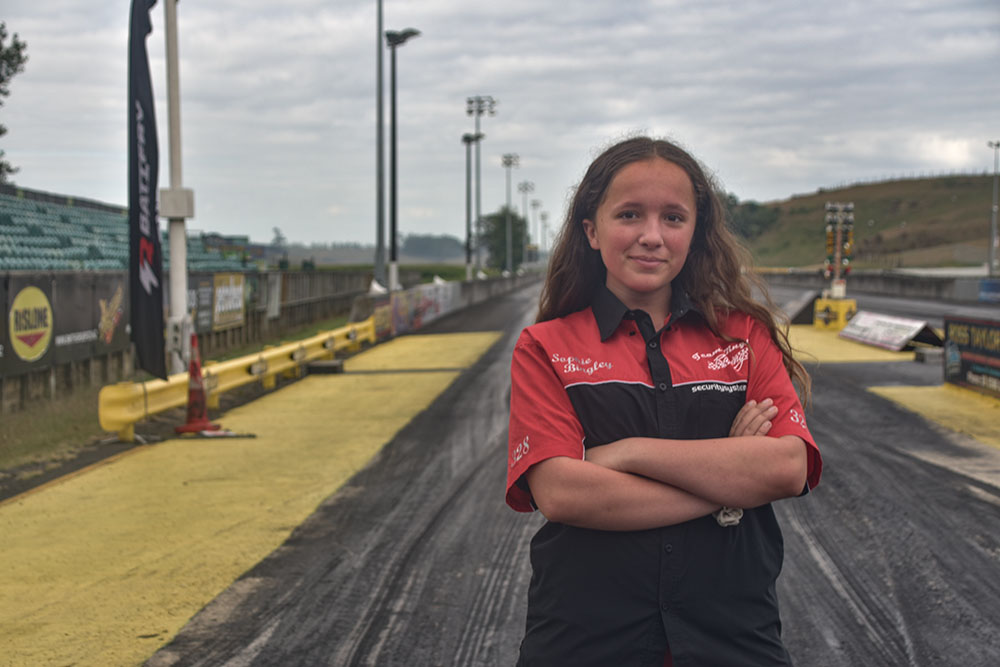 After meeting Sophie and Carlos, I finally got a close look at a junior dragster. They are a long-nosed vehicle with two front tires whose high safety spec doesn’t change the fact that they look like the back end of a toddler’s tricycle. The rear wheels are large and worn down flat. Above the rear wheels is the engine, a big hunk of metal that seems set to overbalance the vehicle at any moment. When idling the machine growls like a caged beast.

Many of the dragsters are decked out with flame decals. Some are bestowed with names like Nitro Fish, The Bandit, The Heartstopper Kid, Road Runner, and Can’t Touch This, but many are named only by the small businesses that sponsor their upkeep. 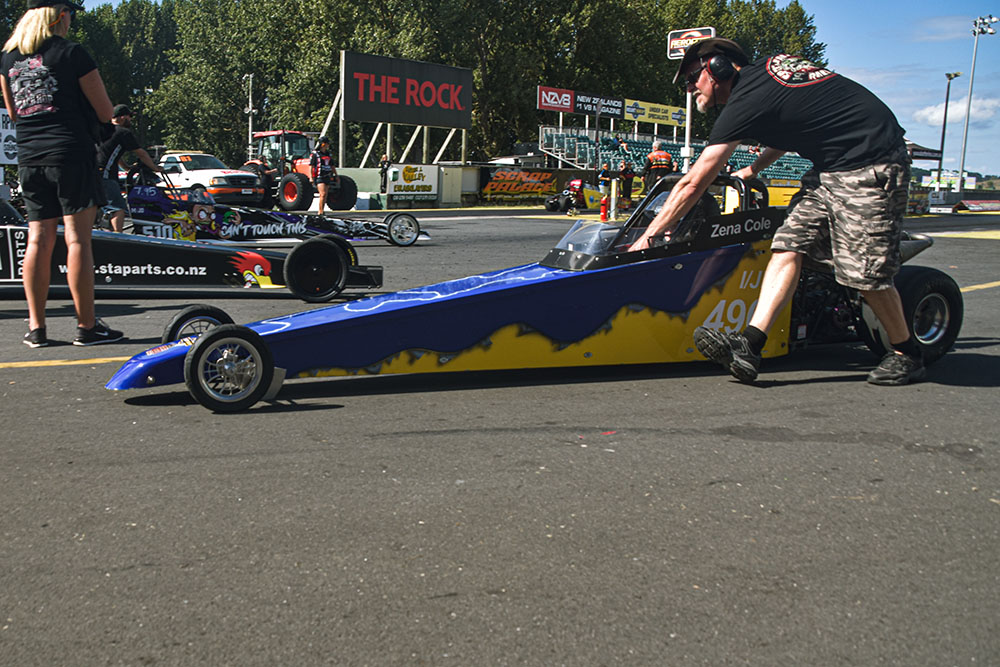 As they line up in twos behind the starting line, the dragsters look more like alien vehicles more suited to deep ocean dives or burrowing to the centres of giant sand dunes than driving on flat surfaces. 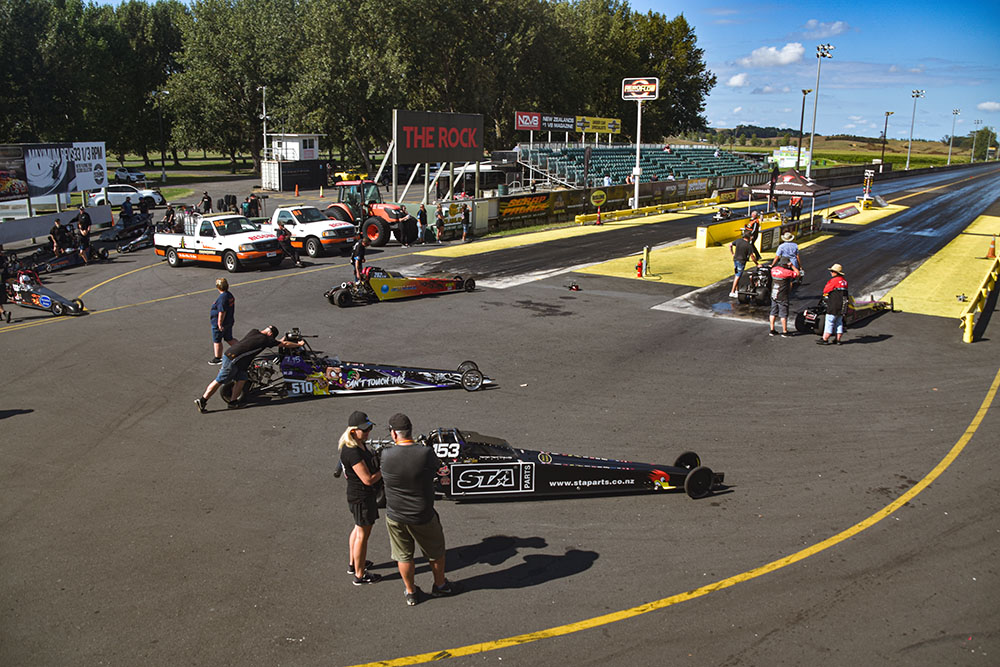 Then suddenly the lights turn green and the racing begins. It starts like a biblical storm, all at once and with a thunderclap that rocks the heavens. The noise is insane. I expected it to be loud but this is something else. The engine punches, whines and roars all at once, a three-pronged assault on your inner ear.

Like a chump I have to block my ears with my fingers. I look around and everyone within half a kilometer of the track has some sort of earmuffs. A crucial journalistic oversight.

Behind the startline, racers-in-waiting line up in the hot sun. A lucky few kids have their parents standing over the top of them with umbrellas for shade, the rest of them have to sit withering in the nervous heat in their hot metal vehicles.

Carlos’s car has a decal of the grim reaper gripping a steering wheel with a ghoulish grin, the words GAME OVER written across the reaper's knuckles. When the lights go green his dragster rips along the track with a squeal, disappearing into the middle distance, leaving his unfortunate competitor in the dust. 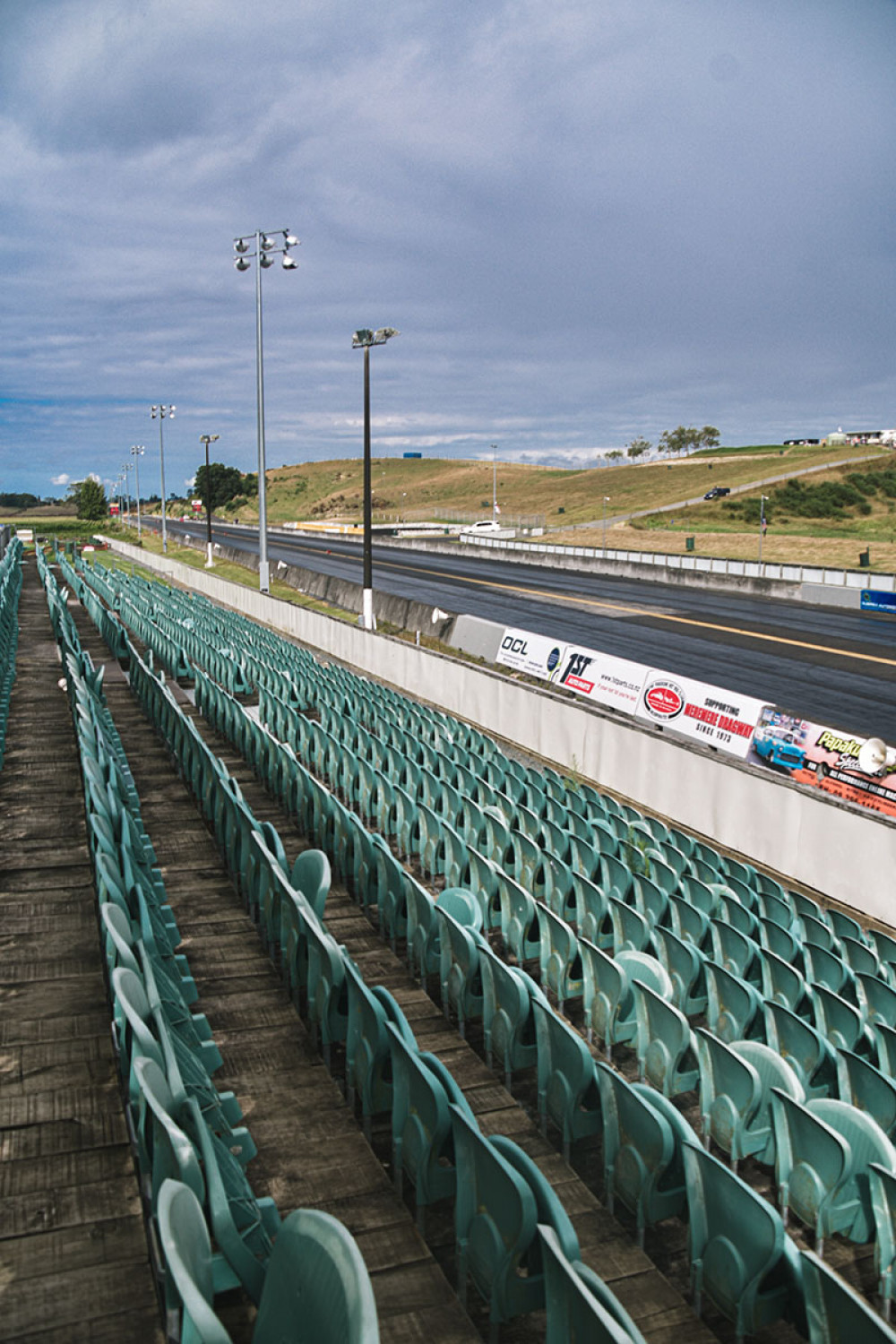 Behind the bleachers at a makeshift pit stop beneath a gazebo, Carlos rolls in. His dad Rod crouches down, spraying a can of something into the nether regions of the dragster’s engine block. Carlos’s face is a little flushed from the race but he is happy to tell me that he “ran a pretty consistent time.”

Rod turns away from the engine block to tell me that Carlos’s time is “more than consistent. He ran 11.99. The minimum for his age group is 11.9. That’s cutting it about as close as you are going to see today.” 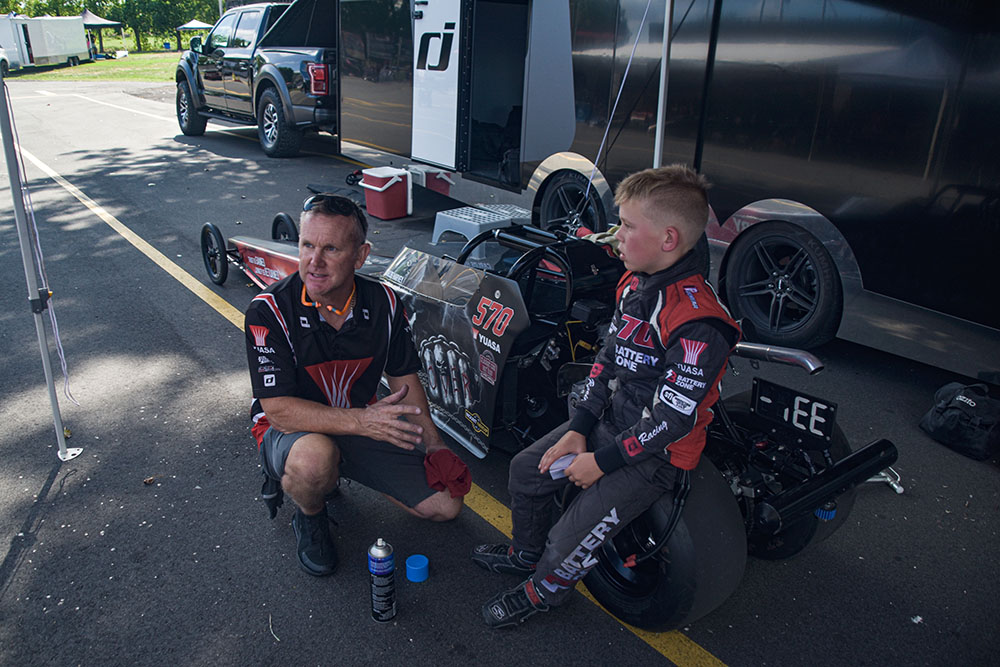 Carlos shows me his race receipt to prove his time. He’s not showing off, just making sure this bumbling journalist who can’t tell a Junior Dragster from a sedan is getting his facts straight.

I try to keep interviewing Carlos, asking how he feels (“happy”), if he is going to win (“yes”) and a whole lot of other inane questions that this nine-year-old racer has no time for. Rod and Carlos have a lot of work to do to keep the dragster ticking over all day and there is a lot of racing left.

I say my goodbyes and wish Carlos luck.  He gives me a serious nod.

But this nine-year-old has been racing high-powered vehicles since he was seven, has a licence to reach speeds that my two-door Ford Focus could never dream of, and his game face is on.

Carlos Harvey does not need my luck.

Every girl should know how to change a tyre