You could be forgiven for thinking the theme for this year’s Splore Festival was ‘Wear a Rain Poncho, But Make it Sexy’.

But it was actually ‘Infinity’, and when the rain subsided, an eclectic mix of lights, colour, glitter and all things weird and wonderful came to the party.

Splore is an annual festival held at Tapapakanga Regional Park in Orere Point, Auckland. Over the last few years it has encouraged people to be considerate of the environment and other cultures, introducing a ‘Switched On Style Guide’.

They advise punters to buy second hand, make their own costumes, or swap, borrow and use what they already had. They also make it clear that culture is not a costume, and that it’s not appropriate to play dress-ups with other people's heritage.

It’s paid off. Only a small percentage of the people we saw at Splore this year didn’t get the memo - with most people opting for opshop beauties and handmade masterpieces. Here’s a gallery of some of our favourite looks. 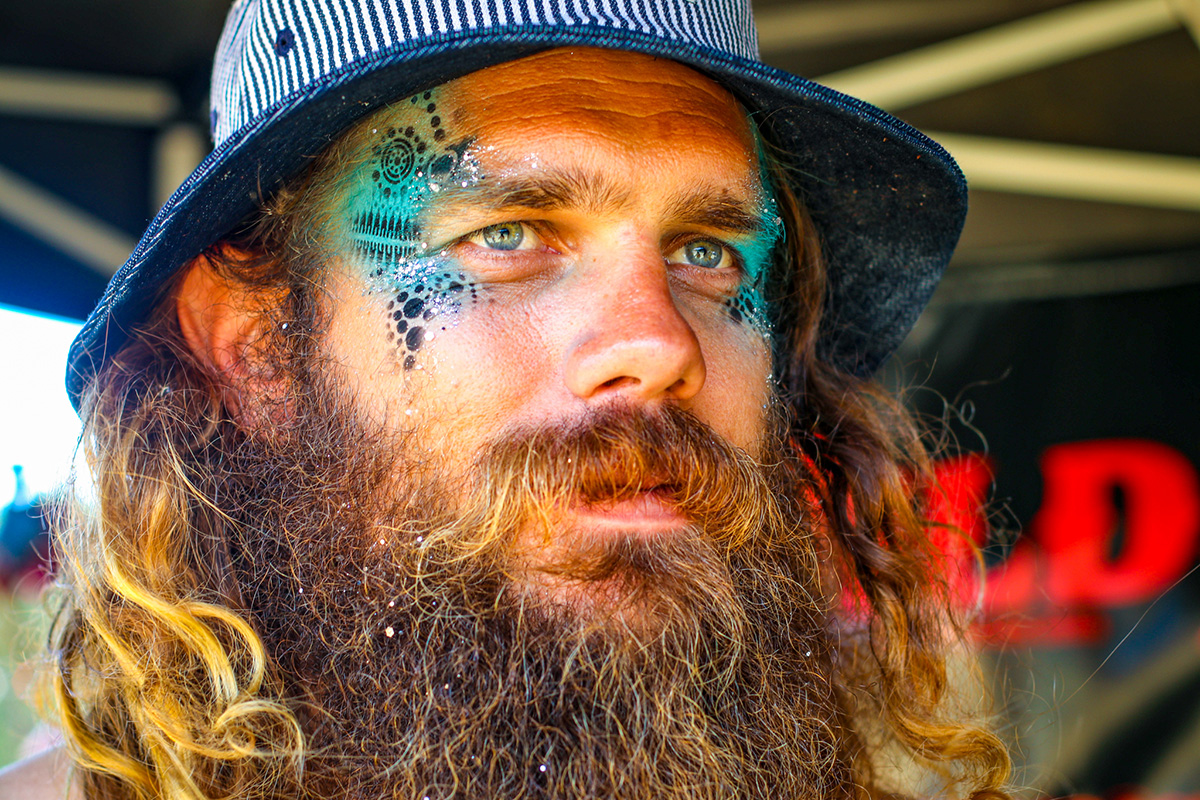 “I think there’s nothing worse than people getting offended by what you’re wearing. I’m huge on sustainability – the cheap stuff takes away from your handcrafters who work hard to make good quality, sustainable products.” 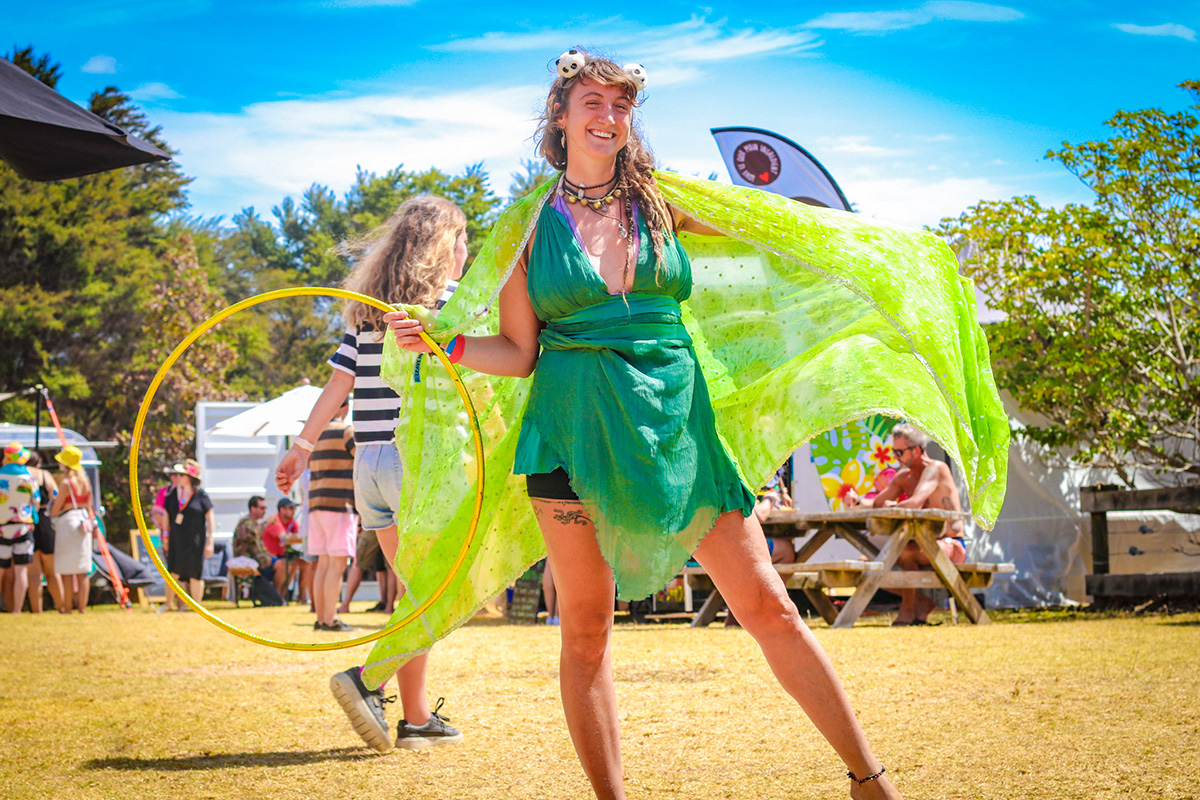 “This cape was from an opshop on Waiheke (I live there) and this dress is borrowed from a girl I’m camping with here. I try to buy everything from opshops and if I can’t find it in an opshop, I don’t get it.” 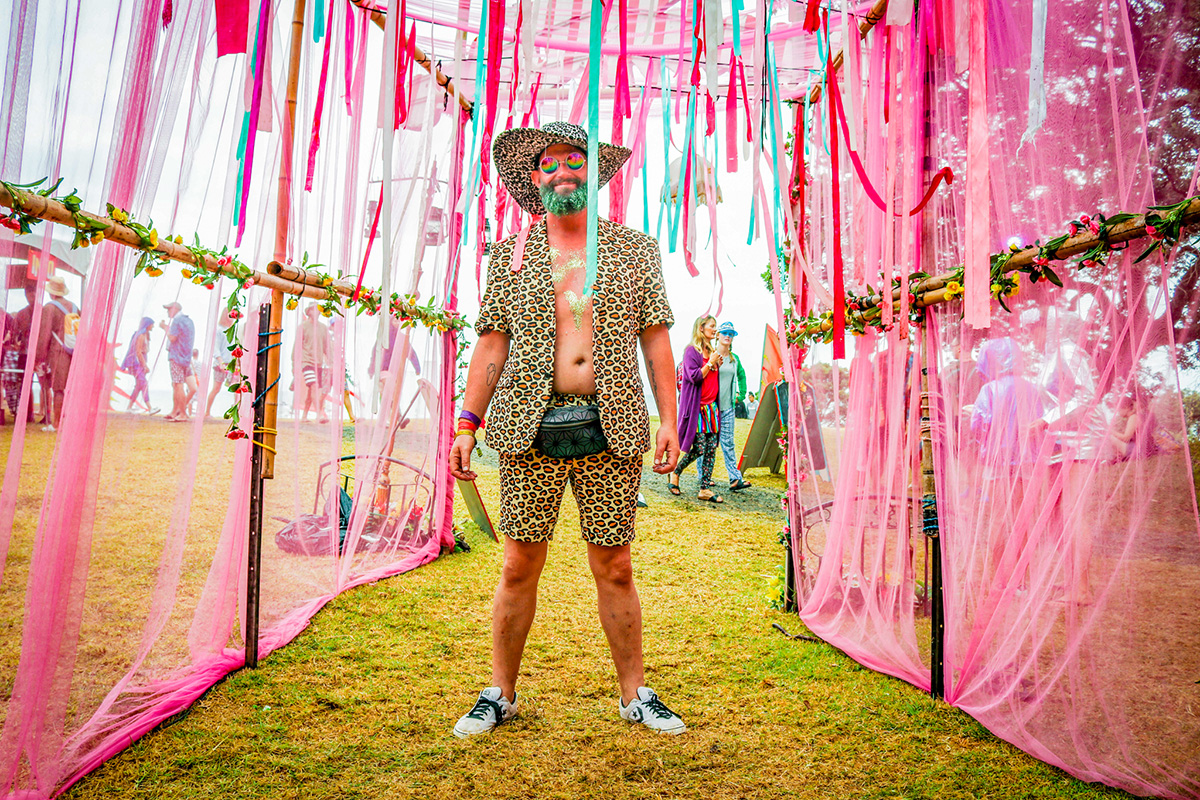 “What’s the story behind the biodegradable glitter? Actually, that’s all Splore’s fault. I was hyping up this other glitter product and Freddy, the producer of Splore said to me, ‘What’s the difference between microbeads and glitter?’ and I went ‘Oh shit’ then the penny dropped.

“I’ve been body painting since 2001, so I feel really guilty because I’ve put glitter everywhere. My heart. So I told Freddy, ‘I’m going to find an alternative, I’m not gonna let this slide.’ It took me about 6 months to find an alternative and yeah we got rid of all our shop and converted to biodegradable.” 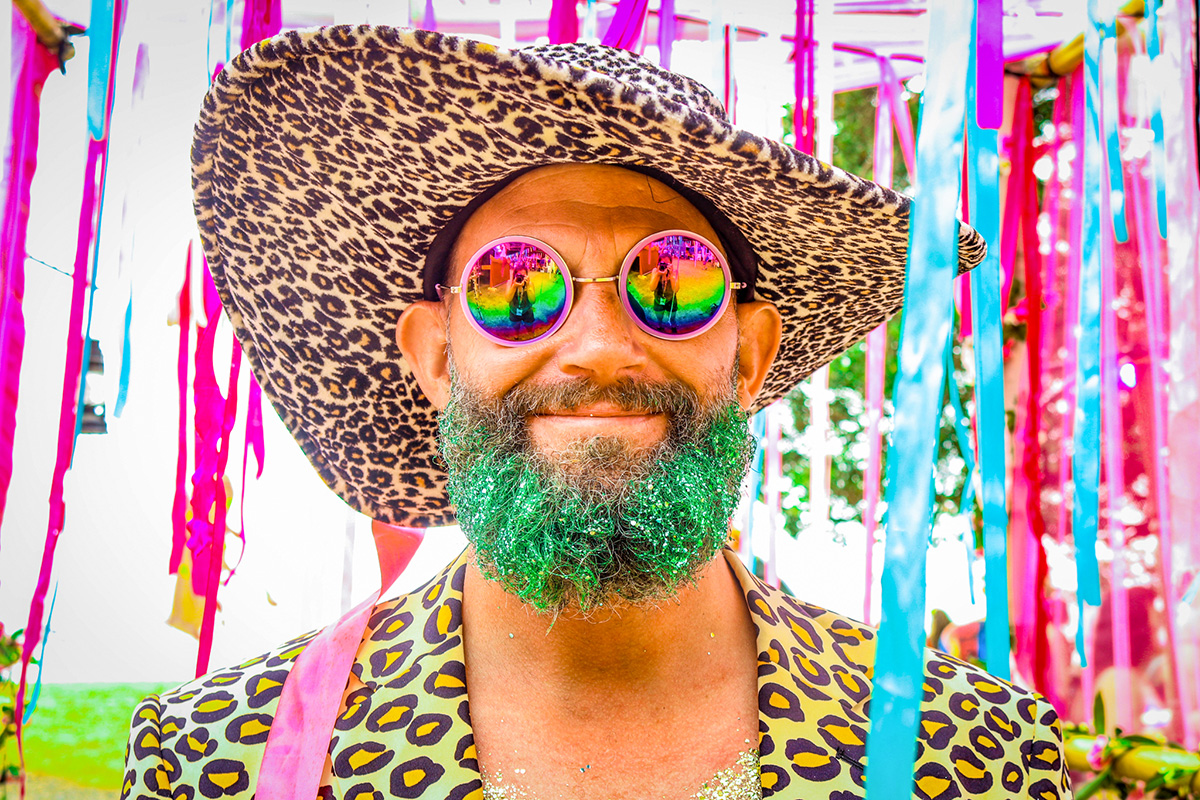 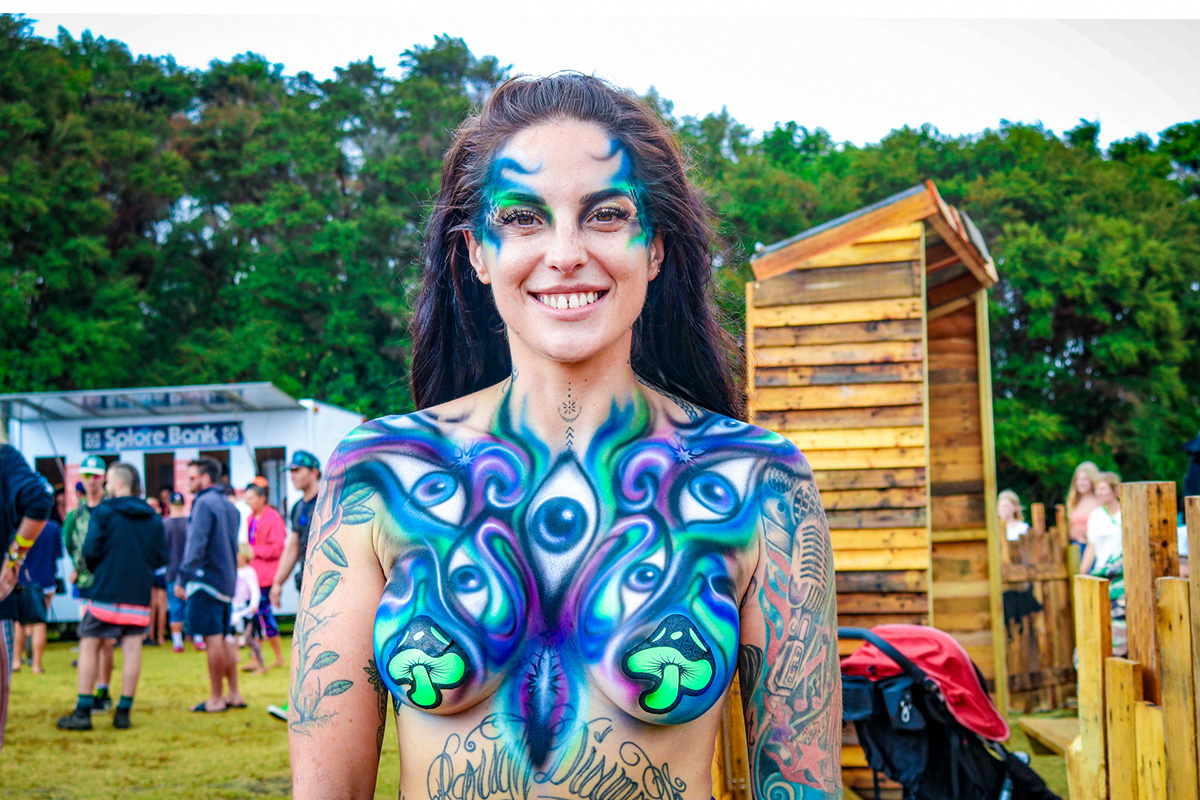 “Because the theme is infinity, I wanted something that represented psychedelic different realms and different dimensions.”

“My pants are made by a girl in New Zealand and her brand is Ivy and Stone. She does it all by herself, like handmade. I like supporting full New Zealand businesses and girls that are just going out and going for it because it’s so risky, especially when there’s so much competition these days.” 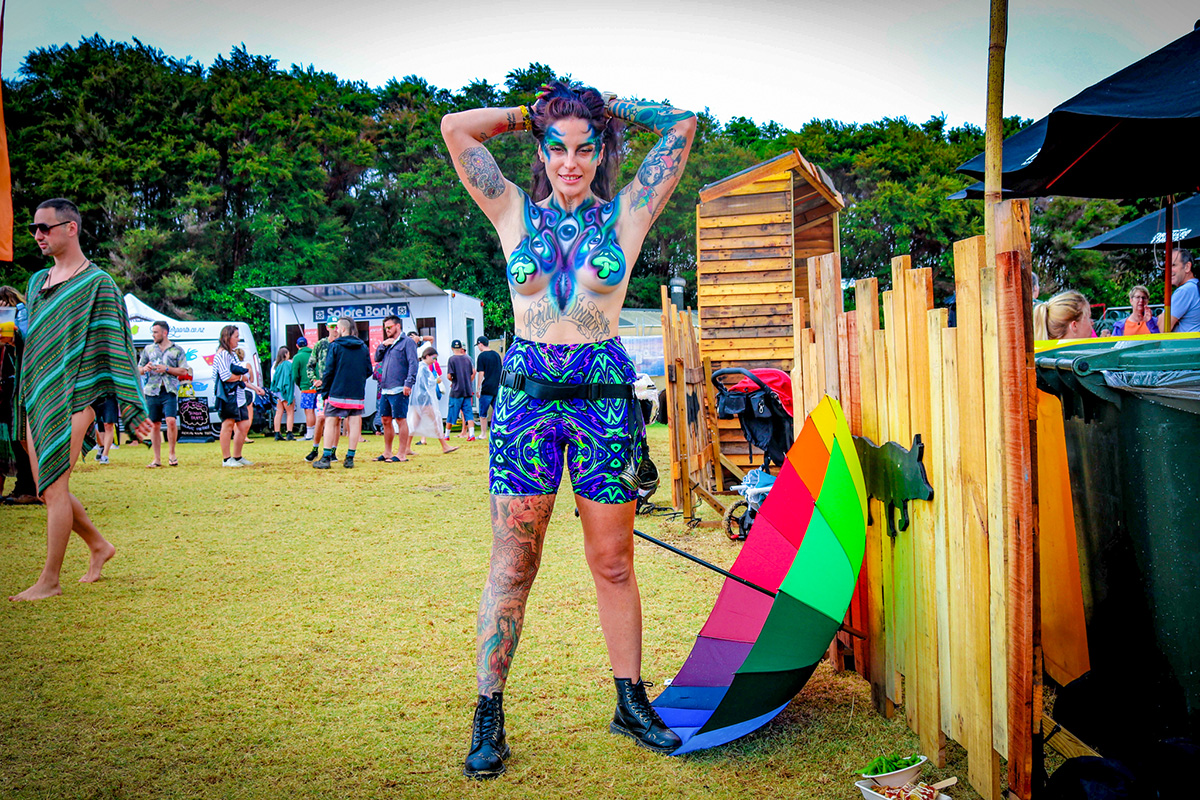 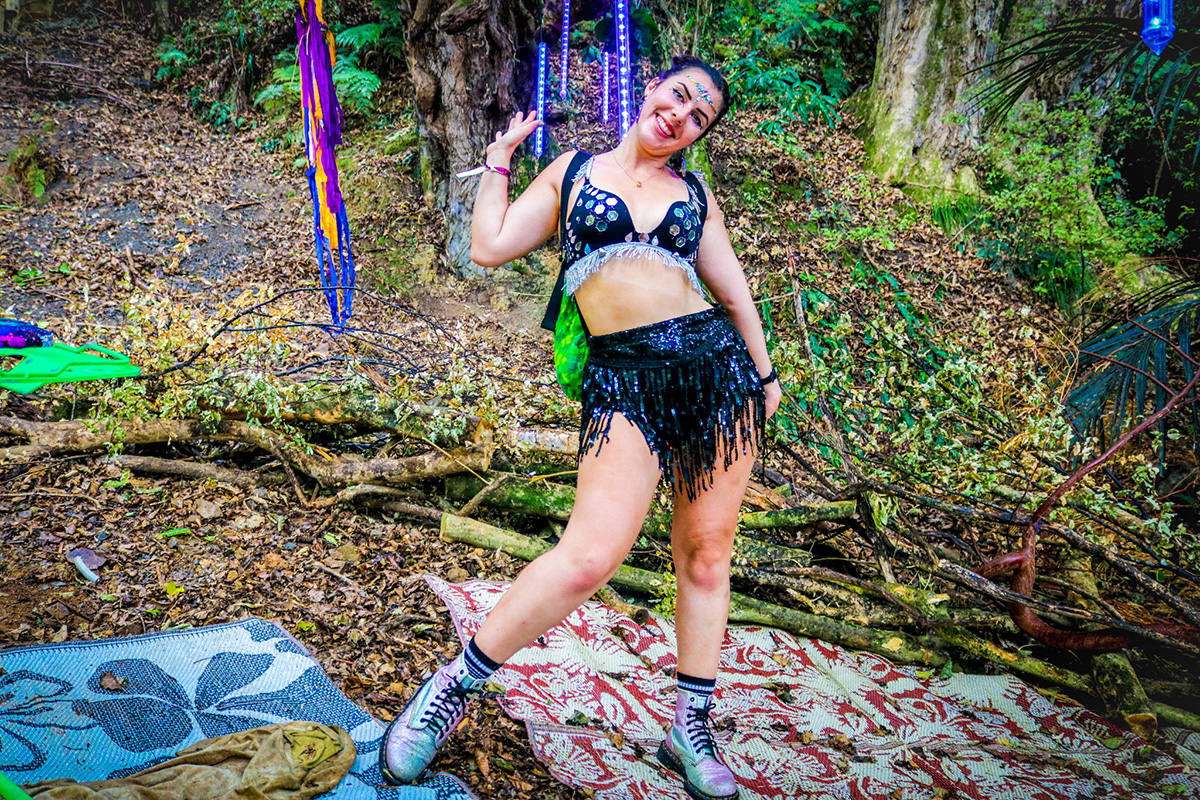 “The bra is just one of my old bras and it was starting to lose its uhh… tact because somebody ripped it off me… and now the hooks are broken at the back so I thought I’ll put it to good use and bedazzle it for Splore.”

“I’ve started to realise that it’s really stupid buying things that are made in bulk and it’s often made in working conditions where people just aren’t treated very fairly and the pay is shit. Think of all the clothes that you just chuck out, where do they go? They need to be broken down and it’s just a never-ending cycle. So it’s just something that somebody no longer loves that you can love again which is quite a nice concept I think. “ 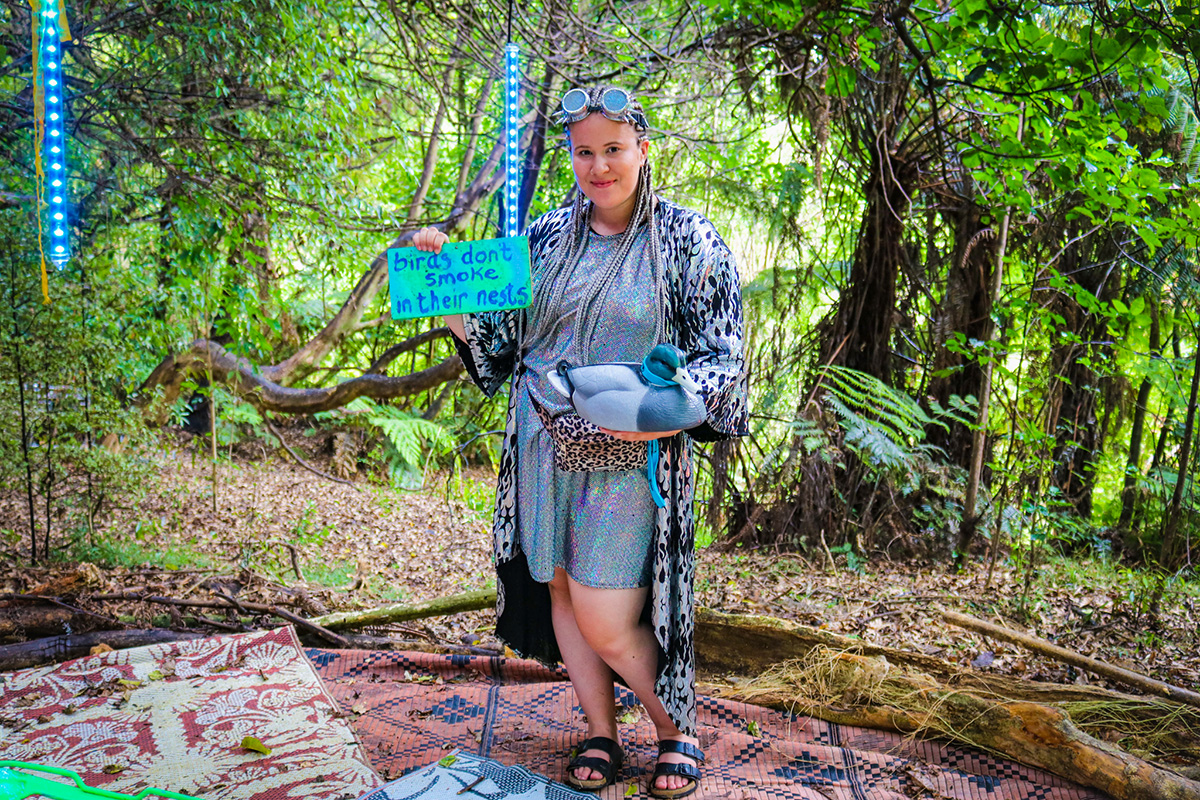 “I guess you do notice cultural appropriation at festivals. Like I noticed someone in something this morning that I didn’t think was culturally sensitive and I think people just need to have a better understanding of it. People think it looks amazing and it does look cool to wear an Indian headdress – they look amazing but you shouldn’t be doing it. Since Splore said to stop doing them I haven’t seen them as much.” 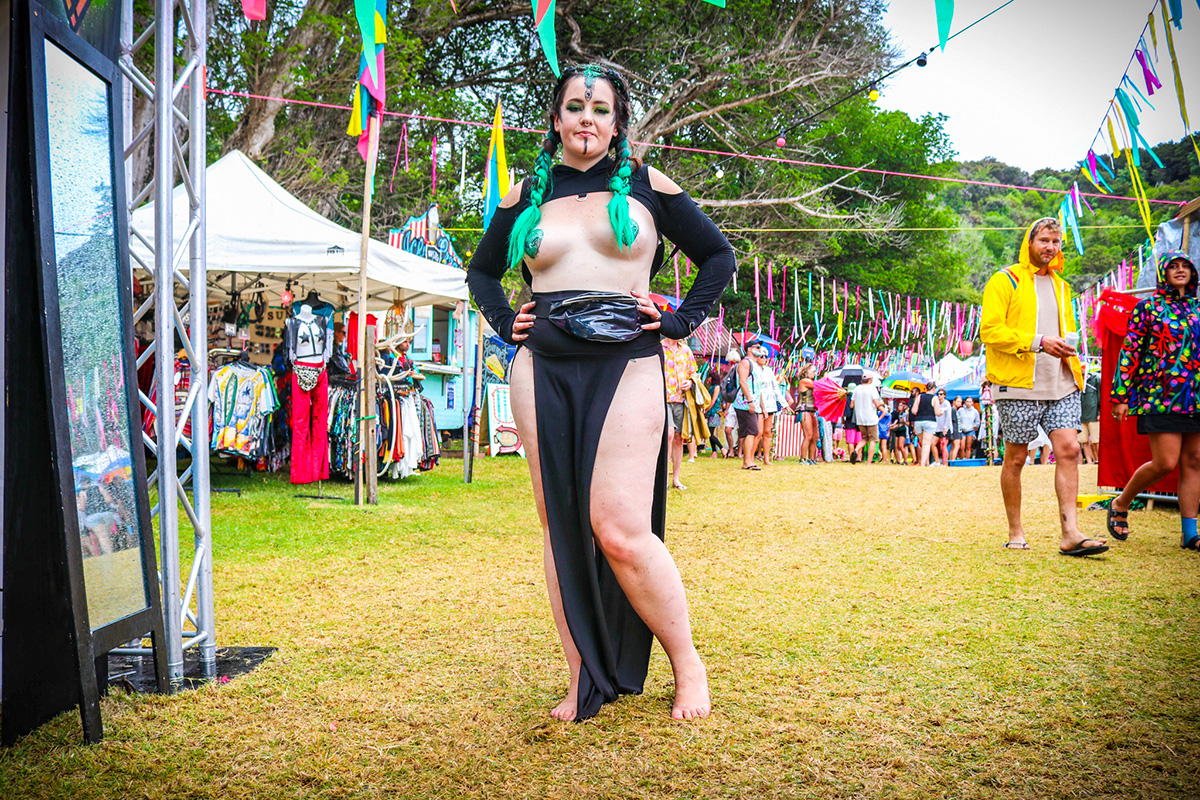 “I got my top from an online store – I think it was like a goth shop. I made my own skirt and that’s all I’m really wearing.”

“I’m part of BodyFX – we all try to come up with something and dress the same so we’re going post-apocalyptic, Mad Max meets cyber goth.”

“We’re all about sustainable fashion, we love opshopping and making our own clothing and grabbing little bits and pieces and mixing them up. We make our own booby covers which are compostable and we’ll only use bio glitter as well.” 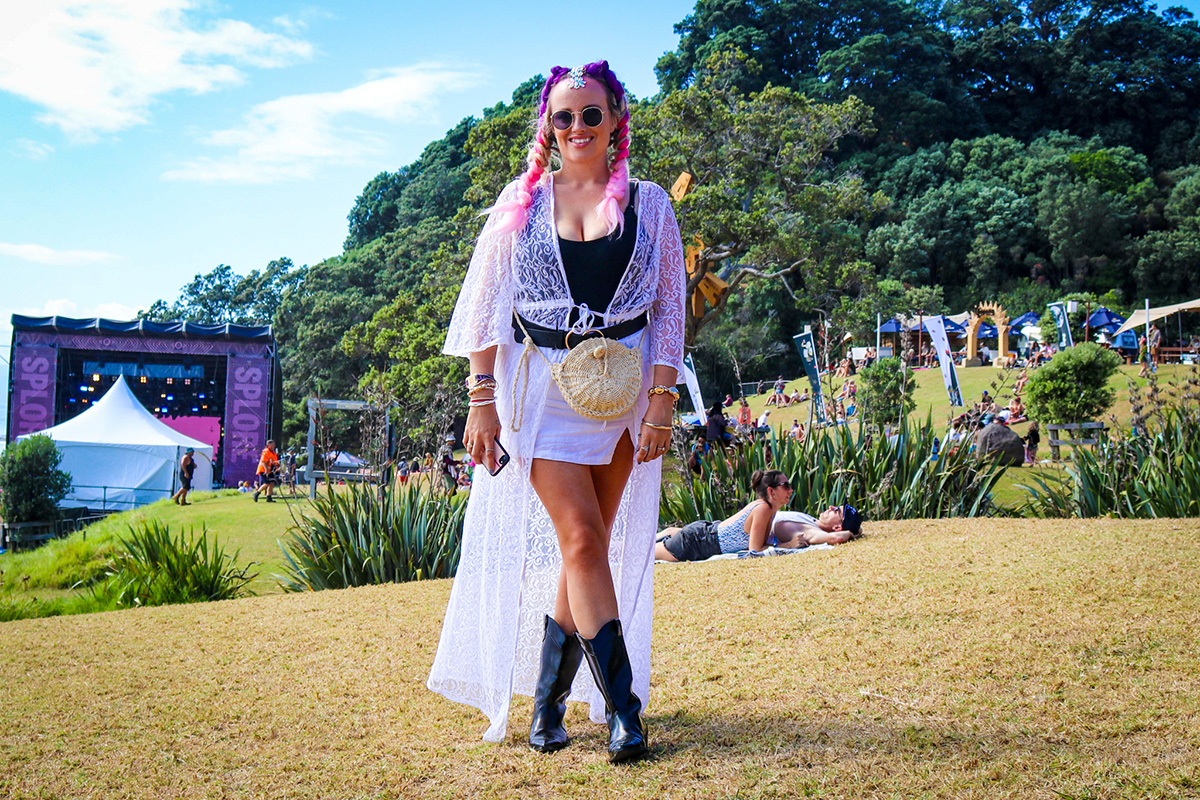 “My one-piece is just a swimsuit that I’ve had for years. This bag is from an opshop and this lace kimono is ya fast fashion that you’re trying to avoid.”

“I’m actually one of those people who rents a lot of things for events because I am someone in the past who would just buy something, wear it, get rid of it, cheap and creating all the waste and stuff so I think I’m definitely more aware of it these days because it’s been brought to our attention.”