The government has announced the details of its “Rebuilding Together” Budget for 2020.

Opposition parties say the budget doesn’t have a clear plan to get the country back on track and it’s “throwing money at our problems”.

Here are the key points. 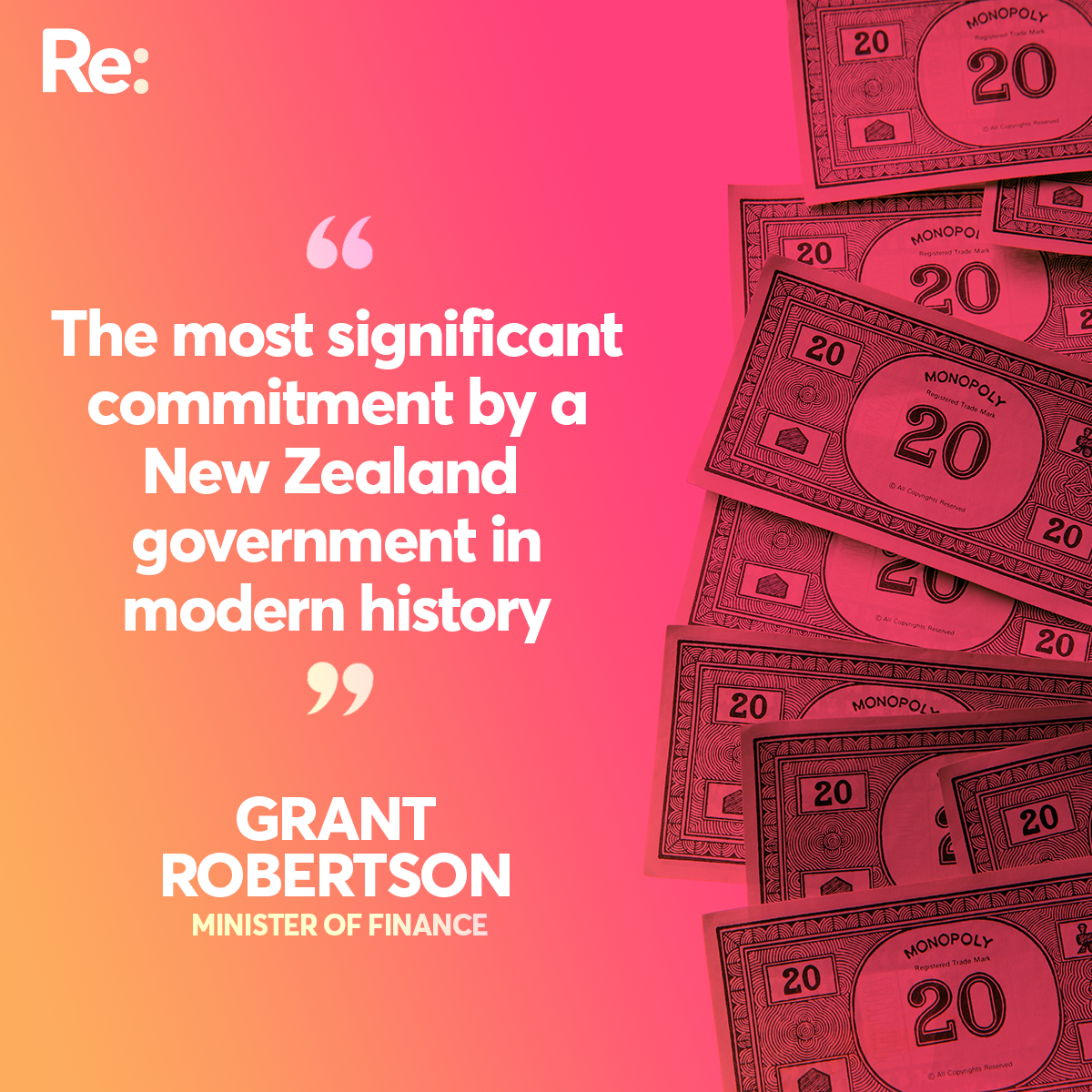 It’s hard to imagine what a number this big means - but for context, this is nearly double what last year’s Budget, at $25.6 billion, was.

$20 billion has not yet been allocated - it’s set aside for the ongoing Covid-19 response. 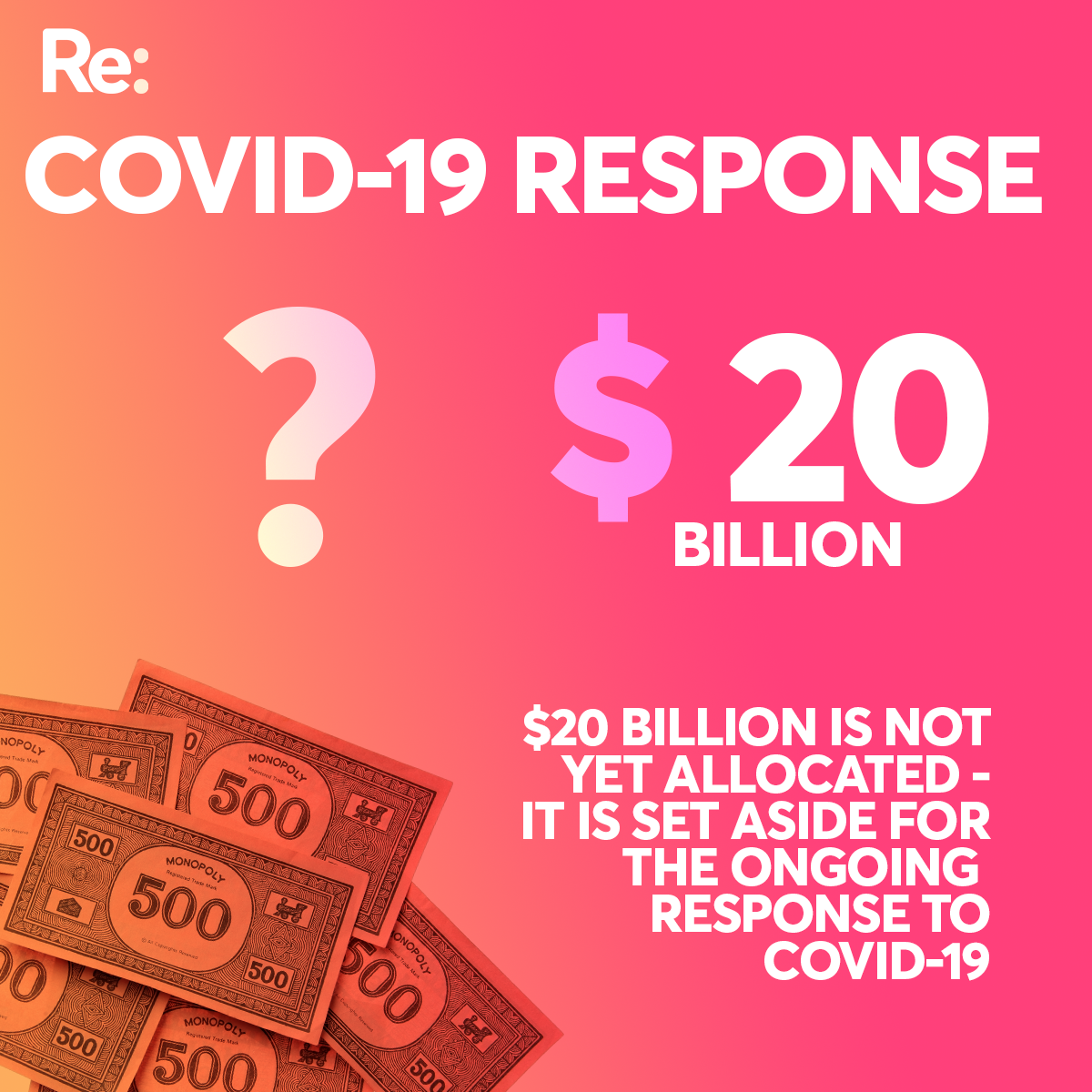 This Budget is our largest ever increase of debt, and debt to GDP ratio.

“There were no costless decisions in this situation,” said Finance Minister Grant Robertson. “Our success at controlling the virus has come at a price” to jobs and businesses.

The focus of this budget is on jobs, “keeping people in their jobs where we can, directly creating jobs that help support our environment and conservation estate.”

The government’s finances were in a relatively good place pre-Covid, with a forecast surplus of $1.3 billion dollars. That’s now turned into a forecast deficit of $28.3 billion by June 2020 and a $29.6 billion deficit in 2021.

Our GDP declined by over 20 percent in the June 2020 quarter.

“The rainy day has arrived but we are well prepared,” said the Finance Minister. 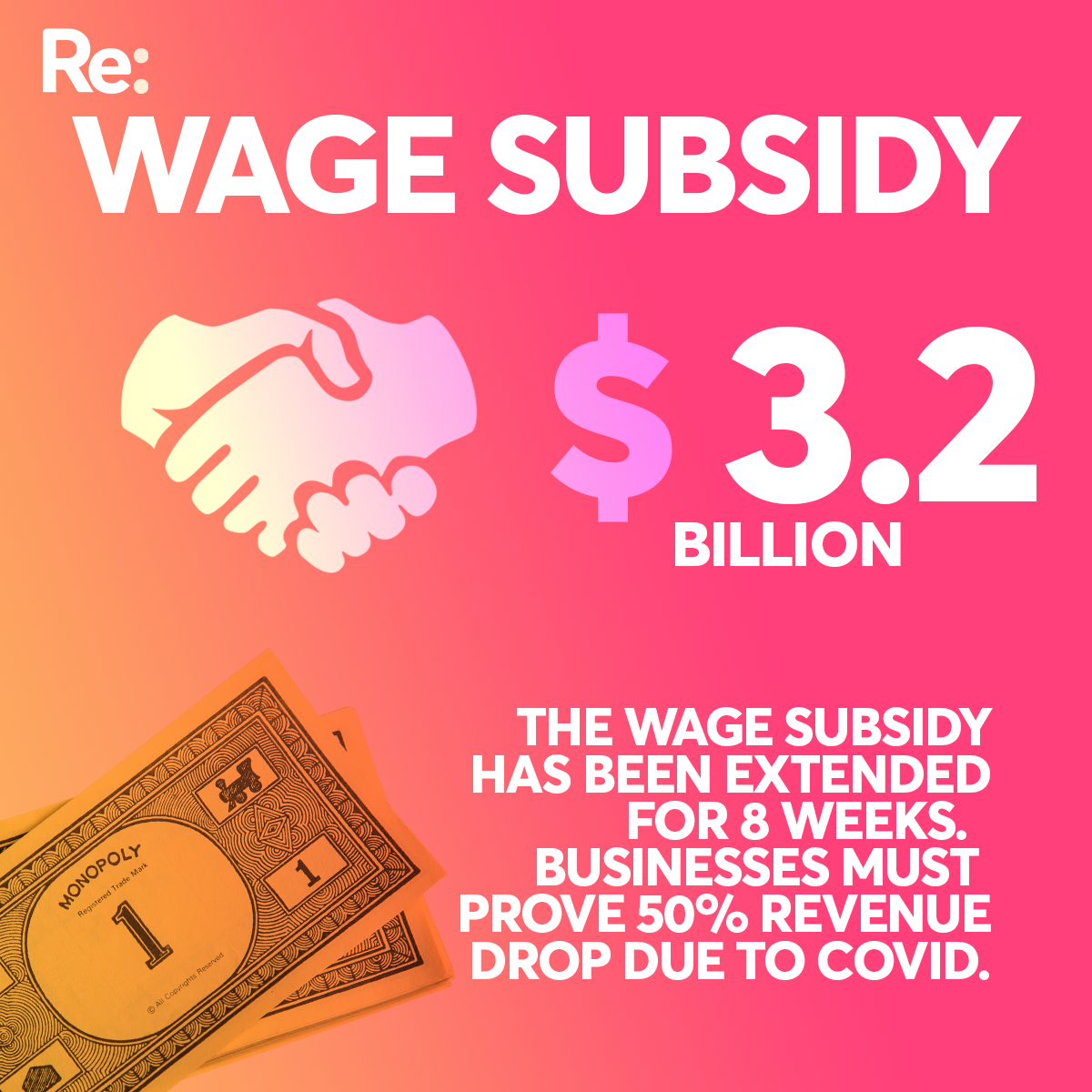 Unemployment was at 4% pre-Covid. Now, it looks like the unemployment rate will increase to 9.8% by September this year.

The government is aiming for this Budget to get unemployment back down to 4.2 percent (pre-Covid levels) within two years, and says we could be out of a recession and have the economy growing again by next year.

But businesses will now need to prove they have a 50% drop in revenue due to Covid-19 to be eligible. Under the original scheme businesses needed to prove a 30% revenue drop.

The extension costs $3.2 billion, and the government has already spent $11 billion on the scheme so far. 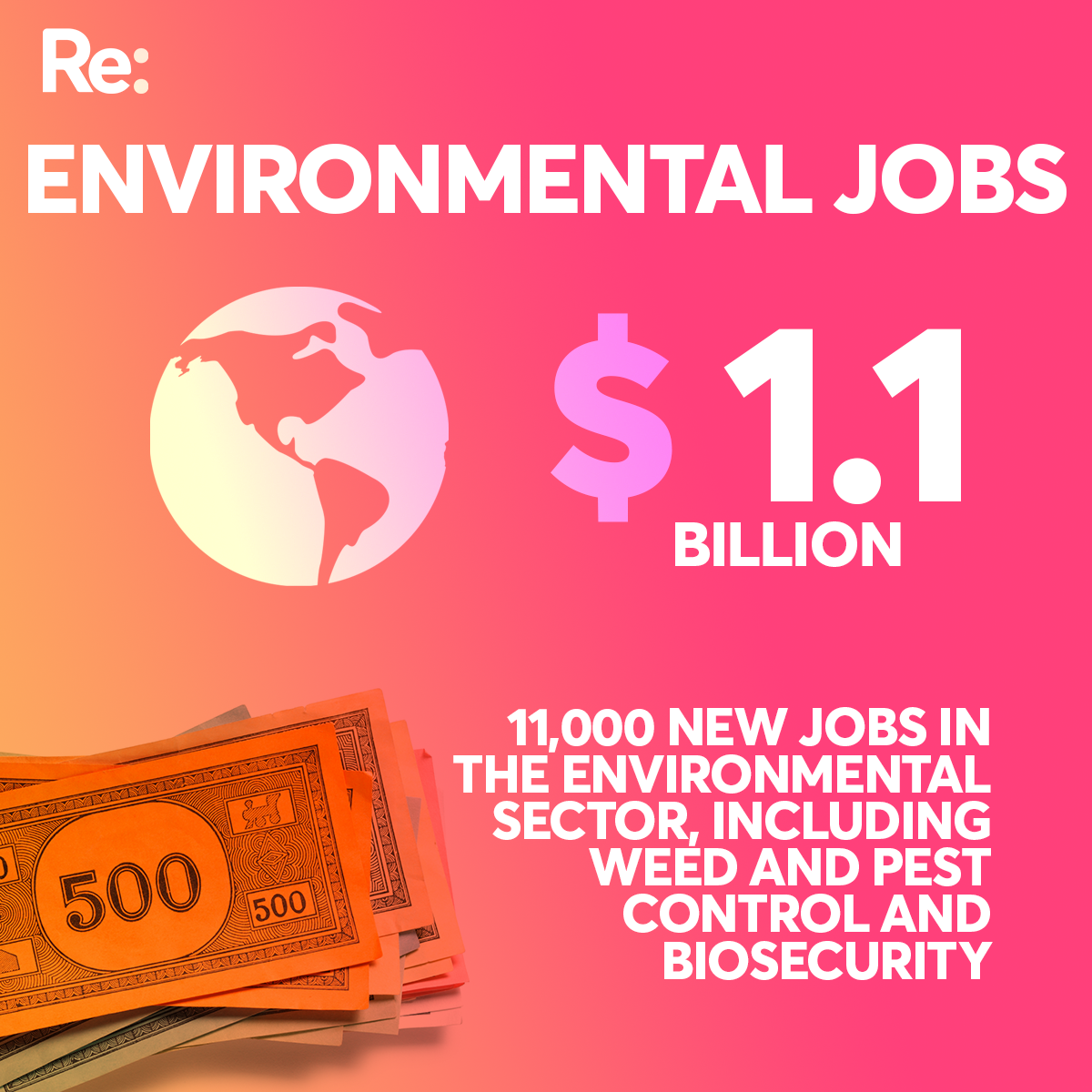 The government says 11,000 new jobs will be created in the environmental sector, costing $1.1 billion.

These include regional environmental projects, weed and pest control and enhancing biosecurity.

People of all ages will be able to access free training for the trades industries. It’s not just targeted for school leavers, but anyone who may need to change industry due to Covid-19’s impact on jobs.

It will include construction, agriculture, manufacturing, community health, counselling and care work. 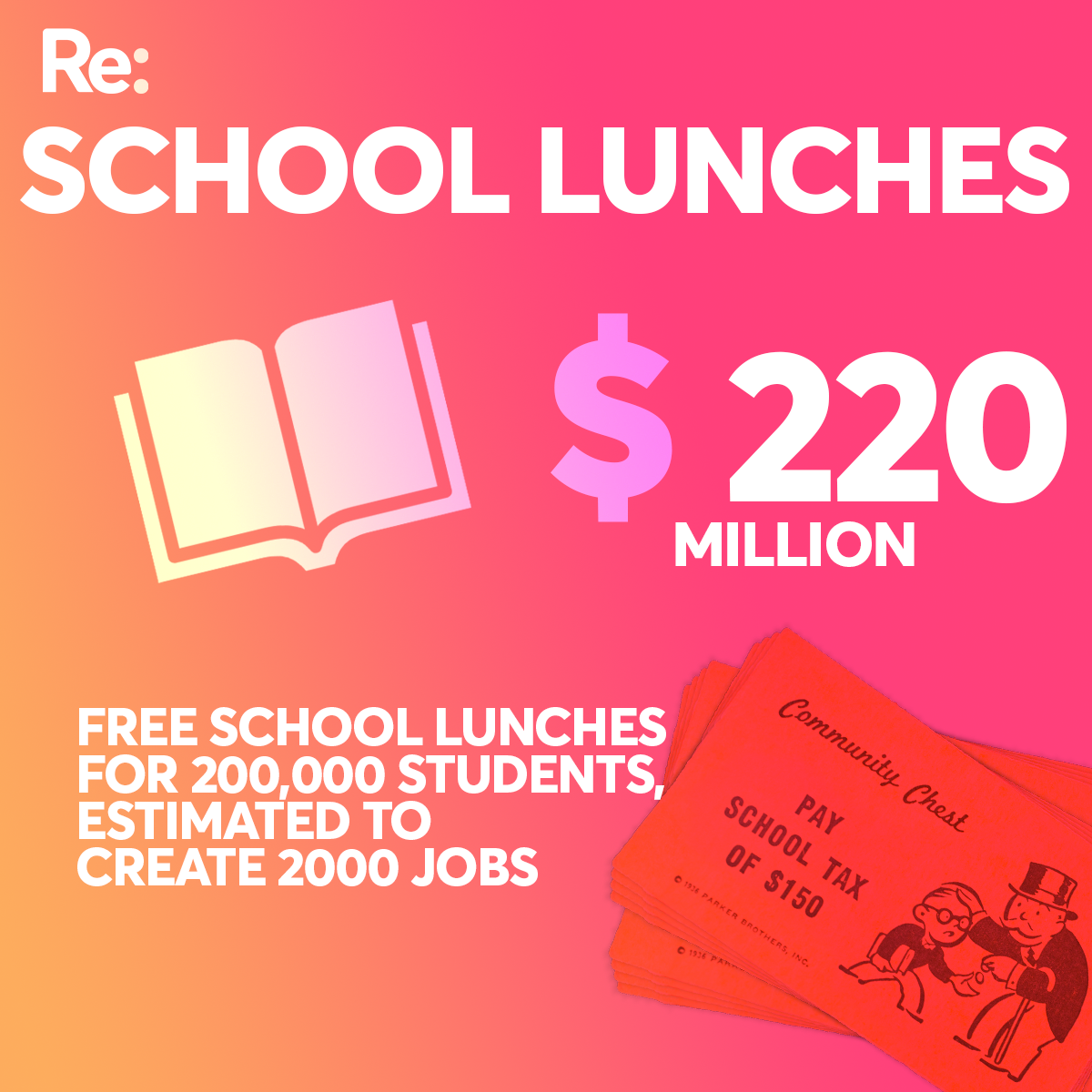 Free school lunches will be provided to 200,000 more children. It’s estimated this will help create 2000 jobs.

This includes support for children who witness family violence, a special agency for victims of choking offences and for service providers who are seeing increased demand.

To help with the increased demand at social services and food banks, budgeting services and community groups. 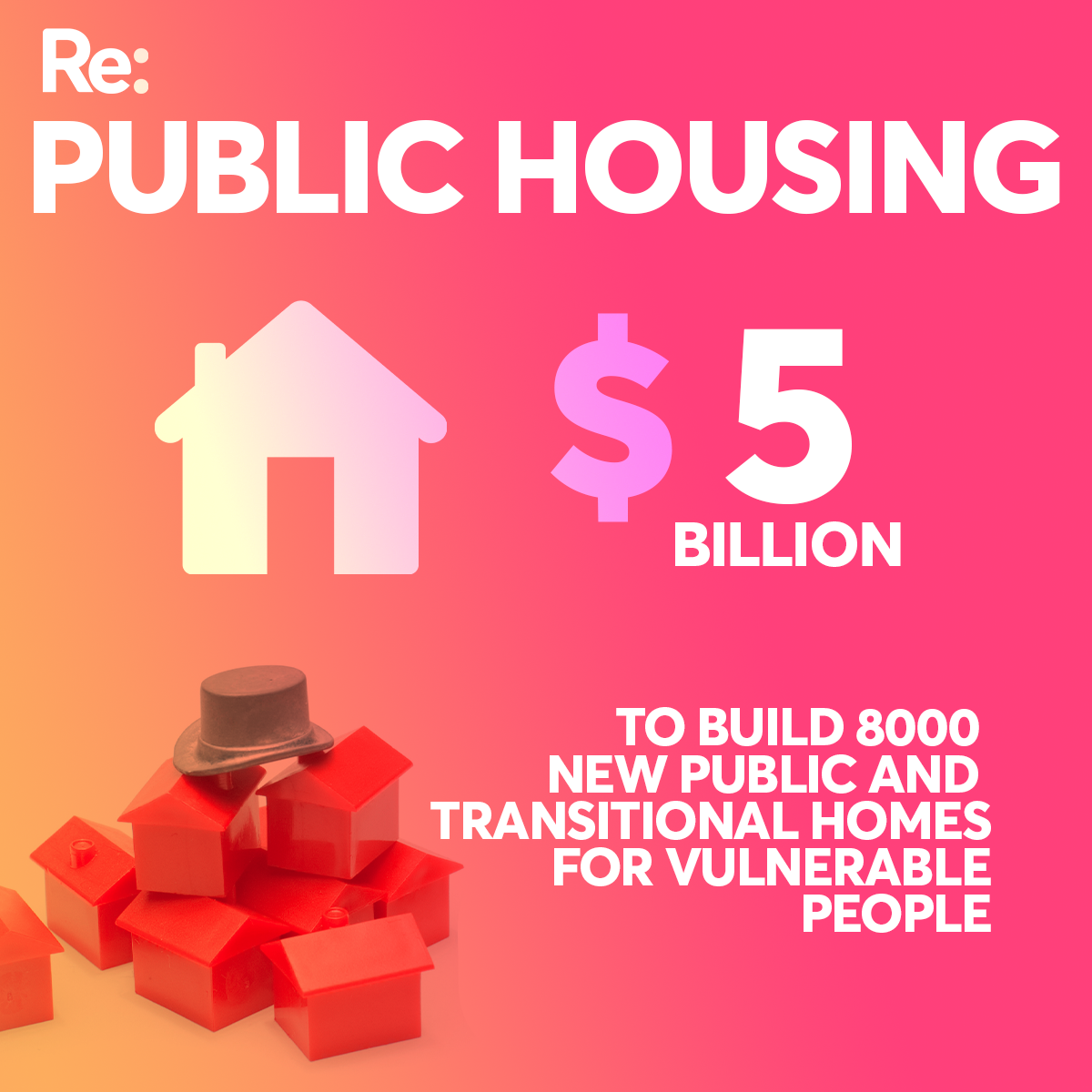 The Government says it will build 8000 new public and transition homes for vulnerable people.

Estimated to help make 9000 homes warmer. Low income households will be able to have 90% of their insulation cost covered. 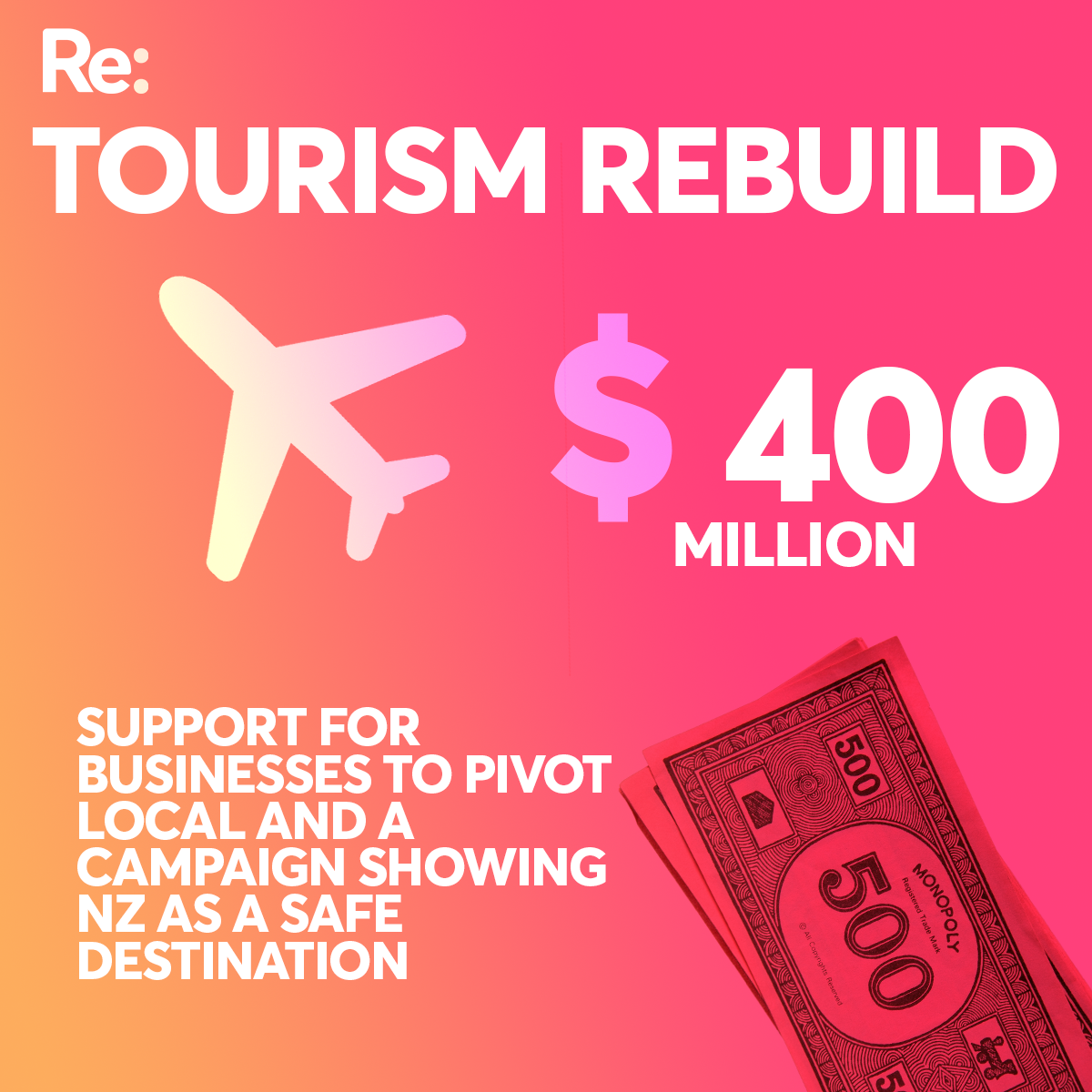 A fund for infrastructure projects, with a focus on job creation, income growth and construction activity.

This will include support for businesses to pivot towards local or Australian visitors, a campaign showing New Zealand as a safe travel destination, and keeping tourism assets like attractions in shape. 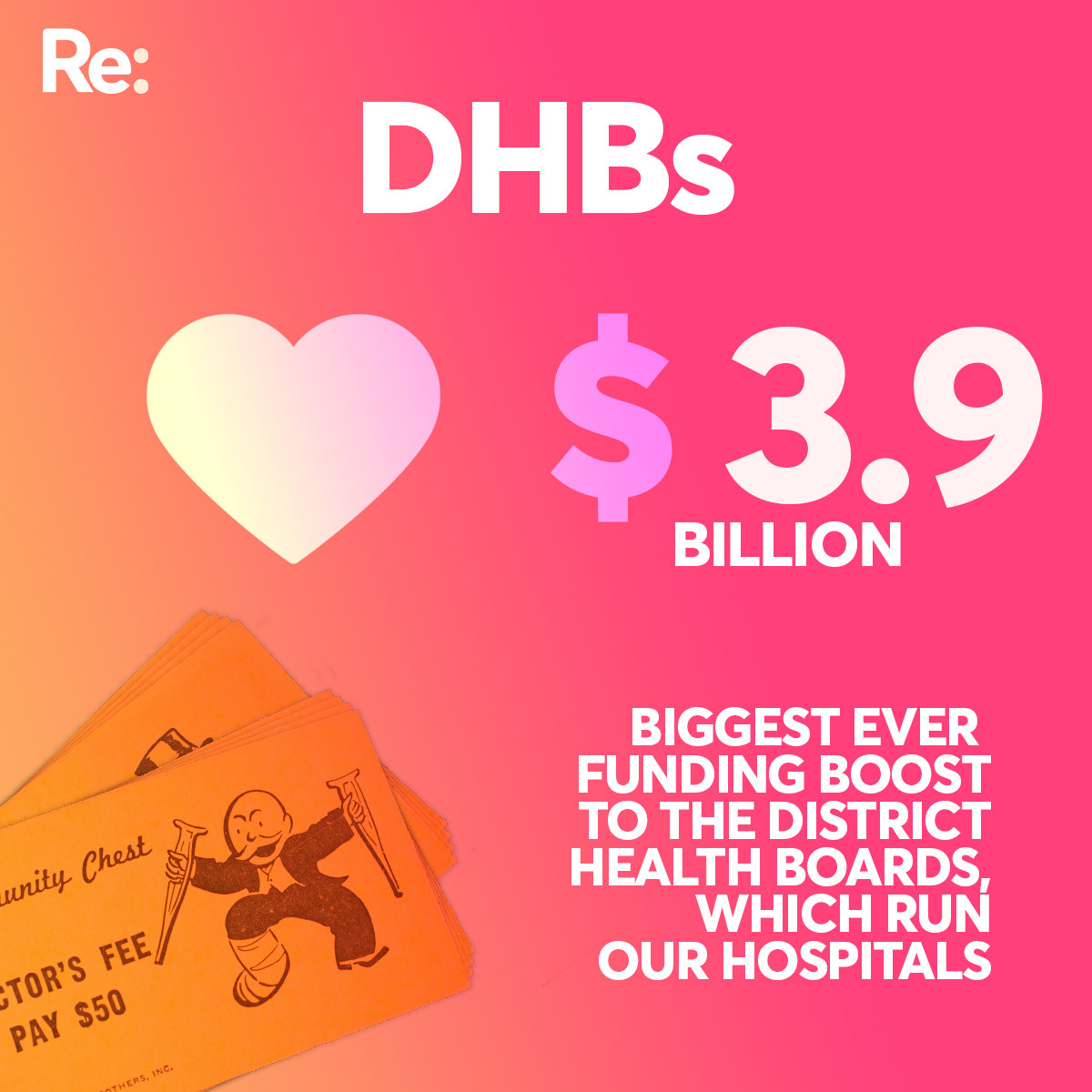 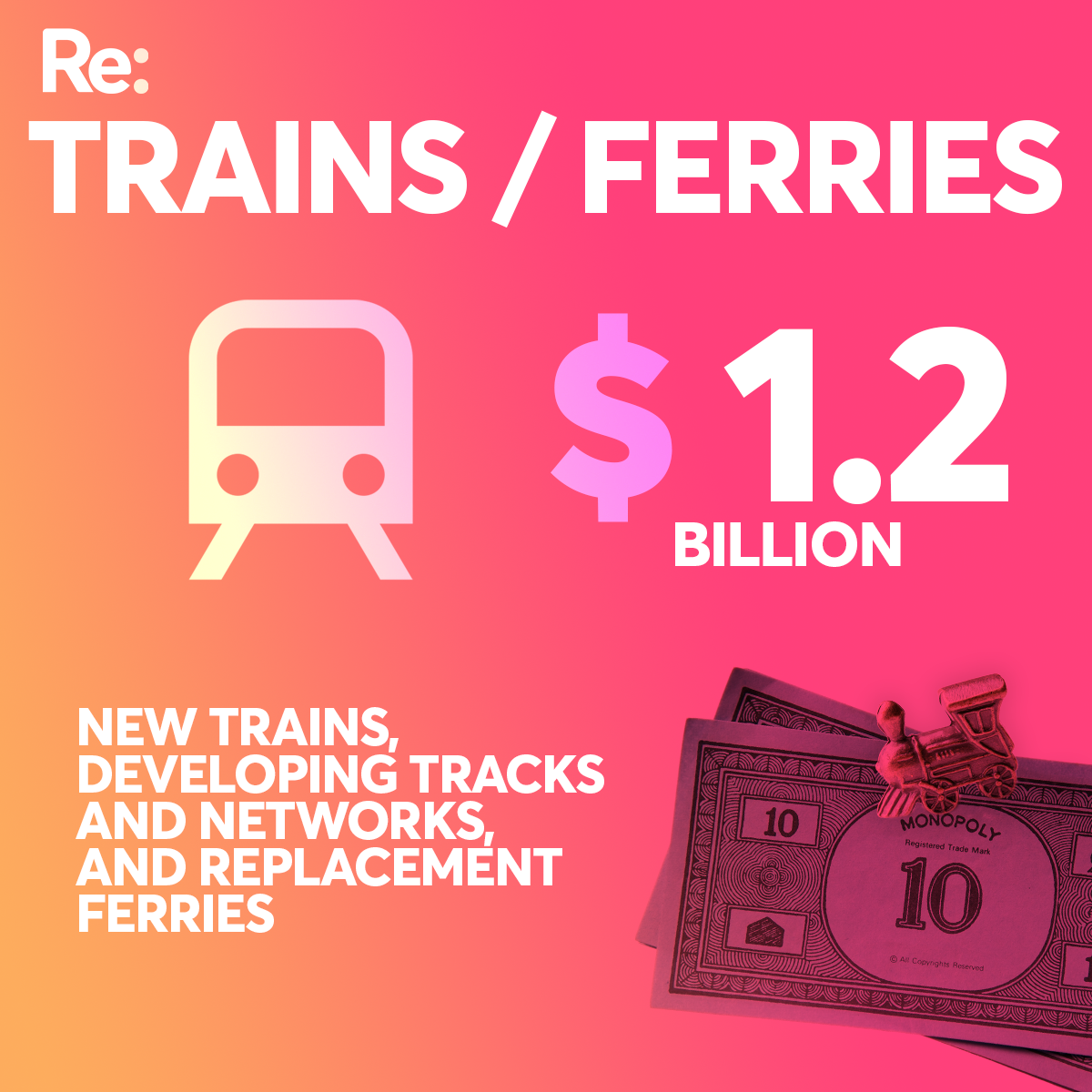 This is the biggest-ever funding boost to DHBs, the organisations that run our hospitals.

To help clear a backlog of approximately 153,000  radiology, specialist appointments and surgeries.

An increase over four years for our national drug-buying agency to purchase medicines, medical devices and vaccines.

So the health agency can continue to provide on-the-ground support and care to communities who need it most. 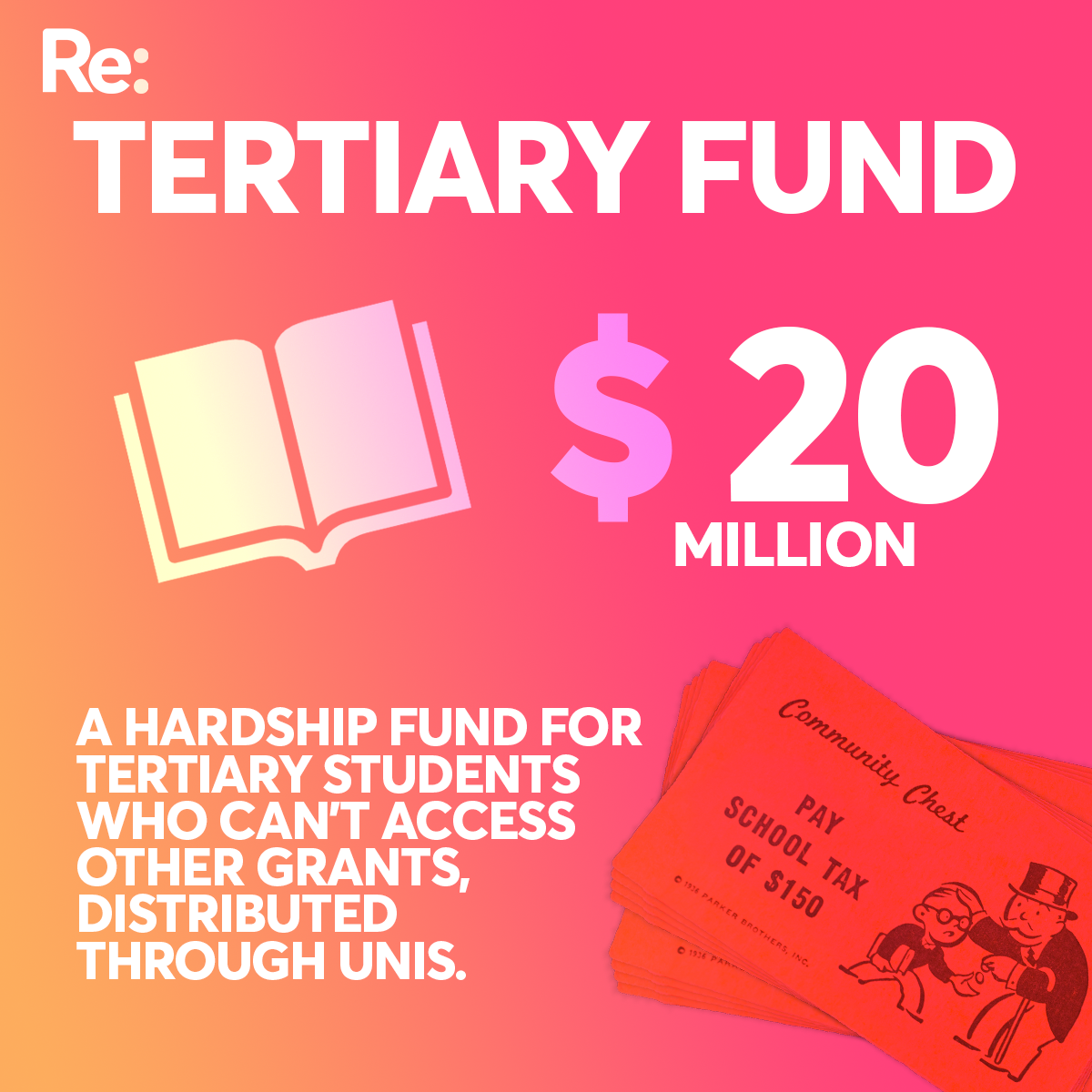 A fund for tertiary students who can’t access other grants, distributed directly though universities and other tertiary providers.

To bring ECE teacher salaries in line with those of kindergarten teachers.

To help language revitalisation, make sure teachers are properly paid and for facility maintenance.

What the political parties said

National said: the Budget “lacks a coherent economic plan and our children and grandchildren will pay the bill”

The National Party says the government is taking on $80,000 of debt per household. Leader of the National Party Simon Bridges said it “doesn’t have the plan we need to get New Zealand working again.”

“With a thousand people a day joining the dole queue we needed a proper plan. Spending money is the easy part. But investing billions where it will make the most difference was what we needed.”

“It needed to be spent in a responsible and disciplined way. What this Budget lacks is any detail and accountability of how it will be spent and what it will achieve.”

Labour said: the Budget focuses on the “things we know matter”

“A mere 6 months ago nobody would have imagined a world that is in the grips of a global Covid-19 pandemic,” said the Prime Minister Jacinda Ardern. “And yet here we are.”

She says the Government will apply the same “unrelenting focus” on the economy as they did on health.

She says now is the time to focus on ingrained problems like housing, poverty and climate. “In three years time I want to look back and say Covid-19 was not the point those problems got worse, but the chance to make them better.”

Greens said: the “huge investment” in green jobs will kick-start a sustainable economy

The Greens are in Government in a confidence and supply arrangement with Labour and so played a role in setting some of this Budget.

Green Party co-leader James Shaw said the Budget will create thousands of green jobs. “The package is a win now for New Zealanders wanting to get to work, and the health of the natural environment, in the immediate and longer term.”

Co-leader Marama Davidson said the investment in housing will get “thousands more families into the warm, safe homes they deserve.”

ACT said: the Budget is “throwing money at our problems”

Leader of the ACT Party David Seymour said Labour’s “track record shows it will fail to deliver on its promise to rebuild the economy”.

ACT says the Budget should have “reprioritised spending, ending low-value programmes and redirecting them to tax cuts or targeted support for businesses.”

“The failure to do so means future generations will be saddled with massive debt and will need to pay higher taxes to get it under control,” says leader of the ACT Party David Seymour.

New Zealand First is in coalition with Labour to form the Government, and was responsible for areas like defence, infrastructure, school lunches and rail.

Deputy Prime Minister and leader of NZ First Winston Peters said it was vital the Budget “builds on restoring independence in every sense, to every day New Zealanders by creating jobs for those who have had them stripped away by this viral invasion.”

“By thinking outside the bubble we will supercharge our economy in ways we have never seen before and prove that in times of crisis, as we have time and time again, that New Zealand can be relied on to lead,” Winston Peters said.

New Zealand is well-placed to borrow, but what’s going to happen to our taxes? Professor Adrian Sawyer, University of Canterbury.

“The big unanswered question from Budget 2020 is tax-related,” says Professor Adrian Sawyer, of the University of Canterbury’s Business School. “How will New Zealand repay the debt that the Government has and will be incurring?”

The good news is the Government had very low debt as a percentage of GDP before Covid-19. “The bad news is that in the months and years to come, government debt will have increased by more than $150 billion.”

He says the Budget, like the one before it, “contains almost no specific measures that are tax related.”

“The future for New Zealand must be increased taxes.” The government will gain some money from increased economic growth, but this won’t be enough to bridge the gap. So, we could see new taxes like a capital gains or wealth tax. “The future, from a tax perspective, like COVID-19, will be unprecedented in New Zealand’s recent history.”

The “most ambitious budget in my lifetime”, with a bold announcement on public housing: Professor Philippa Howden-Chapman, University of Otago.

“This is certainly the most ambitious budget in my lifetime,” says Professor Philippa Howden-Chapman, of the department of public health at the University of Otago, Wellington.

“It sets out how a wellbeing approach seriously considers what is needed to improve and maintain the public’s health, create and maintain jobs, increase sustainability and help reduce carbon emissions, at a time of economic crisis.”

The commitment to rebuilding public housing and transitional housing, along with related infrastructure was a “bold announcement”.

However, the increase in subsidies to help families insulate and warm their houses “does not address the full scale of the problem.”

The Māori voice has been obscured during Covid-19 and stronger investment in the Māori economy is warranted: Dr Diane Ruwhiu, University of Otago.

But given “the proven power of the Māori economic engine in Aotearoa New Zealand, stronger investment in our Māori economy is warranted.”

“Now is the time, in the bicultural spirit of our nation that we have the potential to consider the impact the budget could have.”

Rather than low-wage work, job creation should have focussed on the reusable waste sector: Dr Jeff Seadon, Auckland University of Technology.

The jobs created in this Budget in construction, tourism and hospitality are short-term or low-wage roles, says Dr Jeff Seadon, programme director of built environment engineering at Auckland University of Technology.

“Over 22,000 long term jobs throughout the country can be created if we reuse or recycle our waste that we send to landfill each year.”

“The results will be reduced imports, less pillaging of the earth’s scarce resources and skills development for low- to non-skilled people employed in this area. That is a strategy to build a more resilient economy by not relying on globalisation to succeed.” 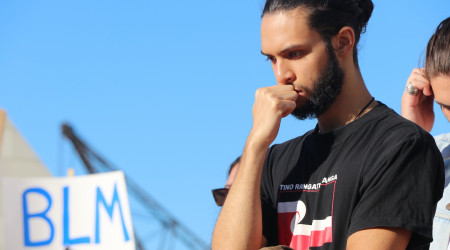