The high school Chevron Hassett went to in Wellington was low decile, predominantly brown and had a large refugee student population.

“All of us remember this teacher,” he says.

Chevron, who is Māori, says a particular teacher at the school had a reputation among students for being racist. The teacher made a late list specifically for Māori students and called students racist slurs like “cannibal”, “savages”, “coconuts”, “pirates” or “terrorists”.

During one class the teacher claimed that Abel Tasman had “discovered” New Zealand. When one of Chevron’s friends challenged the teacher, saying that Kupe had in fact discovered Aotearoa, the teacher responded with “you’re dumb, you’re savages” and “we civilised you”. Up until last year the teacher was still working at the school.

While this teacher might have been the worst, it wasn’t just him. An environment of racial tension at the school meant that racist language became normalised, often being used between students as well as their teachers. And in spite of being a diverse and predominantly brown school, Chevron says it just wasn’t a good thing to be Māori. “I didn’t learn anything positive at school about my own culture.” 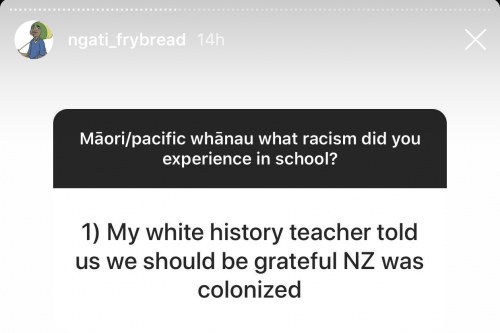 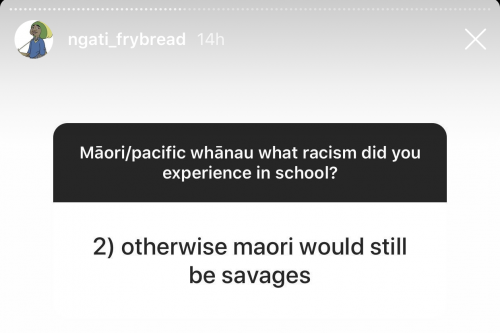 It’s hard to ignore the resounding awareness of racism sweeping the globe at the moment. Emerging from the Black Lives Matter movement in the USA, and ignited by the killing of George Floyd, scenes of relentless, powerful anti-racism action have been broadcast across social and news media. When thousands gathered in centres around New Zealand, it became clear that these conversations had reached our shores.

While the experiences of indigenous and people of colour in Aotearoa certainly isn’t identical to that of America, many have taken this opportunity to have a serious conversation about racism in our own country. Links have been made between the global movement and the specific ways that institutions, history and individuals reproduce inequality toward POC communities right in our own backyard.

One of these conversations sparked was around racism within our schools. An post made by @ngati_frybread, a Māori Instagram meme account asked Māori and Pasifika to share their experiences of racism at high school. They were motivated by the unfolding stories of racism locally, particularly the black face controversy involving a student from Westlake Girls High School and furor after teachers were accused of tearing down Black Lives Matter posters at Marist College. 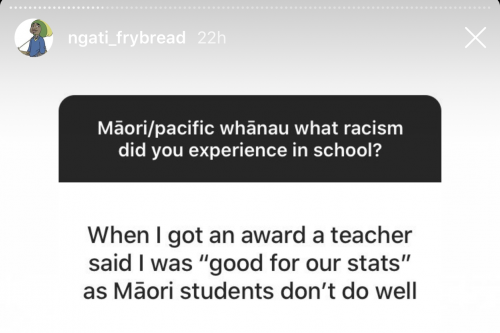 “There’s a growing consciousness around race and ethnicity,” says the person behind the @ngati_frybread account, who doesn’t want their real name used.

They were overwhelmed by the response to their post. Over just three days they received around 1000 responses that were being shared by countless Instagram users moved by the stories. Since, Ngati Frybread has made the posts permanently available on their Instagram to help continue the conversation.

“I had a compulsion to ask because when you’re that young you do feel you’re being hard done by,” they say.

What stands out as you read through these responses is how varied the experiences are. The stories range from racist name-calling and the devaluing of cultural practice by teachers, to systemic issues like under-resourcing of te reo classrooms or disproportionate suspensions of Pasifika and Māori boys. If anything, they underscore how normalised and pervasive racism is in our schools.

Phoebe Adams was one of many who responded to the Instagram post with her experience of racism at high-school. She’s Māori and went to a “majority Pākehā” school in the Coromandel.

At Phoebe’s school the Māori unit was so underfunded that “our kaiako literally had a closet for an office”. She also took kapa haka on and off throughout her time at high-school, recalling having to drift from classroom to classroom with the group as they were without a permanent space to practice.

This lack of support for kapa haka and te reo reflected a devaluing of Māori culture and knowledge, something Phoebe says negatively impacted her own relationship with te ao Māori. 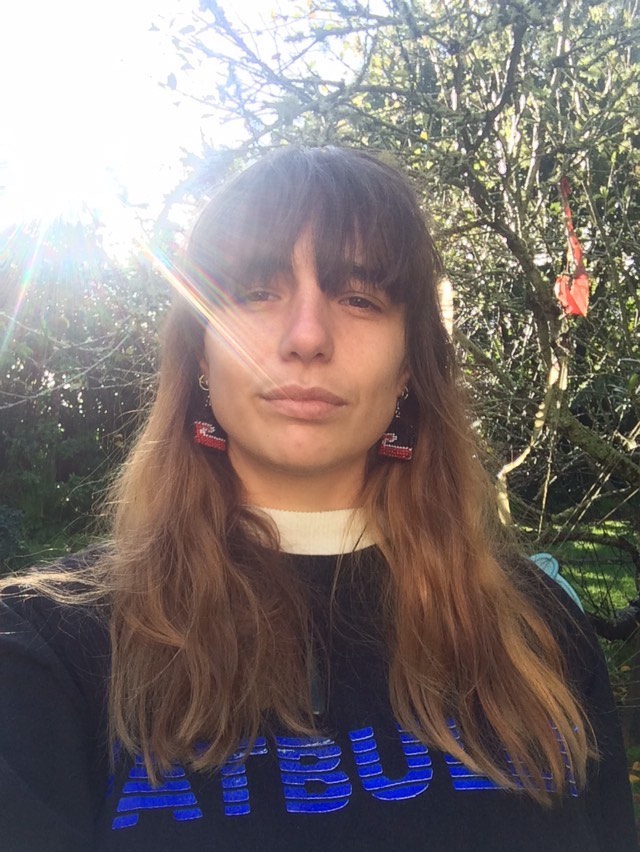 “A lot of my time at school it felt as though I had to choose between te ao Māori and te ao Pākehā”.

Ngati Frybread’s own high school experiences of racism echoed those in the Instagram responses. They recount “humiliating” incidents where high school teachers treated Māori and Pasifika students as thieves when things would go missing in the classroom.

“I’d let them check my bags - it would be a sandwich or something - so not worth invading our privacy.” 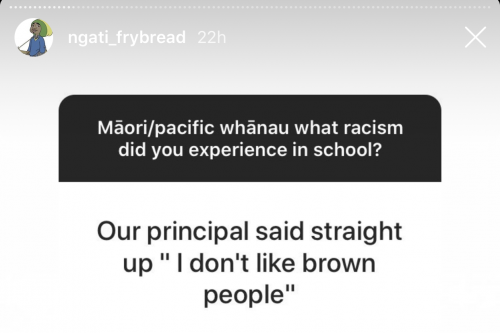 As a student they felt they were “perceived to be a criminal in waiting” by those working at the school. Being labelled like this leaves a lasting mark too, especially for high-school aged students right at the time when we’re all meant to be figuring out who we are and what we want to be.

Ngati Frybread believes it’s clearly a systemic issue. While awareness of the role of institutions have in perpetuating racial discrimination has arguably increased over the past decades, in particular around the criminal justice system, educational institutions seem to have not received the same focus.

New Zealand has a long history of racism in our education system. Between 1867 to 1969 a system of Native Schools operated in New Zealand. These were state-controlled primary schools set up in Māori communities who requested them. Though Pākehā could attend too, the main objective was to support the state policy of assimilation. For Māori, this meant that for over 100 years, the suppression of cultural identity went part in parcel with attending school.

Most notorious among the impacts of this system was the unofficial suppression of te reo Māori - a process that almost wiped out the langage. Many of us have heard the stories, even from our own koro and kuia of being physically and verbally abused by teachers for speaking te reo. 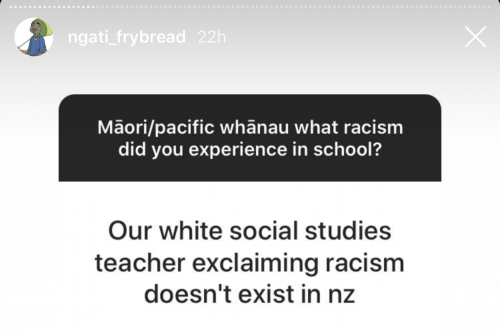 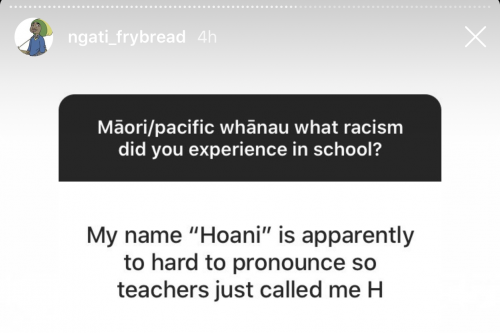 Education officials also believed Māori were only capable of working-class, labour-type jobs and not more intellectual pathways, an assumption reflected in the subjects that Māori were encouraged or even forced to take in school. In 1862, school inspector Henry Taylor wrote, “I do not advocate for the Natives under present circumstances a refined education or high mental culture: it would be inconsistent, if we take into account the position they are likely to hold for many years to come in the social scale, and inappropriate, if we remember that they are better calculated by nature to get their living by manual rather than by mental labour.”

Clearly, our education system has improved since, largely because of the Māori cultural renaissance instigated by people like Sir Apirana Ngata and Te Puea Hērangi in the early 20th century, and then later in the 1970s, where the renaissance really took off. But, according to Ngati Frybread, these stories recently shared through social media, along with the regular reports that point to the racism and disparity faced by POC students show, “there’s been no massive reformation, we have the same colonial system of education.”

“There’s a myth that colonisation and racism stopped in New Zealand,” they say, and these stories shared on their Instagram are proof that when it comes to racism and the ongoing impacts of colonisation, we most certainly have a long road ahead of us. 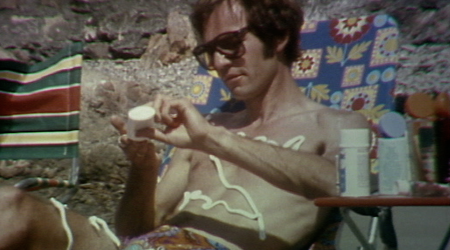