Brian Tamaki has spoken out after receiving a court summons for organising the mass gathering event at the Auckland Domain over the weekend.

It comes as police say a 63-year-old will be appearing at the Auckland District Court next Tuesday on charges which relate to breaching the Covid-19 Public Health Response Act 2020 and Alert Level 3 Order.

Police say the gathering of around 1000 people on Saturday was in breach of Alert Level 3 restrictions, which limit gatherings to weddings, funerals and tangihanga with no more than 10 people. 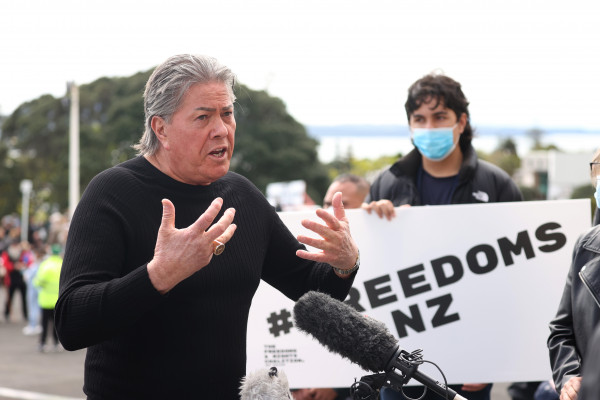 "Today, I had a visit from two officers from the New Zealand Police at my home informing me that I was to be charged with two offences under the ever-changing laws passed by the government now known as the Covid-19 Public Health Response (Alert Level Requirements) Order (No 12)," Tamaki says.

"I am charged on the basis that I organised a gathering in an outdoor place during Alert Level 3. I am prepared to stand up and be heard when I see injustice and suffering. I am certainly not afraid to do so on any occasion, let alone at this vital time. I will defend my involvement and my right to do so." 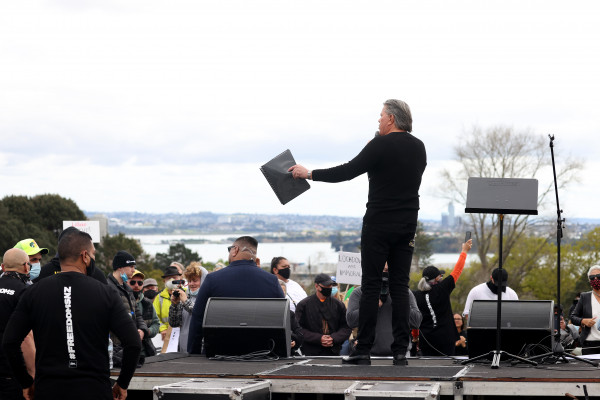 In the full statement Tamaki states he was standing up for the people against "damaging" lockdowns by organising the protest.

The investigation phase is continuing as police consider further charges or enforcement action against others involved in the event.

Police acknowledged that the taking place of this event was frustrating for the Auckland community and wanted to assure people that the police response on the day was planned and based on operational assessments "as is usual" for an event of that size.

Tamaki organised Saturday's protest at the Auckland Domain, which drew around 1000 people who protested the Government's lockdown measures.

Similar protests were held around the country the same day.

Tamaki told 1News he didn't believe the rally would lead to Covid-19 infections.

"It was a super meeting and I don't think we are going to see that at all," he said. "I think everybody loved it and it was a great day."

Since the protest, nearly 150,000 people have signed an online petition demanding Tamaki be charged and criticising the police response as “abysmal”.

Covid-19 Update: Vaccine certificates announced for the lead-up to summer

NZ has the highest trust in scientists out of 12 countries including the US, UK, and Australia.