Thousands of people gathered at Parliament today to protest vaccine mandates and lockdown. While many held banners about freedom or Covid, a surprisingly large number focussed on Nazi insignia, apartheid and Trump. The protest occurred as research, released today, showed New Zealand’s most recent Delta lockdown resulted in a sharp increase in Covid-19 disinformation related to far-right ideologies.

One anti-vax protester wore a star of David, hand-lettered with the words ‘unvaccinated’.

“It's actually just disgusting,” says Jewish Council spokesperson Juliet Moses. “I know Holocaust survivors, there are still Holocaust survivors in New Zealand - one of them still has the yellow star of David he was forced to wear. He was in a concentration camp.”

Anti-mandate protestors may be going through hardship, she says, and “may be without jobs or at risk of losing a job or feeling ostracised by society, but that is nothing on the level of Holocaust victims went through.”

Protestors have grabbed onto “the most horrendous form of human rights atrocity persecution they can think of... so they use that to make their point very dramatically.”

“They are choosing not to be vaccinated, and they are choosing to put these stars on themselves. And the irony is they are standing at a protest. If we were in a Nazi regime and they were Jews, they would not be able to stand around and protest.” 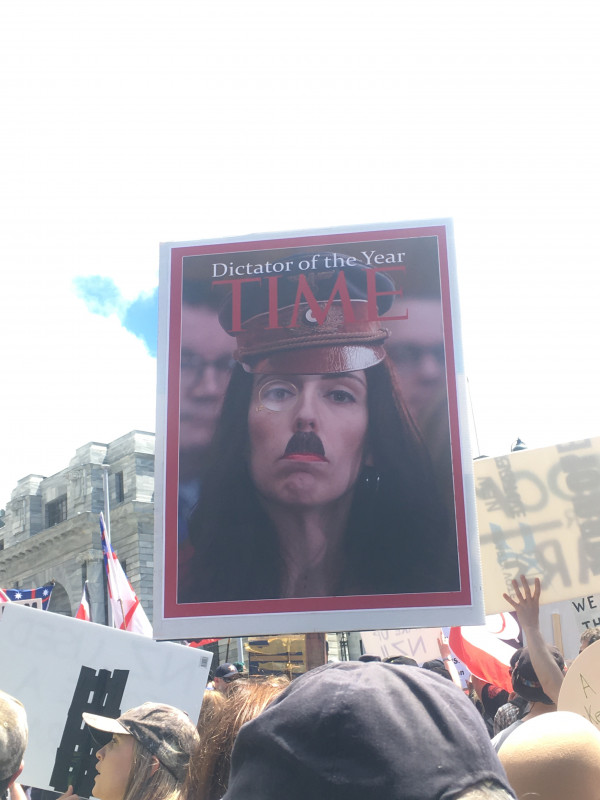 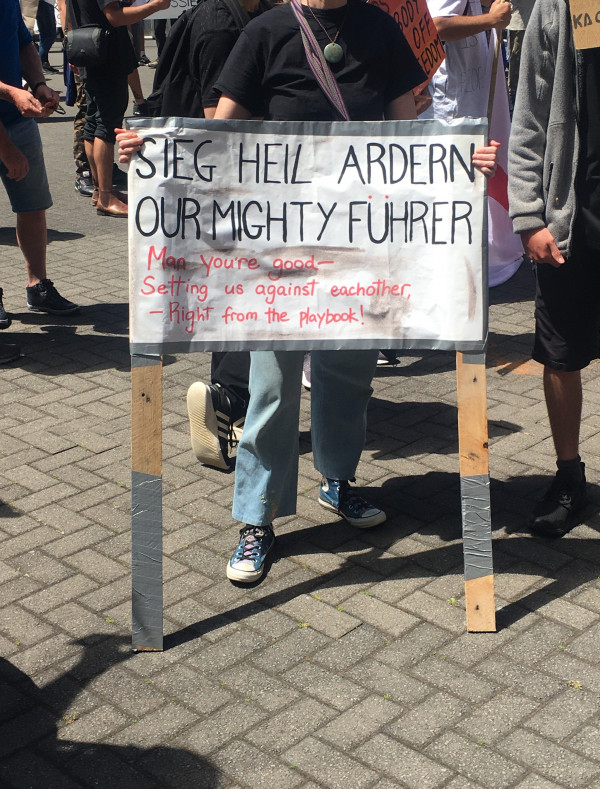 Disinformation researcher Kate Hannah says there has been a dramatic increase in online misinformation about Covid-19 in the last 12 weeks since New Zealand went into the Delta lockdown.

Nazi references are common “and have become increasingly so” since we went into Level 4 in August.

“We’ve seen over the course of the pandemic the increasing use of appropriated imagery from the Holocaust, and accusations of the government and state being Nazis and acting in Nazi ways.”

She says the content is purposely designed to make people feel under a huge amount of pressure, to feel a need to defend their family and loved ones, and to suggest there is “a group of people [the government] behaving in the worst possible way - they’re being Nazis”.

“That’s why we see the proliferation of that kind of imagery, it's used for its shock value and horror value, there is a sense of perversity.” 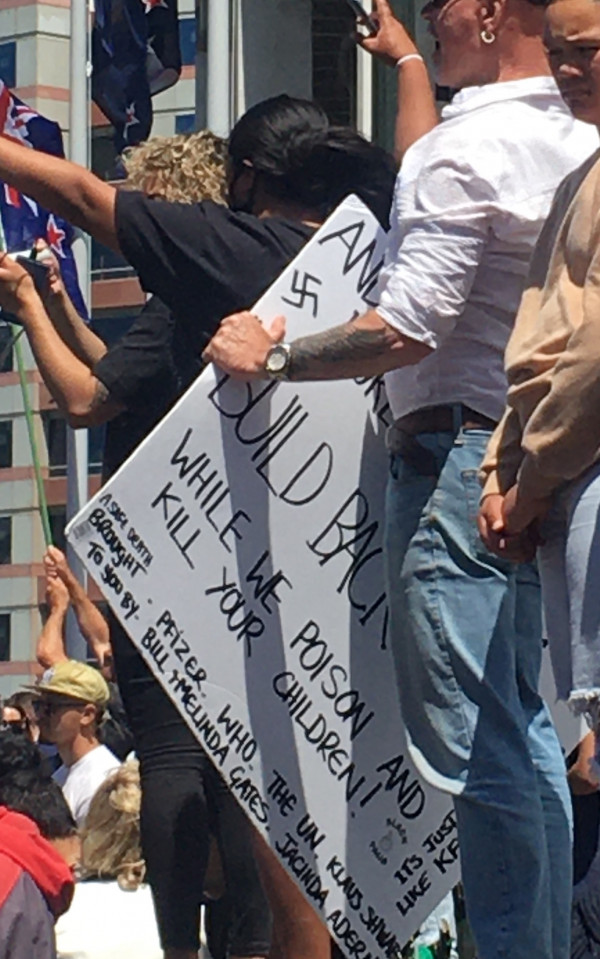 There is also a “hyper-focus” on the Nuremberg Code, an international code of ethics for medical professionals that emerged out of the Holocaust when Nazi doctors experimented on prisoners.

Kate says the Nuremberg Code, which has principles of voluntary consent and avoiding uneccesary suffering, has been conflated with the Nuremberg trials, which were military trials held after World War II where people, including Nazi doctors, were prosecuted for war crimes.

“What we’ve seen is the use of the Nuremberg trials and the hanging and execution of many of the Nazi leaders through a justice process at an international court. That imagery of hung Nazis and hung doctors has been quite visibly present in the data we’ve been reviewing, as have accusations of the government being Nazis.”

“What that does is create a real sense that there are criminals who need to be punished. And it creates a real sense of a clear and present danger, framed as a big sense of harm to children - ‘they're coming for our children’, so there is an impetus to act.”

Let’s talk about: Why the Covid-19 vaccine is safe even though it was made quickly 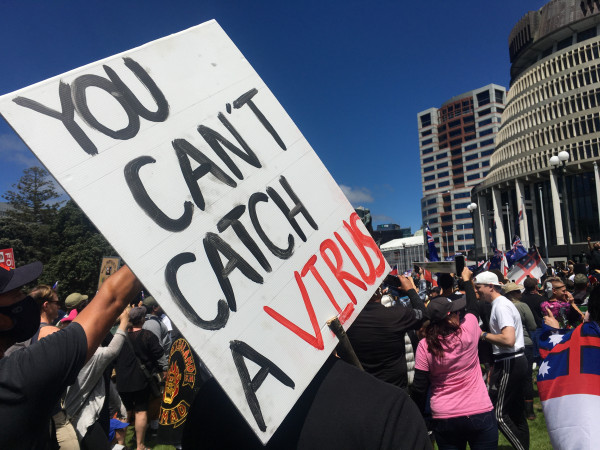 Kate leads The Disinformation Project, through Te Pūnaha Matatini, a research group hosted by the University of Auckland.

Today, they released new research that found since New Zealand went into our Delta lockdown on August 17 2021, there has been a “sharp increase in the popularity and intensity of Covid-19-specific disinformation and other forms of ‘dangerous speech’ and disinformation, related to far-right ideologies”.

The research found over the last 12 weeks, the amount of content, the number of platforms it is being shared on and the speed at which it is shared is “unprecedented”.

The researchers monitored public groups on sites including Facebook, Instagram, Twitter, and Telegram, which they say is the “platform of choice” for the spread of misinformation since the August lockdown. Telegram has become known for its lack of moderation and for not having policies about misinformation. 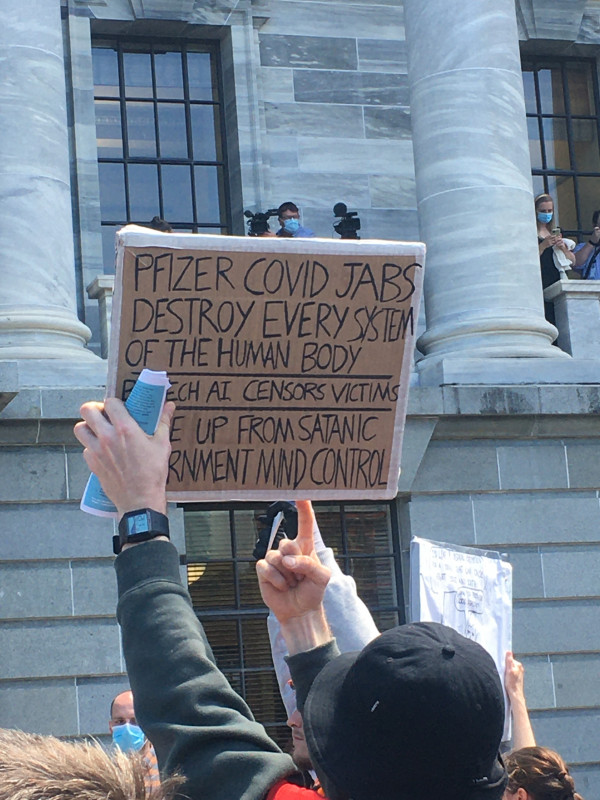 The Disinformation Project found the Covid-19 outbreak and vaccination have been used “to push various far-right and conservative ideologies around issues such as gun control, rural land rights and 1080.”

“While vaccination and Covid-19 remain the purported purpose of these groups, other motivations are becoming clearer… a conservative, sometimes faith-based identarian agenda which focuses on traditional family structures and gender roles.”

Kate says many of the people who are framing the government as Nazis actually hold views “that are much more aligned with Nazis than our centre-left Labour government has”.

This is what researchers term “accusation in the mirror”, where “people who hold quite right-wing and even white supremacist beliefs then accuse others of being Nazis, so it’s a flipped accusation”. 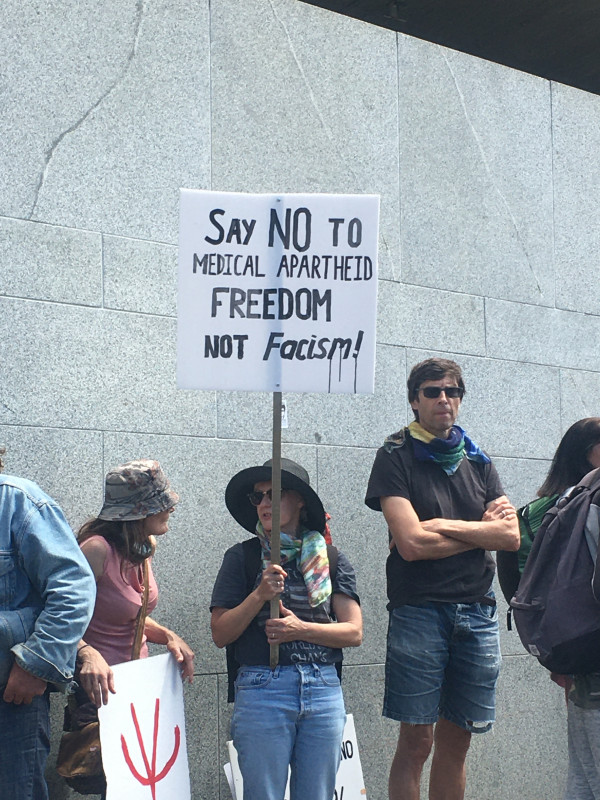 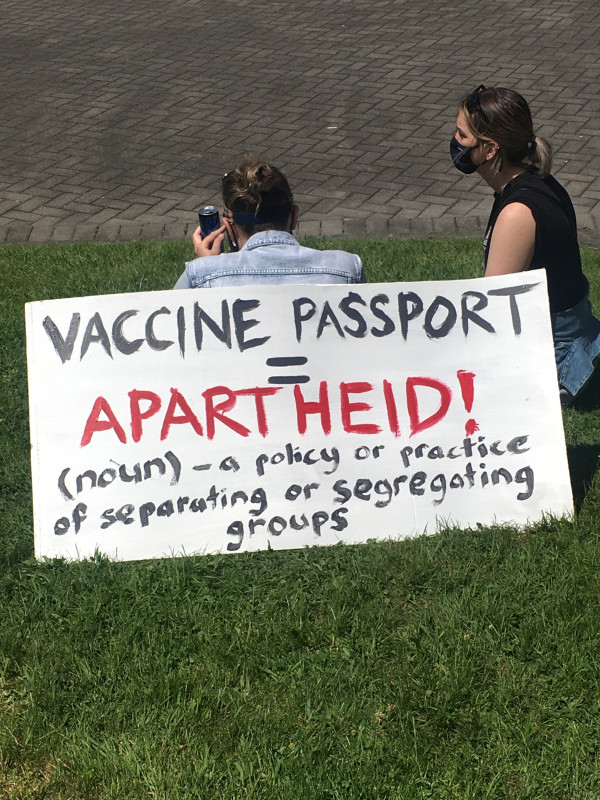 Kate says references to segregation and apartheid are very common among anti-vaccine or anti-mandate groups, an appropriation of Black struggle in the United States and South Africa.

Protestors say the vaccine mandate creates “medical apartheid”, where one group of society is discriminated against and not allowed to enter certain venues or services based on their vaccination status. 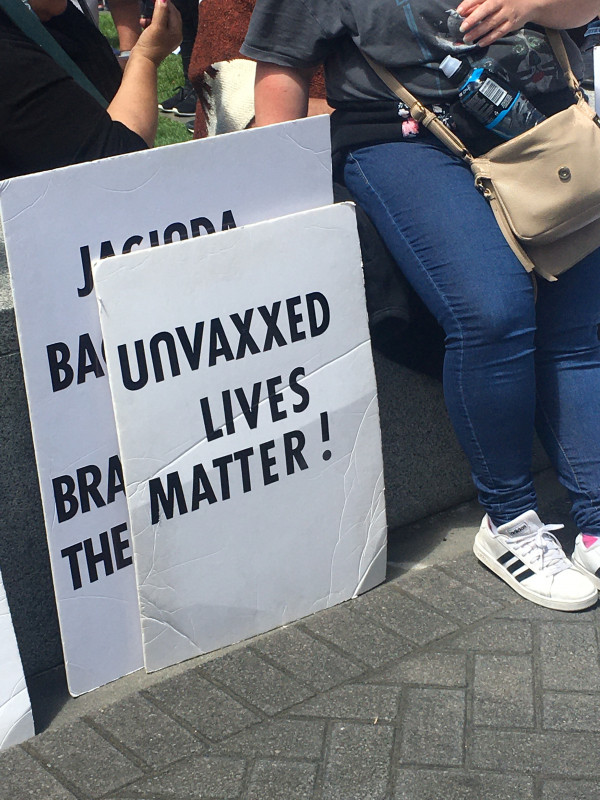 The Disinformation Project research found “mis- and disinformation is also particularly targeting and scapegoating already marginalised or vulnerable communities – for whom distrust of the state is the result of intergenerational trauma and lived experience of discrimination or harm, which can increase engagement with conspiratorial explanations and disinformation.”

“Those are genuine fears from people who have chosen not to be vaccinated,” Kate says. “We have to have some empathy - that must feel quite alien. But it's the same as putting your seatbelt on, or a helmet on a motorcycle, or drink driving laws. They’re public health measures. It’s a small sacrifice to keep everyone safe.” 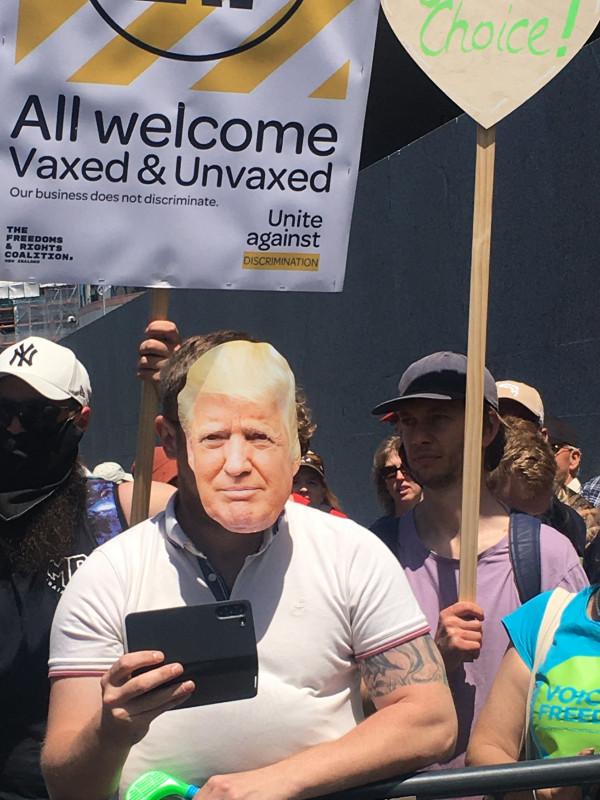 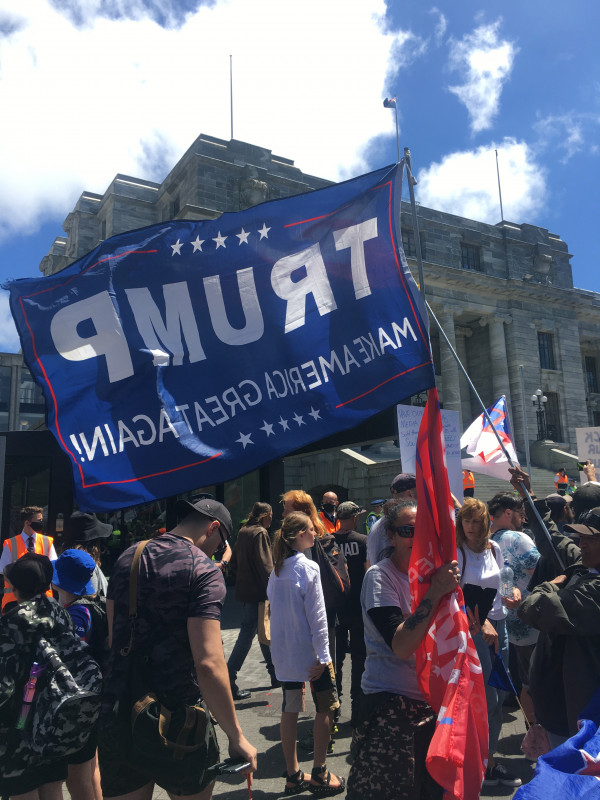 And what about the Trump flags?

The Disinformation Project found international content, particularly from the US and Australia, is being increasingly repackaged and re-shared in Aotearoa, “framing a state that is described as tyrannical, treacherous, and forsaking international and/or national law”.

Over the last 12 weeks, since our Delta lockdowns began, the researchers have seen a dramatic increase in US-based and Q-Anon content.

“We’re not surprised to see Trump insignia,” Kate says. “People use it as another social cue of upset, much like the Nazi insignia. It’s a social cue to piss people off.”

Why is there such an increase in this content now?

New Zealand is beginning to see conversations that have already taken place in other parts of the world, Kate says.

“People are really exhausted and tired and this is really scary. We know from decades of research that cults and conspiracy theories and extreme ideologies like that, people are more receptive to them when they are feeling alone, alienated, anxious and feeling like their life doesn't have much purpose.”

“We had a whole year of imagining that this terrible thing that was happening in the world had somehow skipped us, and that we could be the one country in the world that could remain unchanged. So in the last 12 weeks we've had a big jump.” 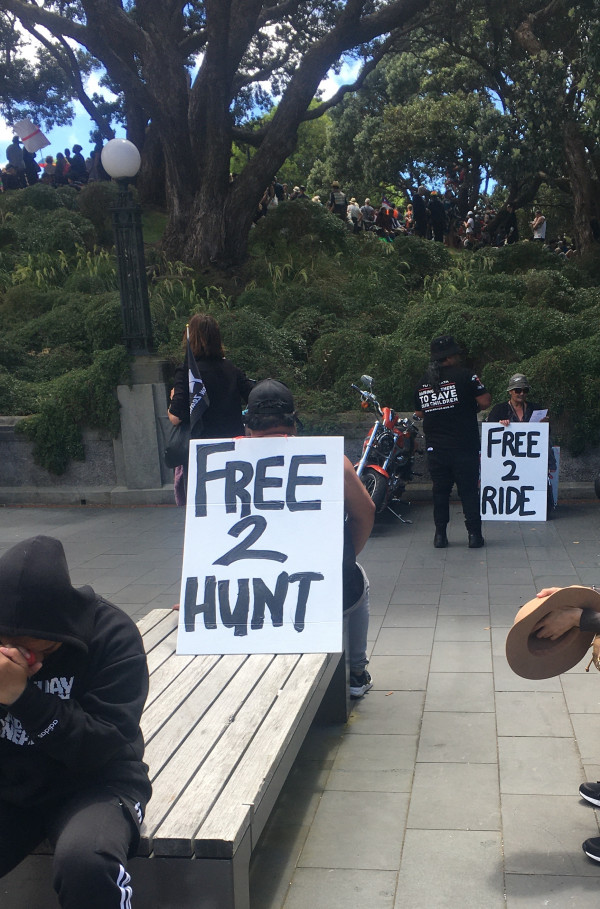 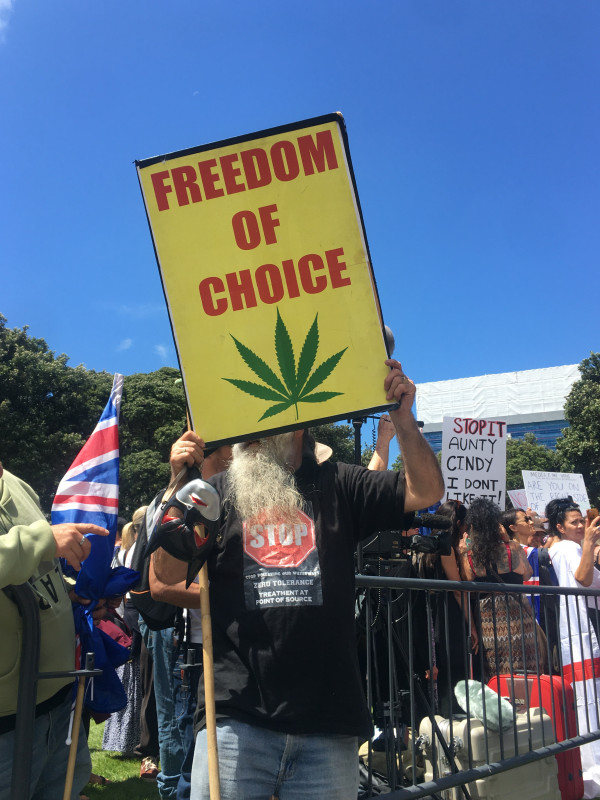 What brings all these disparate groups together?

The protest appeared to be made up of a hodge-podge of groups - wealthy-looking hippies, anti-1080, pro-cannabis, pro-hunting, Christians, people with signs about the Bill Gates agenda.

“So that's why you get lefty greenie no-vaccination homeschoolers partnering up with other ideologies.”

“A vaccine mandate is a carrying cry for all of that, it neatly sits there, it's about state mandating of individuals.”

But, she says, it’s an incredibly volatile space. “They don't share many other ways of doing things, or end games. The end game for someone who is a drop-out-of-society hippie might not be the same end game as someone who doesn't want their gun rights taken away.”

She mentions speakers from the Freedom and Rights coalition who demanded, as well as an end to mandatory vaccinations and vaccine certificates, that the whole country go to level 1 immediately and the removal of the Auckland border.

She says not all protestors, especially those on the moderate end like teachers who have not yet chosen to be vaccinated, will agree with all of those claims, “or the references to this being New Zealand’s 9/11 event”.

“If you are in a profession that is part of the vaccine mandates, from your perspective you may have every right to feel very upset, but people are capitalising on your fears for their own agendas.”

What should we do about it?

For those who feel worried about the large turnout of anti-vaxxers and Nazi sign-holders today, she says, keep it in context. “It was loud and noisy and scary, but nine out of ten New Zealanders have had their first vaccination.”

Let's talk about: Why most Covid cases aren't vaccinated

Let’s talk about: How effective is the Covid vaccine, really?

Let’s talk about: Will vaccines have long term effects?