“The government wants to drill for oil for 10 years and the IPCC makes it absolutely clear the planet’s on fire. Just no - don’t do that.”

It’s official. A group of university law students are waiting to hear back from the Government’s lawyers after initiating legal action over two new fossil fuel exploration permits in Taranaki.

Students for Climate Solutions filed a judicial review in the High Court at Wellington on Tuesday 9 November for a decision by Minister of Energy and Resources Megan Woods to grant two on-shore oil and gas exploration permits in Taranaki.

Awarded to Greymouth Gas Turangi and Riverside Energy in June, the permits allow each of the companies to explore two separate areas in Taranaki for oil and gas for up to 10 years. They were granted six months after the Government declared a climate emergency.

Lachlan Craig, co-director of Students for Climate Solutions, says new, on-shore permits for fossil fuel exploration don’t make any sense. In December, the Government declared a climate emergency and said it would make the public sector carbon neutral by 2025. It has also pledged to limit global warming to 1.5 degrees celsius, and in 2018, under the previous coalition government, put a stop to any new offshore exploration for oil and gas.

“There are big flaws in the decision making process,'' Lachlan says.

“The government wants to drill for oil for 10 years and the IPCC [Intergovernmental Panel on Climate Change] makes it absolutely clear the planet’s on fire. Just no - don’t do that.”

When asked about the pending case, Minister Woods declined to comment on it as it was “before the courts”.

“But these decisions should come as no surprise as they were announced in 2018 as part of our world leading ban on new offshore oil and gas exploration,” she said in a statement.

Lachlan says the ultimate aim of the legal action is to prevent the on-shore exploration in Taranaki.

Ideally, by reviewing the Government’s decision process, the Court will ask them to reverse the granting of the permits, or at least make amendments to the decision so exploration of new oil is prohibited, he says.

Since the request for judicial review was filed at the High Court, Students for Climate solutions and its fellow climate groups have received notification from Crown Law acknowledging it. Crown Law has about 20 working days to respond, after which the High Court will decide what the next action is.

‘We are not drowning, we are fighting’: powerful indigenous speeches from the global climate summit

Why our dairy cows produce more emissions than our cars

Assisted dying is now legal in NZ. New show 'The Pact' helps prepare us for that conversation 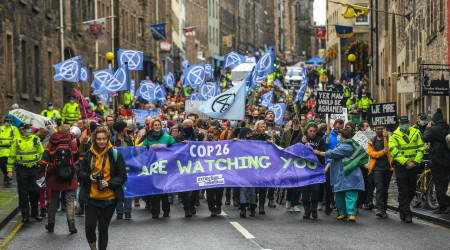