Arini Loader drops an armful of books on the table in front of us with a thud. Their spines are coloured in deep blacks and rich red (kōkōwai) that when stacked together evoke the Tino Rangatiratanga Māori flag.

These are a few key examples of history texts in Arini’s collection that capture the historical perspective of Māori. A perspective that although enshrined in these pages, the Victoria University of Wellington history lecturer says is woefully absent from the majority of New Zealand history books, and so the historical knowledge of much of our country. 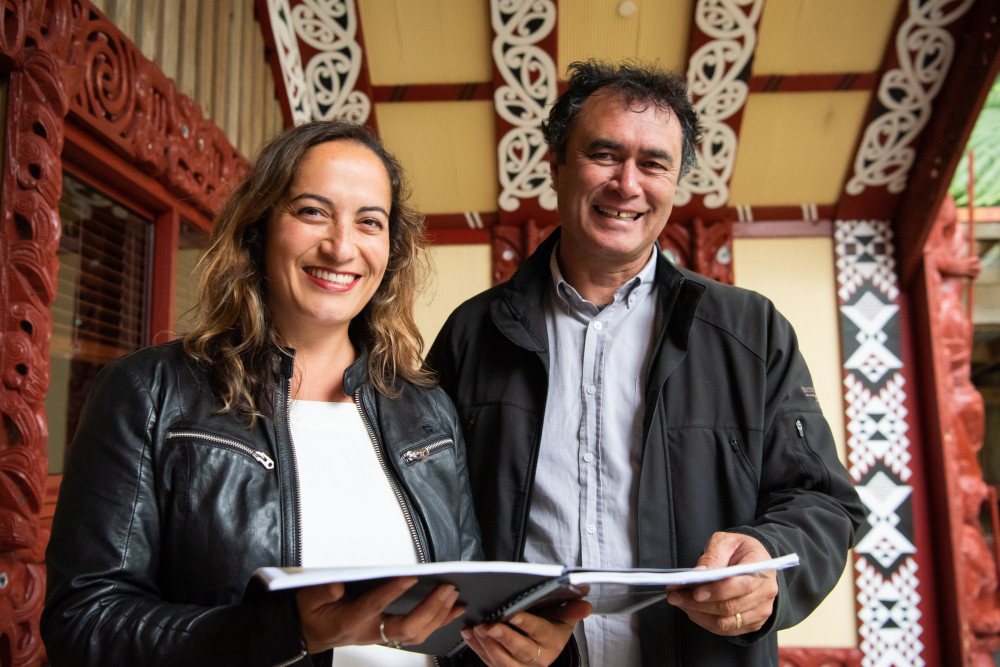 “It’s a gross imbalance. It’s not even an arguing point - everyone knows that imbalance is there,” Arini says, sitting in her office in the university’s history department.

A pretty striking example of this imbalance was demonstrated in 2016 when The Spinoff published its list of the ‘100 greatest works of New Zealand Non-Fiction’, and included only two titles by or about Māori - one of which was, controversially, the Treaty of Waitangi. The Spinoff corrected this by releasing a follow-up article article highlighting the 50 best non-fiction works about or by Māori - but the initial omission reveals something pretty startling about the state of our national literary discourse.

Historians like Arini are working to not only produce Māori history texts, but to make sure they are read and understood by New Zealand as a whole. As a stark reminder of the importance of her work, on a corkboard behind her desk sits a picture of chains, headed by the Maya Angelou quote:

“History, despite its wrenching pain, cannot be unlived, but if faced with courage, need not be lived again.” 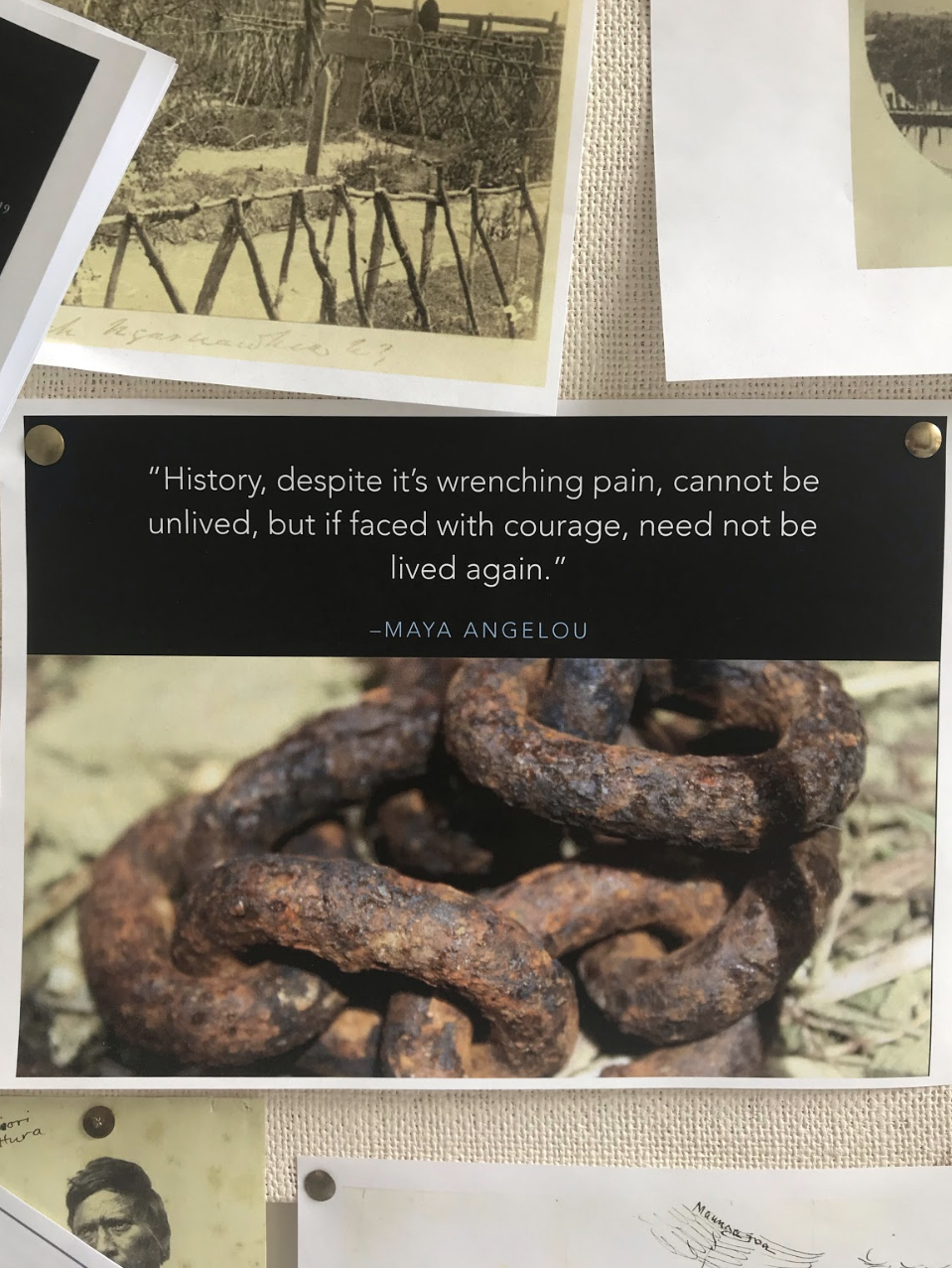 One by one, Arini places Māori history texts across the desk - Huia Histories of Māori, edited by Danny Keenan, and the latest issue of Te Pouhere Kōrero. Finally, she reaches the illustrated version of Tangata Whenua, a beautiful book with a cover featuring faces of notable Māori from throughout history, written by renowned historians Atholl Anderson, Aroha Harris, and Judith Binney.

“The problem is, alongside a book like Tangata Whenua on the shelf is often 30 other texts written by [Pākehā authors].

“It is very similar to population swamping, which happened in the 1870s and 80s in New Zealand - a move made to seal the deal of British dominion.”

“Now, we have intellectual swamping. We have historical swamping of one particular kind of voice - Pākehā, and usually male as well.”

“When Māori books end up being a minority on the bookshelf, it becomes a challenge of imbalance.”

Arini points out that it is not simply a case of the racial background of a historian, but what their priorities are in including Māori perspectives in their reconstruction of our nation's history. Arini notes that Binney - a Pākehā born in Australia - was an incredibly respected New Zealand historian who wrote extensively on Māori history and perspectives.

“Judith Binney talked really well about this,” says Arini. “Throughout her work she talked about Pākehā written texts, versus Māori [historical] narratives.

“One of the points she made is that one of those has been deliberately repressed. Meaning that Pākehā written texts have come to be ‘the histories’ in the minds of people.”

How our history is framed in the minds of the New Zealand people has been a contentious topic this year, especially in regards to the Tuia 250 commemoration currently taking place - with a replica of Captain Cook’s ship, The Endeavour, recreating its first arrival and journey throughout New Zealand 250 years ago. Some, including the Ministry for Culture and Heritage who organised the event, have framed this as a recreation of the ‘encounters’ of Māori and Cook’s crew. While others say that ‘encounters’ is a soft way to describe what could be seen as the start of an invasion. On TV3’s The Hui, Waikato University academic Arama Rata called the Tuia Endeavour  "a replica death ship" arriving to "re-enact the invasion of Māori whenua".

This illustrates how just one word can change the way we frame and consider the events of the past.

“We need to be careful, or should I say deliberate, with the language we use,” Arini says. “Another good example is where people talk about Māori land loss.

“We didn’t lose land - we didn’t ‘misplace’ our land or resources. It was theft, land theft is what we are talking about. We all know that, but we still manage to do create this cognitive dissonance by calling it land loss.”

Arini says at best this kind of language confuses what we are talking about, and at worst it “deliberately misconstrues or creates another myth for another generation to unpack”.

“The way our history is at the moment, it isn’t Euro-centric or unbalanced, it is just racist.

“In heaps of New Zealand history, Māori are not even present,” Arini says. “If we are, we might be cartoon characters - caricatures -, we might just be names on a page. But we don’t see ourselves in those people, because that is not how we see or talk about ourselves.”

“If all you see is history through another person’s eyes, then it is not your history.”

There are far fewer written records available in the public domain (Archives NZ, libraries, etc) which give Māori perspectives and were created by Māori, Arini says. Yet, there are a lot more than people realise. One of the key issues is language. Much of this material is written in te reo Māori which means that access is restricted to te reo speakers (of any cultural background, Māori, Pākehā, etc). These documents look quite different to the kinds of Government documents and records that can often be the basis of more traditional history texts.

Arini’s latest project is a great example of this. Along with Dr Mike Ross, a Māori language and customs lecturer at Victoria, she has made a short film called E Whiti E Te Raa: Shine. The film is based on a vast collection of waiata that Māori prisoners documented after being held captive at the battle of Rangiriri in November 1863.

“We are working with a manuscript of 230 waiata, song texts, sung poetry, mōteatea. People today don’t often reach for a book of poetry as a source of writing or thinking about history. But, that is one of the ways in which our people talked about topical events, it is how they felt about what was happening.”

They are not only emotive records, Arini says, but also include details on specific events, people, and places.

“They are rich historical records, cultural records and windows into how our people felt to what was happening around them, in the worlds they fully inhabited. Love, loss, war, death, birth, gardening, fishing, adventuring, travelling and everything in between.”

“We need to be able to shift our minds to imagine that that is a historical narrative. That it is something we could be teaching in schools, more than just a text that outlines ‘This is Captain Cook… he was born here… he did this… came here on this date…’, that kind of narrative.”

However, despite there being ample historical documents illustrating the Māori perspective throughout the last 250 years of New Zealand history, there are still challenges in not only having those documents compiled into history texts, but then also in how that knowledge is disseminated to the wider New Zealand people.

One of these challenges has been the politics of publishing - who decides which historical perspectives will be published, and so which information becomes much better protected and enshrined in our national knowledge base.

“If a book is published, it becomes more easily available - depending, of course, on how well distributed it is. These become the resources that travel around the world and are taught in our education system.”

This has not historically been the case, with a huge amount of documents written by Māori never having been published. Arini says from early in the 19th century Māori people began writing down oral histories. But, because these histories were written in te reo, they were not published and in many cases have still not been.

However, even these records written by Māori people are inconsistent, due to the continual interruption of conflicts and periods of upheaval caused by settlers.

An example of this, Arini says, is the Māori language press which was gifted by the Austrian Emperor Franz Josef to two Waikato men in 1859. Wiremu Toetoe, from Rangiaowhia near Te Awamutu in Waikato, was chief of the Ngāti Apakura and Ngāti Wakohike tribes. Toetoe and  his young companion Te Hemara Rerehau Paraone voyaged across the world to Vienna where they spent nine months as apprentices in the Imperial Printing Works before travelling around Europe and having audiences with the British Monarch.

“They then came home with the printing press. But, what they came home to was the eruption of war,” Arini says.

Wiremu and Te Hemara Rerehau Paraone used the press to create the te reo newspaper - Te Hokioi o Niu Tireni e Rere atu na. They produced about 13 issues talking about the King movement - the Kīngitanga - sharing their thoughts on what was going on, and commenting on the political situation, and ongoing conflict of the Land Wars.

“But, when the invasion hits Waikato, survival becomes key and so the press is abandoned.”

Having the time, resources and stability to be a historian or journalist, requires a level of privilege that Māori people have not been afforded throughout many periods of colonial history, Arini says.

“[As a result], through the 1860s and 70s, through those decades of conflict, most of the history we have from that time is heavily from European sources.”

That trend has not changed. Today, only about five percent of academic staff in New Zealand’s universities are Māori.

All of these factors - the inability of Māori to dedicate themselves to academia due to conflict, the difficulty of publication when they have, and the resultant swamping of our historical narrative by Pākehā writers - these are just a few of the roadblocks that have led to the imbalanced, Eurocentric approach we have to our history in New Zealand.

However, despite this, Arini speaks with a guarded optimism when she speaks about the future of Māori in historical discourse going forward.

One of these things could be the introduction of more comprehensive New Zealand history education into school, but Arini warns that even the success of that is dependent on many factors - including how we are going to train our teachers, how much time and resources will be dedicated to these courses, and which texts are chosen to be taught.

More than anything though, Arini emphasises that the repair of our historical narrative is dependant on a fundamental shift in the colonised structures of our country at every level, and an acceptance of the actions of our colonial past that words like ‘land loss’ and ‘encounters’ attempt to shroud.

“If we are going to get ourselves out from that, we need to do some serious work on ourselves.”

“Wouldn’t it be interesting if settlers and now Pākehā could own [our history], and say ‘You know what? We stole this land. We stole the land where my house is sitting on. We stole these resources - these rivers, lakes, oceans.

This article is a part of our new series Rediscovering Aotearoa: a decolonisation series. Watch our short documentary on Mātauranga | Knowledge here and listen to our podcast here.