By Anna Harcourt and Sam Duckor-Jones

Sam Duckor-Jones is an artist, poet and writer, whose current project is Gloria of Greymouth — a deconsecrated Anglican church he’s turned into a bright pink celebration of queer joy in Greymouth, a town of 14,000 on the South Island’s West Coast.

Re: head of content Anna Harcourt talked to him about it. Photos: Sam Duckor-Jones

This story is part of Re:’s Belief Week. From young people who are celibate, to New Zealand’s first Wicca church, we take a look at what belief, religion and spirituality mean today. Check out the rest of the stories here.

Who is Gloria of Greymouth?

It’s a glowing house of queer worship, where gays across the nation can come and bask in the spirit of campness and glitter and be silly.

It’s also an immersive sculpture, so you come in and you’re in a piece of art.

She had been deconsecrated in 2018, and no one was using her, and then I’ve come along and reconsecrated her, and I painted her pink, top to bottom. 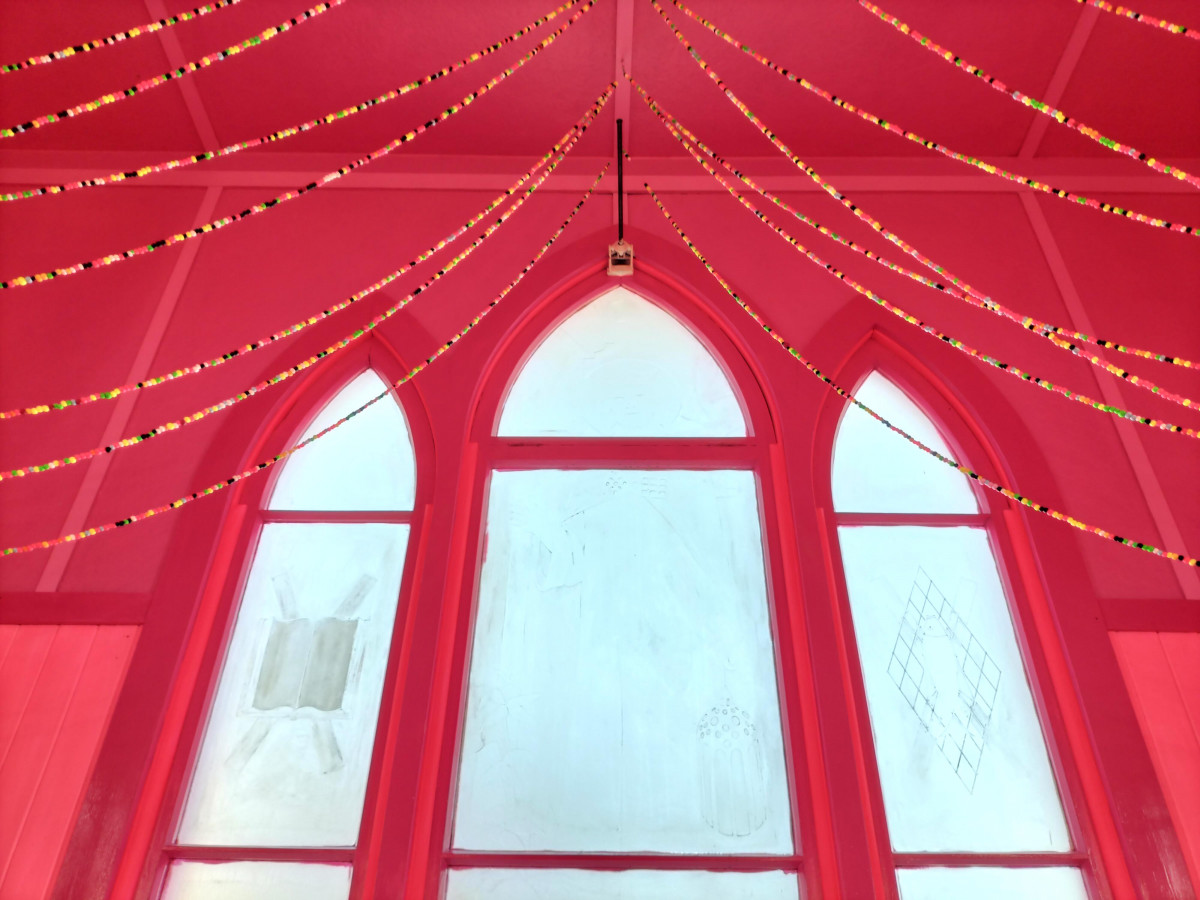 A view of the church windows. Photo: Sam Duckor-Jones.

Can you give me a brief history of the church?

It was built in 1938, formerly known as St Andrew’s Anglican Church.

The wonderful thing is, because it's a small community, and the church is the largest building in this suburb of Blaketown, people feel connected to the building and feel curious and stop by and give me little bits of history.

An old guy came by on his mobility scooter and told me about his dad who built it, and then somebody sent me an email saying she'd love to visit because her grandmother or great grandmother had a child, and the child died and then she decided to found this church, so she paid for it to be built in that child's memory. 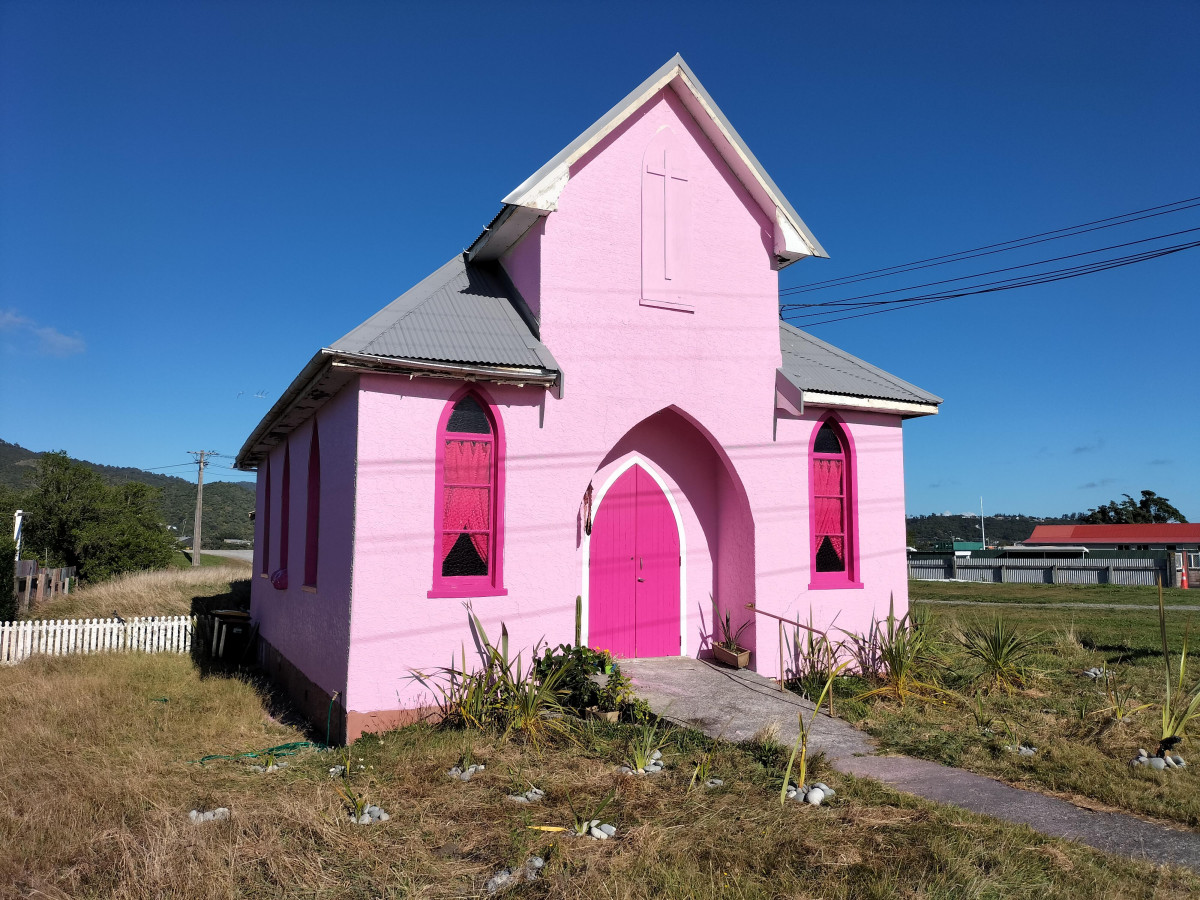 Gloria of Greymouth sits in the suburb of Blaketown, on the West Coast of the South Island. Photo: Sam Duckor-Jones.

Why was it up for sale?

The population is dwindling, and it’s definitely an older population in Greymouth — that's quite apparent when you're walking to the shops — and the building has no plumbing or heating.

Maybe that was okay in 1938 but we require a few more creature comforts these days.

Where did the idea come from? Had you always dreamt of a pink church, or did you just see the ‘for sale’ ad and get a vision?

I lived for a long time in the Wairarapa, and when I was leaving, I had this party and just started tagging the house and it was so fun, and I thought, ‘why did I not just do this right at the beginning, so I could live in this painted space?’

So I decided the next place I lived in, I would paint top to bottom in these outrageous colours.

On TradeMe, I looked for the cheapest house in New Zealand, and this came up.

I'm not interested in regular old home ownership. One — I can't afford it, and two — all that maintenance.

I don't need a kitchen or a hall or a spare bedroom, it's just me, so I thought, I will just be silly in the crumbly old building, it'll be fun. 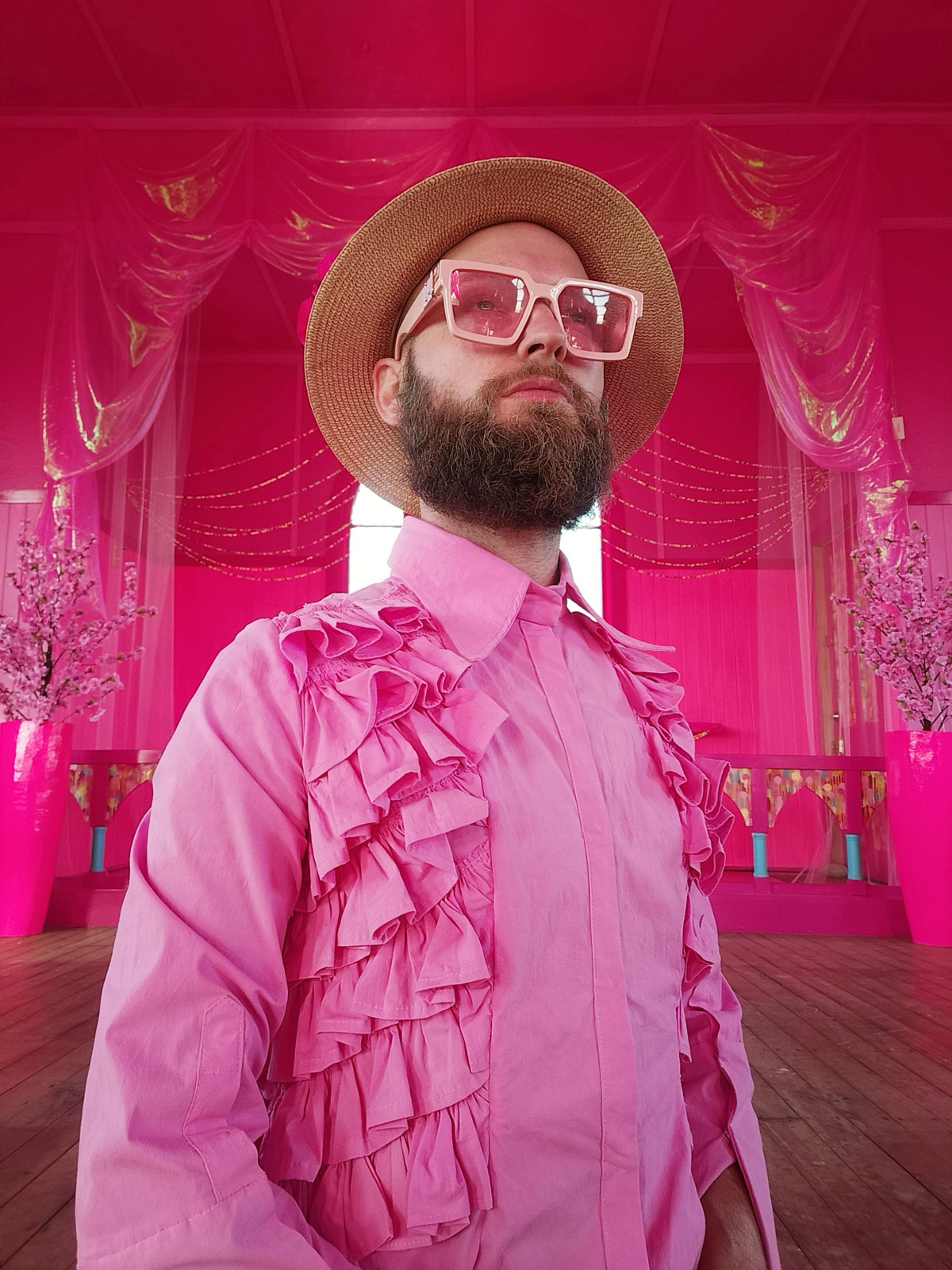 Where did the name Gloria come from?

I always liked the name Gloria for its inherent campness — maybe because of Gloria Gaynor, or Patti Smith.

There’s also an imaginary character that my brother and I had when we were little called Gloria, who was a troubled girl who just wanted friends.

Her mother was this celebrity, and Gloria was kind of scrawny and hopeless.

And so maybe Gloria made it in the end.

Maybe she turned out okay, so it's a bit of an homage to her.

I've always had a crush on the West Coast, the scenery is so fabulous and dramatic and I couldn't afford to live in Wellington, my hometown, any more, so I looked further afield and this church popped up, and I thought well, here’s my opportunity to live my West Coast dream. 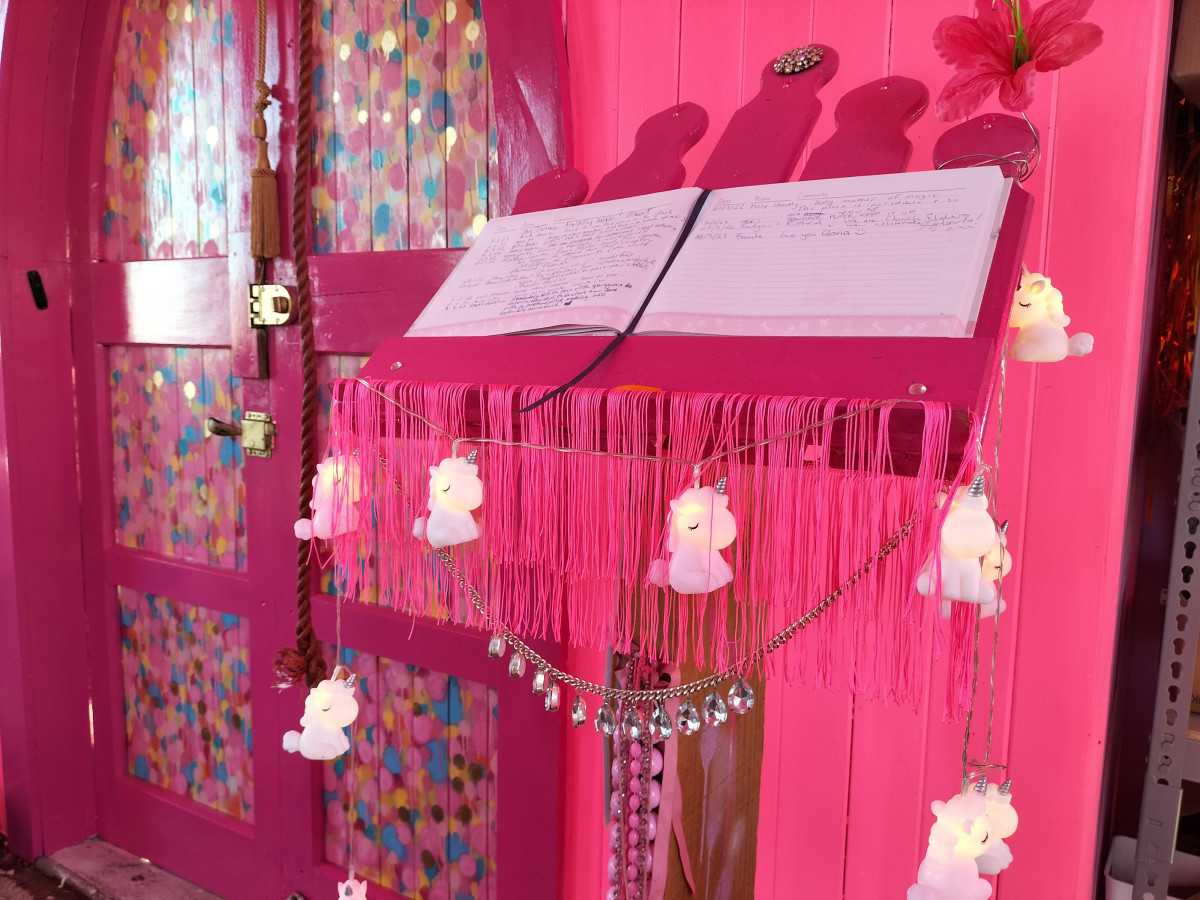 “I do like rituals,” says Sam. Photo: Sam Duckor-Jones.

My perception of the West Coast is that it’s very grey, cold and conservative. It’s the last place I would think to open a queer arts space. Have you found a culture clash?

Well that was my idea of the coast too — cold and grey and conservative.

It is another world, and my liberal bubble that I've existed in my whole life in Wellington has been popped for sure.

I have met people who have political views that I find a bit troubling but despite that everyone is a real sweetheart.

It's been overwhelming the friendliness and openness that people have for my project, there's a lot of support which I'm really humbled by and happily surprised by.

And as for the weather, it's hot and humid!

It’s barely rained and every day is sunshine. Although all the locals are as surprised as I am, I think it's a pretty unusual summer that's going on here at the moment.

And there are three rainbow youth groups in Greymouth, so you know, we exist everywhere. 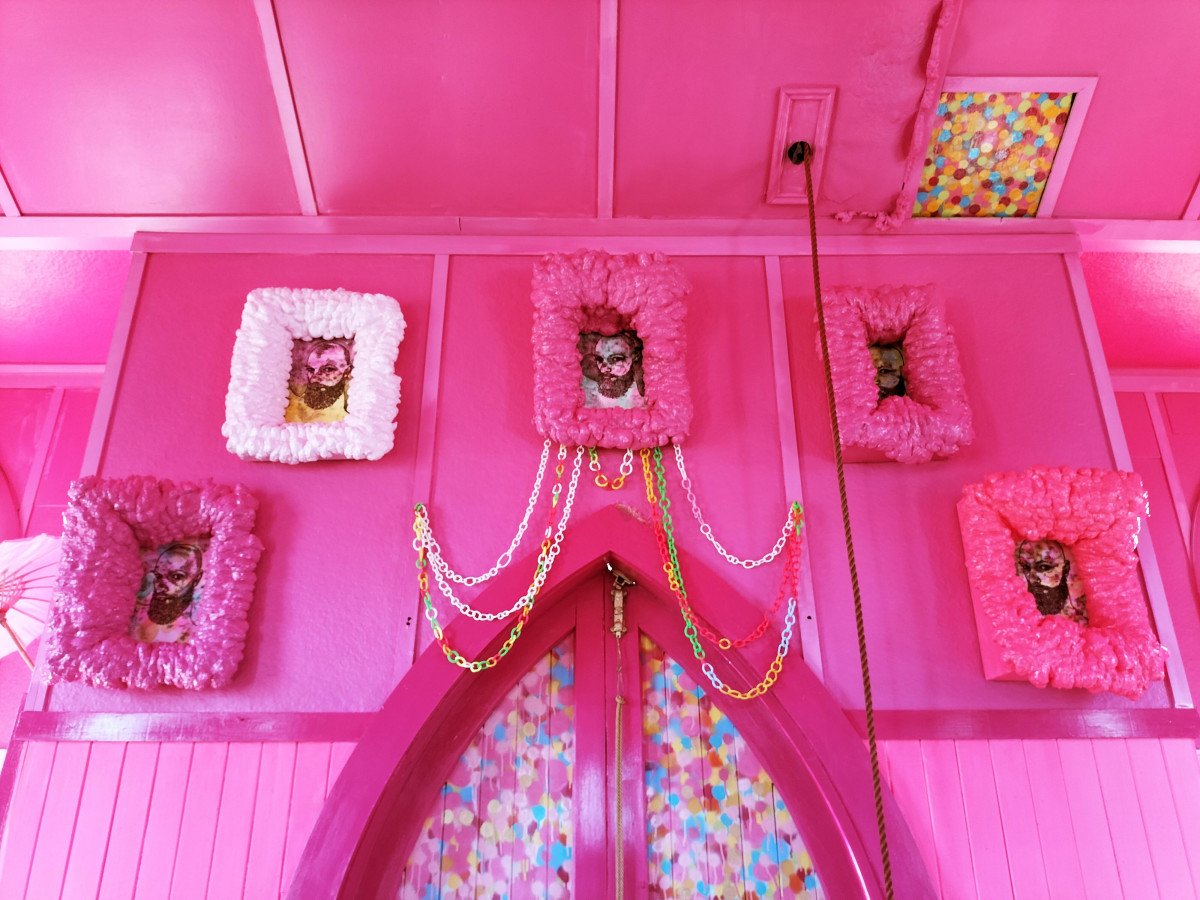 Do you feel like, for young queer people in small towns along the West Coast, you’ve been able to show that you can be a cool queer adult who lives Greymouth and that there’s a future here?

I didn't realise that was going to be part of the manifesto when I began, but it's sort of turned into one of the leading tenets of the cult.

I like small towns, and I think it would be lovely if queer people felt comfortable and empowered to stay in small towns, or move to small towns.

I understand why queer people escape to larger centres, but it would be lovely if queer people could flourish in small towns too. 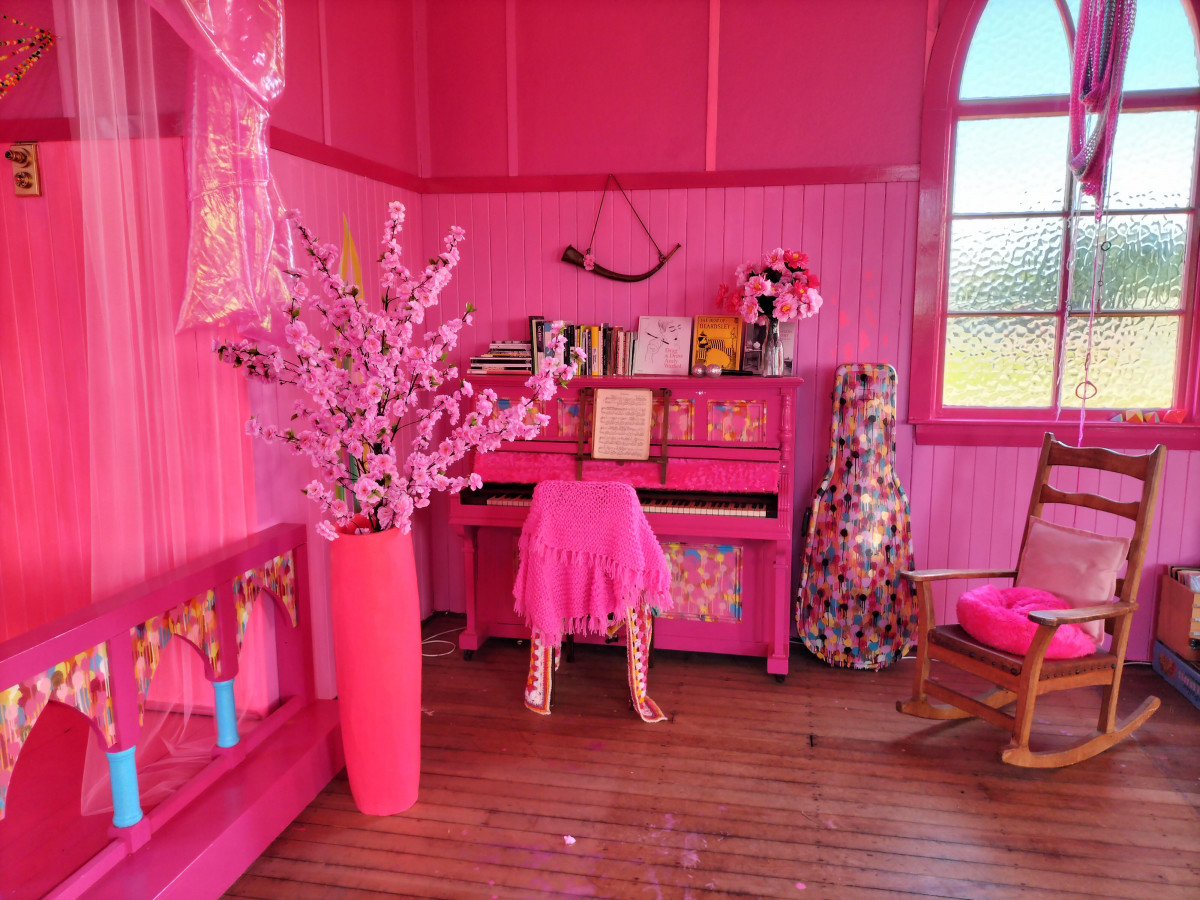 Have you had a favourite moment where an unexpected person has been supportive?

They happen most days … [it’s] people who you wouldn't expect — gruff old guys saying the building is looking fabulous.

Something really nice I’ve seen on your Instagram is you talking about local elders who have donated things to the church. I assume by that you mean queer elders - what responses have you had from older queer people on the West Coast.

Elder is any person who contributes anything to Gloria, because people do contribute things all the time. People drop off furniture or plants and they help me paint stuff.

It's wonderful and everyone who does that, I make them a church elder. I draw a picture of them and put them into the file, so people can flick through and see who all the other church elders are.

As far as other queer people on the coast, I haven’t seen a lot of older ones. I guess the older ones went away. But the younger ones have been really excited by it. 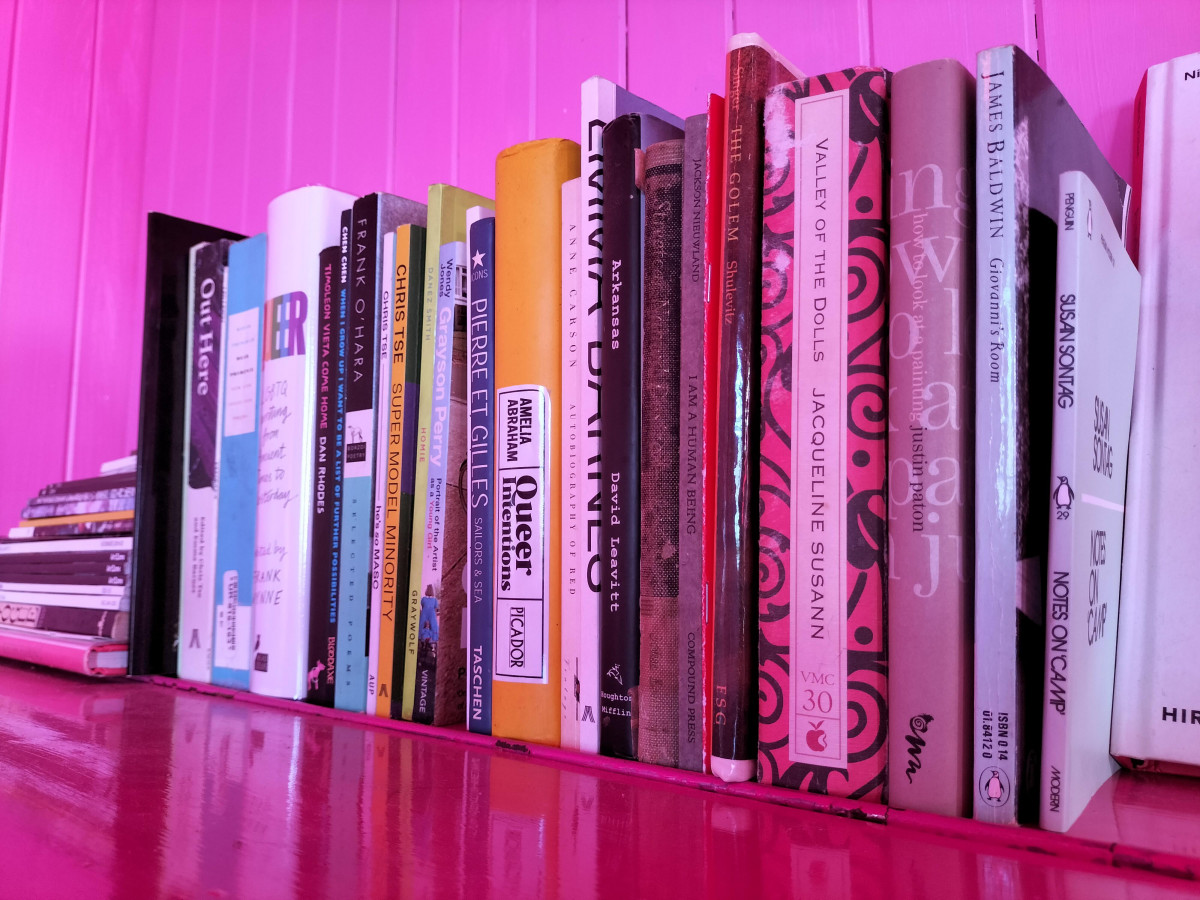 Some of the books sitting on top of the pink piano. Photo: Sam Duckor-Jones.

How has creating Gloria of Greymouth changed you?

I definitely have hermit tendencies but I'm not able to indulge in those tendencies with Gloria because people are always knocking on the door.

She's such a loud presence in this quiet little corner of the world, so I have had to pack up these hermit tendencies and put them away, and that's actually really nice to have been forced into that space.

I am living my queerness a little bit more on my sleeve instead of in my back pocket.

In terms of the logistics, you said there’s no water or heating — do you live inside Gloria, and what’s that like?

Yeah I do live inside, I've turned one corner of her into my living quarters, I've just got a single bed and a desk, and I've got a hot plate and a kettle and a toaster, because I do have electricity.

And I put up a garden shed outside with a toilet and a tap.

But the art project will eventually push me out and I'll have to find new accommodation and maybe a wealthy person will buy Gloria. 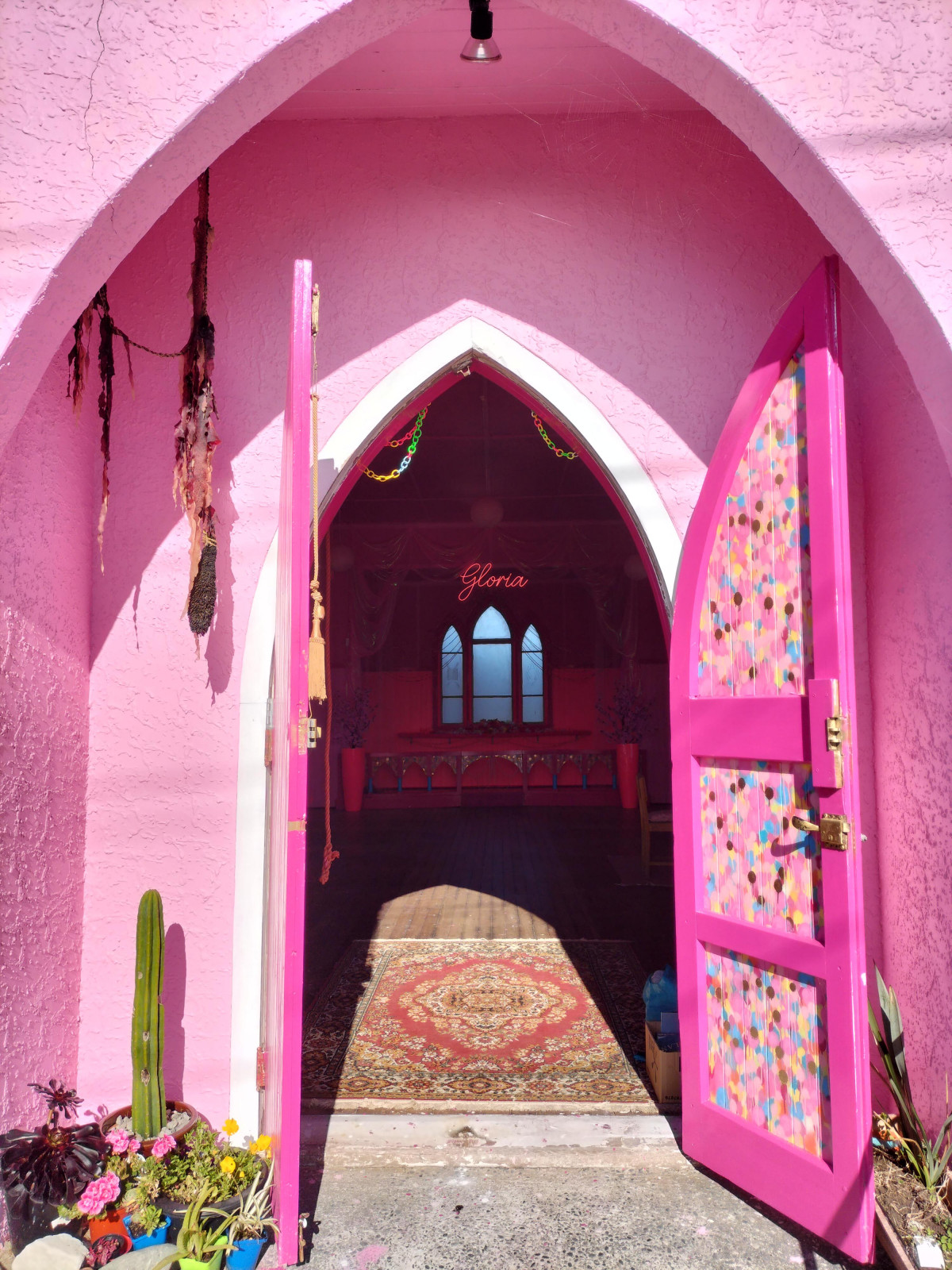 Sam lives inside the church, with a bed and a tiny kitchen in one corner. Photo: Sam Duckor-Jones.

How does it feel living inside a church?

Oh I love it, I love it so much — the light in the mornings to wake me up, the high ceilings. It’s surreal and dreamlike.

Also because I'm by myself. If I was living with another person it would get tiring because you couldn't hide from each other. 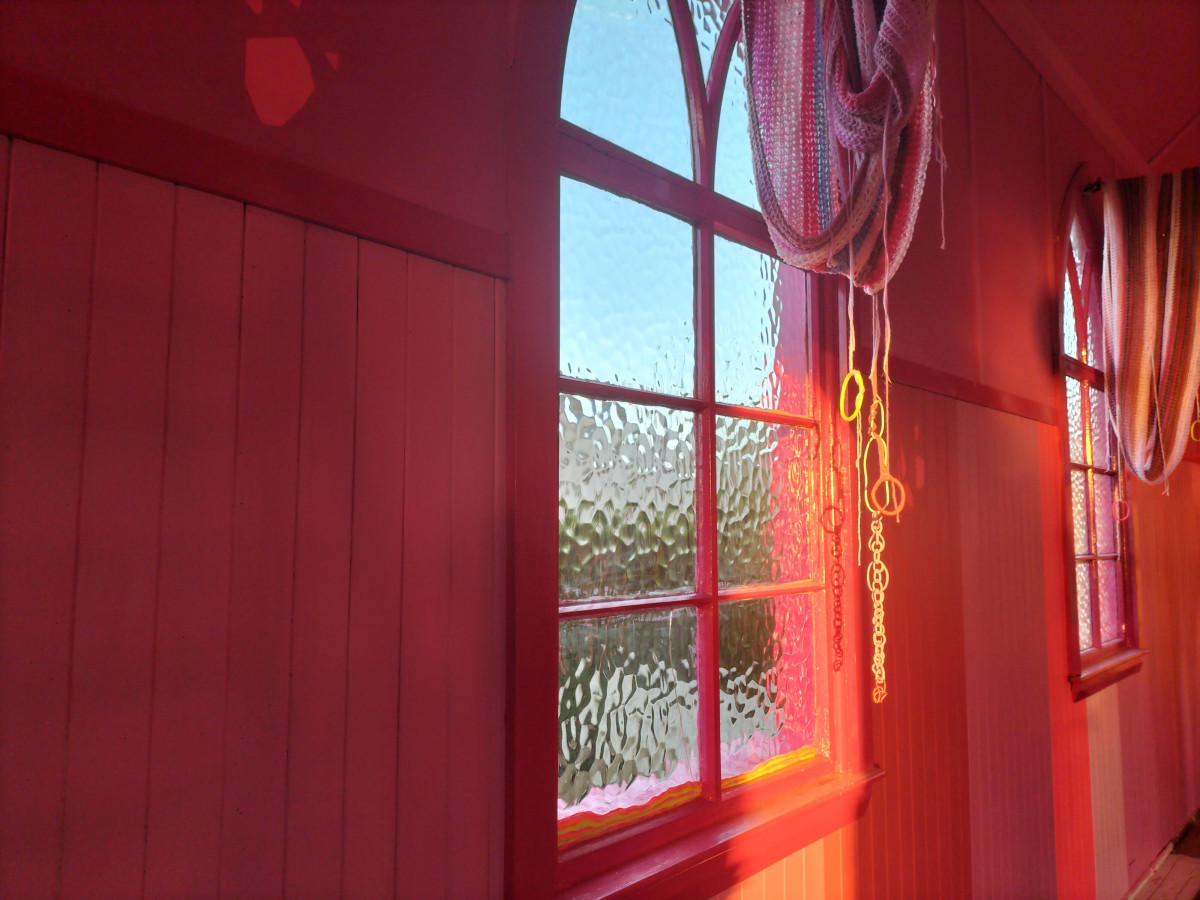 All of the opening mechanisms for the windows are broken, so Sam has crocheted new ones and then hung loops off the tendrils. Photo: Sam Duckor-Jones.

What’s your own personal connection to religion or spirituality?

I don't really know anything about the Christian church except for the very basics — it involves Jesus, I think?

I am Jewish, and Gloria has a mezuzah — a tiny little box that sits on the doorframe of a Jewish house, and it's got a little prayer tucked inside, like ‘bless this house’.

Some people when they walk through the door will touch it. It's just nice to know that it’s there.

I'm not a god-fearing person at all, I'm not that kind of religious person, but I do like rituals.

That's what I bring from my own personal religious background to Gloria, is an interest in rituals. 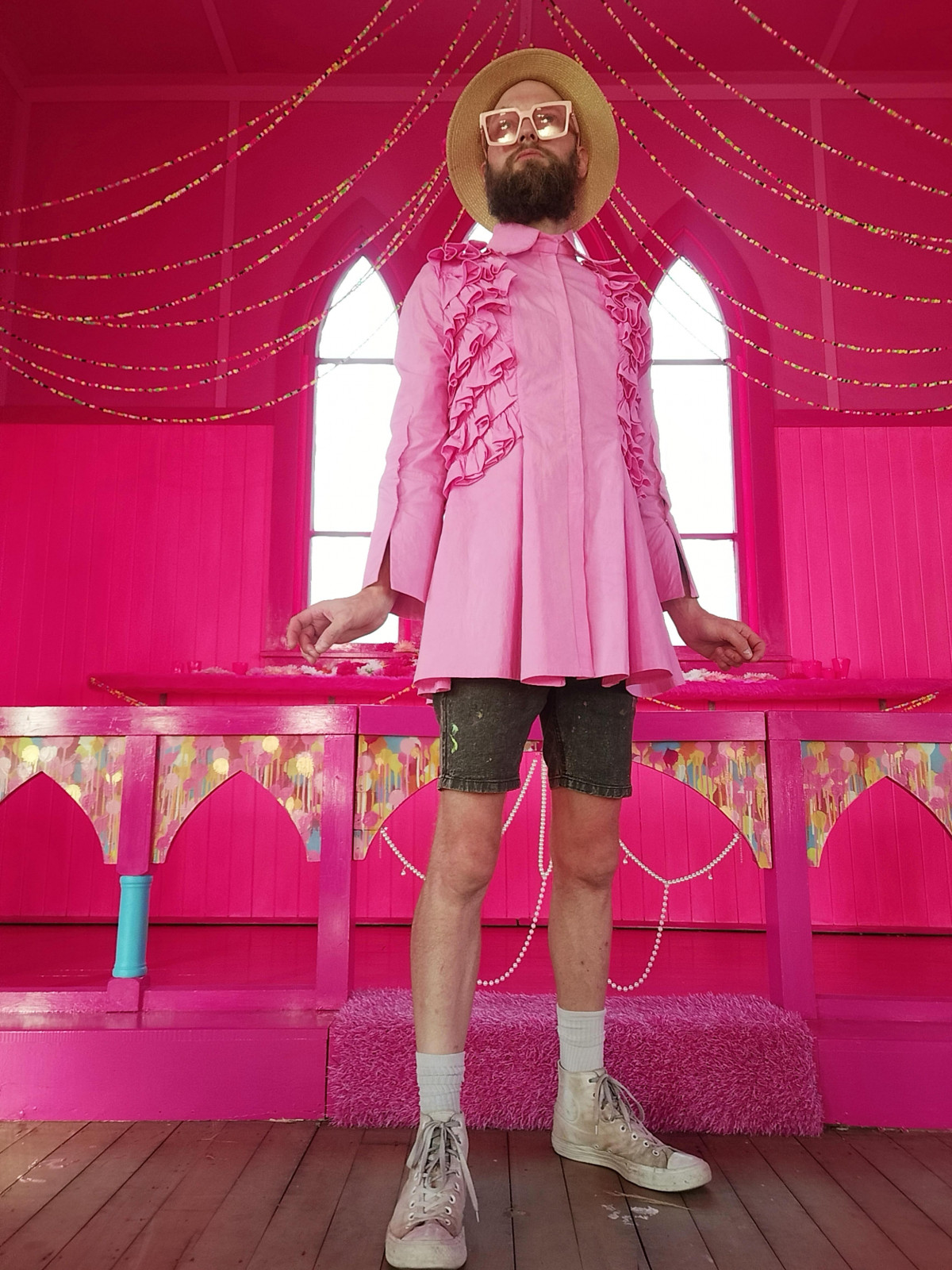 “I am living my queerness a little bit more on my sleeve instead of in my back pocket.” Photo: Sam Duckor-Jones.

A big part of it is to build a new congregation of sculpted paper mache parishioners, who are two-metre tall giants that are all worshipping inside Gloria. There will be about 30 of them.

And then it's done.

It’s just a public sculpture that people can visit and look at, or they can participate, do a poetry reading, or do a dance.

I want people to tell stories here and have little dance parties and dress up parties and just come to Gloria and be silly and outrageous.

What do you hope for in the future?

I would love it if people decided that they were going to paint their house fluorescent yellow or bright orange, instead of grey or white. I think that would be lovely.

Art doesn't just have to be something you visit in a gallery, it can be your whole living space.

Why not turn everything you can into a sculpture? Go forth and be silly. 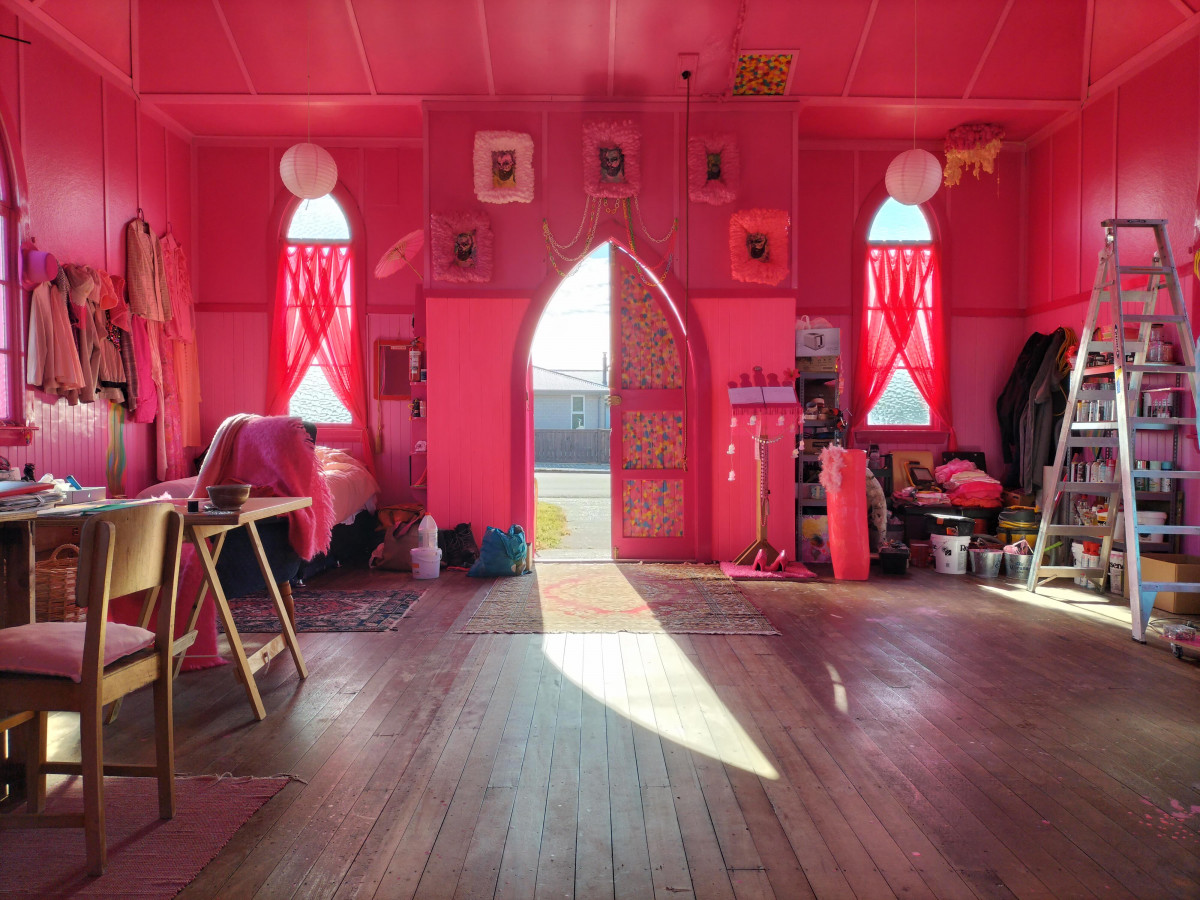 “She's such a loud presence in this quiet little corner of the world.” Photo: Sam Duckor-Jones.

Re: News Editor Mandy Te outlines our coverage and shares what belief means for some people.