Ema Tavola first learnt about BMI when she was at school. “We went around the class. Everyone got weighed, and then we looked at everyone on the scale. And I think at about 13 or 14, I fell into morbidly obese.”

She was a fit teenager, with the build of her Fijian family. “My ancestors were big people. And I felt straight away the harm of BMI measurements, of categorizing people on this spectrum of healthy, normal, obese, morbidly obese.” 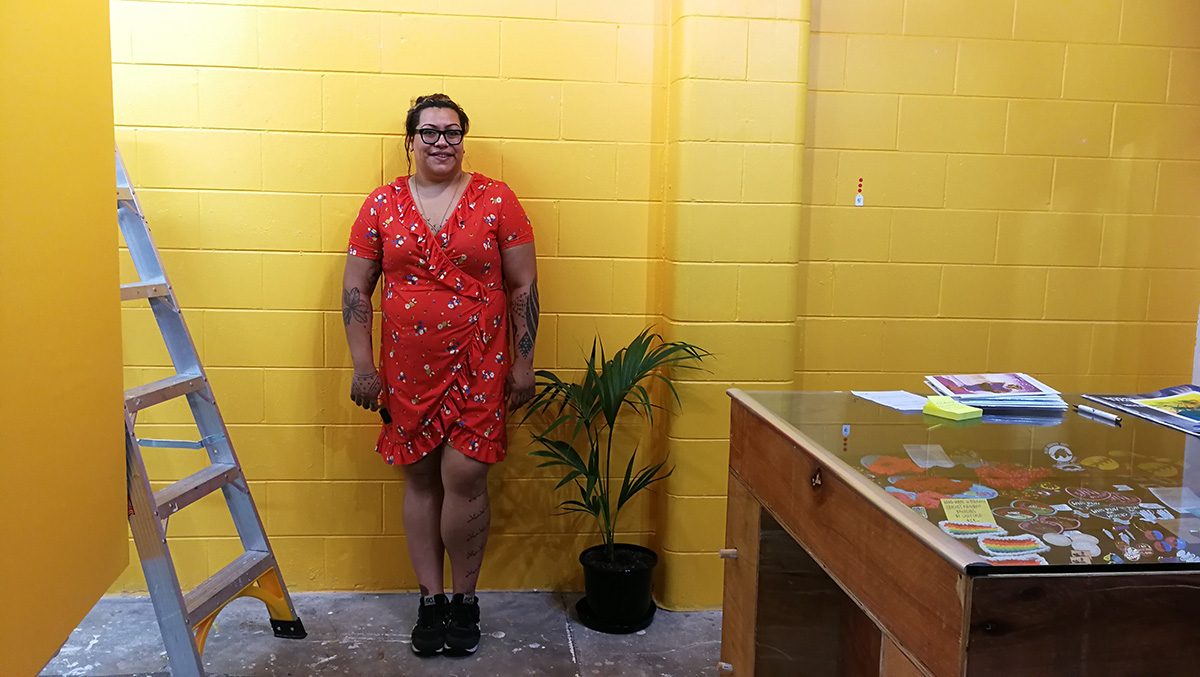 Ema and I kōrero over coffee at Vunilagi Vou, her bright yellow art gallery in Ōtāhuhu, Auckland. The walls are empty in preparation for the next exhibition. Ema, along with a group of creatives are preparing for FATFEB, a program celebrating fat bodies.

“I really wanted to create an opportunity for us to see what fat positivity looks like, what a world looks like when you are liberated from fatphobia,” she says. Fatphobia and obesity are structural issues that frame and shape our lives, Ema says, but we need to choose to not view ourselves through that lens. “It's not really a high-level curatorial concept. It's really personal.”

Ema sees obesity as a structural issue, much like racism, attached to socioeconomics, deprivation, and poverty. And she says environments like South Auckland create conditions for people to become obese. “You don't get a takeaway on every corner, a liquor store on every corner and a headstone shop in every block in affluent suburbs. This is a poverty indicator.” 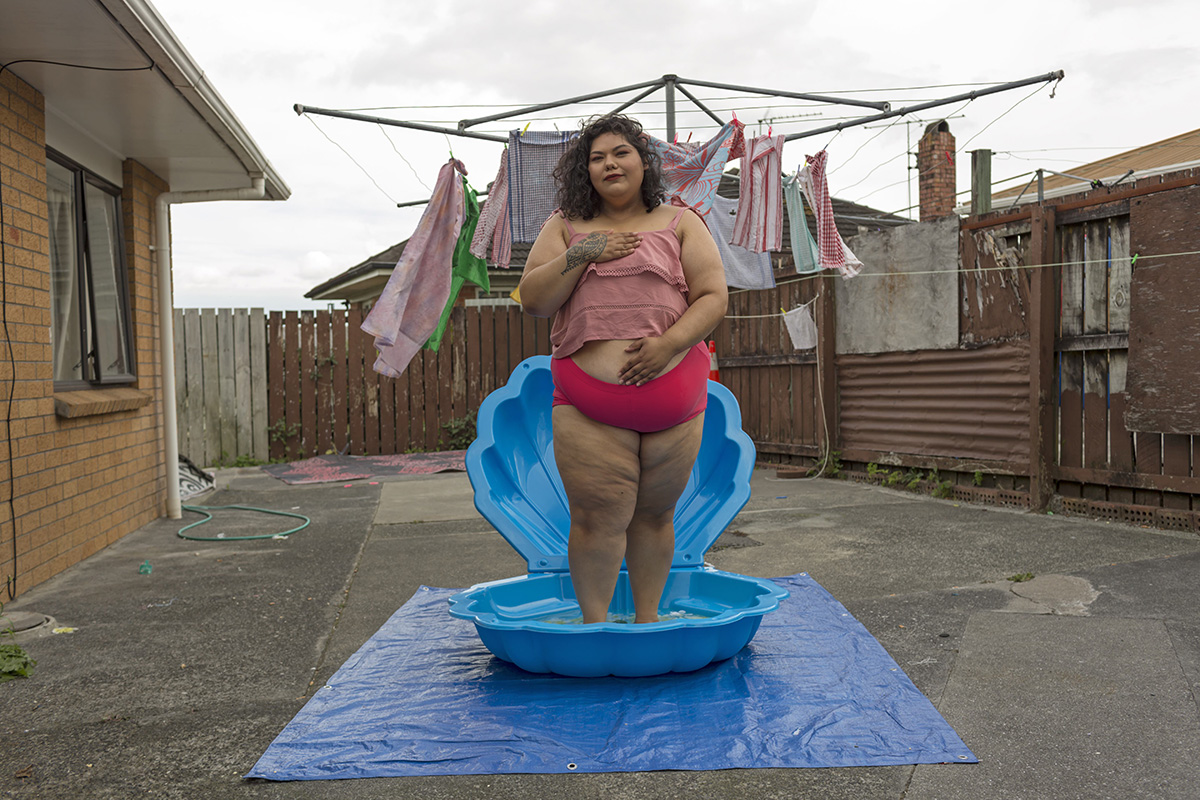 One of the works appearing in the exhibition, by Louisa Afoa

Fat is a word most people trip over themselves to avoid saying. But that’s what Ema prefers to call herself. “I think fat is a word that doesn't have a moral value. It is not positive or negative. It's a descriptor, and it's a descriptor that we're using really powerfully in the show.”

Research backs up Ema’s rejection of the BMI (Body Mass Index). A report published last year in the New Zealand Medical Journal found the BMI is flawed and can be highly inaccurate, especially for Māori, Pacifica and Asian children.

For Ema, liberating ourselves from mainstream conditioning around fat is part of a decolonisation agenda. “It's absolutely part of unpacking and rebuilding our body politics as part of a necessary process of decolonisation.”

She says unpacking the concept of fat for people of colour adds a whole new layer of complexity. “Unpacking fat for women of colour in South Auckland is a whole other dynamic as well. Being that we are in what is termed an obesogenic environment.” 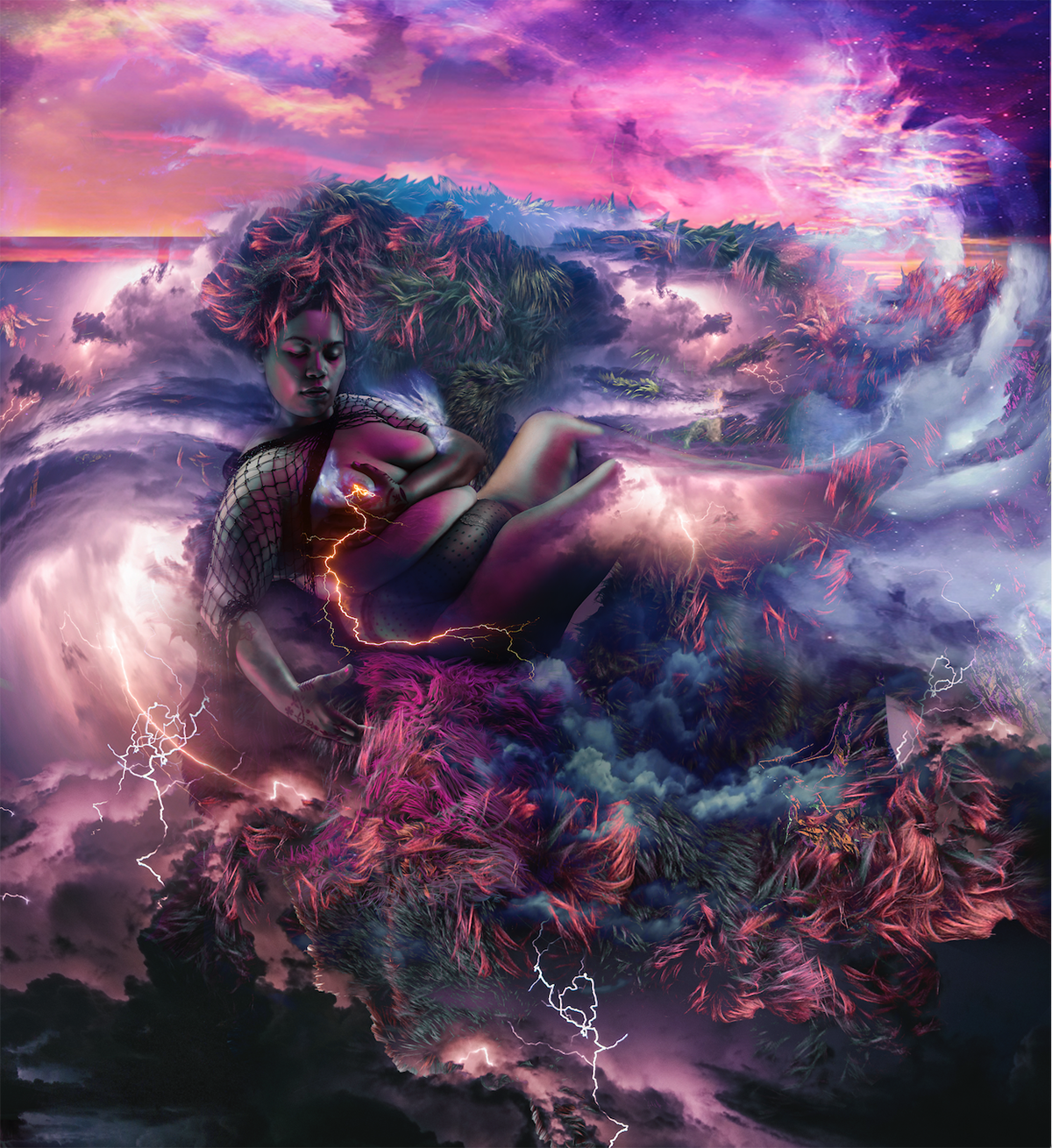 An artwork by Jermaine Dean and Elyssia Wilson Heti appearing as part of the exhibition.

Lissy Cole has been friends with Ema for 17 years and is working with her for FATFEB. She says they have both been on a journey of self-acceptance. “Being fat is not a death sentence and is not a sentence to live your life hiding away, it's just a fat body, that's all it is, and you can be fat and still do anything.”

Lissy has long been captivated by the idea that we can never actually see ourselves -  we only ever look out of our bodies, or in a mirror. Despite being known for her crochet art, for FATFEB she’s doing something much more conceptual, installing a full-length mirror in the gallery. She says the idea behind the mirror is to encourage people to really look at themselves and not see something wrong.

“Really that's what a mirror is used for, we look in a mirror to see what's wrong. Like, ‘Is my hair out of place, have I got little pimples, do I look fat?’ I'm interested for people to look at the mirror and absolutely not think of what's wrong but actually to look at all the things that are right with whoever’s staring back.”

Lissy has always been surprised by the number of women that refuse to look in mirrors, even when they’ve buying clothing off her. She says even glimpsing the sight of themselves in a shop window or a reflective surface can induce trauma in some people.

She hopes that people can come to FATFEB and be liberated from some fears or shame around being in a fat body.

“It is a pure and utter celebration of the fat experience. What I want is for other fat people to come along and go wow, okay, so I can actually celebrate my body, awesome. I can wear fucking togs and not feel judged but actually celebrated.” 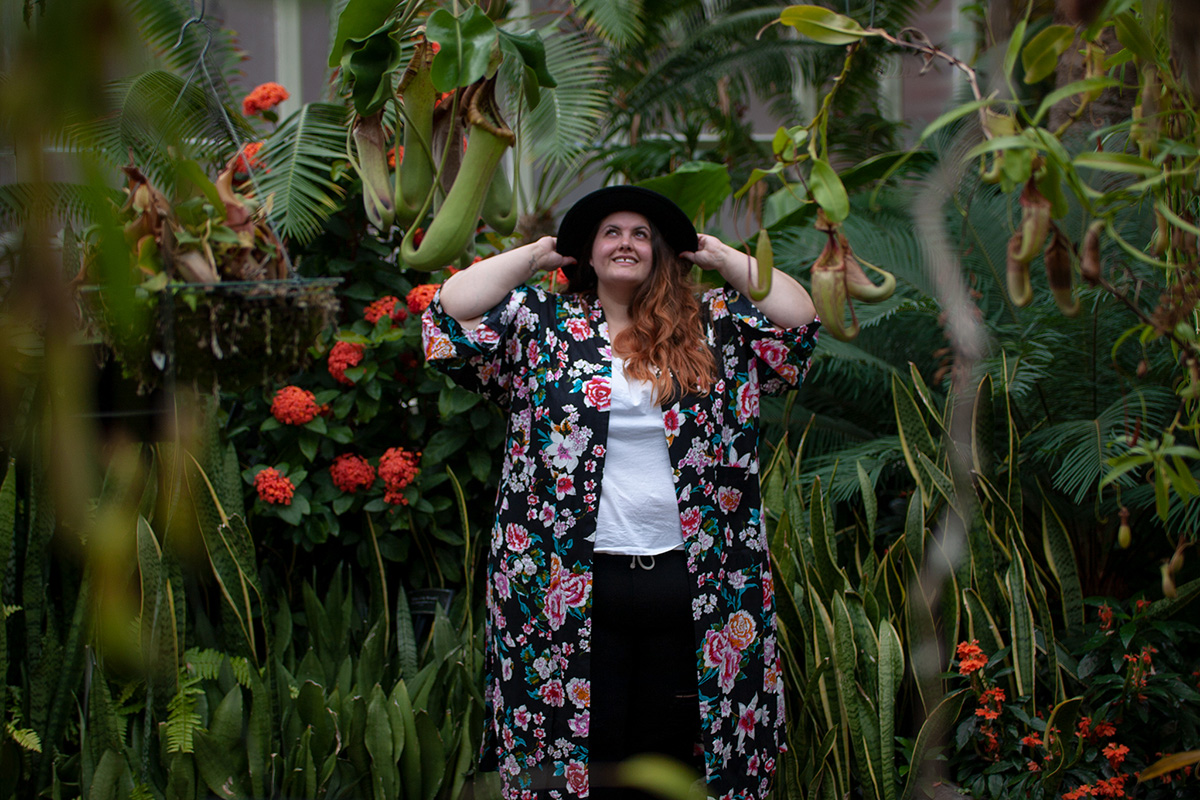 Meagan Kerr is a well-known New Zealand plus-size style blogger, whose photography is featured in the exhibition. She began blogging in 2012 when she couldn’t find any independent plus size fashion coverage in New Zealand. Her blog has now evolved from solely fashion to discuss all aspects of the fat experience, from things like getting a wax to flying.

Her earlier work in the fashion industry got her interested in adding a diverse voice to the mix and showing what clothes actually looked like on a non-model body. “In plus-size fashion things are usually shown on the smaller end of their size range. So, if they start at size 12 or 14 then you're going to be seeing those clothes on a 12 or 14, you're not going to be seeing them on the 24-26 that they go on to.”

For only three letters, ‘fat’ is a complicated word, says Meagan. “Lots of people have a really complicated history with it because, in the past, it's been used in a very negative way towards them and about them”.

But like Ema and Lissy, she simply sees it as a descriptor. Describing herself as fat is “no different from the fact that I'm Māori or I have tan skin, brown hair. It's just a word that describes me. But like any word, it depends on how it's used. So it obviously depends on context.

The word obesity is a word that’s not being used in the exhibition. One of the things Ema has learnt in creating FATFEB is the importance of the language around fat. She feels very strongly that ‘obesity’ and ‘obese’ are words attached to death, and to the stigma around fat experience. 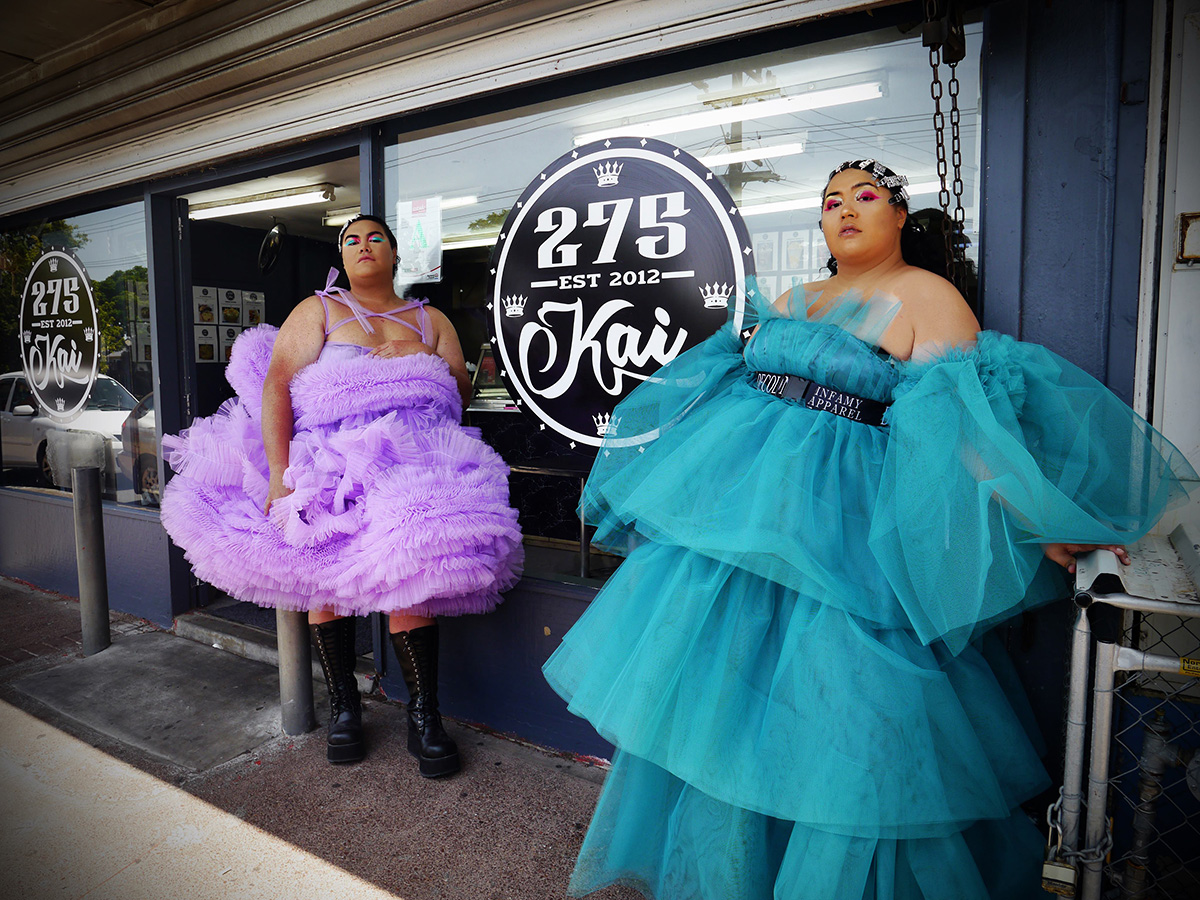 Dr. Cat Pausé is a fat studies scholar at Massey University, looking at the impact of fat stigma on the health and well-being of fat people. She is also a fat activist, working to get fat people the same rights and dignity as non-fat people.

Cat says a lot of people have never really thought about the impact that fat-shaming and stigma have on the health and well-being of fat people. It can even affect people who aren’t fat. “It's the three-year-old who doesn't want to be friends with the fat kid, a teenager who develops an eating disorder because they're so afraid.”

Ema hopes FATFEB will be a space for people to “open up our thinking around how we see ourselves and how we walk in the world”.

“FAT is deeply personal,” she says. “It’s creating a safe space for artists, who are sharing not brave but courageous insights into the world, to be able to come in here and have these moments of confrontation with ourselves.” 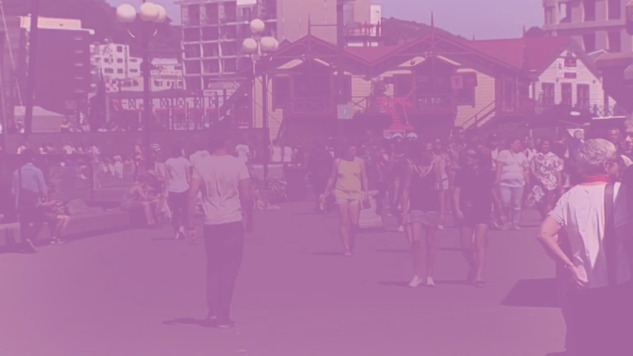