The world is in a fight to limit global warming to below a 1.5 degrees Celsius rise by 2030.

We are already at 1.1C. The latest international climate report shows we can win, but we are choosing not to.

It looked at more than 18,000 pieces of evidence. This evidence was reviewed by the authors of the report - 278 climate scientists from around the world.

Here’s what the IPCC found:

Current attempts to limit emissions are not enough

Under our current approach, warming will continue throughout this century, surpassing a 1.5C rise and well beyond.

Current projections show global emissions will grow to over 60 gigatonnes of CO2 a year by 2050 - that is 60 billion tonnes, the same weight as more than 10,000 fully loaded aircraft carriers.

To limit a 2C rise, our emissions would need to be closer to 20 gigatonnes by that point.

Without further action, the world is currently projected to hit a 3.2C rise by 2100. 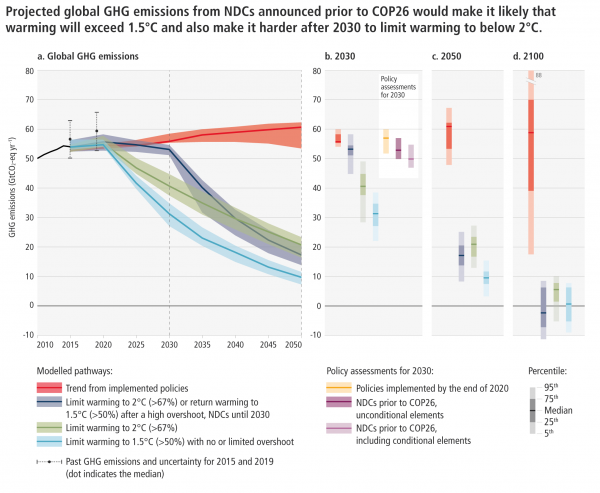 The red line in this table shows the projected emissions based on current actions and commitments. The blue line shows how our emissions would need to change to limit warming to a 1.5C rise. NDC’s refer to commitments governments have made to combating climate change. Source: IPCC Summary for Policy Makers.

The world after a 3.2C rise

A 1.5C rise will already be incredibly disruptive for the planet - a 2C and 3C will exponentially intensify that.

At a 1.5C rise, the world will have more than double the number of heatwaves and at 2C, that will rise to more than three times.

The average length of droughts will become two months at 1.5C, four months at 2C, and 10 months at 3C.

That same exponential rise will apply to a huge range of weather and environmental phenomena - from sea level rise and ice melting, to storms and floods.

The ripple effect of these disruptions will change life as we know it for the worse.

There will be less food, economies will falter and disease will rise.

Entire ecosystems will shrink and die, leading to further disruptions to our environment and ultimately our livelihoods.

While previous IPCC reports have focussed on limiting the world to 1.5C rise, this latest report discusses how we could get back to 1.5C after we overshoot it.

In order to limit global warming to below 1.5C, emissions would need to peak by 2025 and then decline annually and nearly halve by 2030.

We are not on track to achieve this, the IPCC report said.

This is still technically possible, the report found, but would require immediate and robust actions. 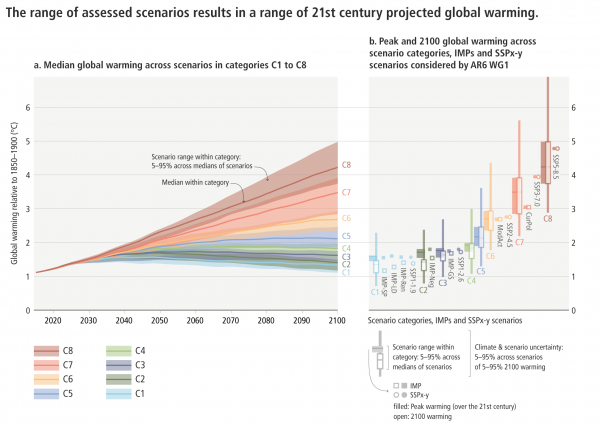 The IPCC has created 8 different scenarios for how we can respond to the climate crisis and its impact of warming. Scenario C1 would see temperatures return to near current levels by 2100, Scenario C8 would see a rise by as much as 5C. Source: IPCC Summary for Policy Makers.

Modelling based on every country meeting its current commitments shows that we will likely exceed 1.5C during the 21st century.

However, the IPCC found that countries were not even on track to meet those commitments.

Some countries are doing better than others

At least 18 countries have sustained emission reductions for the past ten years.

But New Zealand is not one of those countries.

Compared with other countries, NZ has the 6th highest emissions per capita - it’s less than North America and Australia, but similar to Japan. 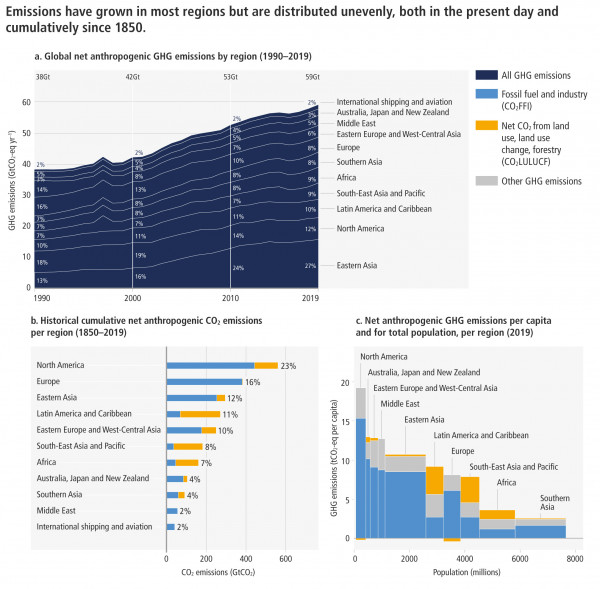 Emissions have grown in most regions but are distributed unevenly as seen in this graph. Source: IPCC Summary for Policy Makers.

The report found countries’ emissions reductions were likely caused by policy changes reducing how much energy these countries needed and how polluting it was to produce energy from fossil fuel sources.

Most emissions are created burning fossil fuels for energy, like petrol to drive cars, coal to power factories and gas to power electricity generating plants.

However, these reductions are being counterbalanced by the highest per capita countries contributing a disproportionately large share of global household emissions.

Emissions have increased across all sectors, from agriculture, to transport and industry, and across all greenhouse gases, including CO2, nitrous oxide and methane.

But the IPCC report said technologies and approaches that would allow these sectors to limit global warming are available.

They are also becoming cheaper.

The cost of low-emission energy technologies such as solar, wind and batteries have decreased by up to 85 percent over the past 12 years.

While there has been uptake on emission-cutting policies and technologies, the world now needs to scale up and adopt these and other renewable energy systems as widely and equitably as possible, the report found.

In the IPCC’s press release, co-chair of the author team, Jim Skea, said now is the time for action.

“Without immediate and deep emissions reductions across all sectors, it will be impossible. ”

The country will remain at its current traffic light setting for at least another week and a half.

What to do at a pōwhiri: tikanga explained

Our Tikanga 101 explainer helps you navigate the dos and don’ts when taking part in a pōwhiri.