Covid-19 Response Minister Chris Hipkins said the Government is looking at starting to vaccinate those under 12 at the end of January. There are also 146 new cases today.

Currently, the Pfizer vaccine is only approved for people over 12. Medsafe, the Government’s drug buying agency, is looking at the “paediatric version” of it for 5 to 11 year olds. It is about a third of the dose of the adult vaccine.

Hipkins said timing of the rollout for 5 to 11 year olds depends on Medsafe’s approval of it. The agency has an expert advisory committee looking at the vaccine, and it is expected to receive specific advice for it by mid-December.

Once Medsafe makes its decision, the Health Ministry will make recommendations around the use and rollout of the vaccine for under 12s, Hipkins said.

In the meantime, the Government is anticipating it will begin vaccinating the younger age group at the end of January.

“We’re now well advanced in our planning for the rollout to 5 to 11 year olds,” Hipkins said.

He acknowledged the younger age group had a lower risk of direct impacts from Covid but said the virus could still have serious health consequences for them, particularly for children who are immunocompromised or have significant respiratory conditions.

Nationally, 86 percent of those currently eligible for the Covid vaccine (over 12) have had both doses. 93 percent of eligible people have had one dose.

There are also 83 people in hospital, of which 9 are in ICU or in the high dependency unit.

Director General of Health Dr Ashley Bloomfield also talked about the trend in hospitalisations during the Delta outbreak.

So far, hospitalisation rates appear to have levelled off, while the proportion of people requiring serious ICU-level treatment has dropped. Bloomfield attributed this to high vaccination rates, and a high quality of care from clinicians.

“Our hospitalisations have very much levelled off across Tāmaki Makaurau, as has ICU usage,” Bloomfield said.

“While our hospitalisation rate throughout the full outbreak has remained at between 11 and 12 percent, as it has been for the last 4 weeks, our proportion of people who are cases that require ICU care has dropped from 5.7 percent across the full period of the outbreak, down to 3 percent in the last month or so.

First, the impact of vaccinations, which prevented people from both being hospitalised and being severely unwell. Second, the work of clinicians in Auckland who are using the latest treatment protocols. This included early use of oxygen, use of the corticosteroid dexamethasone and antivirals, he said.

Bloomfield also touched on the importance of continuing to use the Covid tracer app in the traffic light system, which begins midnight tomorrow.

‘I felt pressured to go to uni’: Better career advice for teenagers could prevent dropouts 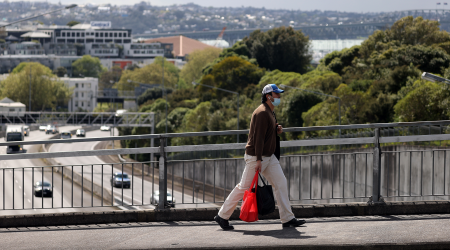