More than 1000 people protested outside a speaking event hosted by the controversial organisation Speak Up For Women in Wellington last night.

Speak Up For Women is an organisation campaigning against proposed law changes that would make it easier for trans people to change the gender on their birth certificate. Over 1000 pro-trans rights protesters turned up en masse to protest an event the group had at the  Michael Fowler Centre last night. 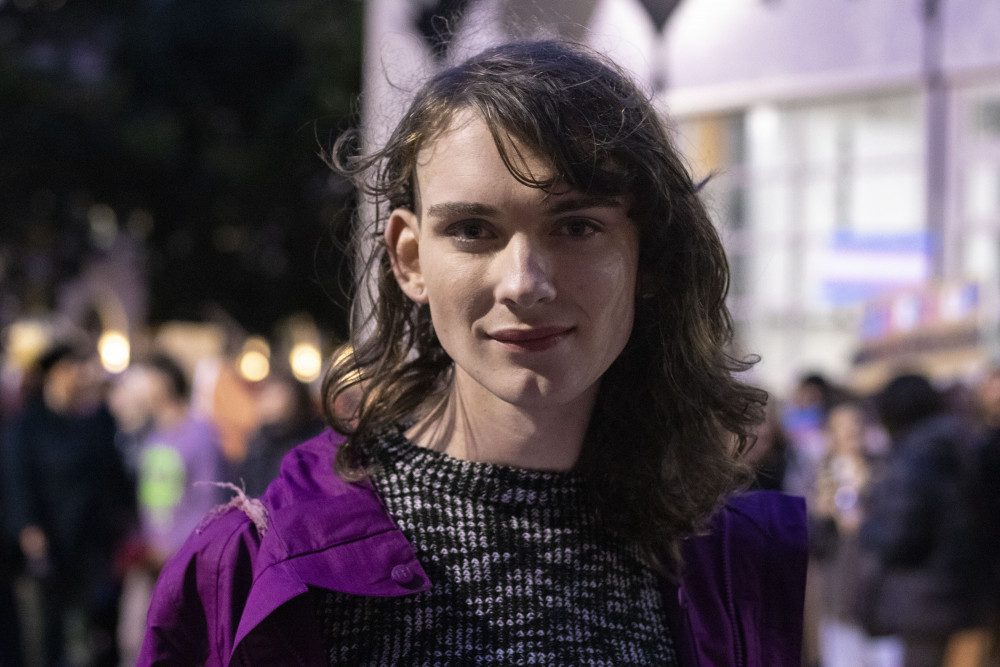 Protest organiser Elle Kingsbury, a member of Wellington activist group Queer Endurance/Defiance, said they had organised the protest as a “public, peaceful, positive show of solidarity with trans people”. The law changes being proposed would amend the Births, Deaths, Marriages and Relationships Act (BDMR).

“I hope this protest will show that Wellington stands with trans people and for trans rights. There are far more people out here than are at the meeting inside. I think that shows quite strongly that anti-trans beliefs are a small minority in Wellington, and in New Zealand in general.” 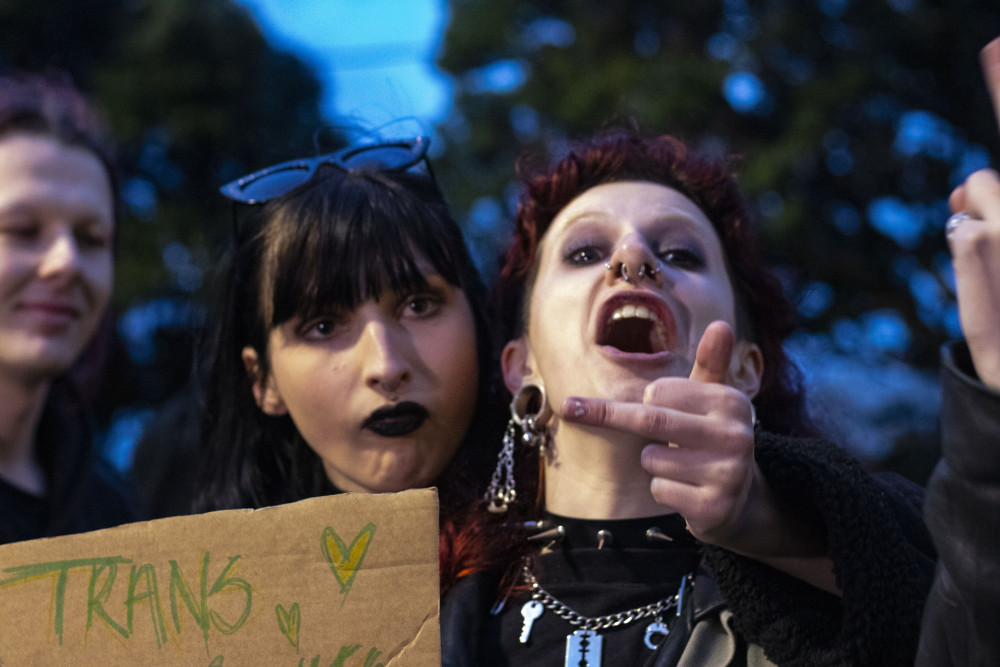 Arlie and Rachel jeering the two men harassing the crowd

As the protestors gathered, two men with open beer cans shouted at the group. They were quickly drowned out by a chorus of “Trans rights are human rights” from the crowd.

Arlie and Rachel jeered the men as they walked away, shouting “I wore my steel cap boots tonight for a reason”.

Rachel said she came out to support her trans brothers and sisters, adding “I used to be TERF, for fuck sake”.

TERF stands for trans-exclusionary radical feminist, and is a derogratory term often used by trans supporters to describe Speak Up For Women. The organisation has said the term is offensive and they don’t believe it applies to them.

Rachel said that her turning point away from TERF ideology was when a number of her friends came out as trans.

“It would be hideous for me to not accept them for who they are,” Rachel said. 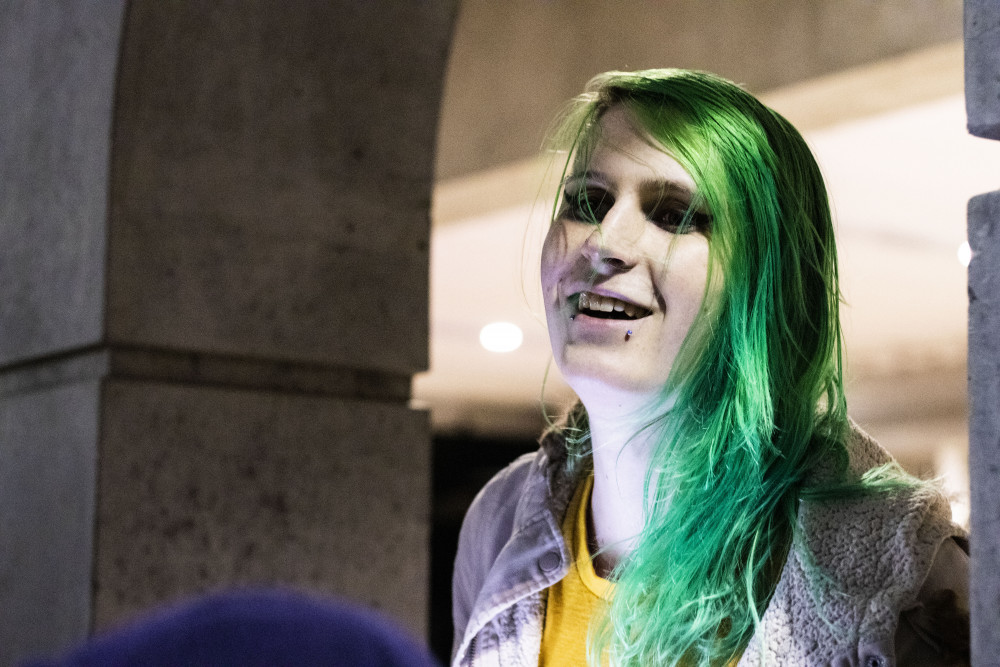 As the crowd gathered, organiser Kate Power spoke about her perspective on the TERF ideology.

“They say they are the feminists, the ones defending women’s rights.

“They say they are the feminists while reducing women to a collection of body parts.

“While they reduce womanhood to the ability to carry children.

“While they apply more meta-hypsical significance to the penis, a tube of flesh and blood, than the patriarchy ever could.

“While they mock trans women for their height, broad shouldered, or facial hair, as if cis-woman with similar features aren’t lisenting.

“While they tell lesbians they are not lesbians for loving trans women.

“They say they are the feminists while they dedicate every ounce of their political energy to misunderstanding, misrepresenting, and antagonising trans people.” 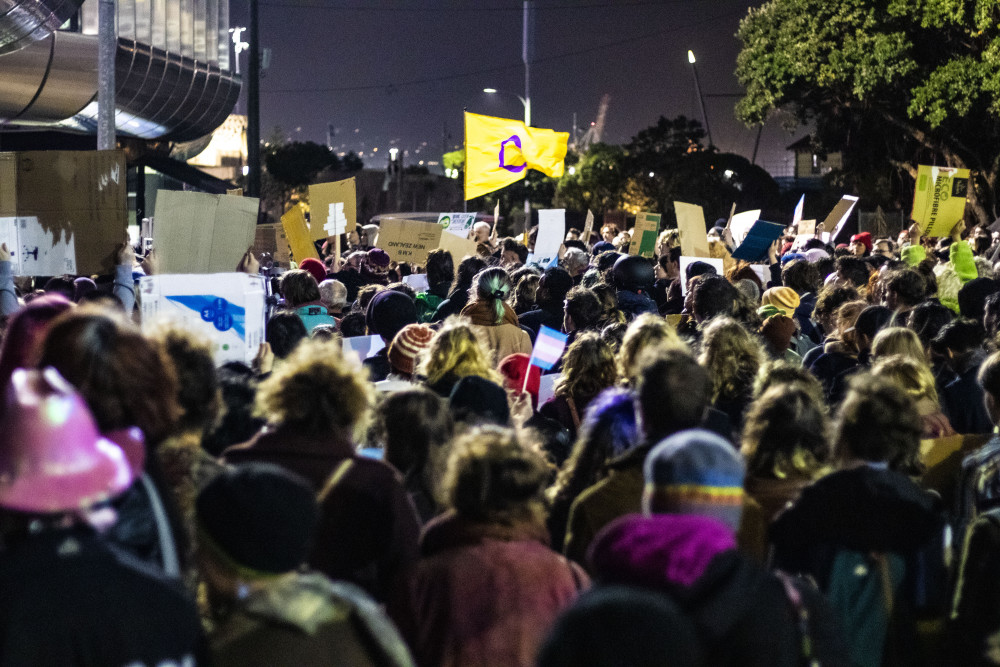 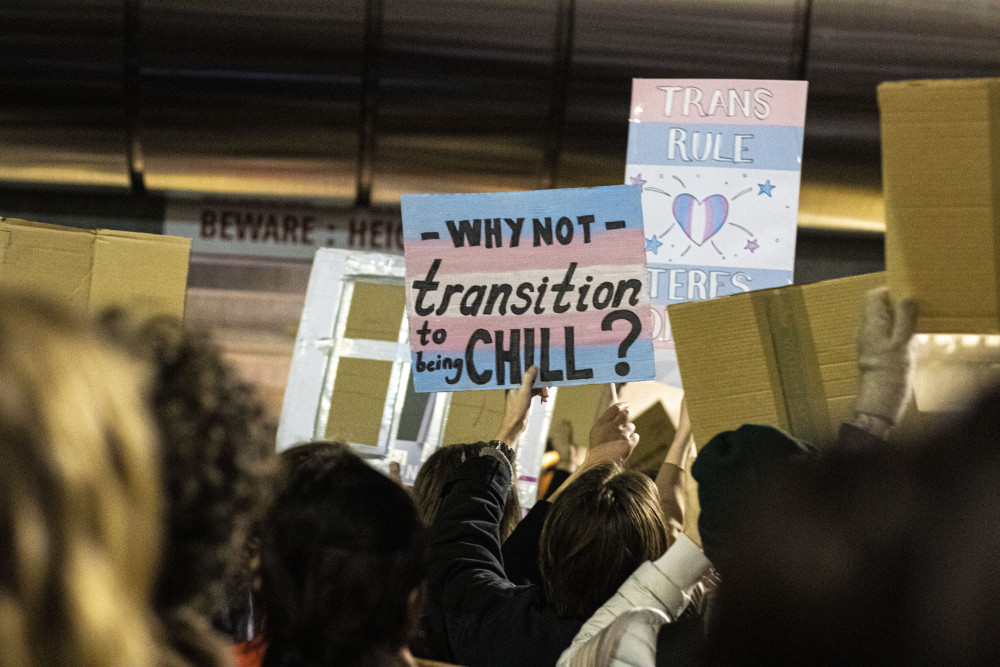 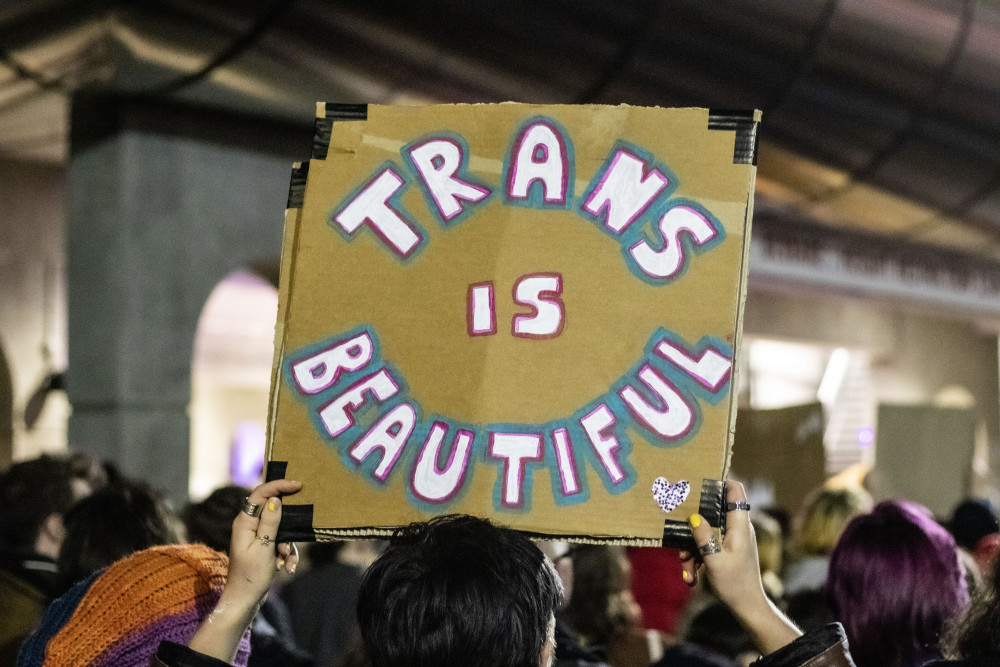 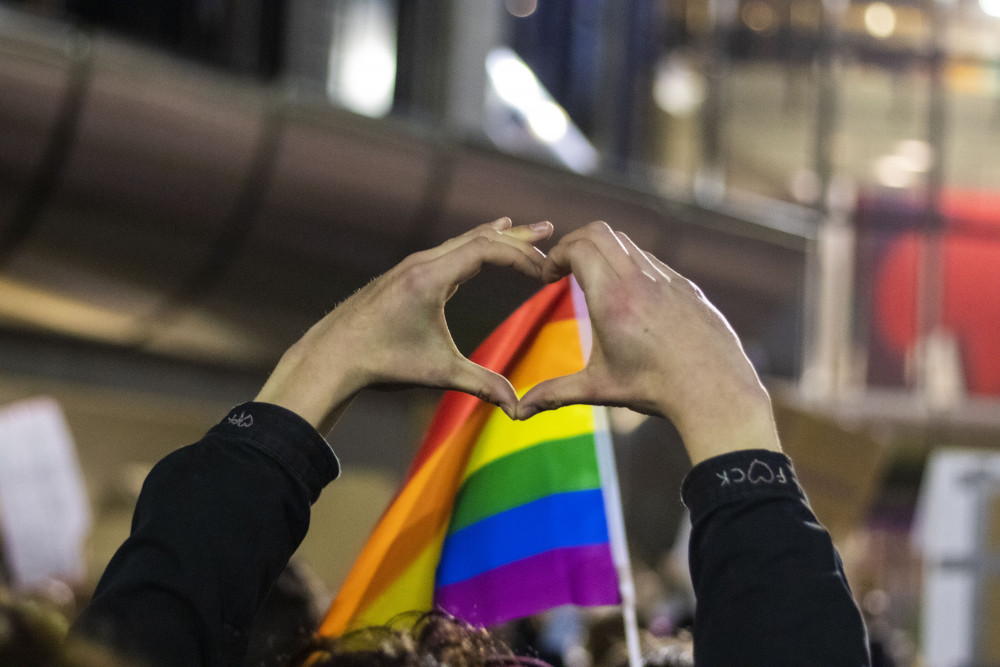 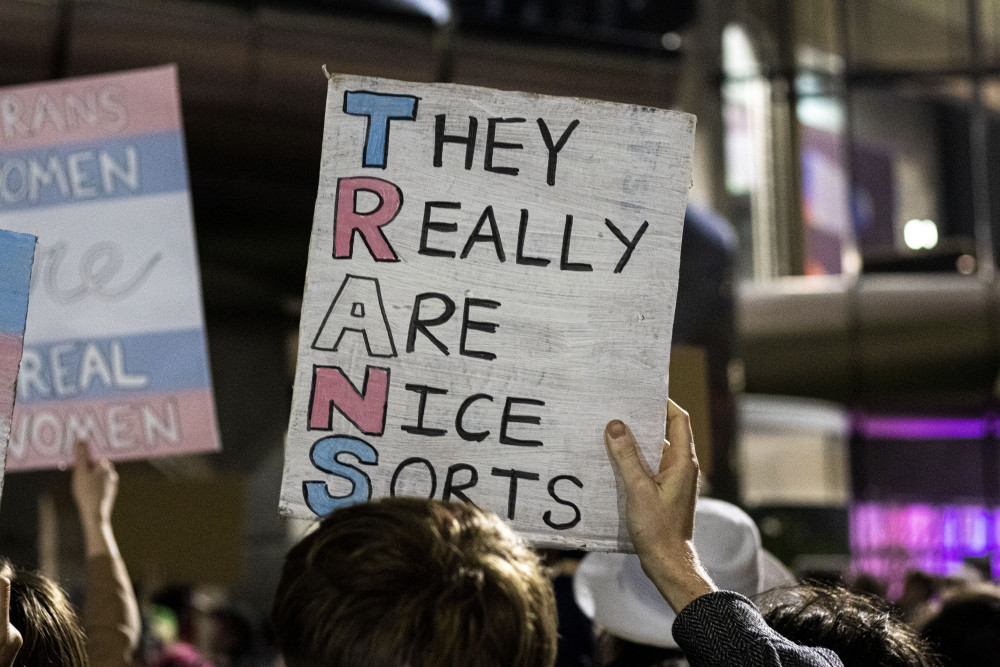 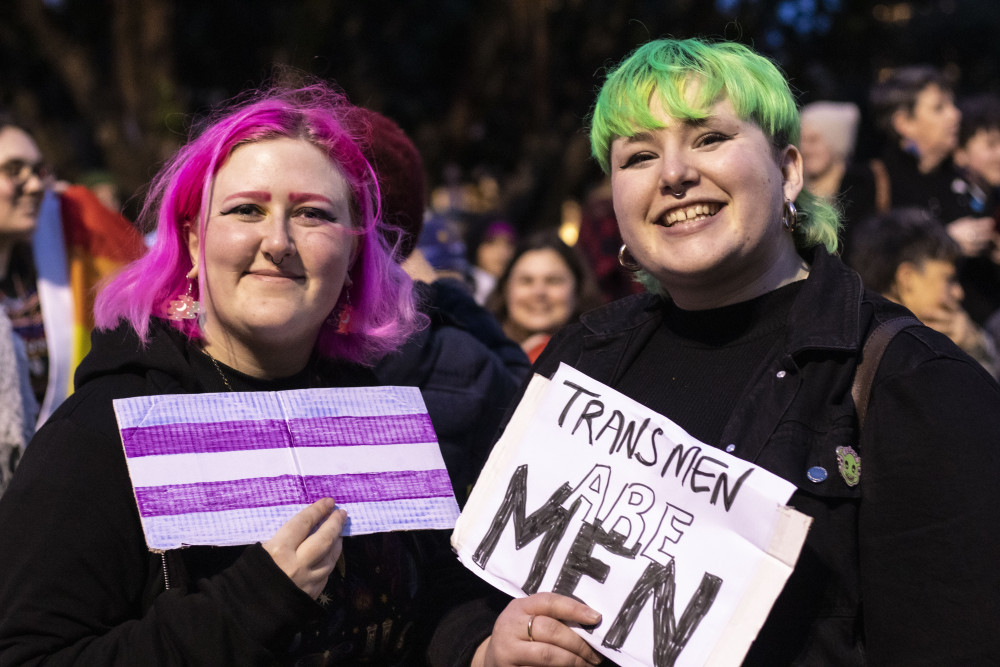 Of course many trans people were also there.

Jewelia attended with her friend Fey, and said that as a trans/gender fluid person they don’t really like people who don’t want them to exist.

“I wanted to rally up with other trans people to be seen and heard. It is about presence. Some people want to minimise our voices, and so having a bunch of people here saying ‘trans people are great and we love them’ is a great way to promote trans rights.” 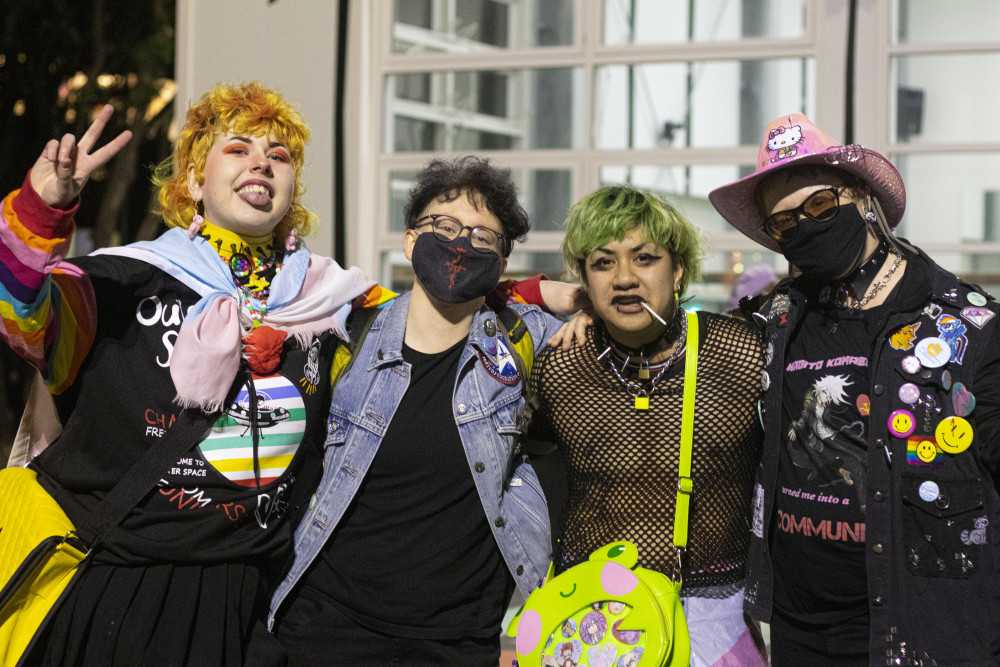 A lot of friends came to support each other, like Moishe, Roy, Noiz, and Frey.

Moishe said that more than anything he wanted to be there to love and support other trans people - especially the organisers and speakers who had put themselves out there.

“There is a whole fucking movement of hate going towards people that speak out against transphobia, and I wanted to let them know that we stand with them.”

“I want to yell nice things at those people standing up there. Because it takes a lot of bravery to do that.” 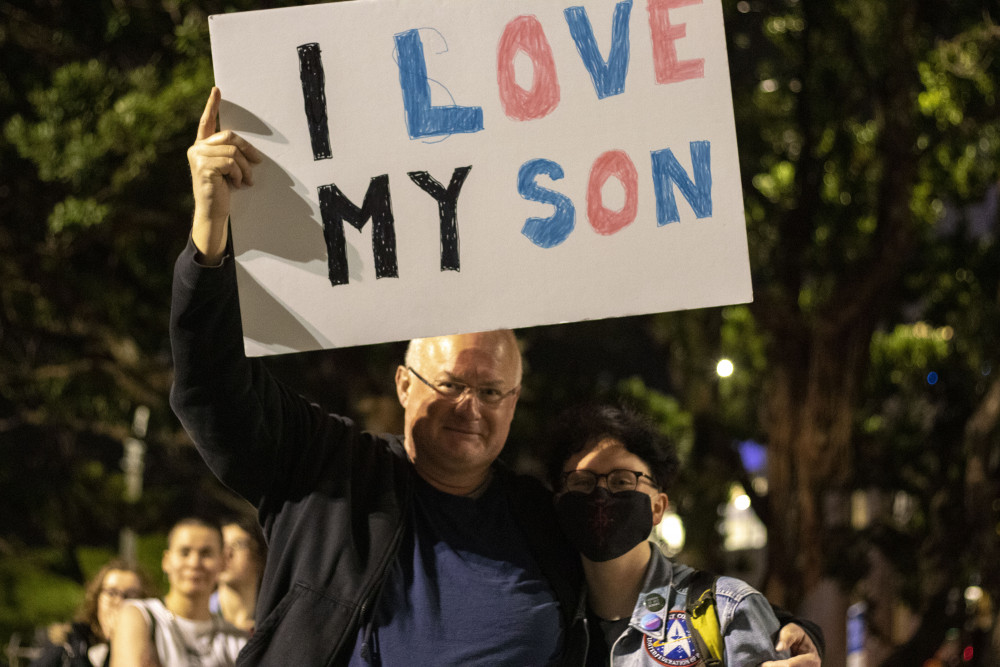 Roy and his dad Matthew

As well as his friends, Roy’s dad Matthew was also there.

“I’m here to stand up for trans rights, and because my son is trans,” Matthew said.

“I want to show that love wins.”

Roy said it was really nice and cute that his dad was there supporting him.

“I knew he would be here, but the sign is a nice surprise.” 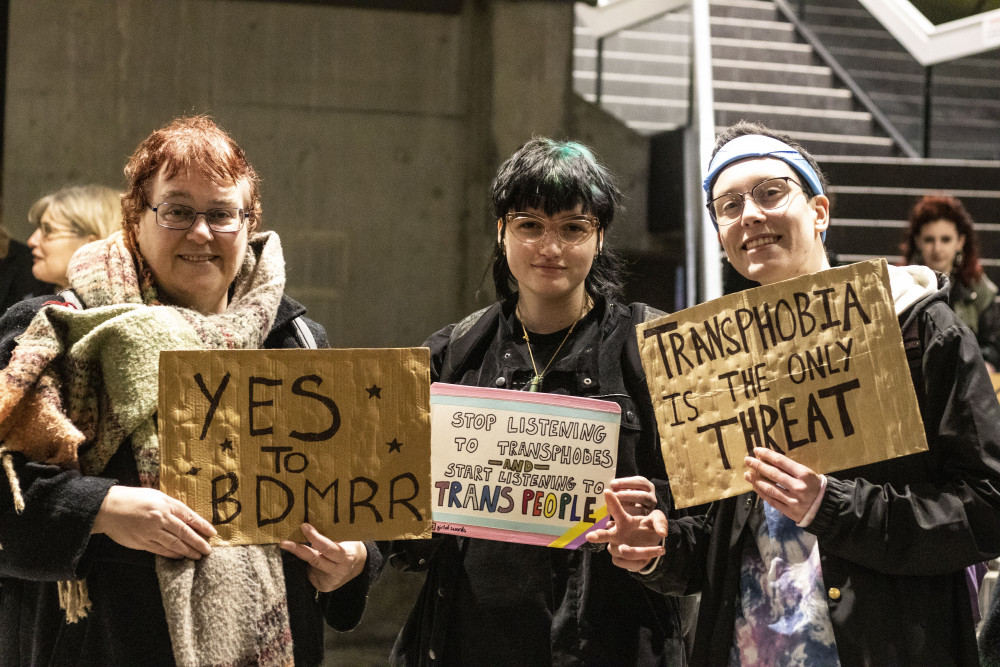 Dylan had also come with his mum Cushla and friend Erin.

Dylan said he was drawn to the protest by the love and support shown for trans people by not only Wellingtonians, but his mum as well.

“I want to support my transgender son,” Cushla said. “I want people to live their best, most authentic lives - whatever is right for them.”

“Life is too short for transphobia. We don’t need it.” 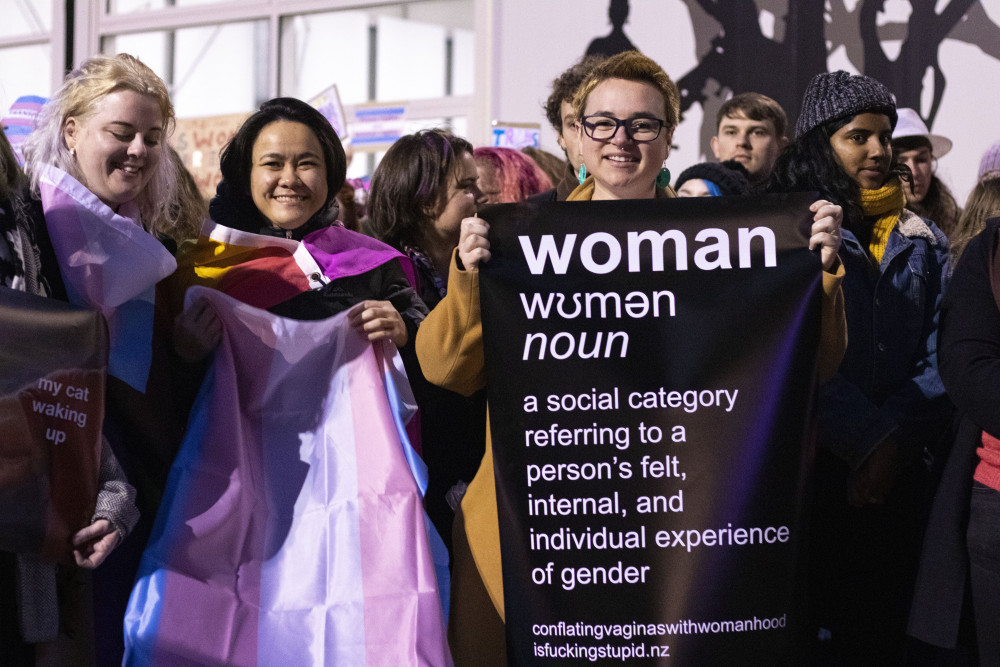 Speak Up For Women made headlines earlier this week with a billboard in central Wellington that featured the Oxford English Dictionary definition of woman as “Adult human female”. Victoria had come with a freshly printed sign in the same style, but with a tweaked message.

“It is a mockery of the TERF billboard that Stand Up For Women put up. Their essentialist understanding of gender is really harmful. So, I’m here with the social constructionist view that is much more accurate,” Victoria said.

“I’m not sure we can change the mind of anyone coming to this conference, but we can show the trans community that they are valued and loved.” 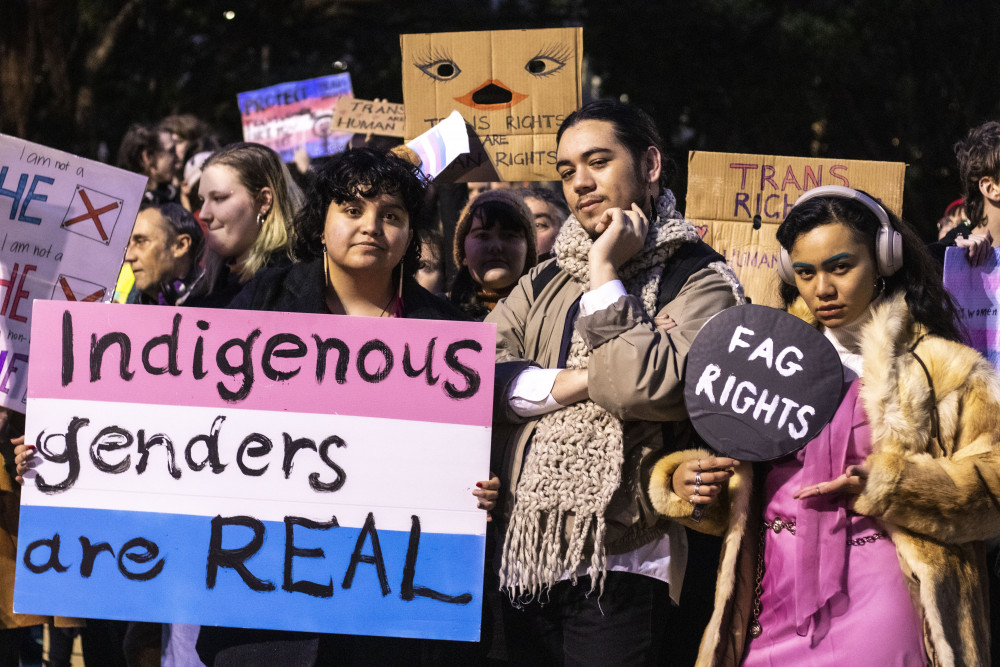 There was also strong support of the protest from Māori activists. Justice advocate Awatea Mita said that there are clear links between TERF ideology and colonisation.

“In Aotearoa there were indigenous trans rights that were taken away by colonisation. I’m showing up to support trans rights because diverse indigenous genders are real and we want to reclaim our indigenous identities.” 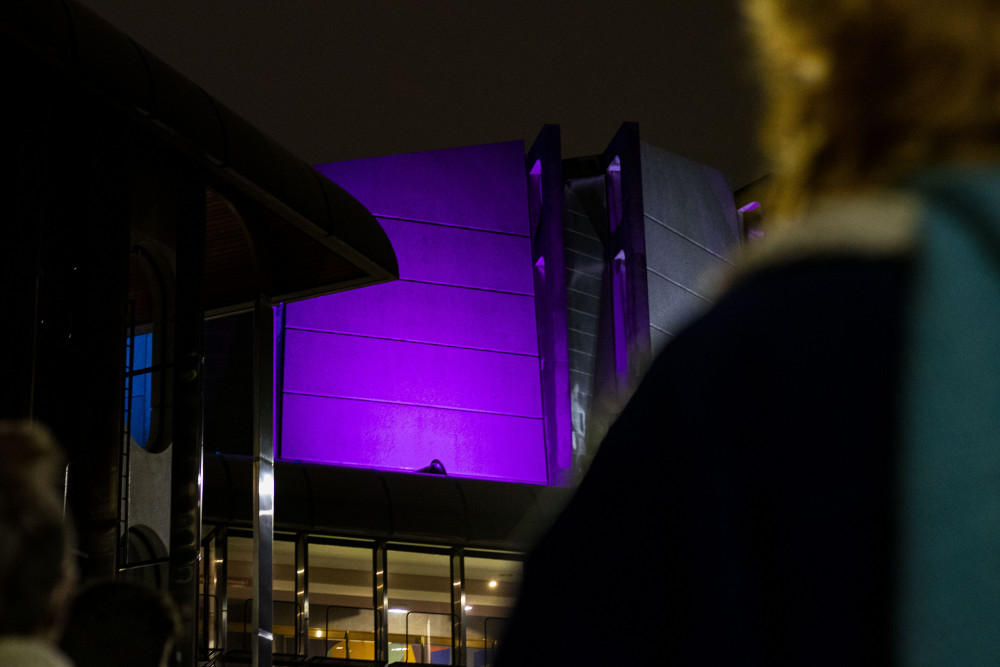 The Wellington City Council had the Micheal Fowler Centre lit up in the transgender flag colours at the same time as the Speak Up For Women event was being held inside.

As the speeches ended and it began to rain, the protestors moved into the car port of the Michael Fowler Centre and a vogue and poi circle quickly broke out. 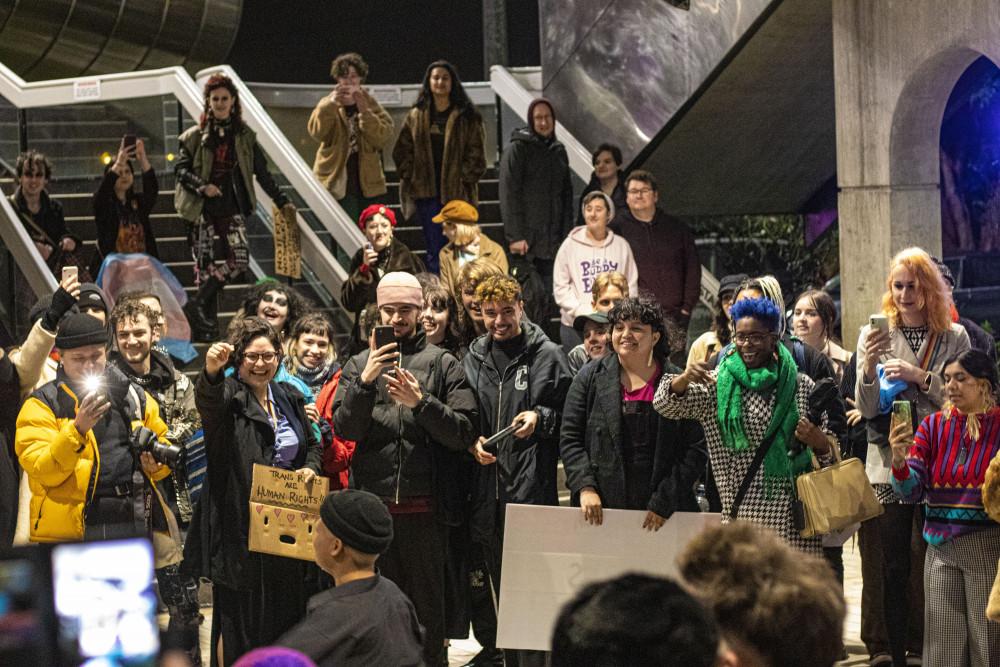 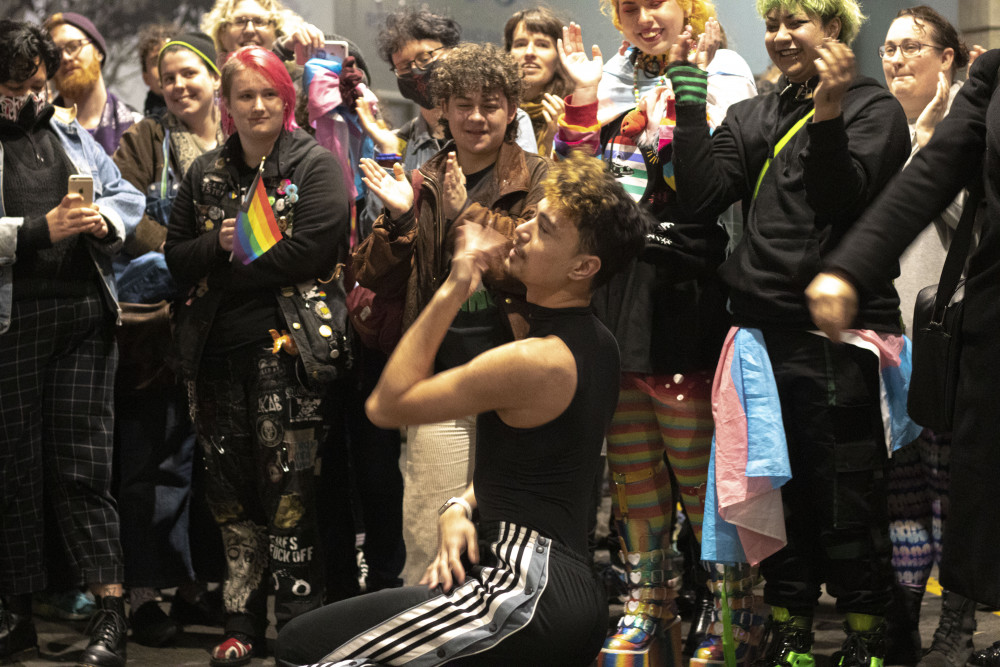 In an interview with 1 News, Speak Up For Women spokesperson Beth Johnson said that the group is “absolutely not” anti-trans.

“I strongly object to that, it actually really upsets me,” she said

“Speaking about women’s rights, and talking about how we can advance transgender rights without impacting the existing rights of women and girls, those two things should be able to happen together.”

Beth said the organisation’s campaign is focused on the proposed amendment to the BDMR Act. It believes the proposed change will negatively impact cis-women.

“That will have impacts to the eligibility and access to single-sex spaces and services.” 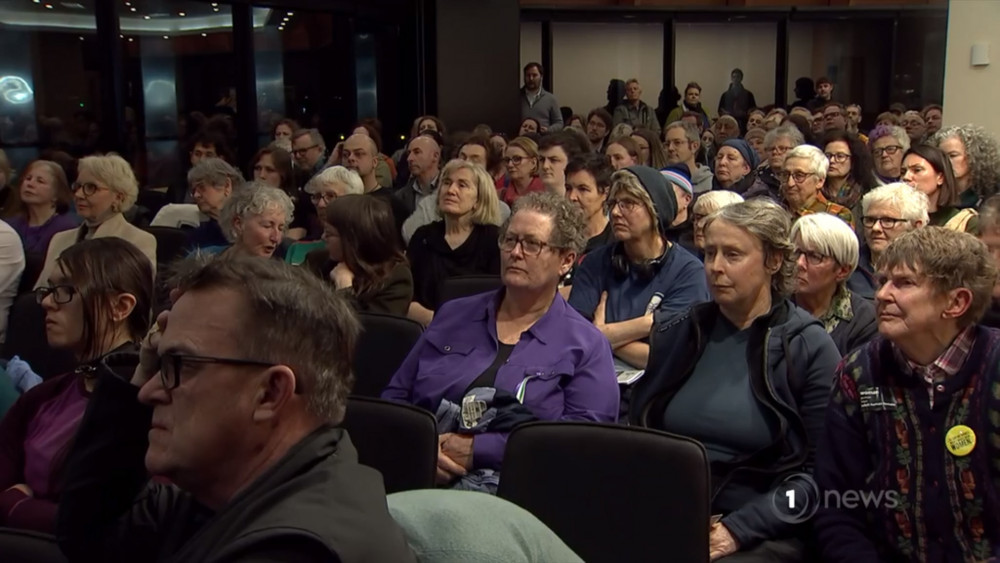