By Janhavi Gosavi and Salient Magazine

During the summer of 2016, Callum worked for Project Bloom.

He was stationed at shopping centres, asking passers by, particularly the families of young girls, if they wanted to enter a giveaway to win a free photo shoot.

At the end of every day, Callum would ring up every single entry to inform them they had won.

“It wasn’t a giveaway, it was a way of collecting leads” which is “super shady”, he said.

Callum, who asked for his last name not to be included due to privacy reasons, never worked there again - sceptical of any business model which he believed preyed on young girls to fork out large amounts of money.

Growing up, my Facebook feed was flooded with images of Project Bloom models.

They flexed their photoshoots as status symbols that declared “I’m young, I’m beautiful, I’m sure of myself”.

These were done at Project Bloom. A photography studio based on Wellington’s Cuba St that was popular—and is now infamous—for its edgy photoshoots marketed at young girls.

Between 2014 to 2017, every teenager in Wellington knew someone who had done a photoshoot with Project Bloom.

Yet now, the girls I went to school with cringe at the thought of their images resurfacing - Project Bloom feels like a fever dream.

It was only after I met folks from all around the country at university that I realised this nostalgic fever dream was exclusive to Wellington.

Project Bloom’s most popular photoshoot was the ‘Urban Fashion Photoshoot’, orchestrated on the streets of Wellington Central.

Models would lean on graffitied walls, push through metal fences, and strut in moody alleyways.

Models were shot in soft focus with a vignette, and occasionally the photos had a sepia filter over them.

These aesthetic choices make us gag now, but they were all the rage in the 2010s. 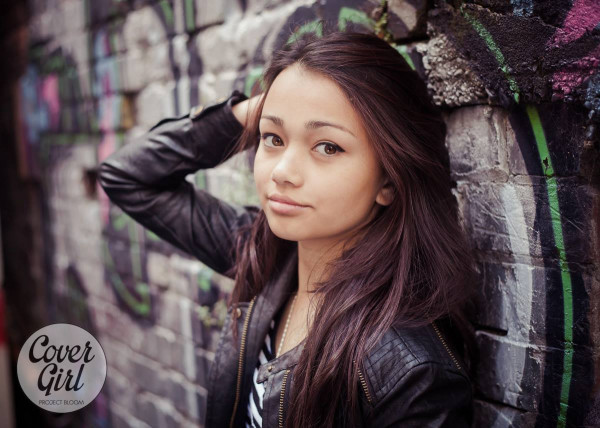 “My skin is definitely smoothed and my freckles were removed, no wonder why teenage girls loved their pictures,” Ashlee Metcalfe says. Photo: Supplied

Ashlee Metcalfe, who attended Wainuiomata High School at the time, said many of the “popular girls” at her school did it.

She hopped on the bandwagon because she won a free photoshoot.

Ashlee’s photographer was lovely to her, helping her pose and feel comfortable in front of the camera.

The only gripe she had was that the studio would over-correct their photos.

“My skin is definitely smoothed and my freckles were removed, no wonder why teenage girls loved their pictures,” she said.

Koyal Singh, who was at Wellington Girls’ College when she did her shoot, had an identical experience.

“By then, half the people I knew still thought [Project Bloom] was cool, the other half found it cringey.”

Her photographer was also very comforting, and made her feel like no one was around, even though they were shooting in Wellington Central.

Neither of the girls bought any of their pictures because they were “incredibly expensive”, but they could keep one on the condition that it was posted on Project Bloom’s public Facebook page, as an entry into their Cover Girl Competition. 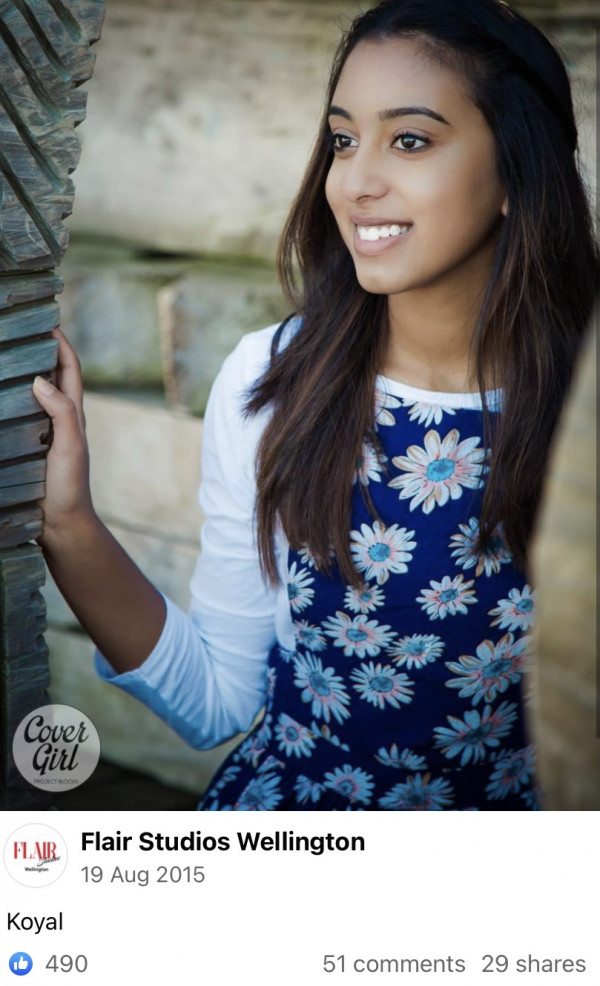 A screenshot of one of Koyal Singh's photos, shot by a Project Bloom photographer. Photo: Supplied

The Cover Girl Competition was held annually by Project Bloom. The grand prize was a day-long photoshoot experience valued at $3000, where the winning model and their friends were picked up in a limo, dolled up for a shoot, and then sent on a shopping spree courtesy of the competition’s sponsors.

The competition launched circa 2013, and it received more than 500 entries annually at the peak of its popularity.

The demographic of clients was predominantly young girls and women between the ages of 13 and 25.

Project Bloom is now a subsidiary of Flair Studios, which is directed by a photographer named Peter Wiezoreck.

He said 5 to 10 percent of entries every year were from young boys and men, and that over the course of the competition they had crowned four Cover Boys.

In round one of the competition, every model that has done an ‘Urban Photoshoot’ in the past year has one photo of themselves posted on Project Bloom’s Facebook page.

The top 30 entries with the most likes are then progressed to round two, where a panel of Project Bloom’s sponsors hand pick the best six photos.

In round three, the top six models are invited to be interviewed, so that Project Bloom can gauge their personalities.

Round one was a rollercoaster.

Contestants did everything in their power to amass the most likes.

Koyal took it upon herself to personally message all of her friends, asking them to reshare her photo, and a bunch of them left her on ‘seen’.

“I begged my dad to share it, even my mum’s friends shared it, it was very embarrassing”, she laughed.

Ashlee said she “sold her soul for those 386 likes”.

She even recalls how a “really popular girl” from her high school didn’t get shortlisted for the top six, and her affluent mother “made a public fuss about it”.

Round four is where it gets wack. The winner is picked out of the top three, but they only find out they have won the day of the photoshoot experience.

Let me paint a picture: 15-year-old Ashlee is sitting in her living room with her friends, who are all getting ready to spend the day being photographed and doted on.

They all know she was cool enough to become a Cover Girl finalist.

But is she cool enough to score them all a ride in a limo?

The phone rings. It's Project Bloom.

After a short conversation, Ashlee hangs her head.

She hasn’t won, probably because she “tanked” her interview and told the judges if she could put anything into a time capsule, it would be her phone.

Embarrassed and disappointed, she sends her friends home empty-handed, an experience she describes now as “slightly traumatic lol”.

I asked Peter if he thought getting young girls to compete online for likes in order to win a photoshoot was ethical.

While he cannot be held responsible for starting this competition — as he only came on board around 2017— he said that this strategy was the only way they could think to get heaps of exposure.

At the time, Project Bloom was not aware of the psychological impacts involved in social media rat races.

But Peter was aware that the playing field wasn’t even for every contestant, saying, “some people might have felt left out for not getting enough likes and some were cheating because you could buy FB likes”.

The Cover Girl competition wasn’t the only bizarre thing about Project Bloom.

I found it really weird that the most common way people got a photoshoot wasn’t by paying for it, but rather winning it.

“Our clients have the opportunity to purchase further after they have received the free photoshoot plus one digital image, but there is no obligation to do so,” Peter said.

In my opinion, what makes Project Bloom’s practice questionable is that they specifically marketed themselves to young girls.

Advertising your services as free while burying the cost of the product in the fine print is a catch most adults are familiar with.

But teenagers don’t think that far ahead.

Free photoshoot? Check. Showing up on set and posing for pictures? Check. Paying to actually keep those pictures … Mum and Dad can take care of that.

When your pubescent child has felt empowered and beautiful for the first time in a long time, are you going to be the parent who stands in the way of their happiness?

While there is no technical obligation to purchase photos, an element of parental guilt comes into play.

Callum argued that the folks he asked to enter the giveaway were already shopping at outlet malls probably didn’t have anywhere between $200 to $1,500 to splurge on buying photos for their child.

Not everyone I spoke to winced when they reflected on their Project Bloom days.

Rebekah Bowling, a Masters student at Victoria University, did a photoshoot with them when she was an “insecure fresher”.

While she expected the experience to be “absolutely cringe”, she ended up feeling “so beautiful and empowered”.

She started working for them a year later, by which time Peter had already bought Project Bloom.

She described Peter as an extremely kind, talented, and caring boss who worked hard to make people feel beautiful in front of the camera.

Project Bloom impeccably captured the zeitgeist of the 2010s.

It gave the people what they wanted and was very ‘of the times’.

The photography style honoured its adolescent models, dressing them in age appropriate clothing and never sexualising them. While that sounds like the bare minimum, our social media feeds today would suggest it's rare to come by (see: Millie Bobby Brown).

The Cover Girl Competition came to an end in 2020.

Peter said Flair Studios were no longer trading under Project Bloom and that its website would be taken down in the next few months.

Pretty soon, Project Bloom will become a relic of a bygone era, preserved only in our memories and our tagged Facebook photos.

Re: has put together a checklist of things to look out for when you fork out for your next bottle.

A recent study by scientists has shown microplastics in human blood.