Hugh Ozumba has been making music since he was four. Better known by his stage name Mazbou Q, the Manurewa-raised artist and producer began with the piano and was a classically trained pianist up until the age of 10. By the end of high school, he was producing music in his own bands.

“My music used to be quite focussed on addressing how wrong things were and how they needed to change. But now my focus is a little bit more on empowering my people,” he says. “I guess I’m kind of writing a story for myself now that I can come back to later in life and be proud of.”

His message of empowerment is already resonating with Black youth in Aotearoa. “After my first EP release show someone walked up to me and was like, ‘Your show was the first time that I was proud to be an African in New Zealand’.”

Mazbou Q has just released his latest single in what has been a breakout year for the United Kingdom born-Nigerian. His new track, Icon Status, is a politically motivated record that touches on issues of racism and civil unrest.

“These vultures, they want to appear black / But none of them actually see that / There's all this smoke if you actually be black / That's why they be keeping they teeth clamped,” is a line that calls out people appropriating black culture without appreciating what people of colour have to deal with in their daily lives.

The video features imagery from the recent uprising against racial injustice in the United States, as well as footage of Mazbou Q speaking at one of the Black Lives Matter marches in New Zealand. With his politically-charged lyrics and attention-grabbing cadence and beats, Mazbou Q continues to ride the wave of African-Kiwi culture that’s grabbing mainstream attention.

“Music for me has been a journey of self-discovery,” he says. “I’ve used music to connect with my own identity, to make sense of a lot of the experiences I had growing up, which were ones of dealing with racism, and understanding myself in a context of a society where I am a minority.”

Previously known as Unchained XL, Mazbou Q says his new music has a different message to what he was making when he first began. Now, the focus is on empowerment and leaving a legacy he can be proud of in the future.

Although he had always dreamed of being a full-time musician, it wasn’t until the age of 28 that Mazbou Q decided to take the plunge, quitting his job as a software engineer.

“I had my degree and had accumulated enough work experience to mitigate the risk of things not working out. I didn’t have any debt, no kids, and I was like ‘alright, now’s the time to give it a go if it was ever going to work,’” Mazbou Q says.

With an exciting visual project on the way and other new tracks in the pipelines, the future is looking very bright and busy for Mazbou Q.

“I think I’m meant to do music. I think I’m fulfilling my purpose... It just feels right.” 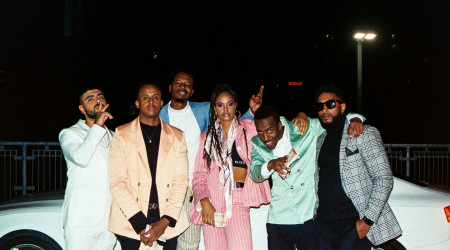