All of New Zealand, except for Auckland, will move to alert level 2 at 11:59pm tomorrow, Tuesday September 7, Prime Minister Jacinda Ardern announced  at the 4pm press conference today.

However, some changes have been made to the level 2 alert levels to combat the higher transmission rates of the Delta variant of this outbreak.

“Delta has changed the game, so to beat it we’ve had to change our game plan too,” Ardern said.

Face coverings are now mandatory at Level 2 inside most public venues, such as shops or inside malls or libraries.  You can take your mask off at bars and restaurants to eat and drink.

“To keep it really simple, if you are out and about inside public venues, please wear a mask,” Ardern said.

Scanning is now mandatory at many venues that require people gathering - some examples of these are bars, restaurants, cinemas, nightclubs, concerts, and churches.

“Essentially places where there is close contact with people, where it is harder to wear a mask, and where the virus can easily spread.”

The limit for indoor gatherings, hospitality and event venues has been lowered to 50 people. Outdoor venues have been limited to 100 people.

Indoor public facilities like gyms, museums and libraries will now have to maintain two meters between people, rather than one meter.

Ardern said arrangements would be made to accommodate Northlanders who need to travel to the rest of the country. Allowing, for example, people from Northland to travel through Auckland for work.

Cabinet will review alert levels again for both Auckland and the rest of the country next Monday September 13.

“We are making progress, but we still have some real challenges ahead,” Ardern said.

“There are still unlinked or mystery cases. These matter because as long as we don't know where a case has come from, we can’t tell if we have other chains of transmission in the community we haven’t isolated yet.”

“If you have cold or flu-like symptoms, we need you to be tested no matter where you are in the country.”

Director General of Health Ashley Bloomfield said there were 4750 swabs processed from around the country, which is the lowest testing day since the outbreak.

“Testing remains central to us being certain that the outbreak is under control. Our most important message today is that if you have any symptoms you must get tested - wherever you are in New Zealand.”

Bloomfield said they would be focussing in the next week to make sure there is no more community transmission of the virus in Auckland. This includes more testing of health and essential workers, and the introduction of testing requirements for the 3000 essential workers who are travelling in and out of Auckland every day. It will be mandatory for these workers to have had a test after 11:59pm on Thursday.

“I know we are asking a lot of Aucklanders at the moment, I understand that additional testing might be inconvenient and unwelcome. But I do want to reiterate how important they are, and that their sole purpose is to stamp out this current outbreak and move Auckland down levels as soon as possible.”

There are twenty new community cases today, all in Auckland.

Five of the cases announced today have possible exposure events, with four new locations of interest added by the Ministry of Health - three pharmacies around Auckland and the Whenuapai Gardens and Orchard.

40 people are in hospital from the virus, six of whom are in the ICU.

There have now been 38,058 close contacts identified from this outbreak and 91 percent have received at least one test.

At 4pm today the Prime Minister will announce any cabinet decisions on alert level changes. 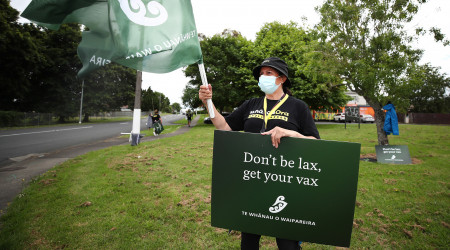