Now that we’re well into Covid alert level 1, we can finally go out and do fun stuff again. This also means the country’s favourite sport is finally back on, where we watch a bunch of beefy, sweaty men tackle each other while trying to grab a ball for 80 minutes.

There is uncertainty around how this year's season will run, but clubs have already jumped at the opportunity to restart training. The NZ Falcons RFC are Auckland’s gay and inclusive rugby union team. They enable people to play rugby in a supportive environment, in a sport where they otherwise may not feel welcome. Arwen Sommer went along to the Falcons’ first training session since lockdown to see how they were getting along. 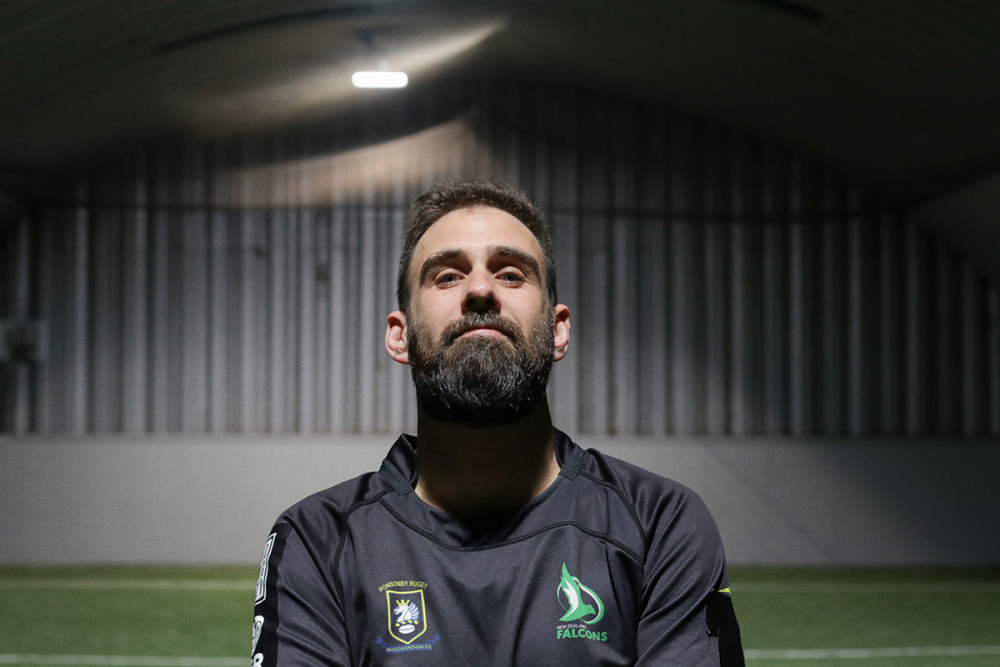 How was the first training since lockdown?

It was really good! It was exciting to get everyone back together again. We are quite big fans of all hanging out. It's very social and fun. It was nice to be all together and have a bit of a run around.

How are you feeling about the season with things being a bit up in the air?

I feel quite good about it. I play in the touch team, which means that we've already had a game last week. We were kind of thrown in the deep end but we did really well. And I think that after playing touch in the summer, we all know each other quite well now, and just have a lot of fun. It's really nice because it's competitive, but there's also a really amazing camaraderie amongst us all which is really supportive. And so for someone like myself, who hasn't played a lot of sport in my life, I found it really easy to fit in because I feel like as long as I give it my best, then I'm going to be okay. 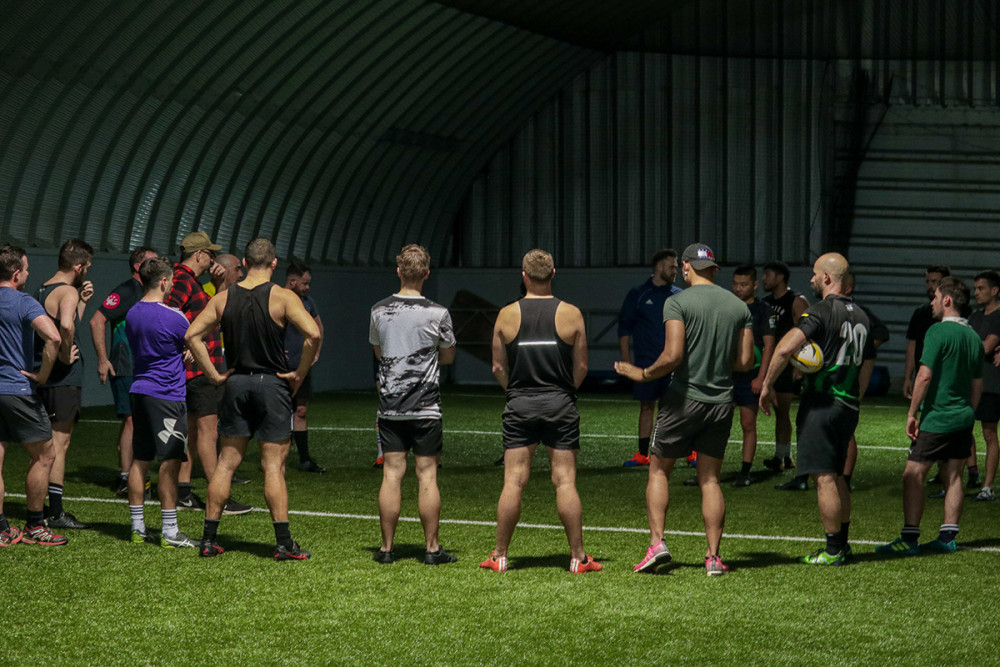 The NZ Falcons at their training at the Ponsonby Rugby Club.

How did you get into the Falcons?

I have lived in Auckland for many years. I've seen them around and I thought to myself, ‘why not push myself out of my comfort zone and meet some new people?’ It's been really nice to meet a whole load of people from all different walks of life, that all have, I suppose, one thing in common and also like doing this, so it's quite fun.

There's such a welcoming vibe that when new people come in, all I want to do is welcome them. Now that I've been here for a little bit, I feel part of the furniture, I'm excited about welcoming new guys into it.

It's kind of scary, rugby's supposed to be this massive masculine macho thing and it's like 'oh, can I do it?' But actually anyone can do it.

Do you have any trouble when you go out for the games? 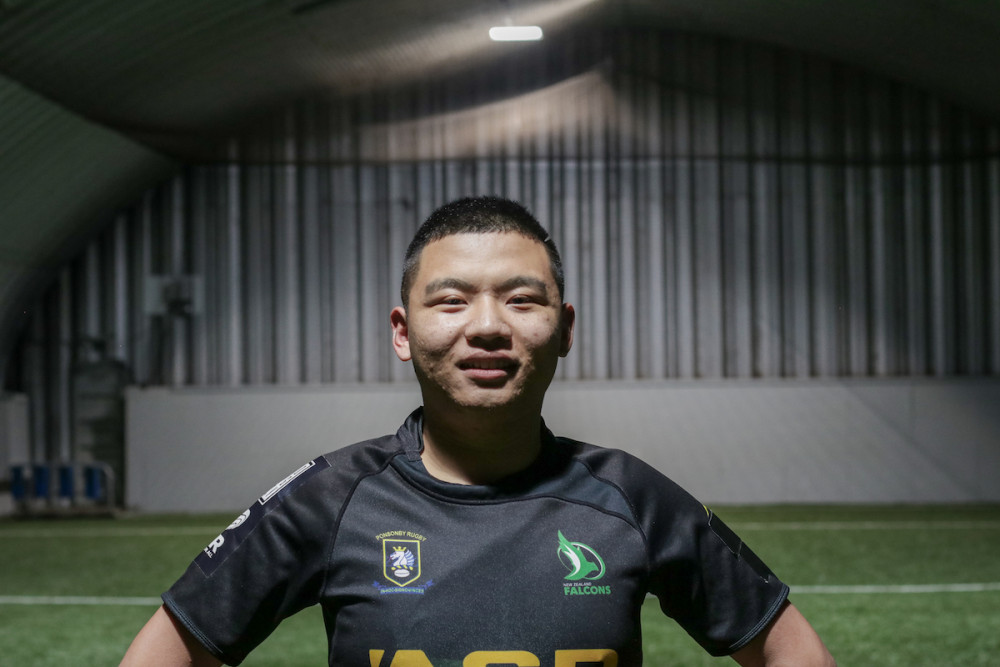 How was the first training?

Every single time after the whole summer break you lose all the skills and drills that you had and just feel that lack of training. So now is a really good start. We know that this year is quite difficult for everyone but we're getting there and we are ready for the first game.

Why did you join the Falcons?

I am a member of the LGBTQ family. At the very beginning, I was thinking about joining the Falcons as a volunteer and I emailed them but they said they don't actually need volunteers they need players. So I joined as just a sideline observer. After the first observation, I decided to jump in and give a try because you hardly ever see a gay Asian man on the rugby field. So I said, ‘Okay, I'll give it a go and see how it turns out’. The experience was great and I enjoyed the team vibe, and the whole team is just very safe and very friendly. It's a very generous experience and I can not say enough to thank the team. 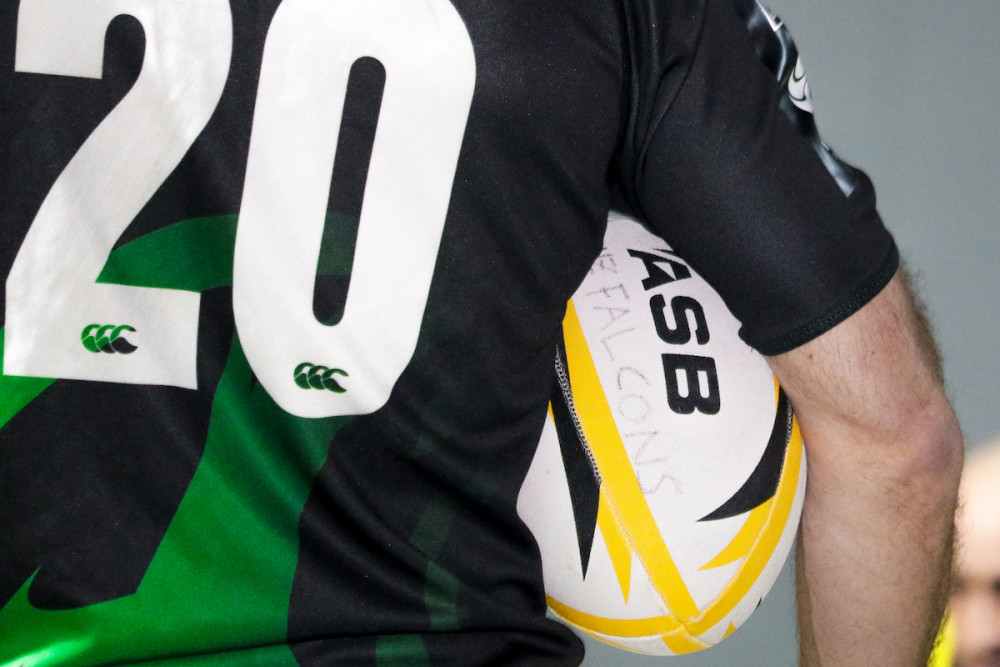 Max Currie with the ball under his arm.

We usually play in senior president and we play with the local union club. So we do move around in Auckland. But usually, we play with other teams with some sort of social level. It's hard, especially since we have a team of people where rugby is not the main part of our life. It's a social experience for us and the level of the team members is quite varied. I do find it fun. 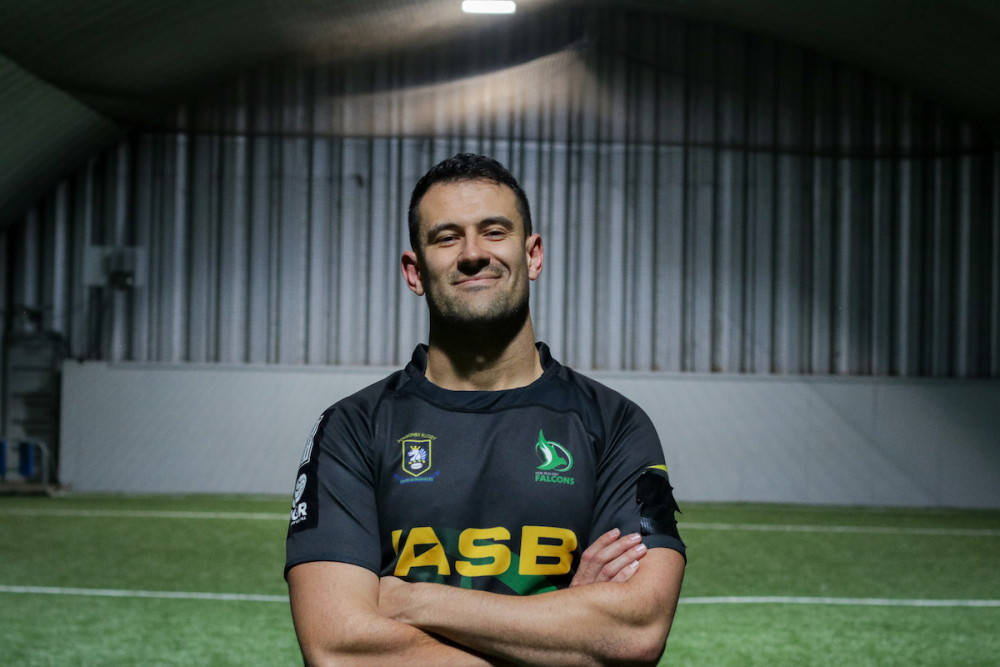 Oh, man, I was so apprehensive! It ended up being a good light introduction, just what it needed to be, really inclusive. I think even those with experience were really worried about some of the skill that we'd lost over time. And there were new people who were coming along for the first time. So we're all in the same boat, wondering whether we were prepared. It was an equaliser and I felt like it was a really good first meet up to just smooth that out and be like, ‘we're in this together guys’.

Do you miss training?

Yeah, I really did. At first, I just wanted to attack the challenge of adapting [to lockdown]. But as time went on, that became really hard. I missed the social aspect of it. I realised I prefer to be active in groups rather than on my own. It started off on a high note but it got old.

How long have you been part of the Falcons?

Oh, god, I think I'm the oldest one in the room. I've been here since 2014. It's an ever-evolving culture. We still try to align with the same values but we learn every season. It’s all about the people. There's not really a top-down definition of what this culture is because it's always player-led.  What is consistent is that we try to make this whanaunga and I think we keep that, but lots of people come and go. It just ebbs and flows like that. 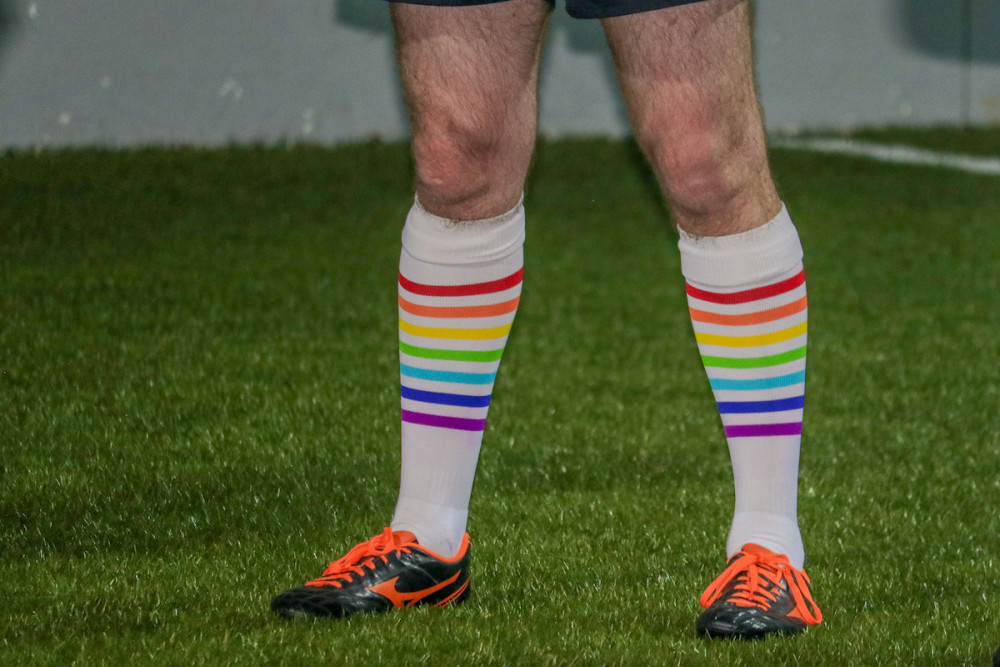 How often do you play games?

We insert ourselves in the local competition in Auckland. We enter the President's grade competition that starts usually around mid-to-late April, in most years, and it would go until mid-to-late August. There are sometimes pre-season and post-season matches that we can arrange with other clubs too.

Do you have any idea when the games are gonna start up again?

It’s finally been announced for our grade. It's all been pending decisions from the levels. That's been announced to start on the 27th of June. And what we don't know yet is how long it's going to go. I think that's going to be a decision to still make because the timing of the season is really important as well.

Are you getting prepared?

We are doing as best we can. It's not a great run-up to a season by any stretch, but we're gonna make do, everyone's going to be in the same boat. I feel like Rugby New Zealand and Ponsonby Rugby are focused on player safety. We've seen in pro rugby that it's been a real challenge to jump into games with such short training. We don't know, but we are definitely prioritising the safety of the players first and just being compassionate to that. We don't have harsh expectations given what's happened. Be smart, don't go hundies from day one because your body's a temple, you're gonna take care of it. Strength comes in cycles. 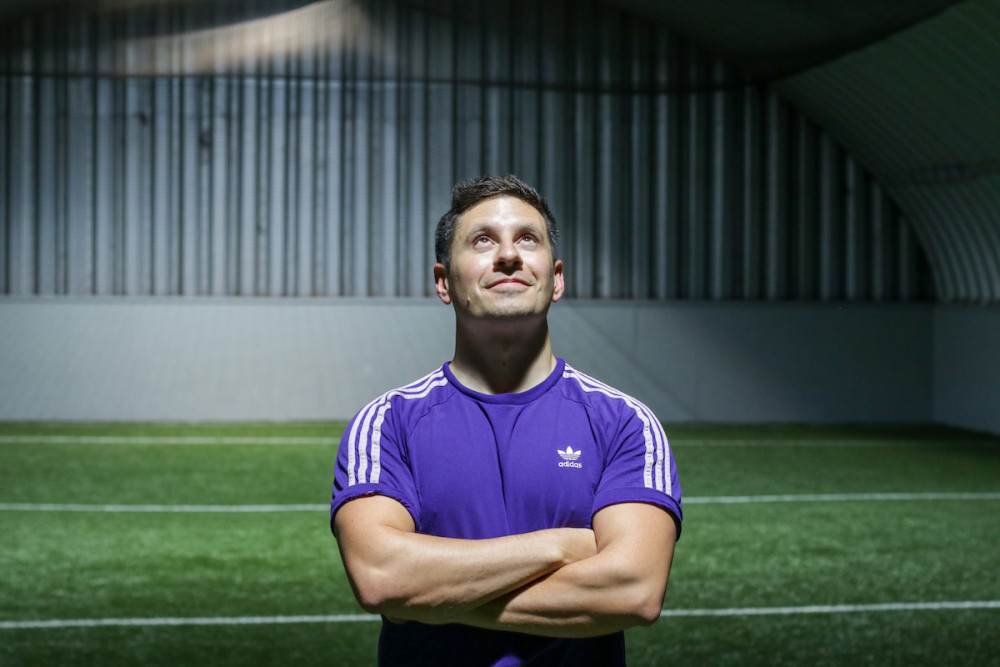 Did you do any training over lockdown by yourself?

Less than I have wanted to. I tried to keep fit by taking a few runs in the park and cycling. But I got a bit bored of it after a few weeks, so I really need to keep up my fitness and get back into it, outside of this. 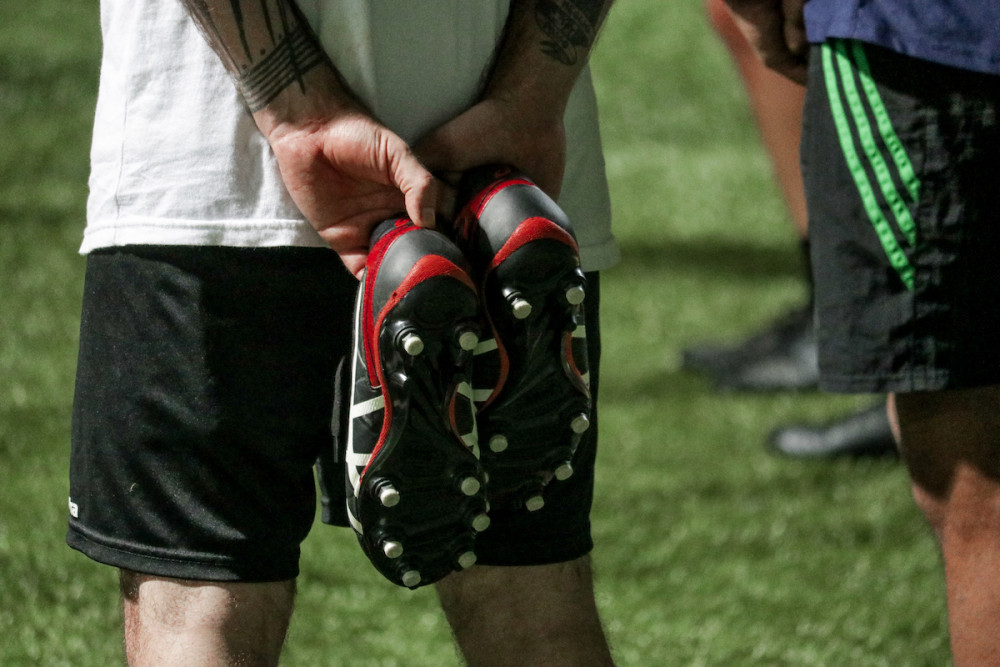 Simone Ziglioli preparing for the training.

Why did you join the Falcons?

I was new to the country last year and I always wanted to join a gay rugby team. And I thought, it's a perfect opportunity. I'm in the city. I don't know anyone. I need a family so I have people to depend on. It's human nature to need a network. And I came here by myself really nervous and found just such an awesome group. I learned about the Māori philosophy of whānau which was completely new to me.

It's been really cool feeling like I have like a family across all of Auckland who I can depend on if I need anything.

I just think it's an awesome team. If we can get more players to come, it will be even better. If someone's reading this, they should just come along to the training, there's no pressure. I had no experience. I'm still learning and the guys will look after you and have your back. 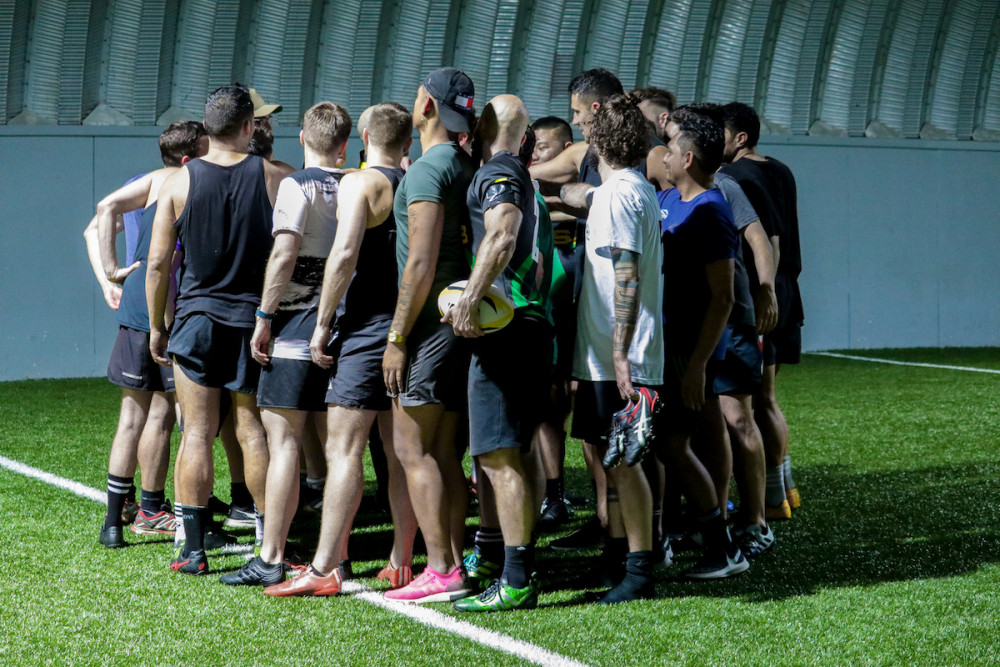 The NZ Falcons wrap up their training.